An sentimental embrace of risk – Humble Student of the Markets

Mid-week market update: When traders refer to “institutions” in the context of sentiment analysis, often the impression is that institutions represent some monolithic entity. Nothing could be further from the truth. I tend to analyze institutional sentiment by segmenting them into four distinct groups, each with their own data sources:

Each group is different and they can behave differently. The first three tend to represent slow but big money, while hedge funds represent the fast and high turnover money.

The differing groups of institutions don’t always agree. Today, however, the US and global institutions all seem to have formed similar views. Institutional investors are bearish on bonds and they are becoming increasingly bullish on stocks, based on a belief that growth is improving.

Under these circumstances, the key question for traders and investors is whether they should jump on bullish equity bandwagon or be contrarian and fade the institutional purchases.

How the surveys are different

Before answer that question, I would first like to examine the data and discuss the pros and cons of each data set. Barron`s Big Money Poll is conducted every six months and the survey is done on a sample of US-based managers. While the survey frequency may not necessarily be to our liking, institutional money is slow money and therefore a semi-annual survey is not necessarily a problem because of the relatively low turnover of this investor group. The main shortcoming of the Barron’s poll is it provides only a snapshot of respondent attitudes, with little history of responses. As an example, we can see that managers are tilted bullishly, but how does that compare to its own history? The BAML FMS is conducted monthly and the sample size is broader and it is composed of managers with a global outlook. There are many non-US managers in that survey. The questions tend to cover global issues and not just US domestic ones. A comparison of the responses between the Barron’s Big Money Poll and the BAML FMS can be revealing as foreign and US managers don’t always agree. Unlike the Barron’s poll, the BAML FMS does provide a history of responses, which can be useful as it gives us an idea of whether managers are in a crowded long or short position. However, the published questions are not always consistent from one month to the next. As an example, the September report showed the equity positioning of hedge funds was an extreme. What happened next? The October report gives no details. 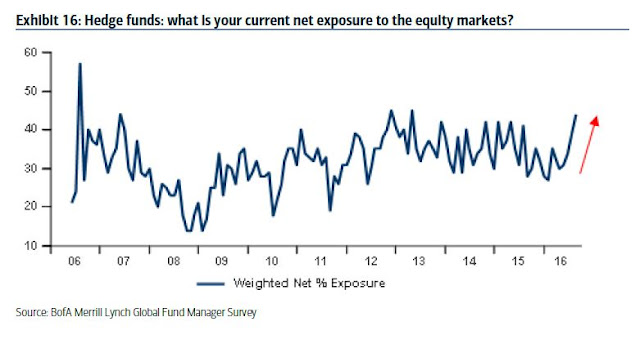 By contrast, the NAAIM survey is conducted on a weekly basis and the sample are RIAs who manage retail accounts. The NAAIM survey only asks a single bull vs. bear question and lacks the depth of the other surveys, which asks questions about macro-economic issues and asset and sector preferences. As the chart below shows, the NAAIM data (bottom panel) has tended to be more useful as a buy signal when RIAs are panicked (vertical blues lines) than as sell signals when RIAs are complacent (grey areas). Currently, RIAs have been ramping up their equity exposure from the January market bottom but readings are not extreme yet. 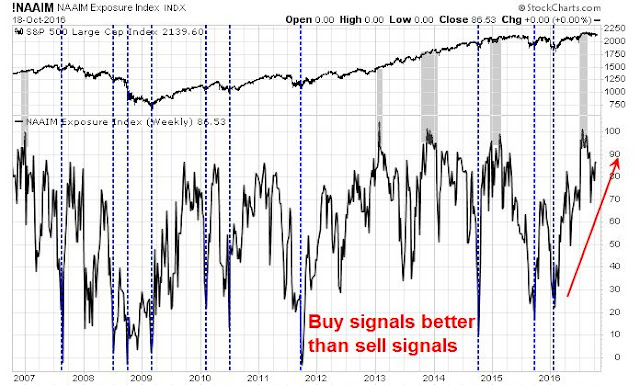 The one characteristic that stands out from both the Barron’s and BAML surveys is a high degree of bond market bearishness. I have seen some analysts point to the high level of cash from the BAML FMS as a sign of cash on the sidelines waiting to go into the stock market, but that is a misinterpretation of the data. 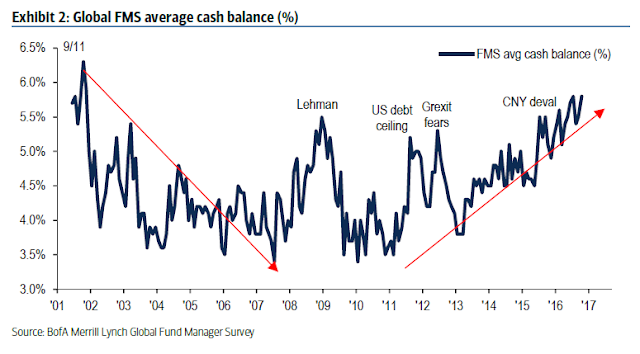 Even though cash levels are high, equities are roughly at neutral weight. 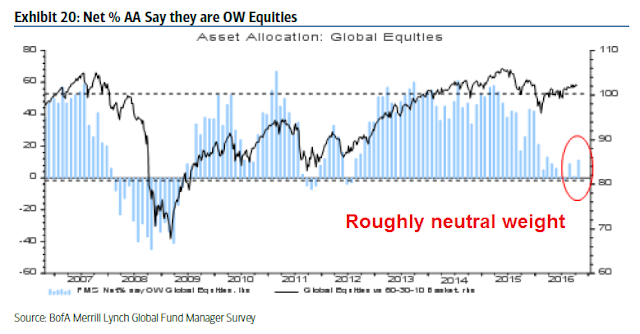 Cash is high because funds have come out of the bond market. 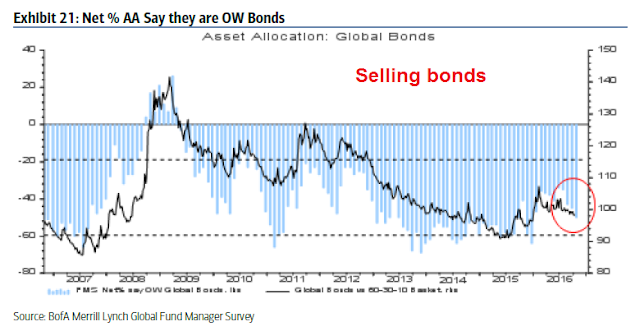 We are seeing a similar level of caution in the Barron’s Big Money Poll. In effect, institutions are becoming more cautious on the bond market in anticipation of Fed action to raise rates because of a better growth outlook, 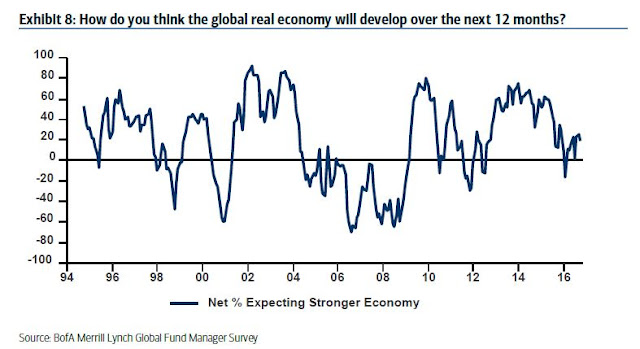 Barron’s is showing a similar response. 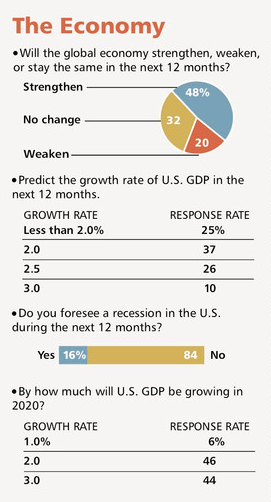 Managers are starting to raise their risk appetite because of their better growth outlook. Overall positioning shows an underweight in risky assets. 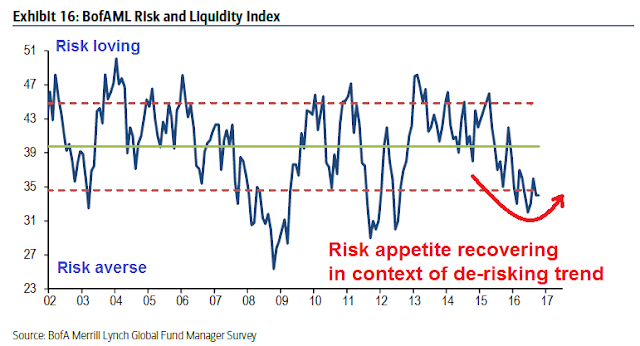 We can see similar hints of rising risk appetite from the Barron’s Big Money Poll. Barron’s reported that bullishness increased from record low levels, which suggests that managers are far from a crowded long position [emphasis added]: “Our latest poll finds 45% of respondents bullish or very bullish about the market’s outlook through the middle of 2017, up from the spring poll’s record-low tally of 38%.”

The BAML FMS shows that managers are slightly underweight in US equities. 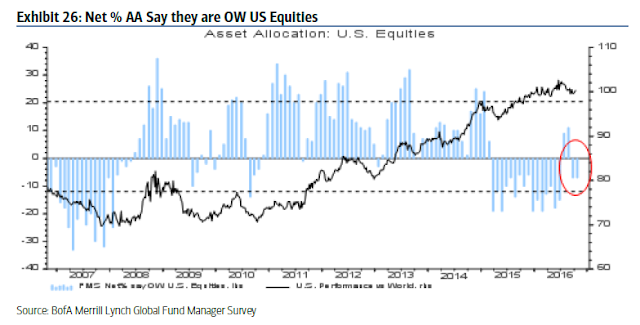 The magnitude of the bullishness in the Barron’s survey appears to be relatively modest. Managers believe that the SPX will only appreciate 7% to June 2017 and a further 3% to December 2017. A one-year expected return of 10% on the stock market doesn’t seem like wild bullishness. 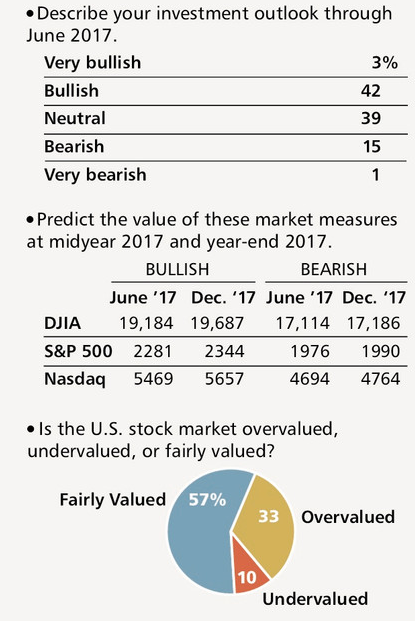 If we get an upside growth surprise, the potential for a FOMO melt-up is high (see Q3 earnings season: Stud or dud?). Equity weights within balanced portfolios are still low by historical standards. 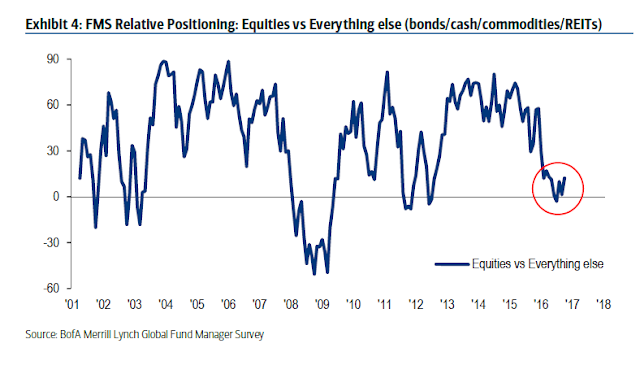 No review of sentiment models would be complete without an understanding of hedge fund and individual investor positioning. The picture on the fast money is mixed. On one hand, COT data from Hedgopia shows that large speculators, or hedge funds, have moved from a net long to net short position in SPX futures. 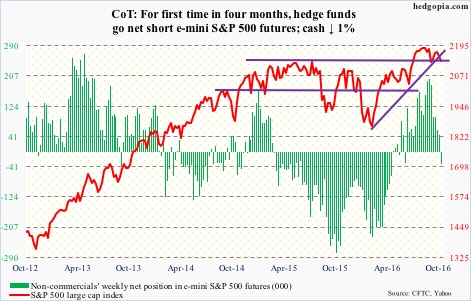 On the other hand, large speculators remain in a crowded long in high-beta NASDAQ futures. 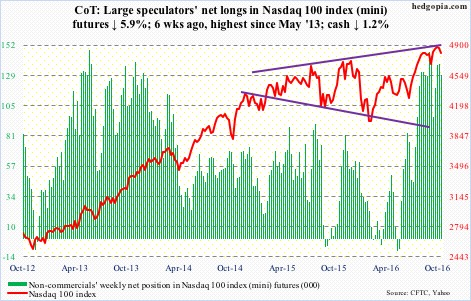 Option sentiment isn’t giving a clear picture either. The term structure of the VIX is showing a neutral reading, somewhere between extreme fear and complacency. Individual investors and traders appear to be similarly confused. Both the AAII and Rydex are in neutral, with a slight bearish tilt, which is contrarian bullish. These readings could be interpreted bullishly given the market is very close to its all-time highs. 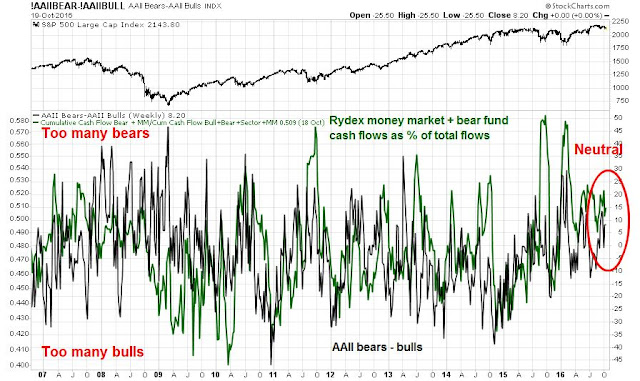 The TD-Ameritrade Investor Movement Index, which surveys the aggregate actions of its account holders, shows a pattern similar to NAAIM. Individual investors have been buying the market since the January bottom, but readings are not at an extreme level yet. 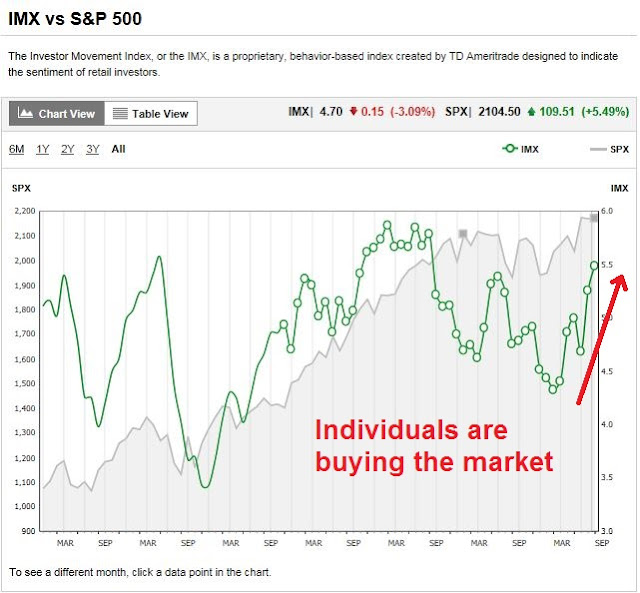 Sentiment analysis is showing that investors of all stripes are starting to embrace the idea of renewed growth. Risk appetite is growing, but portfolio positioning are nowhere near crowded long extremes yet. The fast money traders have been quick to jump on the developing bullishness, but have pulled back their exposure a bit as the market has consolidated sideways.

We are in a holding pattern, but if the positive macro momentum were to continue, there is plenty of room on the bullish bandwagon.

7 thoughts on “An sentimental embrace of risk”