If Deutsche = Lehman, then Greek banks = ? – Humble Student of the Markets

Readers of a certain age will recall the immortal line of late Gilda Radner as “Rosanna Rosanna Dana” in Saturday Night Live, “It’s always something!”

Two weeks ago, the market was worried about the uncertainties posed by presidential debate. Last week, it was Deutsche Bank. This week, my market commentary will focus mainly on a tail-risk scenario of a Deutsche Bank sparking a European banking crisis.

To recap, the markets got spooked by continuing concerns over the financial health of Deutsche Bank (DB). The worries sparked a number of comparisons with the failure of Lehman Brothers, which sparked the Great Financial Crisis of 2008 (chart via Zero Hedge). 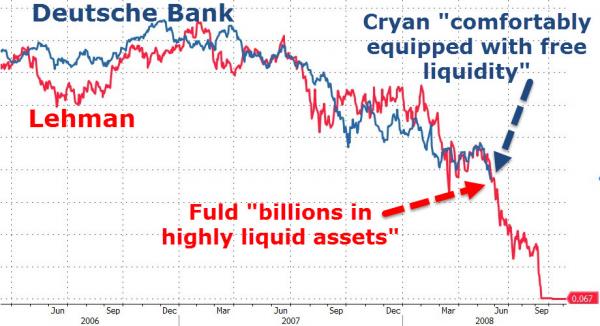 If you are still worried about DB, then consider the following: If Europe didn’t allow the Greek banks to topple during the last couple of Greek financial crises, would it allow a systemically important bank like DB to fail? If you accept the Deutsche as Lehman analogy, then what would that make Greek banks?

I start my analysis with a brief banking primer for the newbies. The chart below shows an idealized balance sheet of a bank. A bank takes in deposits and pays its depositors interest, which form the liabilities of the bank’s balance sheet. On the asset side, it invests the deposits into loans and other instruments, and maintains a prescribed level of Tier 1 capital. Typical Tier 1 capital consists of common equity, preferred equity, and contingency convertible (CoCo) bonds that collectively act as loan loss buffers. 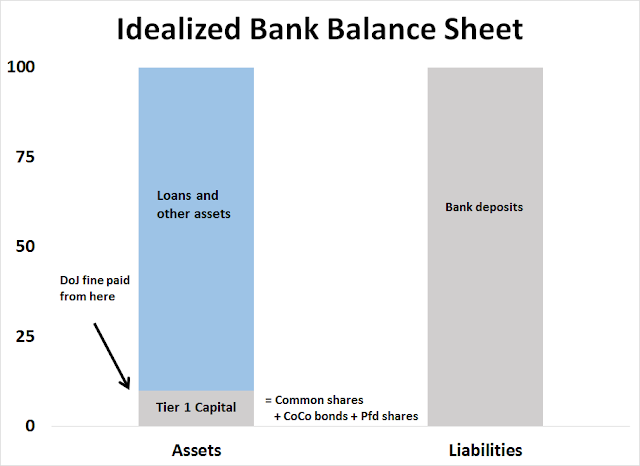 Now imagine that all of a sudden, depositors panic and ask for their deposits back from the bank. The loans that the bank has out are not very liquid and therefore it cannot quickly get the funds to pay back its depositors. That is what we call a liquidity crisis, or a bank run. The bank could then either ask other banks for short-term overnight loans to deal with liquidity shortfalls, or, as a last resort, ask the central bank for loans. That’s why the central bank is known as the lender of last resort.

On the other hand, if the bank suffers a large loss in the form of the default of a large borrower and it does not have enough financial cushion to offset that loss, then it suffers from a solvency crisis. In that case, the bank would either have to either find new capital, merge with a strong partner that has sufficiently large buffer, or go insolvent, where the shareholders get wiped out to zero and depositors may not get all of their money back.

Central bankers understand the mechanisms of liquidity crises well and they have built mechanisms to deal with such emergencies. Flooding the banking system with overnight loans can solve liquidity problems, but they cannot address solvency problems.

What happened to Deutsche Bank?

The concerns over DB is a potential solvency problem, not a liquidity problem. The market was spooked when DB management put out a statement indicating that the bank could be on the hook for up to $14 billion for past wrongdoings in the mortgage market:

Deutsche Bank AG (XETRA: DBKGn.DE / NYSE: DB) confirms that it has commenced negotiations with the Department of Justice in the United States (“DoJ”) with a view to seeking to settle civil claims that the DoJ may consider in connection with the bank’s issuance and underwriting of residential mortgage-backed securities (RMBS) and related securitization activities between 2005 and 2007.

The bank confirms market speculation of an opening position by the DoJ of USD 14 billion and that the DoJ has invited the bank as the next step to submit a counter proposal.

Deutsche Bank has no intent to settle these potential civil claims anywhere near the number cited. The negotiations are only just beginning. The bank expects that they will lead to an outcome similar to those of peer banks which have settled at materially lower amounts.

The proposed $14 billion settlement was a shocker. It also raised potential solvency concerns for investors. As these charts from Bloomberg shows, DB’s capital adequacy was a bit low compared to other major banks, as measured by Tier 1 capital. 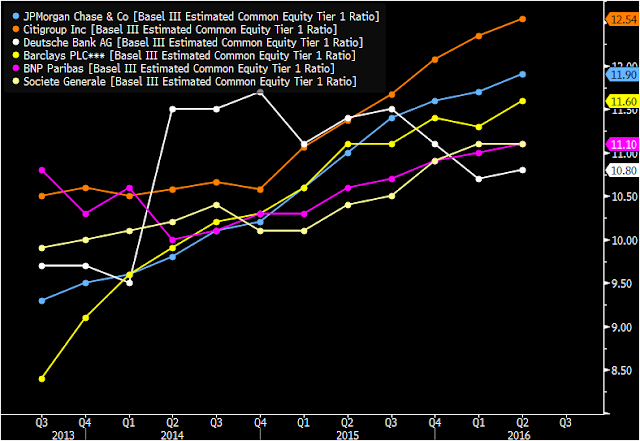 In addition, leverage is higher than other major banks. 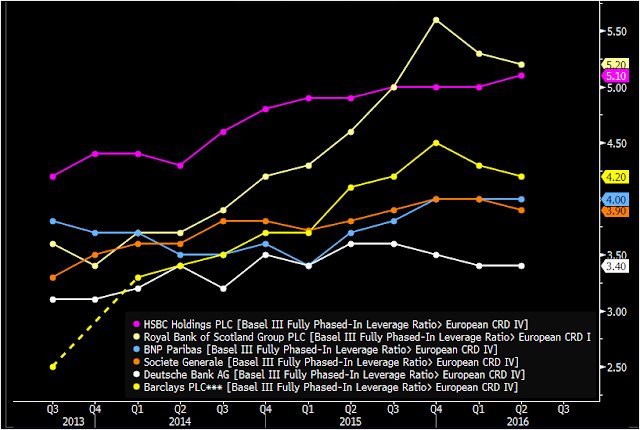 It didn’t help matters when the German government stated that it saw “no grounds” for a state sponsored rescue of DB. In addition, DB CEO John Cryan said in a newspaper interview that raising capital “is currently not an issue,” and accepting government support is “out of the question for us.” Much of Berlin’s statement was political posturing. The idea of rescuing German banks is not popular with the German public. Moreover, it could hardly consent to helping DB when it came out against Italy rescuing Italian banks. When the news hit the tape that a number of hedge funds withdrew their excess cash from their DB prime brokerage account last week, panic ensued and DB’s share price tanked as fears of a bank run spread.

Despite the concerns over a DB potential solvency crisis (and I would underline the word “potential” as the $14 billion figure represents only a proposal), there were no signs of a liquidity crisis at DB or anywhere else in Europe. The latest report from the European Central Bank shows that the banking system tapped the central bank for a measly €14 million in overnight loans. 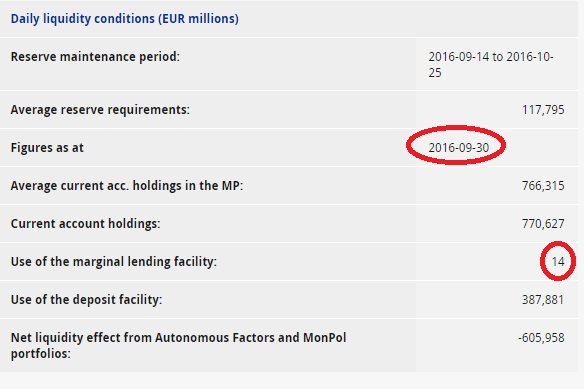 In addition, financial contagion fears were well contained. Sure, the cost of insuring against the default of DB debt had spiked, but fear levels were not spreading into the global banking system. 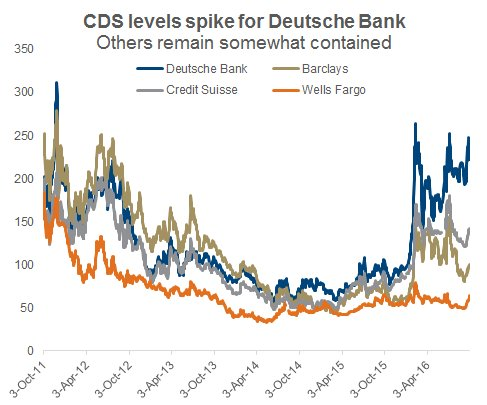 Even at the height of the panic, European financial equities appeared to be tracing out a relative performance bottom. Such market action indicates that market fears over DB had not substantially spread into the rest of the financial sector.

When the news broke that DB was nearing a compromise where the DoJ fine is going to be reduced to $5.4 billion from $14 billion, the share price surged.

Apocalypse postponed? Yes, but this episode does illustrate the fragility of the European banking system. European banks haven`t cleaned up their balance sheet since the Great Financial Crisis. Leverage ratios of 30x to 50x make them highly vulnerable to unexpected shocks like these.

In the absence of tail-risk…

In the meantime, the US macro outlook appears to be constructive. Markit flash Composite PMI, which includes both manufacturing and services, has been rising at a measured pace. 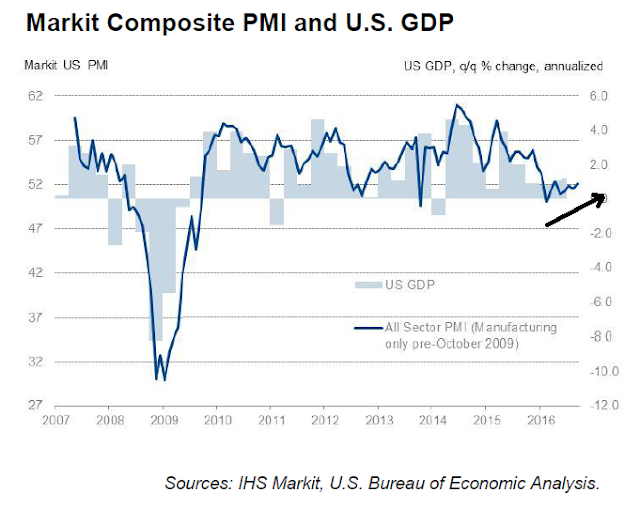 The job market continues to improve. As the chart below shows, initial jobless claims (blue line, inverted scale) has shown itself to be inversely corrected to stock prices (red line). 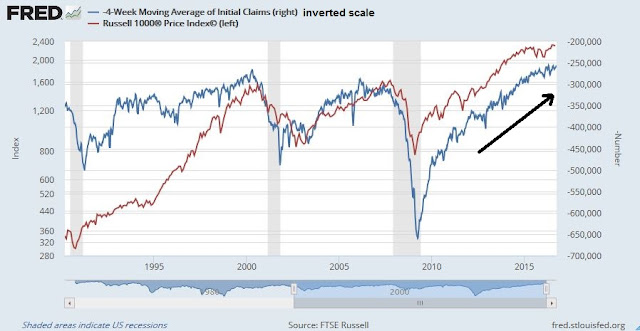 The labor market recovery is showing signs of broadening out beyond the well educated cohorts. 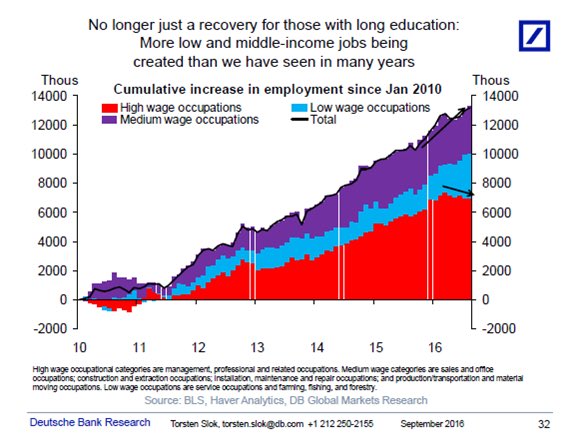 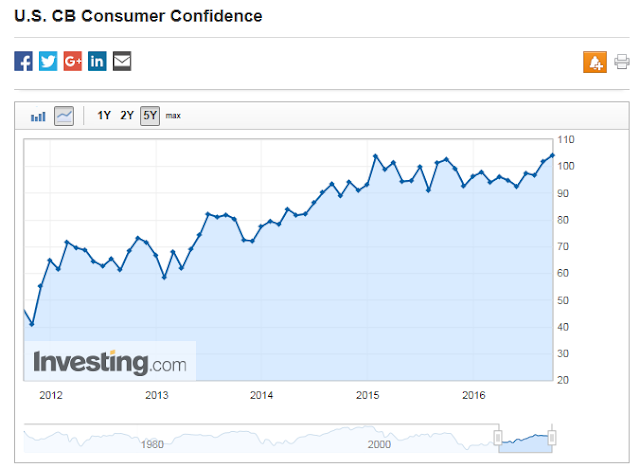 Even though manufacturing data has been a bit soft, Bill McBride at Calculated Risk identified a silver lining in that dark cloud. McBride observed that the Chemical Activity Barometer has been rising. In the past, such strength has foreshadowed better industrial production in the near future. 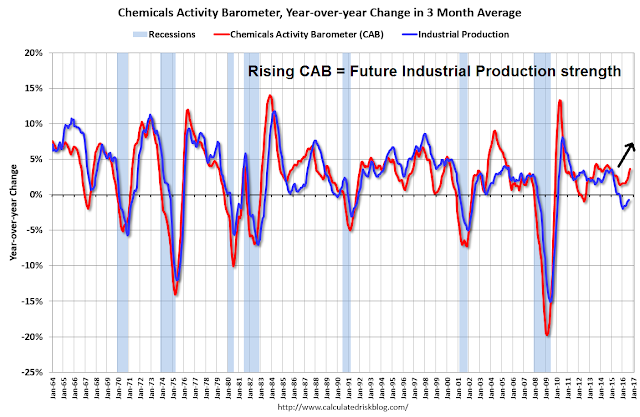 From a bottom-up perspective, the latest weekly update from John Butters of Factset shows that forward 12-month EPS continues to rise and the negative earnings guidance rate is below its historical average. This suggests that Q3 earnings season should beat aggregate Street expectations, which is bullish. 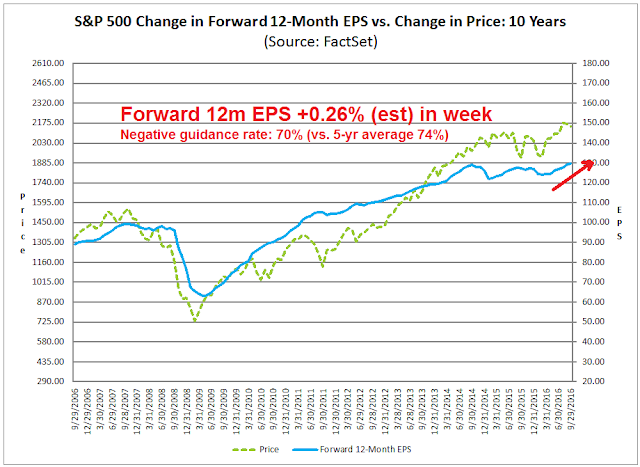 Callum Thomas confirmed my beliefs about likely positive surprises from Q3 earnings season. He observed that the ECRI Weekly Leading Growth Indicator tends to lead forward earnings growth. If the past is any guide, earnings growth should start to surge soon. 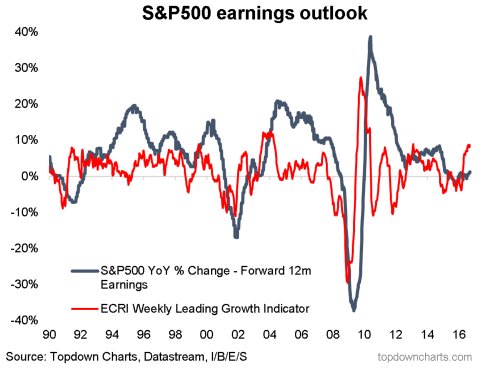 The Wilshire 5000 Index has flashed a bullish MACD crossover buy signal based on monthly data. 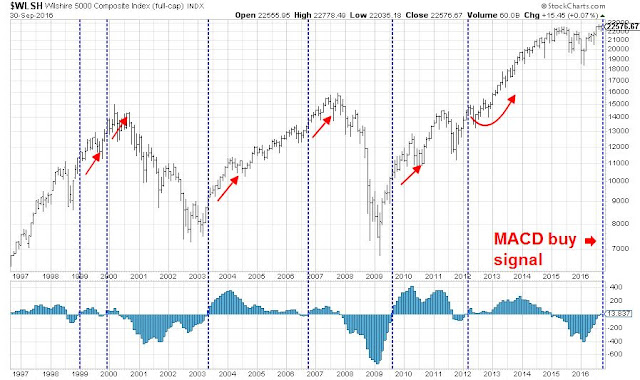 In summary, the status quo market outlook looks bright – in the absence of tail-risk.

The week ahead: Bullish tone, but volatile

In spite of the bullish tone of the intermediate term trend, the market may see some choppiness in the week ahead. Firstly, the DB situation is not fully resolved. CNBC cautioned on Friday that, despite the bullish news about the reduced fine, the $5.4 billion figure remains speculative and unconfirmed by the company:

If the number was correct, under German capital market rules Deutsche Bank would be required to confirm the amount by now. Its failure to do so indicates the number is not correct. Any eventual settlement, however, would almost certainly be well below the reported $14-billion opening bid by the Department of Justice in its talks with Deutsche.

Deutsche Bank is not publicly commenting on the supposed $5.4-billion figure.

Even if the $5.4 billion figure is correct, Holger Zschaepitz at Die Welt pointed out that JPM estimates that DB would be inadequately reserved. 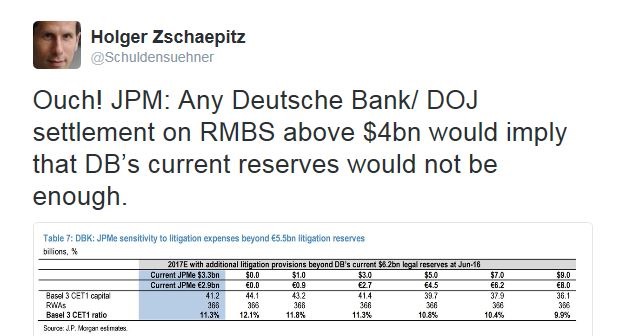 In addition, the latest short-term breadth statistics from IndexIndicators shows that DAX index to be nearing an overbought level and therefore may be vulnerable to a pullback. However, longer term breadth indicators are still neutral and therefore the market may have more room to run to the upside after any market pause. 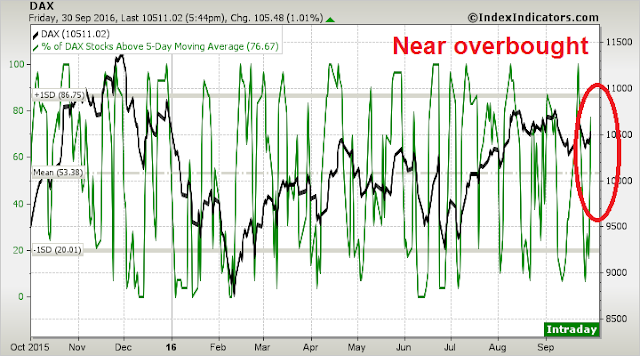 The SPX is also nearing a key resistance zone and may encounter difficulty overcoming those levels in light of the event-driven volatility from Q3 earnings season, the potentially market moving September Jobs Report on Friday, the next presidential debate next Sunday, and heightened earthquake risk in southern California. 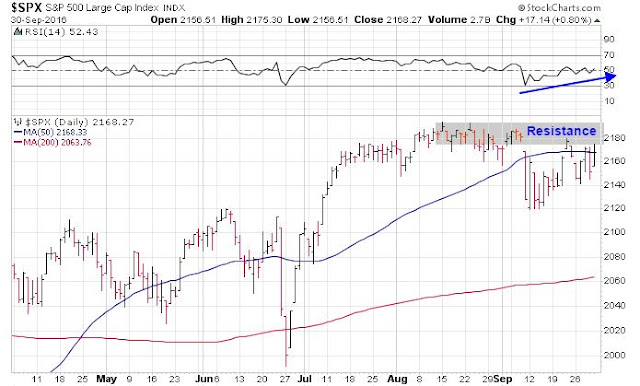 As well, LPL Research pointed out that the market is in the middle of a period of high seasonal volatility. 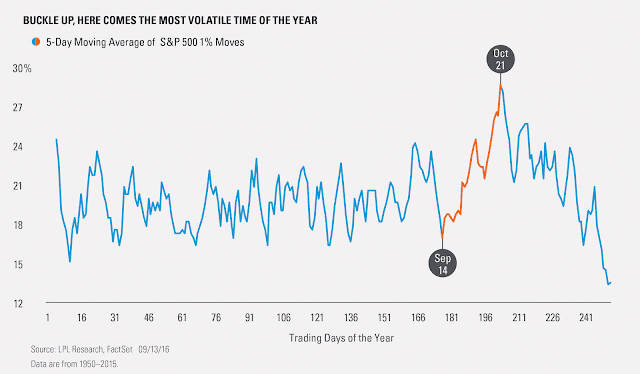 My inner investor remains bullish on stocks. My inner trader is cautiously bullish and he is keeping some powder dry in preparation for the inevitable dips in the days ahead.