Dangerous over-valuation, or a New Era? – Humble Student of the Markets

Business Insider recently featured a chart from Vanguard Group founder Jack Bogle, who observed that the market cap to GDP ratio has become highly elevated to its own history starting about 1996. You might recall that the market cap to GDP ratio was also said to be one of Warren Buffett’s favorite equity market valuation metrics, though he has been silent on the issue for a number of years. 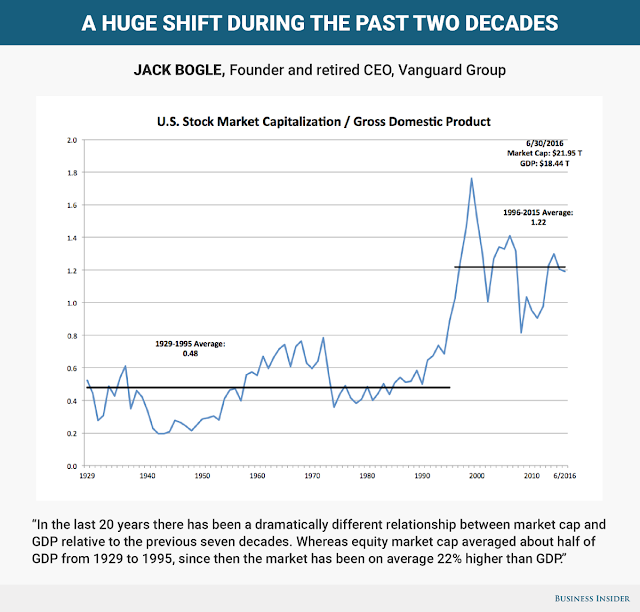 What’s going on? Has the stock market become dangerously overvalued, or is this a New Era?

The market cap to GDP ratio is really shorthand for a simplified aggregate price to sales ratio for the stock market. Most investors value stocks based on the price to earnings, or P/E ratio, which can be expressed as:

I went to FRED and charted the best approximation of after tax net margins, after-tax corporate profits to GDP. As the chart below shows, this ratio was range bound from 1947 to about 1994, when it began a secular rising trend. 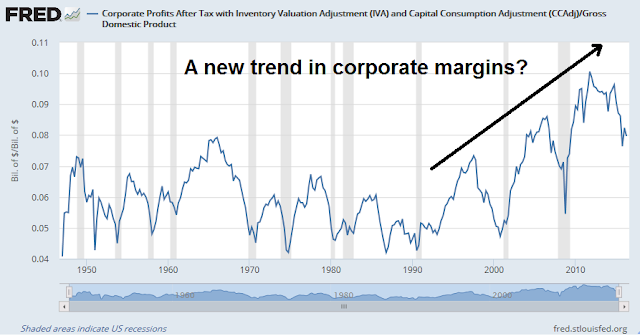 In other words, price to sales ratios are elevated because net margins have risen. The question for investors then becomes whether the rise in net margins is sustainable. Here, we have to distinguish between the secular and cyclical effects of the change in net margins. The secular trend can be explained by some old BAML analysis from 2014 (via Business Insider) showing that the rise in net margins was mainly attributable to lower interest expense (thank you, Federal Reserve) and lower tax rates (think Apple and tax inversion schemes). 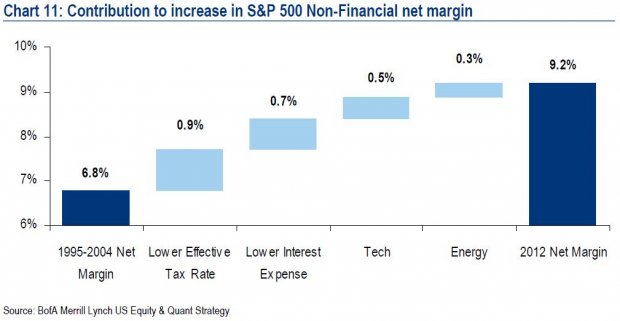 On the other hand, Corporate America is operating in an economic environment where the labor market is at or near full employment. That’s when the cyclical effects are coming into play. The Atlanta Fed’s wage growth tracker shows steadily rising wage pressures, which will act to squeeze operating margins. 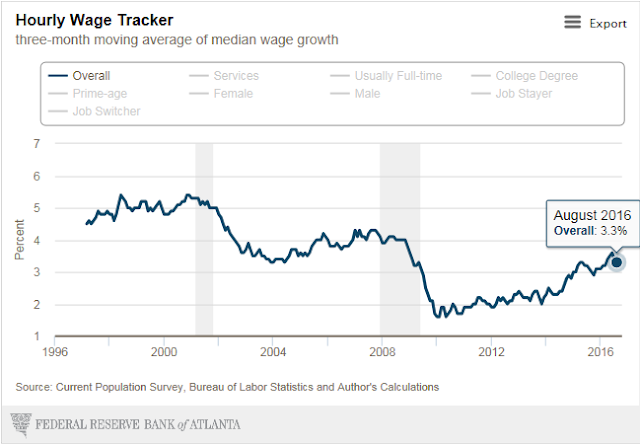 A survey of Avondale’s earnings call digest also reveals rising concerns over wage pressures on operating margins. Here is an excerpt from the 30-Sep-2016 digest:

Homebuilders continue to see tight labor markets
“there’s been very tight labor conditions across the country…we’ve had instances in some of our divisions where some contractors are coming back to us and basically saying they’re going to have to work over time with their folks or that they’re going to need to see some price increases in order to stay on the job.” —KB Home CEO Jeff Mezger (Homebuilder)

“Land is expensive. Land is hard to come by. People are expensive and hard to come by. It’s hard to grow operations efficiently and effectively at an accelerated rate in a market where land and labor is really constrained.” —Lennar CEO Stuart Miller (Homebuilder)

Bed Bath and Beyond is seeing wage pressure
“we believe payroll and wage pressure will continue. We’re not immune to it; it’s impacting our broader workforce including all of retail. It’s also something that we’re seeing…a more than one year impact that there are scheduled increases…for multiple years out” —Bed Bath and Beyond CEO Steven Temares (Home Goods)

Wage inflation is above 2% and the decline in food prices is moderating
“I think given the wage pressure, it’s probably slightly above the 2%…I mean, labor is — as Brian mentioned, we’re anticipating between 4% and 4.5% in the second half within that range also in the first half. So it’s a little more and [with] some reduced reduction in cost of sales on the food side, the margin side gets a little harder.” —Dave and Busters CEO Stephen King (Restaurant)

To circle back to the original question of whether the elevated market cap to GDP ratio represents a New Era, the answer is a qualified yes. However, investors should be aware of the rising cyclical headwinds that are likely to pressure operating margins in the near future.

5 thoughts on “Dangerous over-valuation, or a New Era?”