Mid-week market update: Did you think that a market bottom was going to be this easy? I got worried on Monday when I received several congratulatory messages and high-fives for my weekend tactical bullish call (see Macro weakness: Just a flesh wound?). That rebound seemed a bit too easy. especially when I saw the latest research report from JPM derivatives analyst Marko Kolanovic.

Forget about the usual explanations about rising bond yields, uncertainty over Fed actions or the credibility of the ECB, BoJ, etc. Kolanovic advanced a positioning explanation the market turmoil (via Value Walk):

The stock market needs to move only 1% to 2% lower for volatility to dramatically increase to the downside, as highly leveraged strategies could engage in mechanical selling.

“Given the low levels of volatility, leverage in systematic strategies such as Volatility Targeting and Risk Parity is now near alltime highs,” Kolanovic wrote. “The same is true for CTA funds who run near-record levels of equity exposure.”

When markets are pushed to extremes, the snap-back to normalcy can be hard. Kolanovic notes that record leverage in these strategies could push the market lower and volatility higher. The market might not even need a catalyst to increase volatility, seasonality in September and October could do the trick. When the systematic strategies start to deleverage nearly $100 billion in assets could be pulled from the stock market, Kolanovic projected.

In other words, a number of algo driven strategies, such as CTAs and risk parity funds, got into a levered crowded trade during the period of low volatility. The sell-off on Friday was the trigger for an unwind of that trade. According to Kolanovic, it could be very ugly.

There is some good news and bad news for the bulls. The good news, according to this Dana Lyons historical study, suggests that downside risk is limited at current levels. The bad news is the market is likely to be choppy and volatile for the next few weeks. 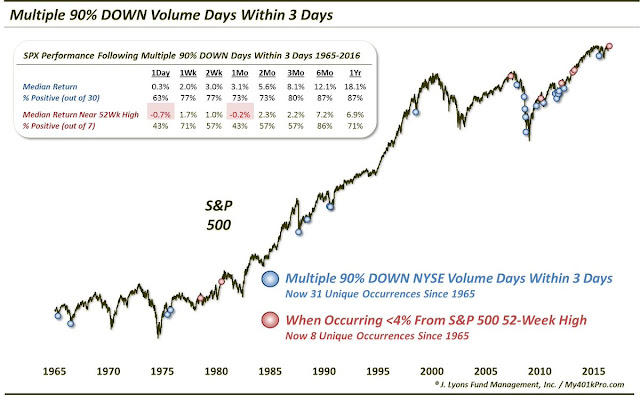 With that trading environment in mind, I can offer traders a couple of near sure-fire ways of spotting market bottoms.

I have written about the Zweig Breadth Thrust before (for an explanation see A possible, but rare bull market signal). The key isn’t so much realizing the full ZBT buy signal, but watching for the oversold condition that sets up a possible ZBT signal.

We don’t have a ZBT setup yet, but this is a relatively rare oversold signal to watch for. The ZBT Indicator will signal a setup when it fall below 0.40. As stockcharts.com can be sometimes slow in updating their data, I use the bottom panel to calculate an approximation for the ZBT Indicator. For readers who want to follow along at home, please use this link to get an update of the chart below. 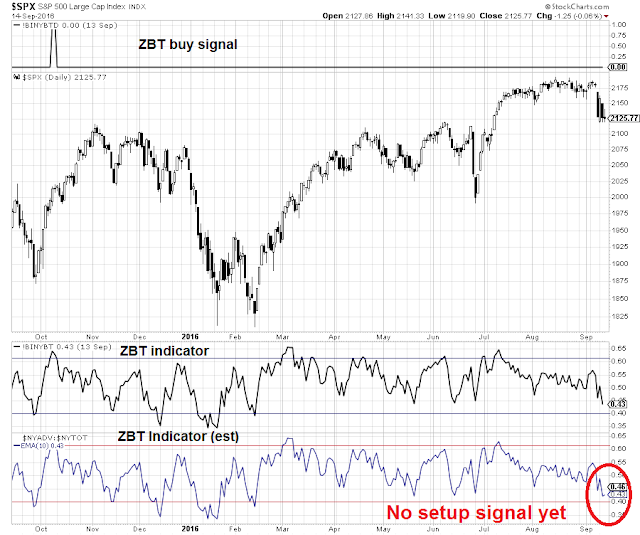 I have also written about my Trifecta Bottom Spotting Model, which has shown an uncanny 88% success rate in the last few years (for a full explanation use this link). The last time this signal was triggered, it managed to pick the exact day of the bottom on the Monday after the Brexit panic (see Hitting the Brexit trifecta).

As a reminder, the Trifecta Model is based on the following three elements:

As the chart below shows, the VIX/VXV ratio is below 1 and therefore not inverted, indicating extreme fear. However, TRIN did spike to 3.17 on Tuesday, which is indicative of the kind of price insensitive selling consistent with Marko Kolanovic’s thesis of large scale portfolio re-positioning. The OBOS model is nearing an oversold reading, but not yet. 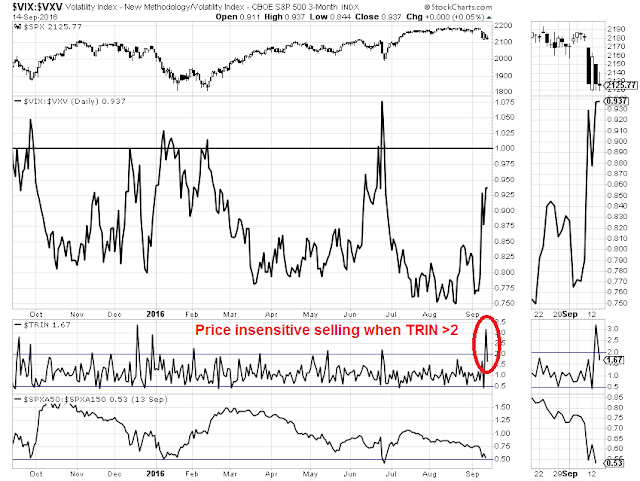 For readers who would like to follow the progress of this model at home, please use this link. I would point out that stockcharts.com does not update the elements of the OBOS model on an intraday basis, but there is a quick-and-dirty fix to that. You can approximate the OBOS by estimating its elements. First, IndexIndicators.com does offer temporary time-delayed updates of stocks above their 50 dma. 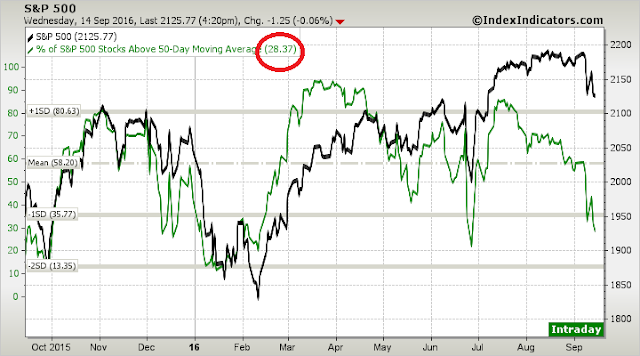 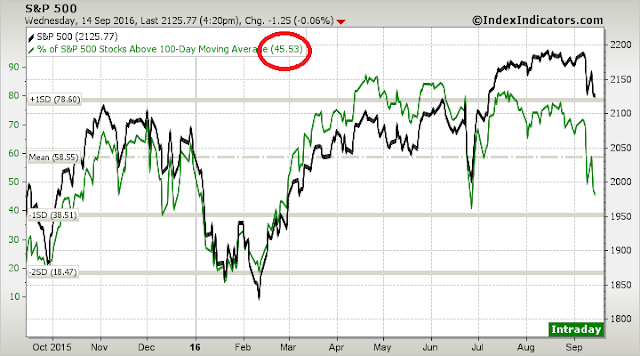 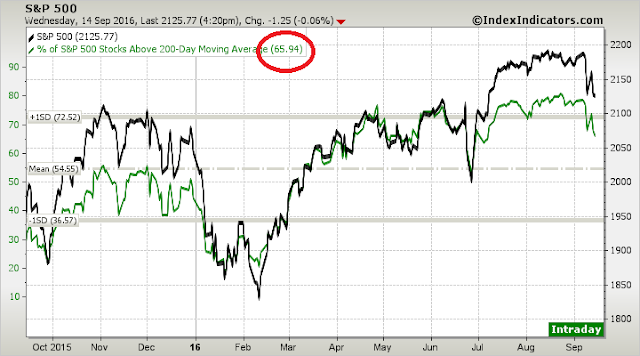 Based on Wednesday’s closing figures, we arrive at a OBOS model reading of 0.53, which is unchanged from Tuesday.

Where are we now?

In closing, the market appears to be short-term oversold on many breadth metrics, such as stocks above their 10 dma. 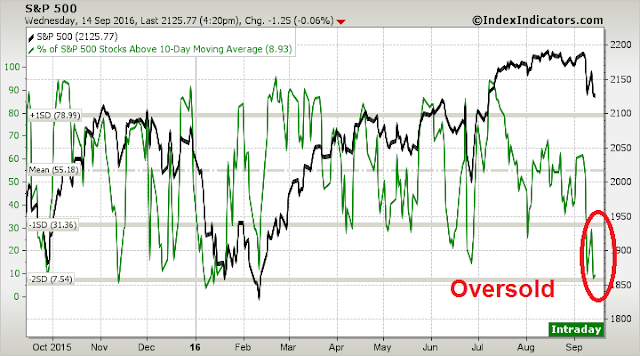 In addition, there was a positive RSI-5 divergence and a minor RSI-14 divergences when the SPX tested a key support level. Based on these readings, the risk-reward is skewed to the upside. 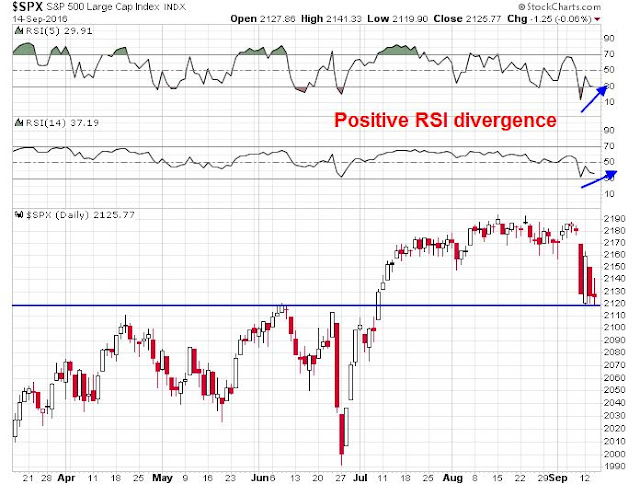 However, the unwind that Kolanovic postulated may not be complete. My inner trader is keeping his long position and watching for signs of a capitulation and market washout based on my aforementioned indicators before he uses his remaining cash.