The Trump Arbitrage Trade – Humble Student of the Markets

The reaction to Donald Trump`s speech to the Republican convention has been highly bifurcated. Mainstream media and analysts mostly reacted with horror and raised cautionary notes about his campaign of fear (see The New York Times and The Economist), while social media lit up with “I would totally vote for this guy” messages. 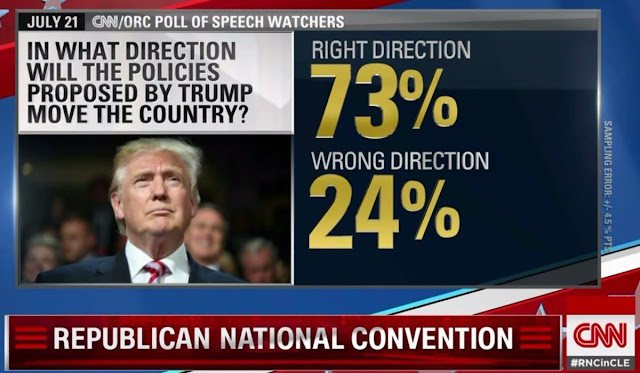 To be sure, Trump’s speech was extremely dark in tone for the presidential candidate of any major party. Here are some key excerpts that painted a picture of a failing America:

Homicides last year increased by 17% in America’s fifty largest cities. That’s the largest increase in 25 years. In our nation’s capital, killings have risen by 50 percent. They are up nearly 60% in nearby Baltimore…

The number of police officers killed in the line of duty has risen by almost 50% compared to this point last year. Nearly 180,000 illegal immigrants with criminal records, ordered deported from our country, are tonight roaming free to threaten peaceful citizens.

The number of new illegal immigrant families who have crossed the border so far this year already exceeds the entire total from 2015. They are being released by the tens of thousands into our communities with no regard for the impact on public safety or resources…

Household incomes are down more than $4,000 since the year 2000. Our manufacturing trade deficit has reached an all-time high – nearly $800 billion in a single year. The budget is no better.

President Obama has doubled our national debt to more than $19 trillion, and growing. Yet, what do we have to show for it? Our roads and bridges are falling apart, our airports are in Third World condition, and forty-three million Americans are on food stamps…

Not only have our citizens endured domestic disaster, but they have lived through one international humiliation after another. We all remember the images of our sailors being forced to their knees by their Iranian captors at gunpoint…

In Libya, our consulate – the symbol of American prestige around the globe – was brought down in flames. America is far less safe – and the world is far less stable – than when Obama made the decision to put Hillary Clinton in charge of America’s foreign policy.

Never mind the pundits who fact checked Trump and pointed out the distortions. If you are a believer in the Trump message and you weren’t sure if he will win, what would you do with your portfolio?

The Trump Arbitrage trade is either gold, or stocks. Here is the gold vs. equities pair trade, which remains largely range-bound for most of this year.

Here is how I would evaluate the Trump Arbitrage Trade.

I could tell you that you would be late to the party in “buying” Trump, as COT data shows that hedge funds are in a crowded long in gold futures (via Hedgopia). 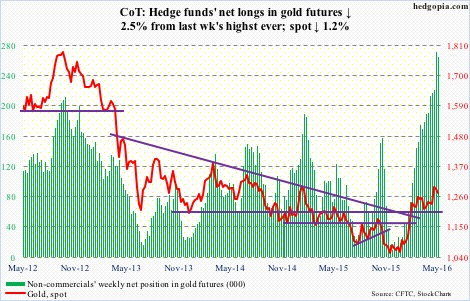 I could also tell you that while the recent past (Q1 growth) has been subpar, the American economy is undergoing a growth rebound. The Citigroup Economic Surprise Index, which measures whether macro-economic releases are beating or missing expectations, has been surging. That’s an indication of a growth surprise that’s probably not priced in by the equity market yet. 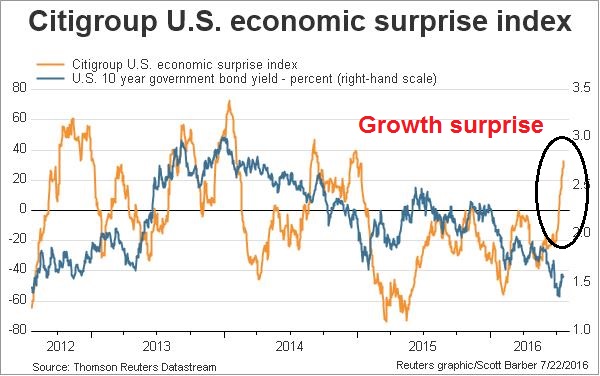 I could also tell you that the stock market has hit all-time highs and the US Dollar is rallying again. Does this look like the picture of a weak America?

You may choose to support Donald Trump and express your support at the ballot box, but a bet on his vision of a failing America would likely hit you in the wallet.

10 thoughts on “The Trump Arbitrage Trade”