Will an oil spike kill the market bull? – Humble Student of the Markets

I recently wrote about my scenario for a market top in 2016 (see My roadmap for 2016 and beyond), which goes something like this:

The biggest variable is timing. I believe that we are roughly at phase 2 of this process. Despite the possibility of a market top on the horizon, it is too early for investors to get overly defensive right now. There is still money to be made as growth expectations ramp up (see How the SP 500 could get to 2400 this year).
Then I came upon a note from a reader, who used a rule-of-thumb of an 80% run-up in oil prices as a precursor signal to a recession and bear market. 80%??? Crude oil bottomed in February at about $27 and we are nearly there! (He later amended that comment to an 80% year-over-year change in oil prices.)
The discussion led me to the work of James Hamilton, who showed that oil shocks have tended to precede economic recessions. If that is indeed the case, then how far is the American economy from a recession now that oil prices have spiked?

This is a case of correlation does not equal causation. The framework of that question is actually incorrect. It isn’t rising oil prices that cause recessions, it’s the Fed’s response to rising oil and other commodity prices that slow the economy.

The chart below shows the relationship between industrial commodity prices (blue line) and the Fed Funds rate (black line). In each of the recessionary episodes, we have seen Fed Funds rise in response to signals of rising inflationary pressures from higher commodity prices. 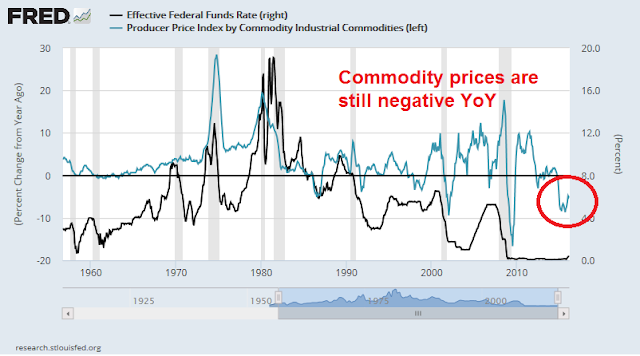 With commodity prices still falling on a YoY basis, it is far too early for the Fed to be overly hawkish about its interest rate normalization policy. But that begs the question, “When will the Fed become more aggressive in raising interest rates?”

Consider the chart of the CRB Index below. Assuming that commodity prices rise modestly by Q4, the CRB will be positive on a YoY basis by then. How far does it have to rise before the Fed turns decidedly hawkish?

Commodity prices, and oil prices in particular, may rally more than anyone expects. Bloomberg recently highlighted research from Rystad Energy, the Norwegian energy consultancy, indicating that oil supply and demand is coming into greater balance. The market may be in for a shock later this year as all the extra oil in storage recedes. 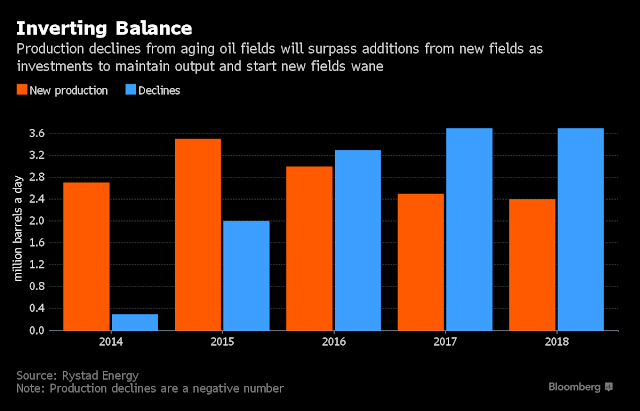 We return to the key question of Fed interest rate policy. I interpreted the April FOMC statement as the Fed’s attempt to tell the market that the June meeting is “live”, though data dependent. But the Yellen Fed’s communication policy is to avoid surprising the markets and the markets shrugged off the April statement and the market implied probability of a June hike barely budged.

Tim Duy thinks that the Fed is about to become more hawkish:

They can change their story within the scope of six weeks. Just like they did from the December to January meetings. And they have the one good reason to change the story: The dramatically change in financial market conditions.

The tightening in financial markets during the winter was the proximate cause of a more cautious Fed. The data didn’t help, to be sure, but more on that later. The combination of a surging dollar, collapsing oil, and a stock market headed only south signaled that the Fed’s policy stance has turned too hawkish, too fast. The Fed relented and heeded the market’s warnings.

But things are different now. US stock market rebounded. The dollar is languishing. And oil is holding its gains, despite disappointment with the lack of an output agreement.

This improvement will not go unnoticed on Constitution Ave. Even among the doves.

We shall see. I will be waiting and watching the tone of the Fedspeak in the days and weeks to come, starting with the Atlanta Fed conference on market liquidity this week.

My base case scenario calls for the Fed to get serious about tightening monetary policy late this year as the commodity prices start to pressure monetary policy. At that point, watch for the narrative to change to “the Fed is behind the curve”.

On the other hand, the turning point could come soon, or later. My inner investor is watching developments and keeping an open mind.

6 thoughts on “Will an oil spike kill the market bull?”