Don’t go away in May – Humble Student of the Markets

Call it what you want: momentum, broad based breadth, price trend. Despite the short-term consolidation shown by the stock market, the signs of positive momentum make it difficult to be intermediate term bearish.

I can see it in the trading signals of my Trend Model, which turned bullish soon after the February bottom. The prolonged length of the signal is indications of momentum, trend and powerful breadth thrust.

It is also manifested in broad based breadth participation. The chart below shows upside breakouts to all-time highs by different flavors of the Advance-Decline Line. In addition, the % of stocks above their 200 day moving average (dma) has strengthened out of a downtrend, which is another indication of breadth improvement. 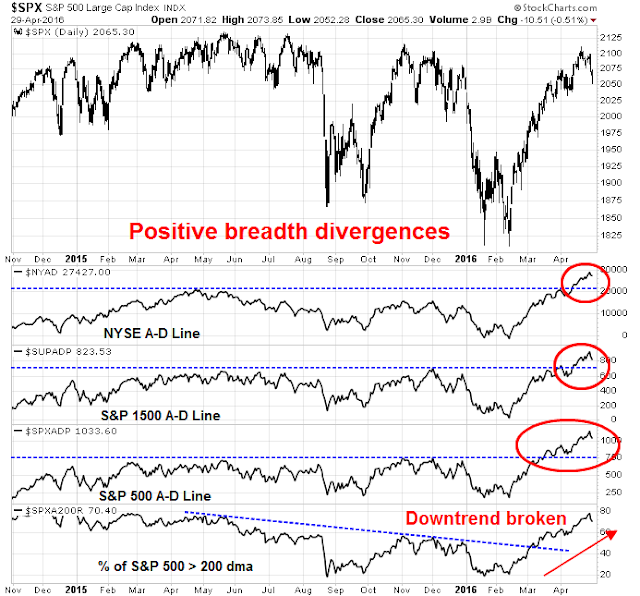 Strong breadth readings have been a characteristic of the rally off the February bottom. Dana Lyons observed that the stock market experienced a strong positive breadth day last Tuesday but without any significant overall advance. Such episodes have seen further gains in the past, though the sample size is a bit small to make definitive conclusions. 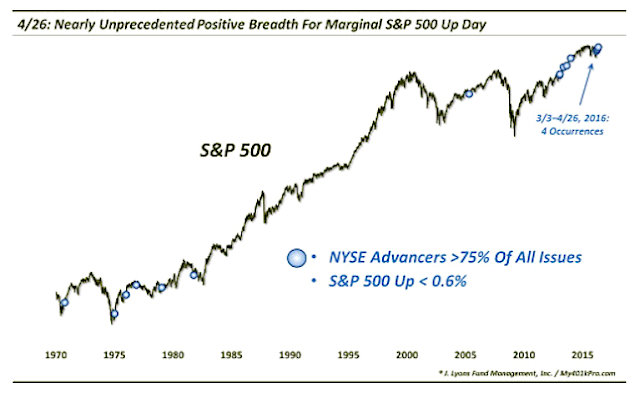 The surge in stock prices has been persistent enough to manifested itself in a Golden Cross, where the SPX 50 dma has crossed above the 200 dma from below. As an avid user of trend following models, I believe that most of the public interpret golden crosses and its inverse dark crosses incorrectly. The cross shows the trend, which in this case is bullish. What many traders is they failed to use the shorter and faster moving average as a trailing stop to manage risk. Regardless, here is the BoAML on the better than average historical returns that occur after a Golden Cross.

Nautilus Research also pointed out that the market recently experienced a 50-day price surge and those episodes have led to better returns in the past. 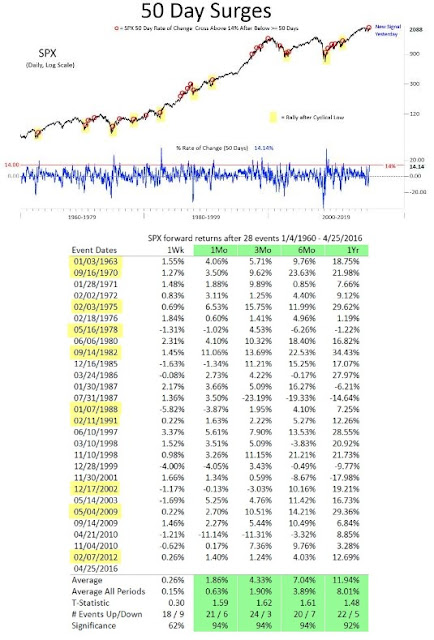 As well, I wrote last week about the broad based signs of rising risk appetite globally and across different asset classes (see How the SP 500 could get to 2400 this year). In short, we are seeing a broad based surge in asset prices across the board that is difficult to ignore.

In addition to technical momentum, I am also seeing signs of better fundamental momentum in the form of a better growth outlook. Notwithstanding the disappointment exhibited by large cap technology stocks like AAPL last week, the interim report card for the current Earnings Season is coming in with a solid passing grade. The latest update from John Butters of Factset shows an EPS beat rate of 74%, which is well above the historical average, and a sales beat rate of 55%, which is roughly in line with history. Equally important to the growth narrative has been the evolution of forward EPS, which continues to recover after the growth scare earlier this year (annotations in chart are mine). 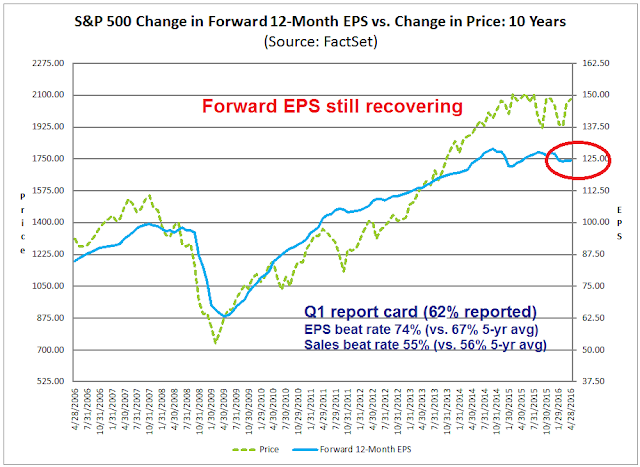 When analyzing earnings estimates, I prefer to use a continuously rolling forward 12 month EPS metric because analysts have shown a tendency to be overly optimistic in their estimates, which drop over time. The forward 12 month normalization process corrects for the downward revision bias. Even if we were to use just quarterly estimates as a metric, John Butters showed that their decline pattern so far has been “less bad” as they dropped 1.8%, which is better than the 5-year average of 2.2% and 10-year average of 2.3%:

During the month of April, analysts lowered earnings estimates for companies in the SP 500 for the quarter. The Q2 bottom-up EPS estimate (which is an aggregation of the EPS estimates for all the companies in the index) dropped by 1.8% (to $28.90 from $29.43) during this period. How significant is a 1.8% decline in the bottom-up EPS estimate during the first month of a quarter? How does this decrease compare to recent quarters?

Viewed through this lens, the results this Earnings Season are not awful. In fact, they have been pretty good.

The verdict from the bond market

I wrote last week about how to interpret the FOMC statement (see What happens if the Fed gets less dovish?). One of the key indicators that I said to watch was the shape of the yield cuve. As the chart below shows, the 2-30 year curve wobbled a bit after the FOMC meeting, but the steepening trend continued. In effect, the bond market is in effect expecting higher economic growth and rising inflation.

I am no permabull, but it`s hard to get overly bearish in the face of this combination of improving breadth, momentum, golden crosses and better growth outlook. This is not a freight train that I want to stand in front of.

It would be easier for me to get more cautious about the stock market if sentiment models showed that traders and investors weren’t so skeptical about this rally. Normally, you expect that sentiment would get absolutely euphoric after a 15% surge in stock prices. Instead, the latest reading from AAII and Rydex show that sentiment is still stuck in neutral. 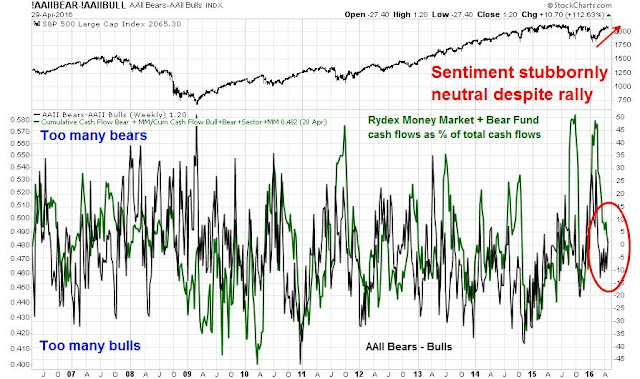 In fact, Bespoke highlighted that the percentage of AAII bulls edged down this week: 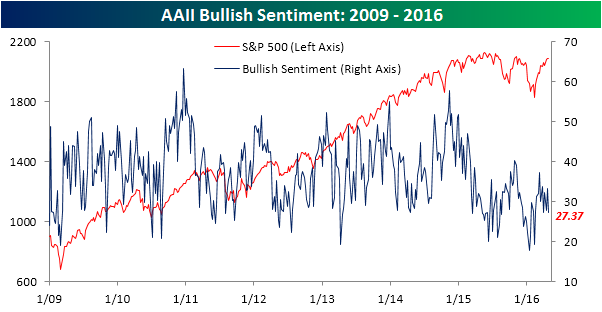 …and AAII bears ticked up: 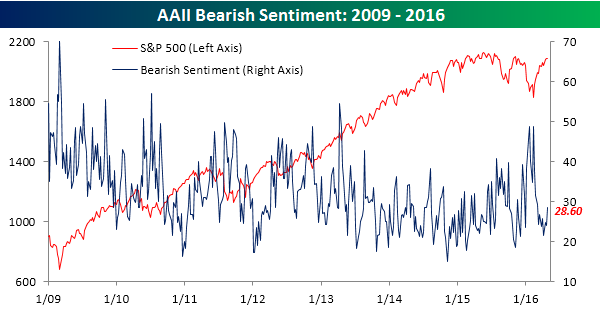 Skepticism is evident not only for individual investors, but institutions as well. I pointed out last week that surveys show that both global institutional investors (BoAML Fund Manager Survey) and US institutions (Barron’s Big Money Poll) show that fund behemoths are cautious and under-invested in US equities (see How the SP 500 could get to 2400 this year). The only group that has embraced this rally are the RIAs, as measured by the NAAIM survey.

This equity rally is by no means hated, but there is a high degree of disbelief in the face of a breadth and momentum surge. These readings are setting the stage for a Fear of Missing Out rally should price and fundamental momentum continue upwards, especially if the SPX were to break out to new all-time highs, which isn’t that far away from current levels.

Sell in May seasonality

What about the well-known “Sell in May and go away” negative seasonality for stock prices over the next six months? Should that be ignored?

While I do pay attention to seasonal patterns, current conditions are far more important than the historical pattern. Urban Carmel recently wrote a post (see Sell in May and buy back higher in November) that put the “Sell in May” returns into context. As the table below shows, the May-November has shown an weaker than usual average return, but the spread in median returns between summer and winter weren’t that far off. Further analysis showed that average returns were pulled down by a greater downside volatility during the May-November period. 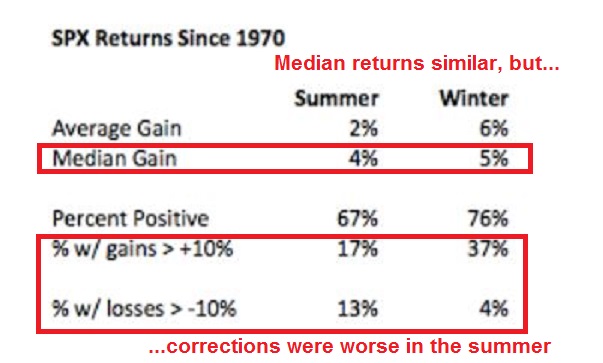 While returns over the next six months may have been subpar, they were nevertheless positive.

So do you want to sell in May and buy back higher in November?

The equity bull case I have outlined so far is an intermediate term outlook. There is no assurances that stock prices must go up next week. In fact, the market is facing an important short run technical test for bulls and bears alike.

The weakness late last week has left the market mildly oversold. We can see that using these charts from IndexIndicators. Based on % of stocks above their 10 dma, the market has retreated to levels where it has bounced in the past. 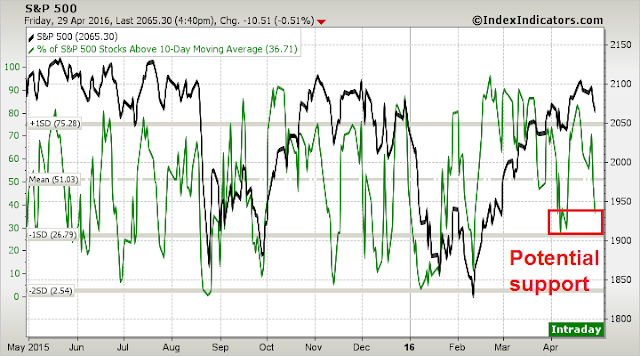 Similarly, net 20-day highs-lows breadth has retreated to levels where the decline was arrested in the current rally episode. 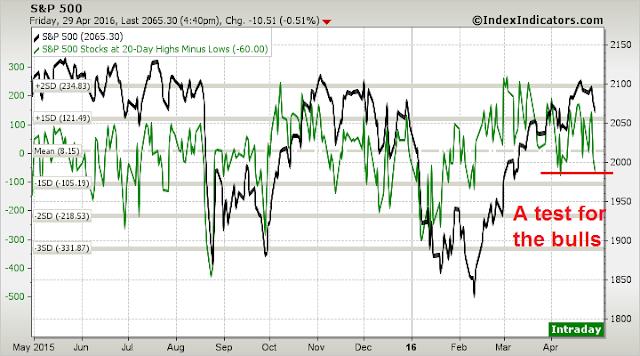 Looking over a 1-3 day horizon, the 5-day RSI has dipped into oversold territory. Moreover, the VIX Index tested its upper Bollinger Band, which is another oversold indicator. VIX tests of the upper BB have been periods where downside risk has limited in the past year, with two exceptions. These two exceptions appeared in the August 2015 and January 2016 declines. In other words, oversold markets can get more oversold. 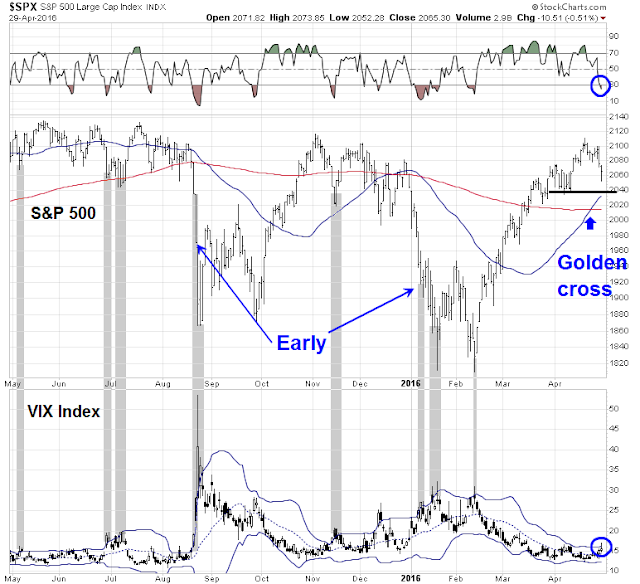 If this the current bout of weakness is another mild pullback or consolidation episode in the context of the upleg off the February bottom, then stock prices should start to advance again next week or, at worst, find a bottom near the 50 dma, which coincides with the April lows at about 2040. If, on the other hand, the current bullish impulse has run its course, then we will see a change in market character and more weakness ahead.

The bulls and bears have their battle lines drawn.