Mid-week market update: Can the stock market follow the script for past FOMC meetings in 2022? In each of the cases this year, the market weakened ahead of the meeting and rallied afterwards. The only deviation from the script occurred at the May FOMC meeting, when stock prices fell to new lows after a post-meeting reflex rally.

Fast forward to the June meeting. The S&P 500 skidded in accordance to the script and stocks rallied today, though there are two unfilled gaps above.

Here is how market conditions were setting up coming into the FOMC announcement.
The consensus last week was the Fed would raise rates by 50 bps in June and July, and wait for more data before making a decision at the September meeting. In the wake of a hot CPI report, expectations shifted to a virtual certainty of a 75 bps rate hike in June, followed by another 75 bps in July and consecutive 50 bps hikes for the next three meetings. The expected terminal rate is 4.00% to 4.25%, which would be reached in February.

Over at the stock market, three of the four components of my Bottom Spotting Model flashed buy signals on Monday. The only exception was the shape of the VIX curve, which came within a hair of inversion. Most notably, TRIN spike to an off-the-charts reading, indicating price-insensitive selling that’s indicative of a margin clerk driven liquidation event (see A liquidation panic). 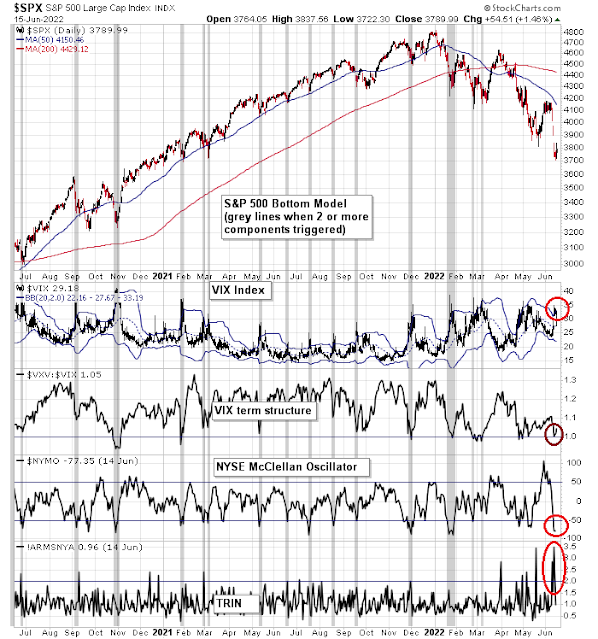 The evolution of inflation

This puts core PCE, which is the Fed’s preferred inflation metric, on a decelerating path.

Here is the all-important revised Summary of Economic Projections, which is more dovish than market expectations. Key highlights: 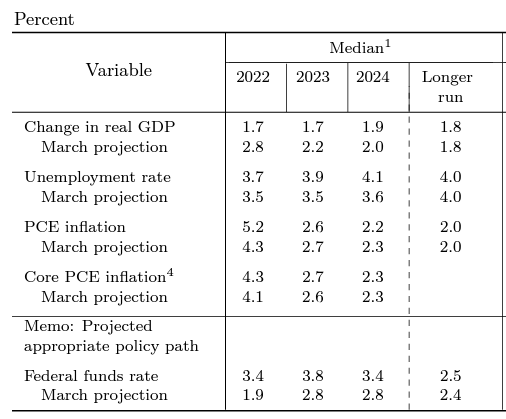 If the SEP projections are to be believed, the Fed is setting itself a low bar to pivot to a more dovish policy.

I recently wrote that investors should monitor insider activity as the S&P 500 tests its May lows (see The bears gain the upper hand). Though it’s only one data point, insider buying exceeded selling as the market panicked this week. 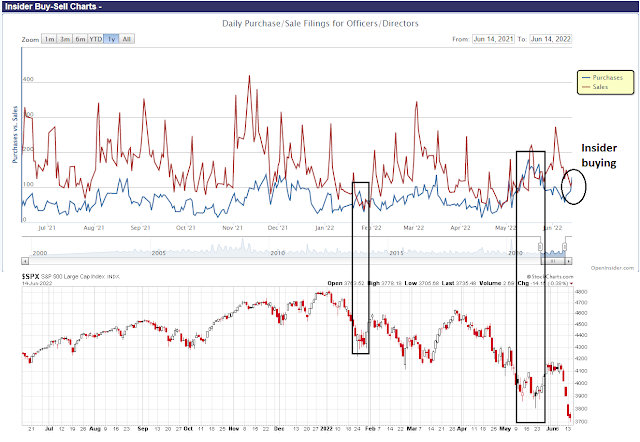 The market reacted to the FOMC statement and Powell’s press conference by adopting a risk-on tone.  Treasuries exhibited a bull steepener. The 2-year Treasury yield fell by 20 bps. The 2s10s yield curve, which was nearly flat at the height of the panic early this week, steepened to 13 bps. The USD fell. Stock prices rebounded.
Tomorrow is another day and the market may pivot to a different take, but I interpret the Fed’s statement, SEP, and Powell’s remarks as slightly more dovish than market expectations.
Fed Funds futures reacted dovishly:

Tactically, this looks like a bullish outcome for risky assets. The stock market is an an oversold extreme and a relief rally would not be unusual reaction.
As alwasy, I remain data dependent.

10 thoughts on “How the FOMC meeting script played out”