Take some chips off the table – Humble Student of the Markets 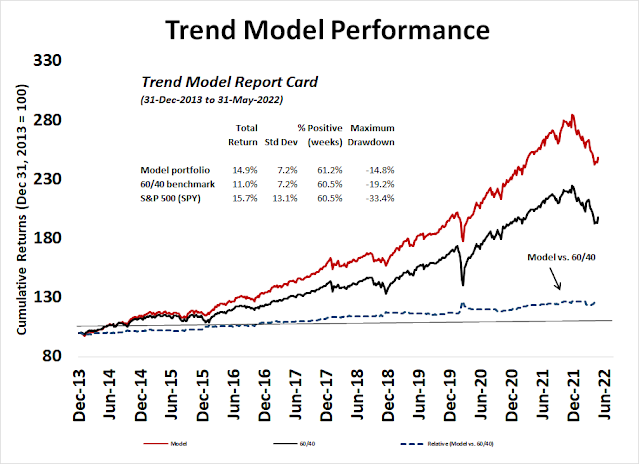 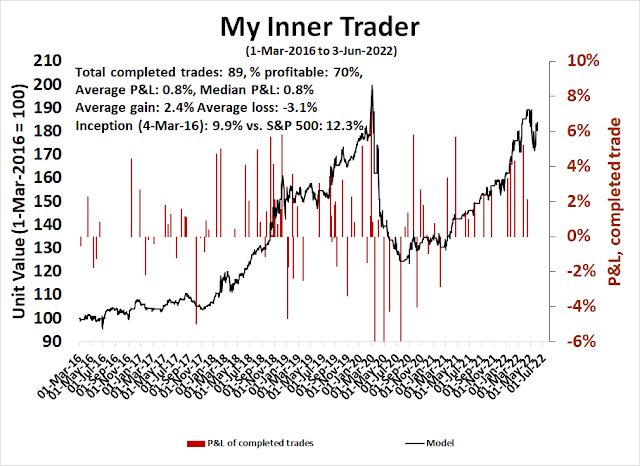 I recently outlined several ways of estimating the upside potential of the current market rally. A number of tripwires have been triggered or nearly triggered. While the market may strengthen further, it’s time to take some chips off the table.
Firstly, the S&P 500 is nearing initial resistance at the combination of the first Fibonacci resistance level and descending trend line at about 4200.

As well, the S&P 500 Intermediate Term Breadth Oscillator recycled from an oversold to an overbought condition. While overbought markets can become more overbought, it would be prudent to be reducing some risk at these levels. 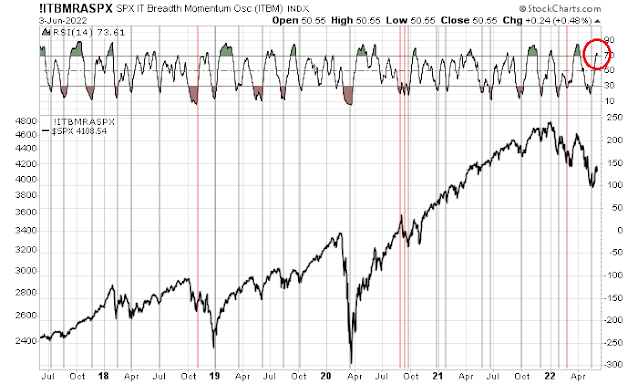 While these represent cautionary signals, some other indicators are still bullish.

I also suggested watching for penetration of the VIX Index below its lower Bollinger Band as a sign of an overbought extreme, which hasn’t happened yet. 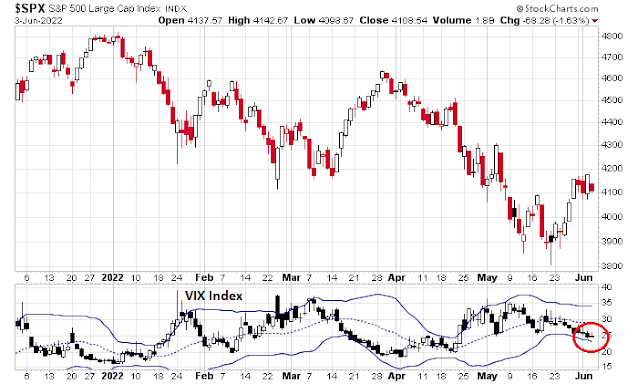 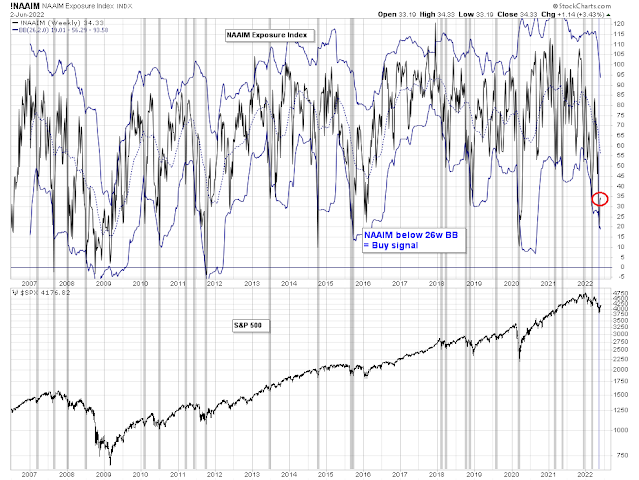 Similarly, other sentiment indicators like the 10 dma of the put/call ratio has begun to normalize from an extreme fear reading that was last seen during the COVID Crash. However, the 10 dma hasn’t returned to a neutral condition as defined by the 200 dma. 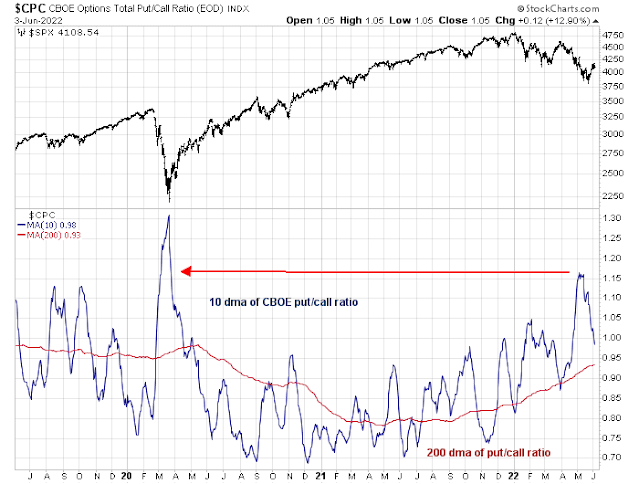 On the other hand, the AAII weekly sentiment survey jumped to a bull-bear spread of -5, which is a neutral condition. 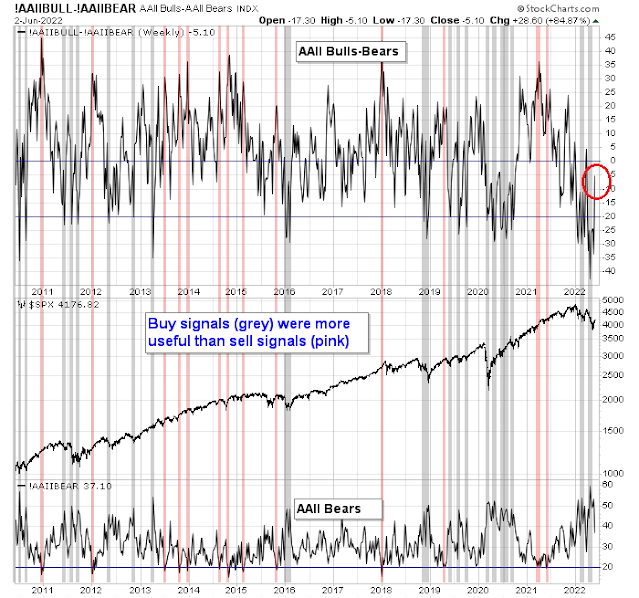 While the following are not actionable trading signals, there are nevertheless constructive for the bull case. Breadth is improving as. NYSE net highs-lows finally printed a series of positive readings. 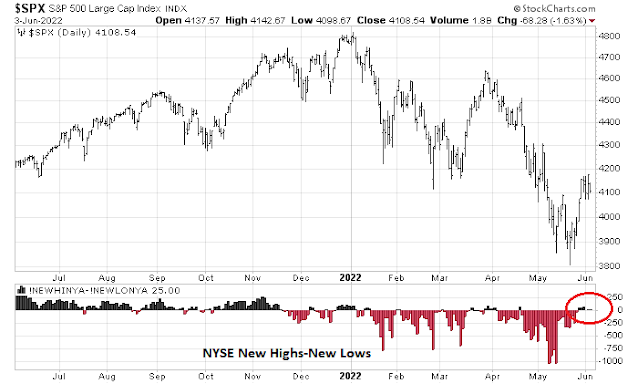 As well, credit market risk appetite is flashing positive divergences. The performance of high yield and leveraged loans relative to their duration-equivalent Treasuries is outpacing the S&P 500.

The BoA Bull & Bear Indicator, which is primarily a contrarian sentiment model, fell from 0.6 to 0.4 last week. This is an indicator with an intermediate time frame and not a short-term tactical timing indicator. It fell below 2 and prematurely generated a buy signal on March 23, 2022 near the tail end of the March rebound. Readings are now the lowest since June 2020. 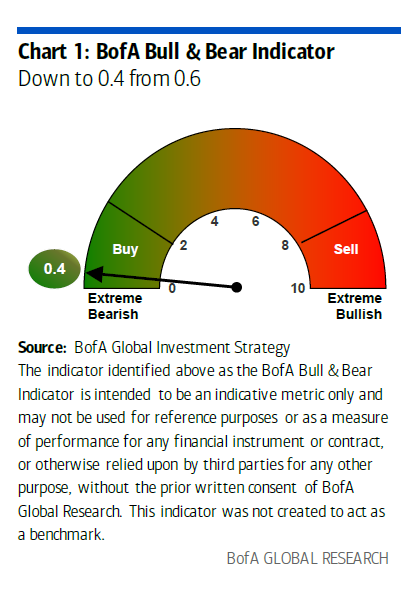 The easy money has been made

I interpret these conditions as the initial rebound is nearly over and the market is due for a pause, but stocks could work their way higher in a choppy manner over the next few weeks. Intermediate indicators such as the NAAIM Exposure Index, the CBOE put/call ratio, and the BoA Bull & Bear Indicator point to further upside potential.
However, the latest risk-on episode has the markings of a bear market rally. Price momentum is strong, but it’s not overwhelming. If history is any guide, past episodes where the five-day rate of change exceeds 10% have marked durable bottoms (grey vertical lines). If we change the threshold to 7% (pink lines), the results can be hit and miss. While the market has roared ahead in some cases, it also weakened after a brief rally. In light of the hawkish monetary backdrop, caution is warranted. 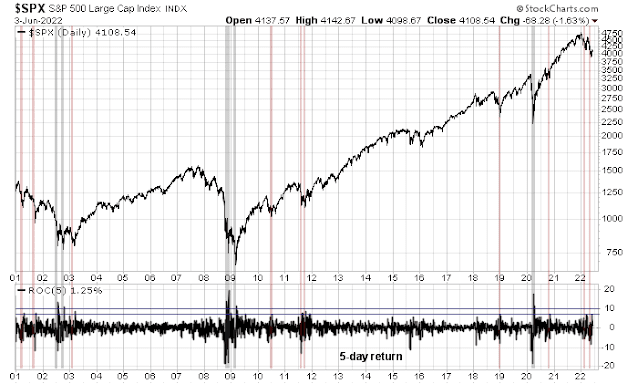 Finally, a bullish setup is appearing in the gold mining stocks (GDX), which has bearish equity market implications. The gold miners are oversold on the percentage bullish on P&F indicator (bottom panel), but exhibiting positive relative strength against gold. As well, the junior golds (GDXJ) are also showing positive relative performance against the seniors (GDX). The combination of an oversold internals combined with improving internals is potentially bullish for this group. Gold stocks are bottoming, which I interpret as potentially bearish for the overall equity market because of their negative beta characteristics. 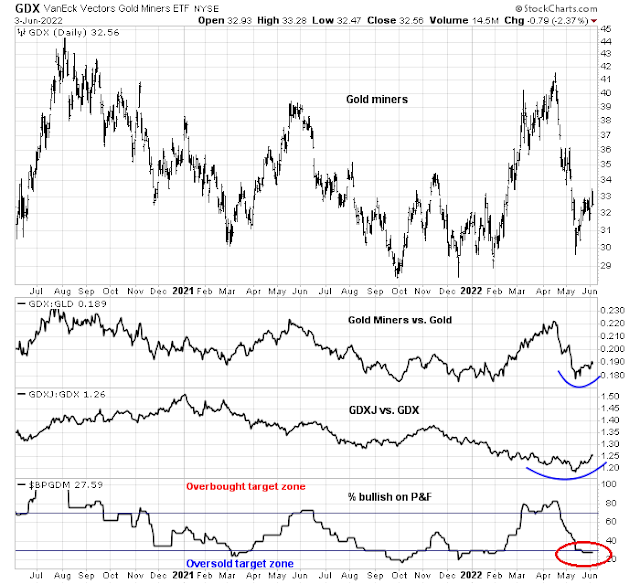 My inner investor is cautiously positioned. My inner trader remains long the market, but he is starting to edge his way towards the exit. How your trading account behaves will be a function of your risk and reward profile. Be bullish, but reduce your risk.
Disclosure: Long SPXL

43 thoughts on “Take some chips off the table”