Buy or fade the breadth thrust? – Humble Student of the Markets

The recent price surge in late May off the bottom produced a flurry of excitement among technical analysts. Extreme price momentum is known as a breadth thrust in chartist circles. Depending on the magnitude of the breadth thrust, they are often signals of new bull markets.

Marty Zweig detailed what became known as the Zweig Breadth Thrust buy signal in his book, Winning on Wall Street, which was first published in 1986. A ZBT buy signal is generated when NYSE breadth moves from an oversold extreme to an overbought extreme within 10 trading days. ZBT signals are very rare. The book described 14 signals since 1945. The average gain following these 14 Thrusts was 24.6% within 11 months.
The market surge in late May just missed generating a ZBT. The market achieved the breadth thrust in 11 days, not 10. Since then, a number of chartists have analyzed these “just missed” signals and concluded that they are nearly just as good as the classic ZBT buy signal. As an example, Recession Alert observed:

All but 2 of the 13 signals in the above chart provided positive gains averaging 8.4% some 6 month out, which is equivalent to a 84.6% accuracy. If you relaxed the positive outcome holding period from 6 months to 12 months, then only the 2001 signal provided a negative outcome, increasing the accuracy to 92%. In fact, an examination of an actuarial table of the SP-500 gains for various holding periods after each ZBT-A signal yields some more interesting results.

Does that mean it’s time to sound the all-clear and buy stocks?

Not so fast. An out-of-sample analysis of the classic ZBT shows that these signals are indeed very rare. There have been only six signals since the publication of Zweig’s book in 1986. In all cases, the S&P 500 was higher a year later, but there were two cases of failed momentum – when the market chopped sideways and retested the old lows before rising.
While the sample size is extremely small (n=2), the cases of momentum failures coincided with the Fed tightening policy. The successful ZBT signals occurred during periods when the Fed Funds rates was either stable, falling, or the Fed was about to embark on an easing cycle.

Global central banks are undergoing a tightening cycle. The market expectations of the Fed Funds rate indicate a virtual certainty of half-point rate hikes at the next two FOMC meetings, with a split decision between a quarter-point or half-point hike at the September meeting.

What’s the criteria for the Fed to pause its breakneck pace of half-point rate hikes? At the WSJ Future of Everything Festival, Fed Chair Jerome Powell stated, “What we need to see is inflation coming down in a clear and convincing way, and we’re going to keep pushing until we see that.” He went on to use the “clear and convincing” language three times in the interview.
What does “clear and convincing” mean? Powell was originally trained as a lawyer, and “clear and convincing” is a legal standard of proof that it requires that the evidence be substantially more probable to be true, It rests between the “preponderance of evidence” standard, which requires only “more likely than not” and the strict “beyond a reasonable doubt” standard.
Core PCE, which is the Fed’s preferred inflation metric, has been moderating. We have seen three consecutive months of core PCE prints at the 0.3% level, which is consistent with the Fed’s year-end projection of 4.1%/ Average hourly earnings have also moderated. Does that constitute “clear and convincing” evidence? Here is how Powell responded:

We all read—of course, everyone reads—the inflation reports very carefully and looks for details that look positive and that kind of thing. But truthfully, this is not a time for tremendously nuanced readings of inflation. We need to see inflation coming down in a convincing way. That’s what we need to see. And until we see that, we’re going to keep going. We’re not going to assume that we’ve made it until we see that. And we’re not seeing that right now.

In other words, don’t expect a dovish pause in the near future. Fed governor Christopher Waller echoed Powell’s view with an even more hawkish tone in a recent speech delivered at the Institute for Monetary and Financial Stability in Frankfurt:

I support tightening policy by another 50 basis points for several meetings. In particular, I am not taking 50 basis-point hikes off the table until I see inflation coming down closer to our 2 percent target. And, by the end of this year, I support having the policy rate at a level above neutral so that it is reducing demand for products and labor, bringing it more in line with supply and thus helping rein in inflation.

A lot of data will be coming in between now and the September FOMC meeting. While a dovish pivot is possible, don’t expect a pause in rate hikes at the September meeting. At best, the Fed will moderate its pace to a quarter-point increase.

While many technical analysts have viewed the recent breadth thrust in a bullish light, the recent risk-on tone is acting to encourage the Fed to be even more hawkish. That’s because monetary policy works through tightening financial conditions. While the Chicago Fed’s National Financial Conditions Index has tightened, it is not extreme by historical standards.

The recent risk-on tone of the markets, of which the near ZBT is a symptom, acted to ease financial conditions. As an example, the iShares Interest Rate Hedged High Yield ETF (HYGH), which measures the relative performance of junk bonds compared to Treasuries, rallied so hard in late May that it left two price gaps. The strength in HYGH and the S&P 500 effectively unwound some of the Fed’s tightening policy. All else being equal, the market reaction will encourage an even more aggressive monetary policy.

In all likelihood, global central banks will keep raising rates until something breaks. Nouriel Roubini is calling for a hard landing in a Project Syndicate essay:

Because stagflationary shocks both reduce growth and increase inflation, they confront central banks with a dilemma. If their highest priority is to fight inflation and prevent a dangerous de-anchoring of inflation expectations (a wage-price spiral), they must phase out their unconventional expansionary policies and raise policy rates at a pace that would likely cause a hard landing. But if their top priority is to sustain growth and employment, they would need to normalize policy more slowly and risk unhinging inflation expectations, setting the stage for persistent above-target inflation.
A soft-landing scenario therefore looks like wishful thinking. By now, the increase in inflation is persistent enough that only a serious policy tightening can bring it back within the target range. Taking previous high-inflation episodes as the baseline, I put the probability of a hard landing within two years at more than 60%.

We are on the brink of an epidemic of emerging market defaults, the scale and scope of which will rival the debt crisis of the 1980s. Rate increases by Western central banks, fallout from the COVID pandemic, surging food and fuel prices resulting from the economic fallout of the war between Russia and Ukraine, mismanagement, and outright corruption all are contributing factors.

Cracks are already appearing. Sri Lanka’s economy is teetering and Pakistan’s foreign exchange reserves have fallen below $10 billion, which has prompted the government to seek help from the IMF.

In conclusion, traders should fade the recent episode of positive equity price momentum. While breadth thrust signals are bullish over a one-year time horizon, past signals have fizzled and the market has retested the old lows when the Fed is undergoing a hiking cycle.
Long-term investors can begin to accumulate positions at current levels with the awareness that they may see some lower prices over the next few months. The recent cluster of insider buying at the May lows is a constructive sign that downside risk may be limited (see A bull’s view of the rebound). Focus on high-quality stocks in equity portfolios during the current period of economic uncertainty.
The quality factor can be measured in a number of ways. S&P has a stricter profitability index inclusion criteria than FTSE/Russell, and S&P’s large and small-cap indices have beaten their Russell counterparts. As well, Pacer has a series of cash cow ETFs consisting of companies with strong cash-generative qualities (COWZ and GCOW). Both have outperformed their benchmarks in 2022. 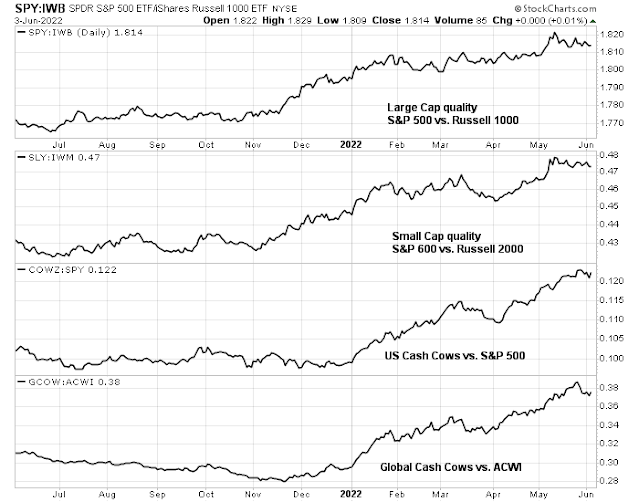 5 thoughts on “Buy or fade the breadth thrust?”