Mid-week market update: The bears have exhibited great expectations for risk assets. Ed Clissold of Ned Davis Research observed that the NDR Crowd Sentiment has been at a sub-30 reading, which is historically bullish. However, he pointed out that momentum is negative and hedged with “sentiment is extremes differ cycle to cycle, so it’s best to wait for sentiment to begin to reverse”. 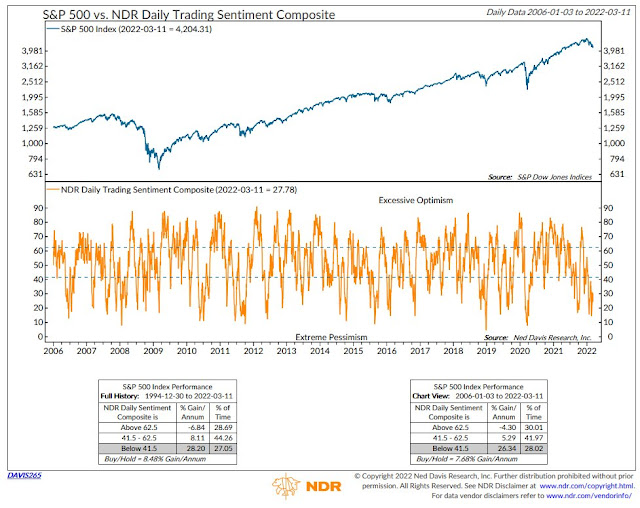 Sentiment indicators have indeed been extreme for some time. Investors Intelligence bears exceeded bulls for the third week. Such conditions have historically marked short-term bottoms in the past. 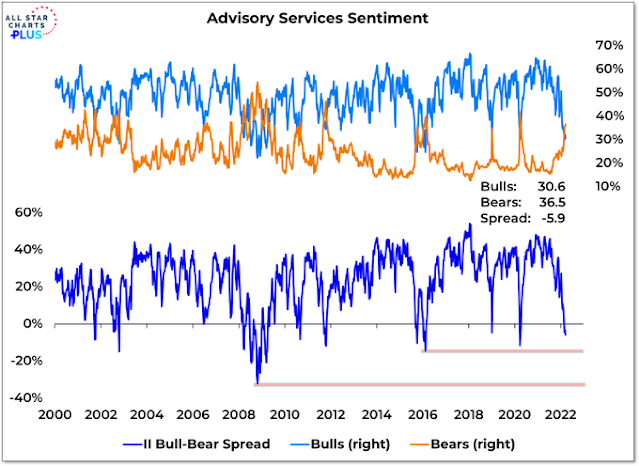 The latest BoA Global Fund Manager survey also shows that managers have gone extremely risk-off, which should be contrarian bullish. 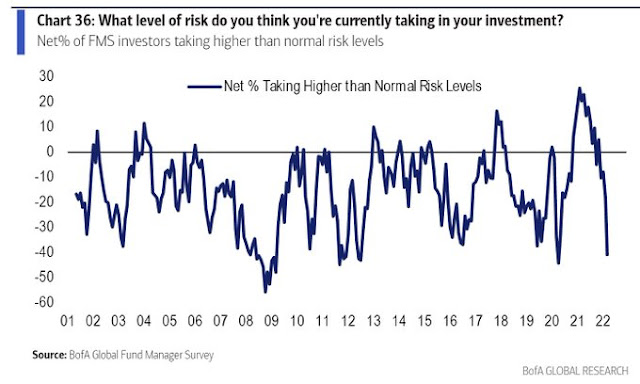 Chartists can analyze all the sentiment and technical charts they want, but the inescapable reality is the market is nervous over the course of Fed policy and the inflationary effects of the supply chain disruptions of the Russia-Ukraine war. If you can predict those outcomes, you can predict the market.
Here is how interest rate expectations have evolved. Coming into the FOMC meeting, Fed Funds futures was discounting a quarter-point rate hike at the March meeting, a half-point rate hike at the May meeting, and a total of 1.75% for 2022.

The Fed raised rates by a quarter-point, as expected and acknowledged the uncertainty posed by the Russia-Ukraine war in its FOMC statement.

The invasion of Ukraine by Russia is causing tremendous human and economic hardship. The implications for the U.S. economy are highly uncertain, but in the near term the invasion and related events are likely to create additional upward pressure on inflation and weigh on economic activity.

In its Summary of Economic Projections (SEP), it revised the 2022 expected core PCE inflation from 2.6% in December to 4.3%. The Fed had been expecting that inflation would fall in 2022 and this upward revision is reflective of the Russia-Ukraine war inflationary disruptions but leaves it wiggle room to turn less hawkish if inflationary pressures ease. The median Fed Funds target at the end of 2022 is now 1.9%, which is consistent with market expectations. In addition, Fed Funds is expected to overshoot the long-run neutral rate in 2023 and 2024.

In the wake of the FOMC meeting and the Powell press conference, expectations have turned even more hawkish and now expects a total of 2.0% in rate hikes by December.

Even though the SEP reduced the expected GDP growth rate in 2022, Powell asserted that the economy is strong and recession risks are not especially elevated. The risk is the Fed is tightening into a recession. Indeed is already reporting some softness in the jobs market. Job postings have topped out and begun to roll over. Looking under the hood, the weakness in jobs postings is evident in low-wage jobs, while middle and high-wage job postings have been steady. 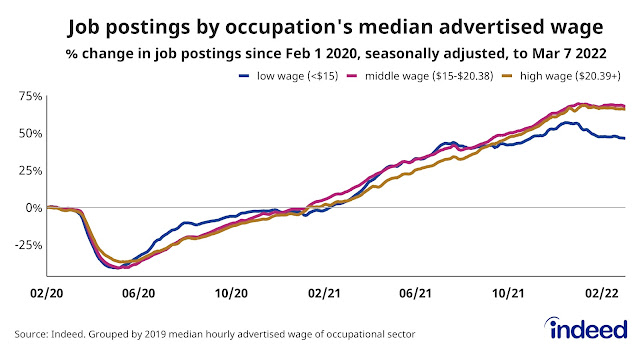 As well, retail sales missed expectations this morning. Real retail sales per capita appear to be rolling over, and this indicator is one of my Recession Watch long-leading indicators.

While these readings are highly preliminary, this is what an economy that’s peaking out looks like. The  market reacted by collapsing the 2s10s yield curve from 30 bps to 25 bps. I interpret these developments constructively as it is setting Fed policy and expectations to be as hawkish as it can possibly get. The stock market’s ability to hold its gains in the wake of the FOMC meeting is also positive.

Peace in our time?

The market’s recovery yesterday and today can be partly attributed to hopeful signs that a breakthrough may be near with the Russia-Ukraine negotiations. The geopolitical risk premium is fading, but some underlying worries remain and they are especially evident in China.
Both gold and oil prices have made the round-trip from their recent price spikes, indicating war fears are receding. 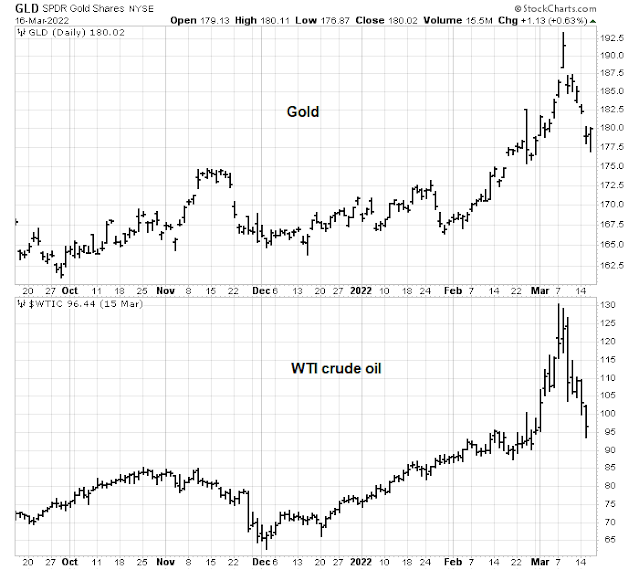 I have remarked in the past that the S&P 500 has held up remarkably well even though it had to contend with a hawkish Fed, a surge in global inflation, and the Russia-Ukraine war. Here’s why. The returns of different regions relative to the MSCI All-Country World Index (ACWI) tell the story. The US stock market has been a relative safe haven during the war. Just take a look at the drop in the relative performance of Europe and subsequent recovery (middle panel) and you can see the volatility and jitters of investors. Emerging markets ex-China has held up well (bottom panel), which is explained by the composition of some EM markets are commodity exporters that have benefited in the price surge while others were hurt by geopolitical and global inflation fears. 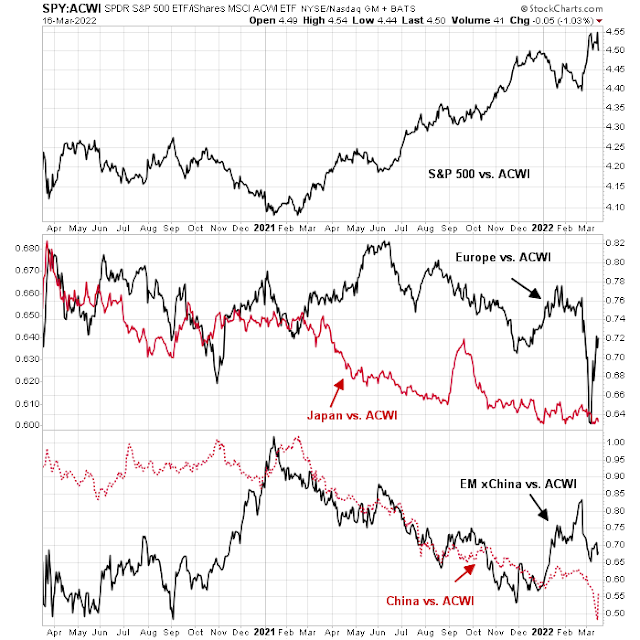 China, on the other hand, is a different story. The Chinese economy has been burdened by the real estate debacle and now the massive COVID lockdowns. Notwithstanding the recent announcement of support measures by Beijing, the relative performance of Asian markets has been equally challenging with the exception of resource-rich Australia. 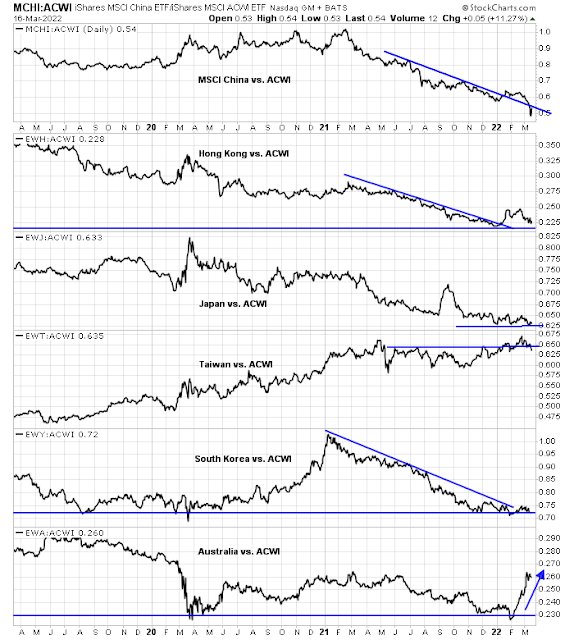 China’s pro-market pledges overnight were obviously helpful to the market as Asian markets affected a risk-on reversal. But none of that matters if China were to help Russia in the war. The West will be forced to sanction China into the ground. Beijing knows this. If the war drags on, China, the US, and the EU will be playing a high-stakes game of chicken.

The news from the front

In short, the short-term fate of risk appetite depends on how the war evolves. The Russian advance has been stalled for days, though they have made some progress in the south. The Russian military continues to be constrained by logistical problems. This map of Ukraine shows a group of almost equidistant road-linked thrusts stretching from Russia and Belarus into Ukraine illustrates the Russian Army’s supply-constrained advance. This War on the Rocks analysis indicated the average Russian unit has a truck lift to take it to 90 miles (140km) from the closest large supply dump (see below). You would have to double the trucks on hand to get to 180 miles. The only exception is the black arrow on the map, where the Russians appeared to have doubled their transportation allocation in order to reach the eastern edge of Kyiv. 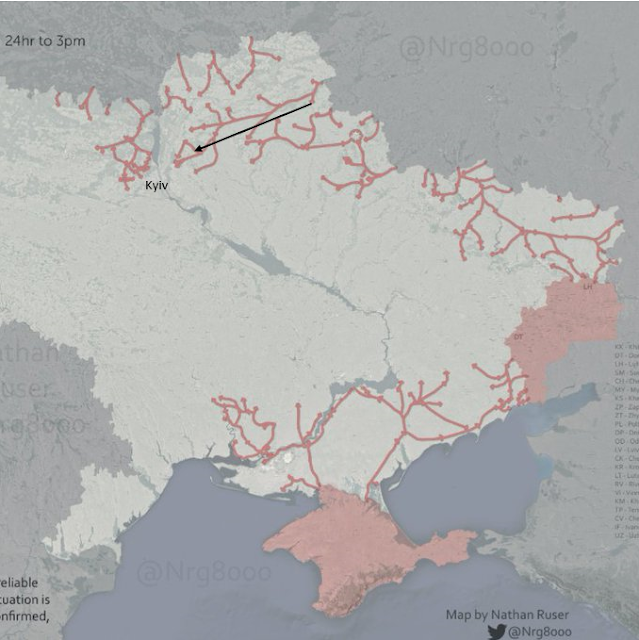 A Twitter thread by retired Australian Major General Mick Ryan summarizes the situation. The Russian Plan A was a lightning thrust to take over Kyiv and the government within a couple of days, which didn’t work. The Russians turned to Plan B, which “features lots more firepower, as well as destruction of smaller cities to set an example for Kyiv”.

Plan B has not worked out either. They have slowly gained ground, but at massive cost in personnel & equipment. At the same time, rear area security has suffered. This is obviously a trade off by the Russians so they can push forward as much combat power as possible.
But rear area security is a significant mission, and normally absorbs thousands of troops (infantry, air defence, cavalry, engineers, etc). Because the Russians have incompetently executed this mission, there have been constant ambushes against logistics convoys.
These ambushes on logistics convoys are another source of attrition in personnel, supplies and equipment to add to combat losses, and (if it is to be believed) combat refusals and desertions from Russian troops.

The Russians have now committed all of their pre-positioned invasion force, and Plan B is making only slow progress. Ryan concluded:

The Russian campaign, if it has not already, is about to culminate. US doctrine defines this as (for offense) “the point at which continuing the attack is no longer possible and the force must consider reverting to a defensive posture or attempting an operational pause.”

They are now mobilizing more reserves, which are of lower troop quality, and recruiting mercenaries from Syria as part of Plan C.

Plan C might be described as: hold current gains, long range firepower on cities, foreign fighters as cannon fodder, destroy as much infrastructure and manufacturing capacity as possible, expand the war to the west to deter foreign volunteers & aid providers.

While that represents Ryan’s assessment of the facts on the ground, it may serve both sides to reach a peace agreement in order to halt hostilities and the pain on both sides. The Financial Times reported that “Ukraine and Russia have made significant progress on a tentative 15-point peace plan including a ceasefire and Russian withdrawal if Kyiv declares neutrality and accepts limits on its armed forces, according to three people involved in the talks.” However, Ukrainian officials downplayed the reports of progress as “more positive tone from Russia was more about Moscow wanting sanctions pressure eased, calling it a “smoke curtain.”

We are now at the “the trade talks are going very well” phase of the market. Much is at stake. The disintegration of the European economy and global supply chain disruptions could continue, which will lead to inflationary pressures that force the Fed to tighten until the economy falls into a recession. In addition, there is the Beijing wildcard. Will China actively support Russia with supplies for its war and risk sanctions, which would tank its economy?

Stay tuned. War-related developments cannot be predicted by any charting or sentiment indicators. The market is recovering from a deeply oversold condition, but the environment remains volatile and there will undoubtedly be opportunities for both bulls and bears ahead.