Not your father’s commodity bull – Humble Student of the Markets

Some chartists have recently become excited over the commodity outlook. Setting aside the headline-driven rise in oil prices, the long-term chart of industrial metals like copper looks bullish. Copper is tracing out a cup-and-handle pattern breakout that targets strong gains in the years ahead. Moreover, the one-and the two-year rate of change, which is designed to look through the effects of the COVID Crash, are elevated but not out of line with past bull phases. 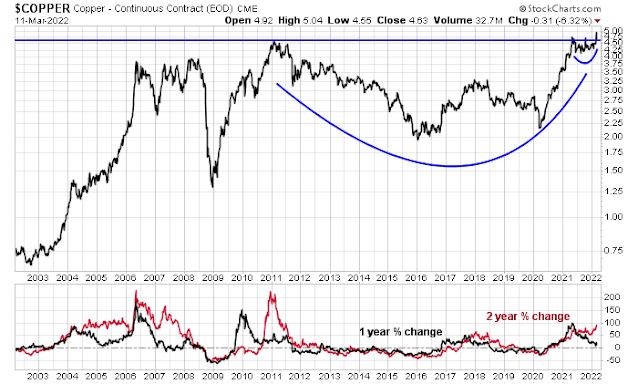 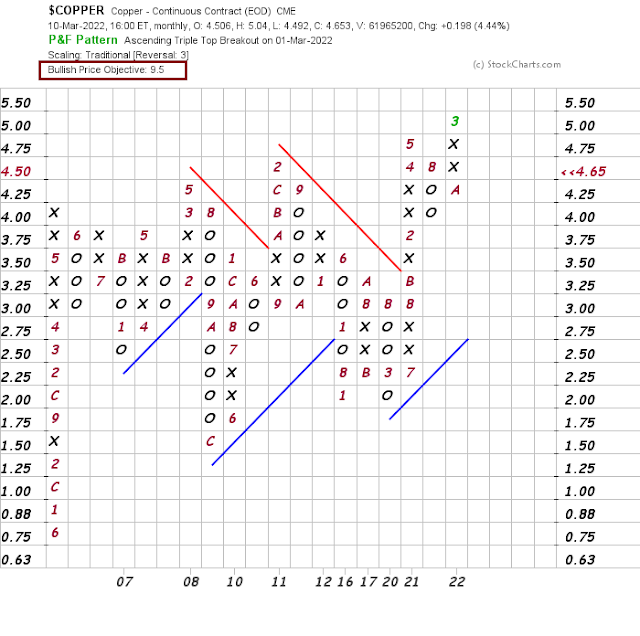 The chart patterns of commodity-related equity sectors look equally impressive. Energy stocks are already in both absolute and relative uptrends. 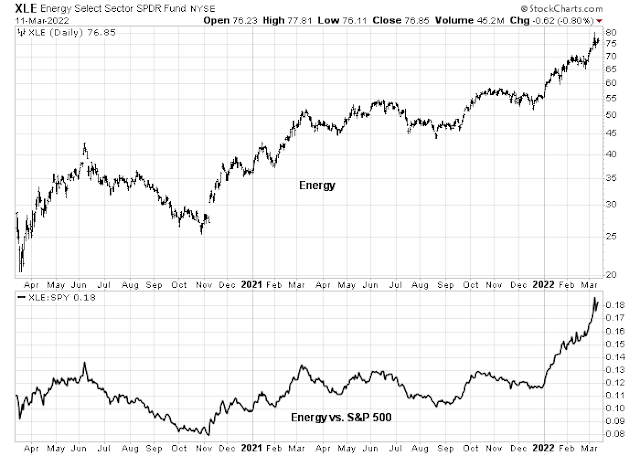 Global mining stocks are testing resistance while forming a saucer-shaped base, and they have already staged a relative breakout when compared to the MSCI All-Country World Index (ACWI). 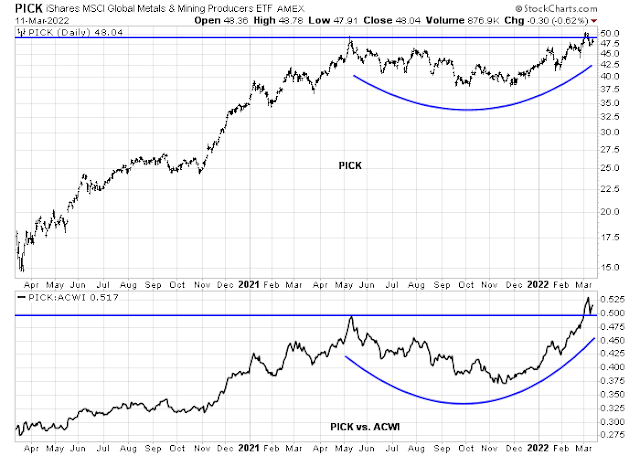 The agribusiness industry has also staged an upside breakout from a long base, and the relative breakout is also evident. 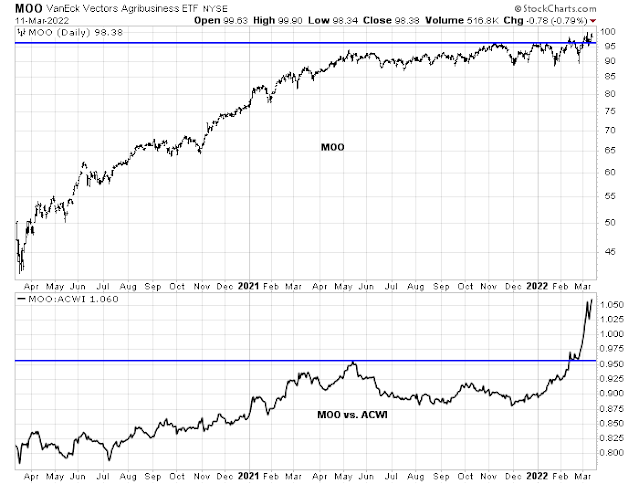 While I love a commodity bull story, there’s a difference between a healthy bull and a destructive one. We are headed for the latter. Commodity bull markets are caused by a supply/demand imbalance. A healthy bull stems from demand outstripping supply.
On the other hand, a destructive bull is caused by a shock of supply withdrawal. If supply can’t come online quick enough, prices must then rise to the point of reducing demand.  That’s a destructive bull market because it’s unsustainable. Prices spike and then crash as consumers pull back on demand.
Here is what a supply shock looks like. The relative performance of cyclical industries tells the story. The relative returns of oil and gas extraction and mining stocks have suddenly spiked, but the relative returns of other cyclical industries are range bound. In a healthy bull, strong cyclical demand should be lifting all boats. Instead, this is a picture of a supply shock related to the Russia-Ukraine war. A long-term analysis of the CRB Index shows that it staged an upside breakout through a falling trend line (dotted line) but it is approaching a key resistance level. The one and two-year rates of change are highly extended by historical standards. 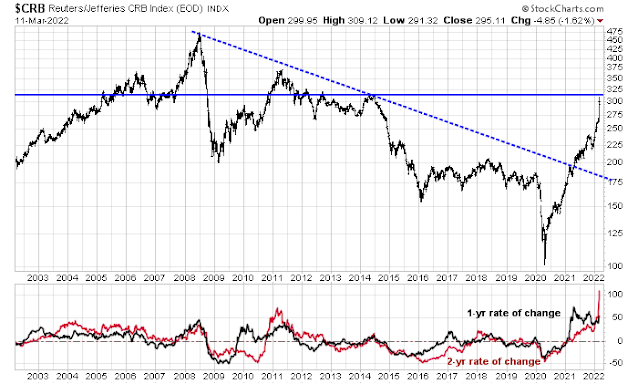 The commodity price spike is also causing dislocations in the financial markets. Nickel prices soared to as much as $100,000 per tonne on the LME before the exchange suspended trading last week. Chinese tycoon Xiang Guangda, who controls the world’s largest nickel producer, Tsingshan Holding Group, had built a large short position in nickel futures and is rumored to have incurred losses of as much as $2 billion at the price peak of $100,000. The company later secured a bank lifeline and prices stabilized in Shanghai, though the LME nickel market remains suspended. 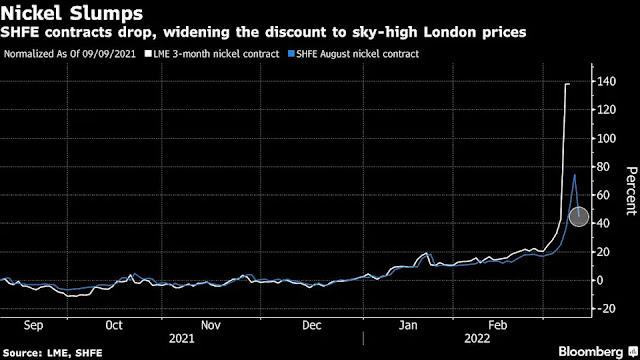 Imagine the panic if this had happened in wheat or corn and the hedger was a Russian or Ukrainian producer that couldn’t meet its margin calls.

The commodity price spike puts the Fed in an uncomfortable position. The February CPI print was in line with market expectations, but headline CPI reached a 40-year high and it is expected to rise further owing to the strength in energy and food prices. As a consequence, Fed Funds futures have turned even more hawkish. The market now expects rate hikes totaling 1.75% by the December FOMC meeting.

The silver lining is that energy intensity has fallen dramatically since the Arab Oil Embargo price shock of the 1970’s. Energy expenditures as a percentage of PCE (blue line) and gasoline prices to average hourly earnings as a measure of affordability (red line) have both risen but levels are not extreme compared to their own histories.

However, inflation expectations are rising and they are at risk of becoming unanchored. Jerome Powell is on record as willing to drive the economy into recession in a Volcker-like manner. Is a recession ahead? When will the Fed stop?

Even Paul Volcker was cognizant of financial stability risk – and the first task of central bankers is to be financial firefighters. Don’t forget that the Volcker Fed eased policy in response to the Mexican Peso Crisis in August 1982.
The accompanying chart is a history lesson of that era. The DJIA, which was the market benchmark of that period, topped out in 1981 as the Fed tightened policy and raised rates. The share price of Citigroup, which is representative of the banking group, topped out with the Dow and began a slow descent as financial conditions deteriorated. Cyclical indicators such as the platinum-gold spread, which was relevant because both metals had precious metal components but platinum also had an industrial use in automotive catalytic converters, topped in early 1980 and fell negative. When Mexico announced that it couldn’t meet its debt obligations and devalued the Peso, financial stress spiked and threatened the stability of the US banking system. The Fed responded by easing policy and that incident marked the beginning of a long equity bull. 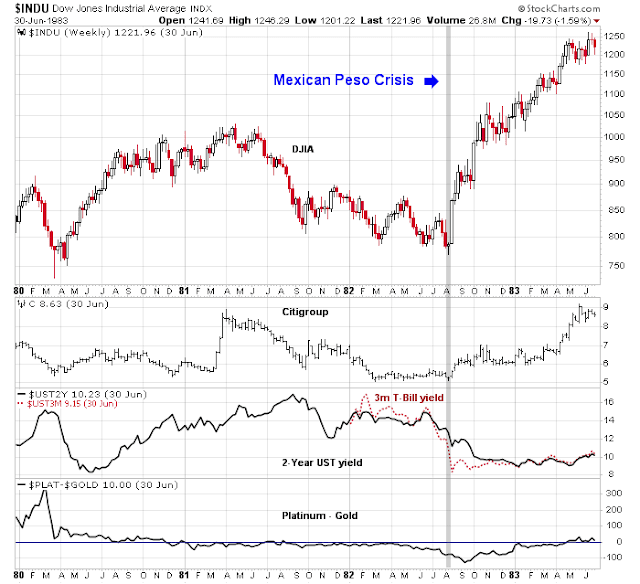 Fast forward to 2022. How far is the system from a Mexican Peso Crisis moment? To be sure, yield spreads are rising as financial stress increases, but readings are nowhere near crisis levels. Don’t expect the Powell Put to be activated under the current conditions.

In summary, the latest spike in commodity prices should be interpreted as an exhaustive move instead of the start of a new bull cycle. It is a supply shock that should resolve with demand destructive in the coming months, which implies a slowdown in economic activity. The yield curve is flattening quickly, indicating market expectations of an economic slowdown.

I had highlighted last September a different source of stagflation risk. Former Fed economist Claudia Sahm (of Sahm Rule fame) observed that the risk is “supply chain disruptions became more frequent as climate change disasters become more commonplace”. Little did I expect the supply chain disruption would come from a war. As an illustration, a recent Financial Times article reported that Volkswagen warned that the economic damage from the war could be even worse than the pandemic.
Much will depend on how the war develops and the evolution, the effects of the accompanying sanctions, and how governments react to shortages.
In conclusion, the recent strength in commodity prices is exhaustive and not the start of a secular bull trend. Treat any narrative of a new commodity bull or super cycle with caution. To the extent that investors hold or overweight energy and mining stocks, consider rotating into long duration Treasury bonds in anticipation of a bond market rally as the economy slows.

23 thoughts on “Not your father’s commodity bull”