A double bottom? – Humble Student of the Markets

Mid-week market update: The S&P 500 put in a potential double bottom when it tested its recent lows while exhibiting a positive RSI divergence. Stock prices rallied on the news of a ceasefire in order to allow civilians to evacuate. 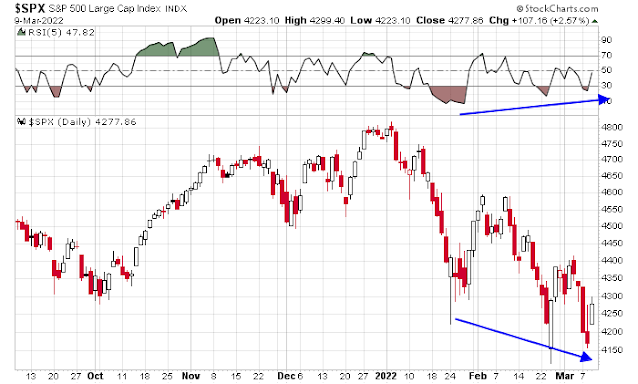 Is this a durable bottom?

News from the front

The market has been extremely war headline sensitive and it’s impossible to discuss risk appetite without discussing the war. While I am no military analyst, here is a summary of what is known from open intelligence (OSINT) sources.
Here is the good news. Both sides are talking and there is some movement in position. Initially, the Russians had demanded total surrender and regime change when the invasion began. Early this week, the Kremlin softened their position to:
Zelensky responded with a willingness to negotiate on the status of the breakaway regions and conceded that NATO is not ready to accept Ukraine as a member but sought security guarantees for a settlement. AP also reported that Russia says negotiations with officials from Kyiv to resolve the conflict in Ukraine were making headway and underscored that Russian troops were not working to topple the Ukrainian government.
While there is still a large gulf between the two sides, a narrowing of positions is constructive.
As for the war, both sides are facing different pressures. Russian forces have significantly underperformed expectations and the Ukrainians have put up strong resistance. Moreover, Ukraine has been winning the information war by highlighting Russian failures and losses, though Russia recently stepped up its information campaign by claiming that Ukraine was developing a dirty bomb and the US had a dangerous bio lab on Ukrainian soil. 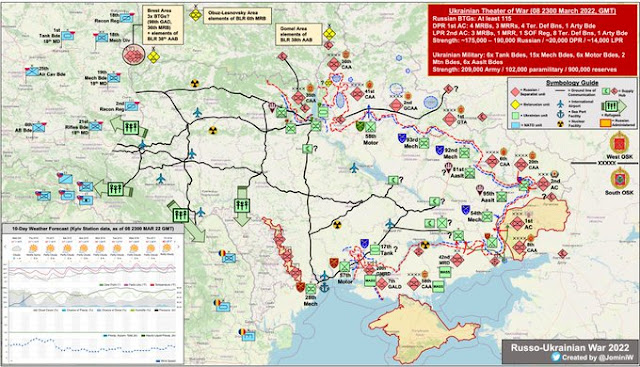 The Russian advance has been largely stalled in the past few days owing to supply and logistical constraints. However, Russian forces have made slow but methodical progress in their advance and changed to a strategy of pummelling cities with artillery and airpower without regard for civilian casualties. In the north, the Russian goal is the encirclement of Kyiv in order to lay siege to the city. In the south, Mariupol is surrounded and isolated. Its eventual fall will free up Russian forces to pivot north in a pincer movement to cut off Ukrainian defenders in the Donbas region. A negative surprise is on the horizon and the southern and eastern front could collapse in the coming days.
On the other hand, this is the first large-scale offensive undertaken by the Russian Army since World War II. For some perspective on distances, the Russia-Ukraine border is roughly equivalent to the US-Canadian border from the Pacific Ocean to Wisconsin. The Russian Achilles Heel is supply logistics and Ukrainian forces have been successful in disrupting Russian supply lines. A commentary by Alex Vershinin, written in November 2021, focused on the Russian Army’s supply constraints as envisaged by NATO planners in case of an attack into NATO territories such as Poland or the Baltic States. Simply put, Russian forces are tied to their railroads for supply support:

Russian forces are tied to railroad from factory to army depot and to combined arms army and, where possible, to the division/brigade level. No other European nation uses railroads to the extent that the Russian army does. Part of the reason is that Russia is so vast — over 6,000 miles from one end to the other. The rub is that Russian railroads are a wider gauge than the rest of Europe. Only former Soviet nations and Finland still use the Russian standard — this includes the Baltic states.

Russian forces have a much smaller logistical tail compared to western forces.

Russian army logistics forces are not designed for a large-scale ground offensive far from their railroads. Inside maneuver units, Russian sustainment units are a size lower than their Western counterparts. Only brigades have an equivalent logistics capability, but it’s not an exact comparison. Russian formations have only three-quarters the number of combat vehicles as their U.S. counterparts but almost three times as much artillery.

The Russians don’t have enough trucks, and Ukrainians have been ambushing supply truck convoys.

The Russian army does not have enough trucks to meet its logistic requirement more than 90 miles beyond supply dumps. To reach a 180-mile range, the Russian army would have to double truck allocation to 400 trucks for each of the material-technical support brigades. To gain familiarity with Russian logistic requirements and lift resources, a useful starting point is the Russian combined arms army. They all have different force structures, but on paper, each combined army is assigned a material-technical support brigade. Each material-technical support brigade has two truck battalions with a total of 150 general cargo trucks with 50 trailers and 260 specialized trucks per brigade. The Russian army makes heavy use of tube and rocket artillery fire, and rocket ammunition is very bulky. Although each army is different, there are usually 56 to 90 multiple launch rocket system launchers in an army. Replenishing each launcher takes up the entire bed of the truck. If the combined arms army fired a single volley, it would require 56 to 90 trucks just to replenish rocket ammunition. That is about a half of a dry cargo truck force in the material-technical support brigade just to replace one volley of rockets. There is also between six to nine tube artillery battalions, nine air defense artillery battalions, 12 mechanized and recon battalions, three to five tank battalions, mortars, anti-tank missiles, and small arms ammunition — not to mention, food, engineering, medical supplies, and so on. Those requirements are harder to estimate, but the potential resupply requirements are substantial. The Russian army force needs a lot of trucks just for ammunition and dry cargo replenishment.

For fuel and water sustainment, each material-technical support brigade has a tactical pipeline battalion. These have lower throughput than their Western equivalents but can be emplaced within three to four days of occupying new terrain. Until then, fuel trucks are required for operational resupply.

The UK estimates that the war costs the Kremlin about £1 billion a day, which is a strain in light of the severe sanctions imposed by the West. The latest briefing from the Pentagon indicates that the Russians have committed roughly all of the forces arrayed at the beginning of the invasion, which is about 190K troops, which amounts to roughly 55% of all available ground troops. This compares to about 24% of US ground force commitment for the invasion of Iraq during Gulf War II. Retired Australian Major General Mick Ryan wrote:

In military operations, casualties and fatigue, as well as equipment losses, wear and tear, will decrease force strength over time. Rotation of forces is necessary for any missions of even medium length duration. Humans can only fight for so long before becoming non-effective.

While Kyiv is at risk of encirclement, current Russian force strength in the north is insufficient to create an effective cordon around the city. Most military analysts estimate that it would take about half of all  Russia’s invading forces to encircle Kyiv, which would be a stretch in light of military operations in the rest of Ukraine. Add to that the necessity of force rotation, the Russian High Command faces a problem. On the other hand, Ukrainians are receiving western aid in the form of anti-tank missiles and other weaponry, as well as a reported 40K foreign volunteers to help defend Ukraine. It’s a race against time to see if Ukrainian forces can hold out before Kyiv is besieged.

In summary, the Ukrainians are exposed militarily but the Russians are close to exhaustion and vulnerable to supply disruptions. If there is no settlement, this could be a long war that could last years. Western sanctions are certain to bite well before then and the Kremlin will face both military and domestic political problems.

Both sides have strong incentives to settle.

What does this mean for the stock market? One hint can be found in the price action of European stocks, which are the most sensitive to the Russia-Ukraine war. The Euro STOXX 50 ETF (FEZ) traced out a bullish island reversal similar to the ones seen in November 2020, July 2021, October 2021, and December 2021. The odds are that the latest reversal will also resolve in a bullish manner, which should positive for all risk assets.

Jeff Hirsch at Almanac Trader pointed out that the market has tended to weaken early in March and find a bottom around the sixth trading day of the month, which is today. The subsequent trend has been choppy but exhibited a bullish bias until the end of the month. 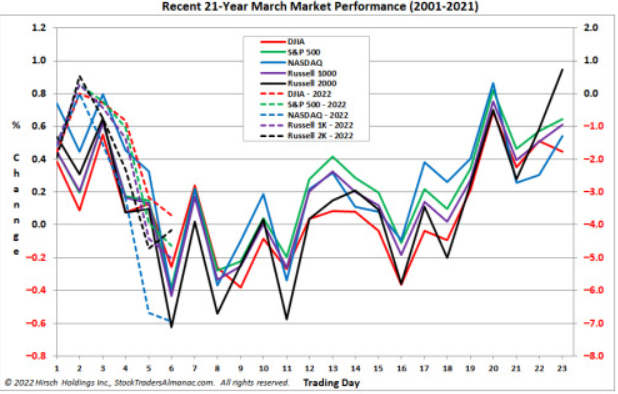 That sounds about right. Tomorrow morning’s CPI release and next week’s FOMC meeting promises to be sources of potential volatility.

In conclusion, stock prices have likely reached a short-term bottom, but the coming weeks could still be treacherous. My inner investor remains cautious, but my inner trader is still long risk.