Waiting for the sell signal – Humble Student of the Markets 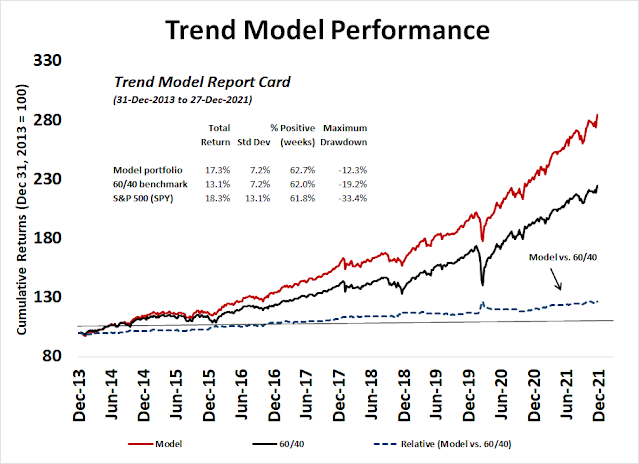 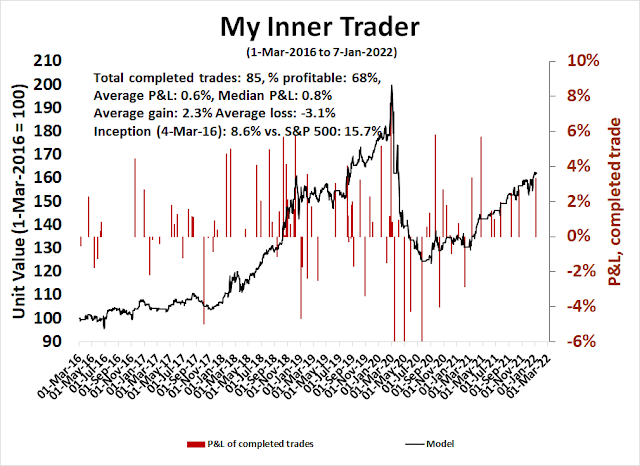 No sell signal yet

The S&P 500 took fright last week when the December FOMC minutes revealed a hawkish pivot and the stock market sold off. While I have become more cautious in the past few weeks, technical indicators have not flashed any intermediate-term sell signals just yet.
As an example, the NYSE McClellan Summation Index (NYSI) is only recycling from an oversold condition. In the last 20 years, few instances have resolved in a bearish manner (red vertical lines) and most have seen the market advance (black lines). 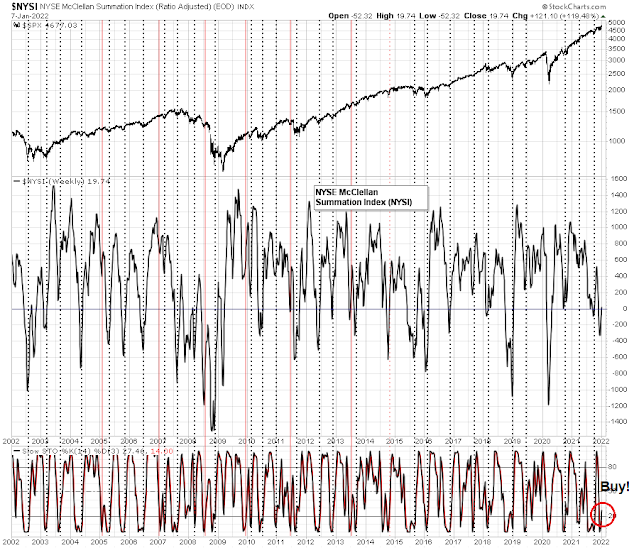 The market is increasingly vulnerable to a setback, but there is no need to become overly bearish just yet. Traders should wait for a sell signal first.

As an illustration of the market’s vulnerability, Mark Hulbert reported that newsletter writer sentiment remain stubbornly bullish despite last week’s air pocket, which is contrarian bearish. 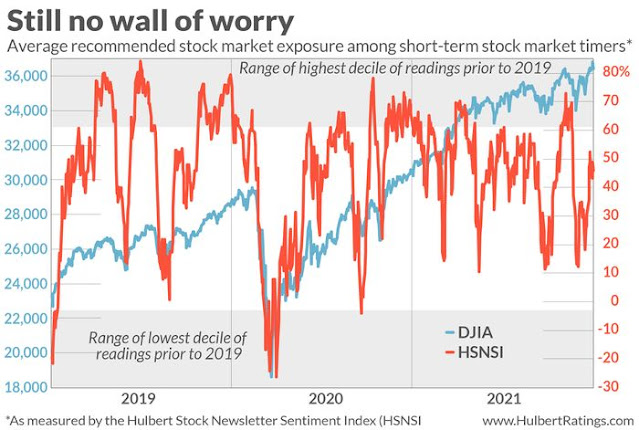 For an intermediate-term technical perspective of the market’s outlook, consider the evolution of price momentum. The S&P 500 has enjoyed a remarkable run since the March 2020 bottom. The percentage of S&P 500 stocks above their 200 day moving averages (dma) rose to over 90%. Past episodes (shaded areas) saw the market advance as internals flashed a series of “good overbought” conditions. Momentum began to fade in mid-2021 when the percentage of stocks above their 200 dma deteriorated below the 90% level. If history is to be any guide, this should resolve in a relatively benign manner. Cyclical indicators such as the ratio of consumer discretionary to staple stocks and the copper/gold ratio are trading sideways, indicating little macro stress. Investors should therefore expect a return to an environment of normal equity risk of 10% drawdowns. However, all of these episodes of fading price momentum have not ended until the percentage of S&P 500 stocks above their 50 dma have fallen to 20% or less (bottom panel). 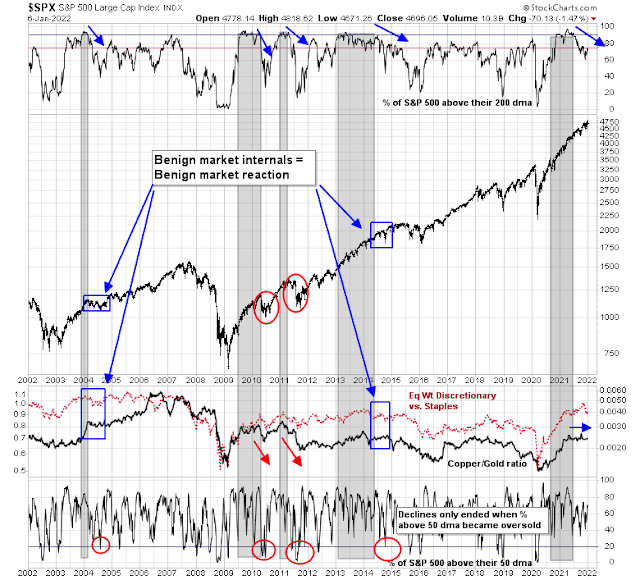 I am waiting for the next shoe to drop. 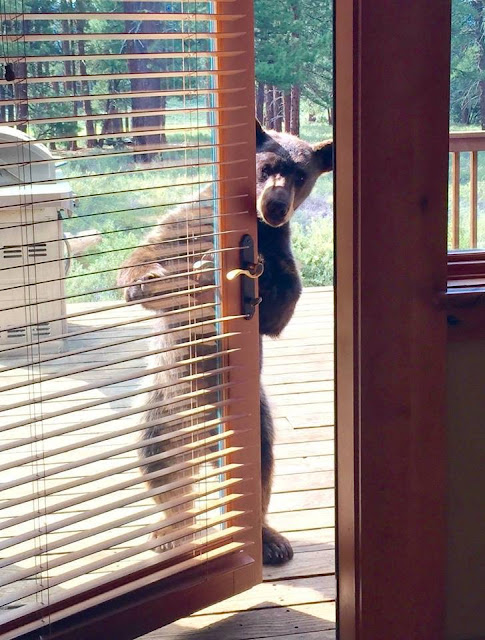 To be sure, market internals have begun to deteriorate and the bulls are losing control of the tape but the market remains resilient. The S&P 500 achieved new highs while flashing negative RSI divergences. What is remarkable, however, is the strength in breadth. While breadth internals were negative a month ago, they have recovered since. NYSE highs-lows have risen from negative to positive. In addition, the percentage of S&P 500 stocks above their 50 dma is showing strength and well above the 50-60% zone that indicates short-term weakness. 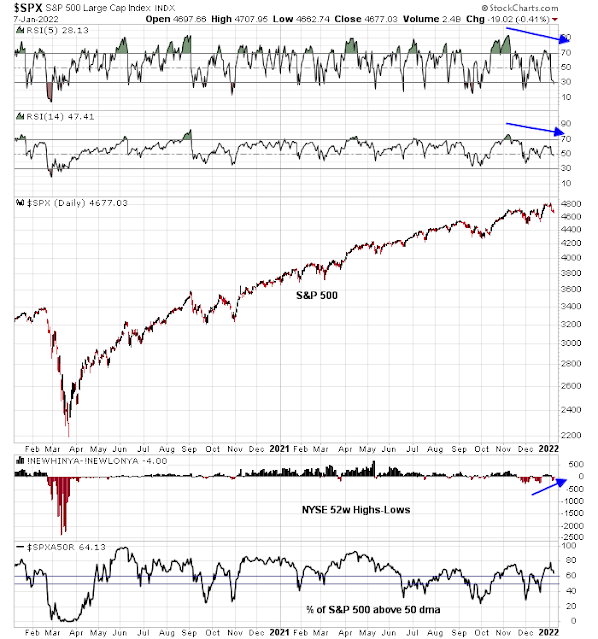 Tactically, I am monitoring the intermediate-term breadth momentum oscillator (ITBM) for a sell signal. The 14-day RSI of ITBM is still in the overbought zone and a recycle back to neutral would constitute a sell signal. There have been 20 sell signals in the last five years, The market fell in 14 cases (red lines) and rose in six (grey lines), which is a remarkable record for this indicator. If and when this indicator flashes a sell signal, there will be plenty of downside opportunities left for short sellers to profit from. 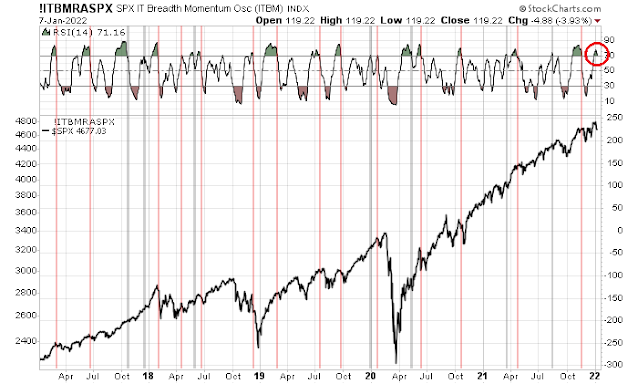 My Trend Asset Allocation Model remains at a risk-on reading for now. As a reminder, trend following models are not designed to spot the exact market top or bottom but to identify the trend. The trend remains weakly bullish. While I am not inclined to front-run model readings, I expect it will be downgraded to neutral in the coming weeks.

The stock market may be due for a relief rally before an intermediate-term sell signal. The S&P 500 reached an oversold level on its 5-day RSI as it tested its 50 dma on Friday. 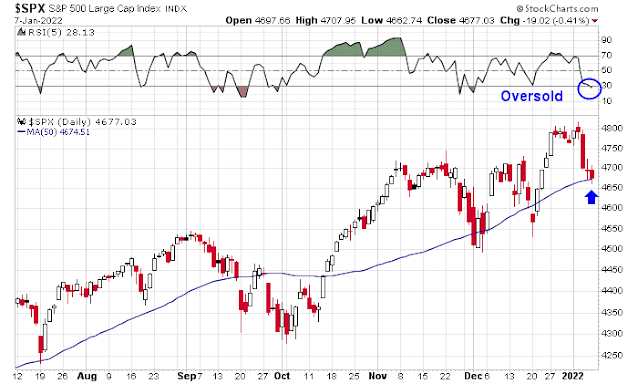 The recently beaten up growth stocks may be due for a bounce as well. The trailing 12-month return of NASDAQ 100 to S&P 500 is nearing a relative support zone that has seen the NASDAQ 100 rally strongly.

The health of any possible bounce will depend on the evolution of market internals. I will monitoring them for signs of either positive or negative divergences.

What does this mean for market participants? Investment-oriented accounts should take the opportunity to sell into strength and de-risk portfolios by reducing equity weights and rotating from high-beta into low-beta stocks. Traders should not turn bearish prematurely and wait for a sell signal first.
What could turn the market tone even more bearish?
Both Jerome Powell and Lael Brainard are expected to testify before the Senate next week in their confirmation hearings as Fed Chair and Vice Chair. While both are experienced central bankers who are unlikely to unintentionally let slip market moving remarks, anything is possible.
As well, all eyes will be on the CPI report due on Wednesday. Any hint of a hot inflation pressure will give the hawks on the FOMC more reasons to tighten. The current consensus expects a core YoY CPI of 5.4% and headline CPI of 7.0%, which are high bars for the inflation rate to clear.
In addition, the Omicron variant is running wild throughout the world. Researchers at Columbia University are projecting a rapid surge of US cases that peak between the first and third week of January. US case count is expected to peak at between three and eight million. This has the potential bring the economy to a screeching halt. 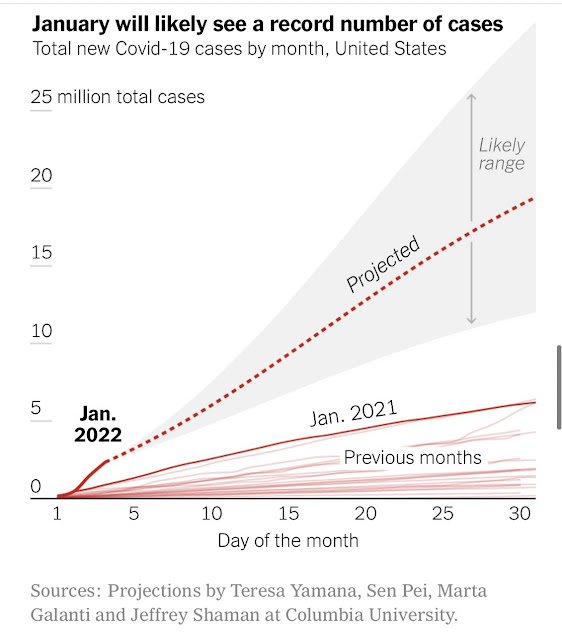 A wildcard is the news that French researchers have identified a new COVID variant B.1.640.2, dubbed IHU because it was found by a team from Méditerranée Infection University Hospital Institute (IHU) in Marseilles.
Not much is known about IHU. It was found in a vaccinated male patient who returned to France from Cameroon, developed mild symptoms, and it spread to 11 others. It’s far too early to panic over IHU. It’s unclear whether it’s more virulent or deadly than Omicron. In fact, it may be relatively benign as its identification predates Omicron. IHU was first sequenced on November 4, almost three weeks before Omicron was identified and sequenced.
While IHU may not be cause for panic, the real tragedy can be found in the November JOLTS report. Healthcare workers have been quitting in droves and at a higher rate than the overall quits rate, which has already skyrocketed. Healthcare workers are leaving just when we desperately need them and leaves us increasingly vulnerable to the emergence of new variants.

In closing, the market has become increasingly vulnerable to more setbacks. Equity risk appetite indicators (top panel) began diverging from the S&P 500 in early December. As a measure of extreme risk appetite, the bottom panel shows the relative performance of speculative growth stocks, as proxied by ARK Innovation ETF (ARKK) and the Social Sentiment ETF (BUZZ) against small-cap value stocks, which severely lagged the S&P 500 in 2021. These extreme risk appetite indicators are still falling, indicating further weakness in sentiment and internals. The bears are seizing control of the tape. 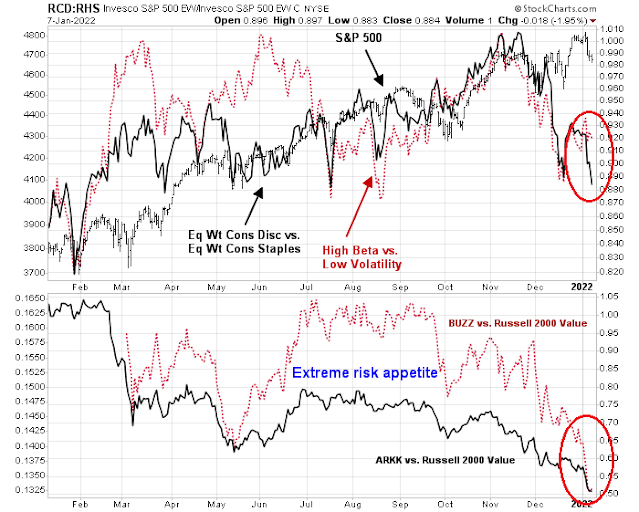 Long-term investors should position themselves cautiously by reducing equity weights. Traders, on the other hand, should not be overly eager to turn bearish. Wait for the tactical sell signal first.

23 thoughts on “Waiting for the sell signal”