China gets rich AND old, but… – Humble Student of the Markets

China has a well-known demographic problem: its working population is aging quickly. For years, many analysts have rhetorically asked whether China can get rich before it gets old. 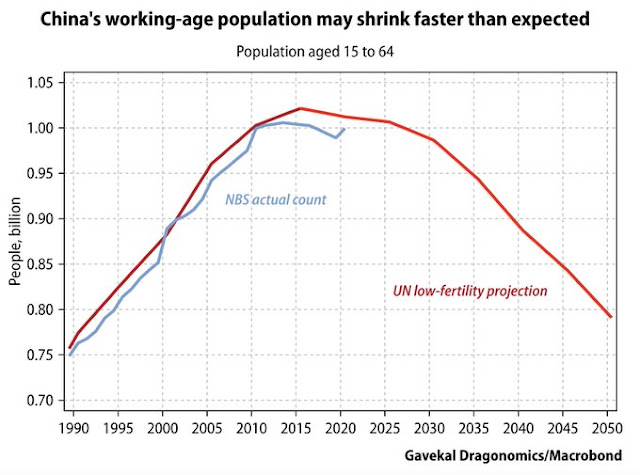 We have the answer. A recent McKinsey study found that China has beaten the US to become the richest nation. McKinsey found that China’s wealth rose from $7 trillion in 2000 to an astounding $120 trillion in 2020. By contrast, the US doubled its wealth to $90 trillion during the same period.
Be careful what you wish for. China becoming rich just as it begins to age is like the dog that caught the car but doesn’t know what to do next.

Here is the downside to being rich. The Financial Times pointed out that being rich in China is no picnic.

Among the 72 billionaires, 15 were murdered, 17 committed suicide, seven died from accidents, 14 were executed according to the law and 19 died from diseases.

As well, the growth in wealth was highly uneven and concentrated in real estate. China watcher Michael Pettis observed “the last time a country’s total wealth exceeded that of the US was in Japan around 1990. Its share of global GDP at the time was roughly the same as China’s today, and it was experiencing an even greater real estate bubble.” 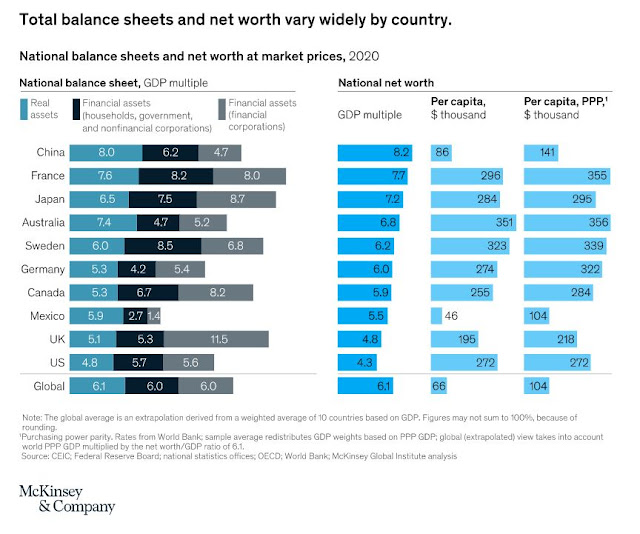 China may be facing the classic middle-income trap problem of development. Few countries have successfully made the migration from middle-income to high-income countries. Most have been small, such as South Korea and Taiwan, or levered their positions as trading, capital, and technology hubs to leap to advanced economy status, such as Hong Kong, Singapore, Cyprus, and Ireland. 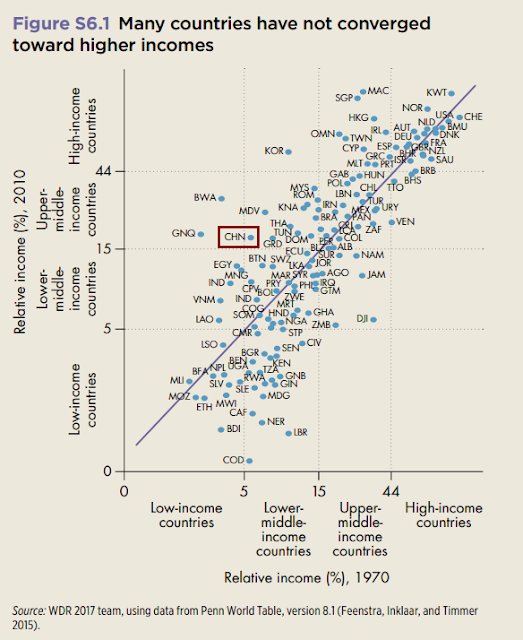 The World Bank explained the challenges of growth for middle-income countries this way:

Middle-income countries may face particular challenges because growth strategies that were successful while they were poor no longer suit their circumstances. For example, the reallocation of labor from agriculture to industry is a key driver of growth in low-income economies. But as this process matures, the gains from reallocating surplus labor begin to evaporate, wages begin to rise, and decreasing marginal returns to investment set in, implying a need for a new source of growth. Middle-income countries that become “trapped” fail to sustain total factor productivity (TFP) growth. By contrast, “escapees” find new sources of TFP growth (Daude and Fernández-Arias 2010). Indeed, 85 percent of growth slowdowns at the middle-income levels can be explained by TFP slowdowns (Eichengreen, Park, and Shin 2013).

The World Bank hit the nail on the head with its formulation of TFP growth as the key to avoiding the middle-income trap. China faces two main challenges in maintaining growth. First, its GDP growth at any cost model has incentivized provincial cadres to focus on unproductive credit-driven real estate growth. The teetering finances of China Evergrande and other property developers have exposed the limits of this growth model.

As well, it faces the more conventional problem of migrating up the value-added chain as “the gains from reallocating surplus labor…evaporate”, as per the World Bank. Indeed, the SCMP reported that vice-premier Liu He penned a long article in China’s Daily about Beijing’s plan to avoid the middle-income trap by relying on technological innovation.

“Since the end of World War II, there are many countries that have started the industrialisation process and even briefly stepped over the threshold of being a high-income country,” Liu wrote. “Yet only very few countries, such as South Korea, Singapore and Israel, have truly leapt over the middle-income trap.”

To become an advanced economy, China has to shift its growth model from a strategy “driven by inputs” to an approach “driven by technological innovation” – a process that is still in progress, according to Liu.

Liu’s article, which argues for China to embrace “high-quality” growth and lays out ways to achieve that goal, is consistent with the World Bank and the State Council’s joint report a decade earlier. Worries about the sustainability of China’s growth persists, and the role of innovation in solving that problem is highlighted.

What does “high quality” growth mean? First, it means avoiding low-quality growth such as credit-fueled growth based on investment in unproductive real estate. Moreover, it means a pivot to high value-added technology services from low labor cost manufacturing.

Yukon Huang and Jacob Feldgoise pointed out in an SCMP Op-Ed that virtually all countries have experienced declines in manufacturing. Taking the US as an example, the process of de-industrialization was accompanied by a surge in knowledge-intensive industries, which represented a bright spot in America’s growth path as shown by this Brookings study. As China attempts to move up the value-added chain, they argue that a Sino-American trade agreement for knowledge-intensive services would substantially benefit both sides. Whether there is sufficient political will in Washington and Beijing to complete such an agreement is an open question. 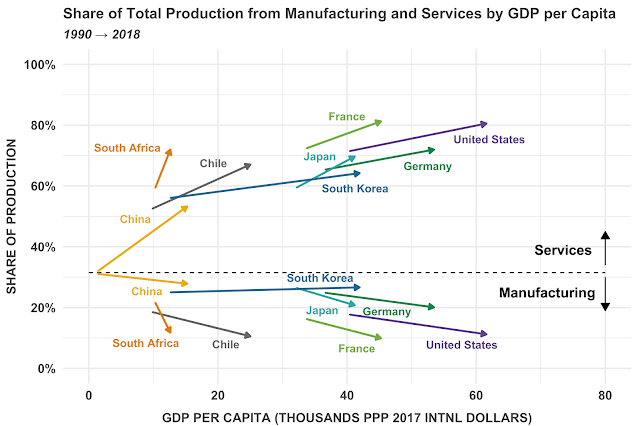 If that is the growth path laid out by Beijing, how is China doing?

Let’s start with real estate. The authorities have managed to stabilize the percentage of real estate investment in the economy and they are trying to slowly deleverage the industry. China recently cut its reserve ratio by 0.50%, which has been interpreted as an attempt to stabilize the financial system in the wake of the Evergrande default and the fragile finances of other property developers. Bloomberg reported the Poliburo’s concerns have pivoted to potential instability.

“The tone has turned much more dovish,” Macquarie Group Ltd. analysts led by Larry Hu wrote in a Monday note. “For the first time, the Politburo meeting uses the phrase ‘stability is the top priority.’ In other words, top leaders are deeply concerned about the risk of potential instability.” 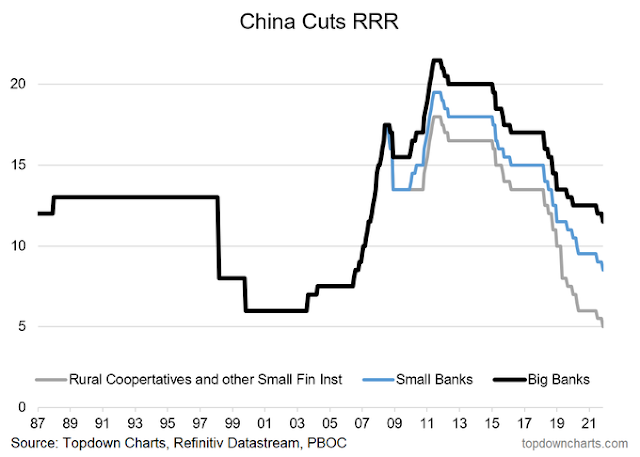 The key question is whether RRR cut affects the real economy or just asset prices. A discouraging sign comes from bond issuance data, which is rising in all sectors except for services. In the short term, however, strength in real estate and construction financings indicates an easing in financial conditions. As Beijing looks ahead to the Winter Olympics and the 20th Party Congress in 2022, the authorities are easing but for political reasons. 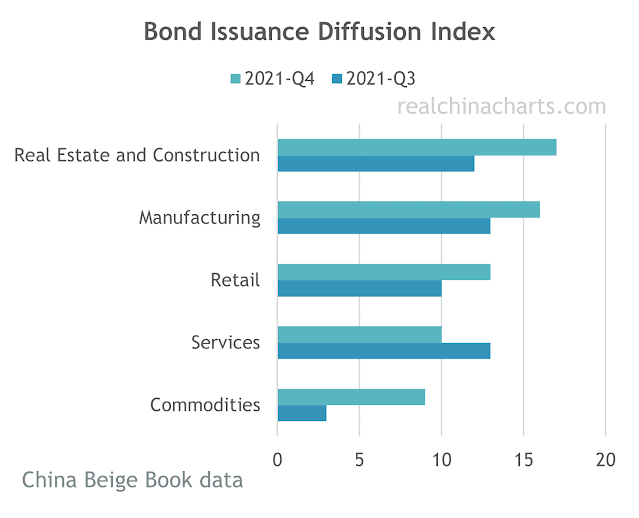 As a way of addressing the distrust of China’s official economic statistics, I rely on market-based indicators to measure the health of the Chinese economy. A month ago, weakness in commodity prices were signaling weakness in Chinese growth (see Commodity weakness = Global slowdown?).
The latest update shows that China is stabilizing. While the relative performances of MSCI China and Hong Kong to the MSCI All-Country World Index (ACWI) are still falling, the relative performances of the stock markets of China’s other major Asian trading are either bottoming or starting to turn up. I interpret this to tactically mean that the worst of the fears of a China downturn is over. For investors, this translates an ungrade from an underweight position to a neutral weight in China and other Asian markets. 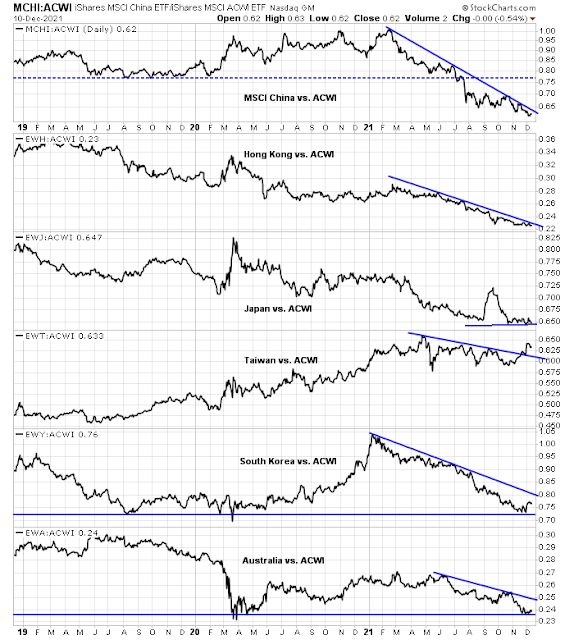 In conclusion, China faces many long-term challenges. In the short run, excess credit-fueled investment in real estate is raising alarms about instability. Longer-term, the economy needs to successfully pivot from reliance on low-cost labor as a source of export-driven growth to higher value-added knowledge industries. Tactically, real-time market-based data shows that China’s economy is stabilizing, which translates to a neutral weight in China and other Asian countries.

6 thoughts on “China gets rich AND old, but…”