Omi-what? – Humble Student of the Markets

Mid-week market update: The most recent stock market downdraft was sparked by the news of a new virus variant that was initially identified in South Africa and the Fed’s hawkish pivot. As evidence emerged that Omicron is more transmissible but less deadly, the market staged an enormous rip-your-face-off short-covering rally. Today, Pfizer and BioNTech reported that lab tests showed that a third dose of its vaccine protected against the Omnicron variant. A two-dose regime was less effective but still prevents severe illness. Here we are, the S&P 500 is within 1% of its all-time high again.

In the wake of the relief rally, the bulls still face the challenge presented by next week’s FOMC meeting. The risk of a hawkish Fed still looms.
Here are the short-term bull and bear cases from a chartist’s perspective.

One positive sign from the market’s exhibition of positive price momentum is the Dow traced out a bullish island reversal pattern, which is defined by the index falling through a downside gap and then reversing through an upside gap. The measured minimum upside target is roughly its all-time high.

The Omicron/Powell downdraft saw two down days on significant volume which is indicative of strong selling pressure. It began on Black Friday, which had 90.1% of NYSE volume on the downside. It was followed on Monday with a 89.4% downside day (red down arrows). According to Lowry’s, closely spaced downside days can be ominous if not quickly negated by a 90% upside day or two consecutive 80% upside days. Fortunately for the bulls, the market flashed two 80% upside days on Monday (80.0%) and Tuesday (85%, marked by blue up arrows). 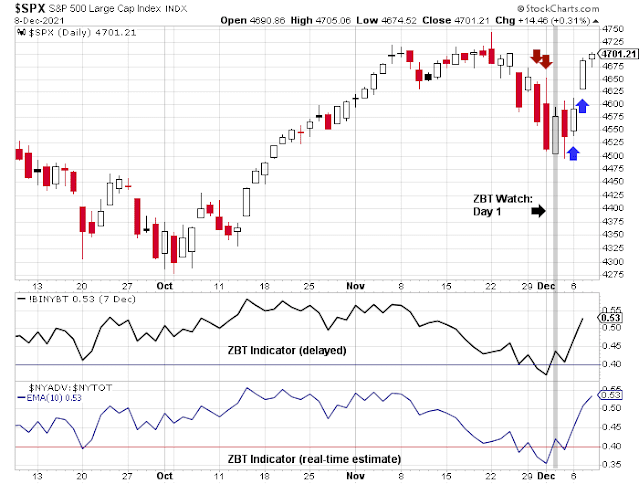 In addition, the market flashed a possible setup for a rare Zweig Breadth Thrust buy signal on December 2, 2021. A ZBT buy signal is triggered when the ZBT Indicator moves from an oversold condition to an overbought reading of 0.615 or more within 10 trading days. In all likelihood, the ZBT buy signal setup will fail. A buy signal would be unabashedly bullish for stocks, but a failure should not be interpreted in a bearish manner.
There have been six ZBT buy signals since 2004. The S&P 500 was higher in all cases after a year. The two “momentum failures” saw the market correct before prices rose. The rest continued to rally after the buy signal into further highs.

The end of the 10-day window is next Wednesday, which coincides with the announcement of the FOMC decision. Brace for possible fireworks.

While the bulls have staged an impressive show of positive price momentum, the bears may still be able to make a goal-line stand and turn the tide. The bulls can argue that the large-cap S&P 500 and mid-cap S&P 400 have held above their breakout levels. The bears can argue that the high-beta small-cap S&P 600 is struggling below resistance after a failed breakout. 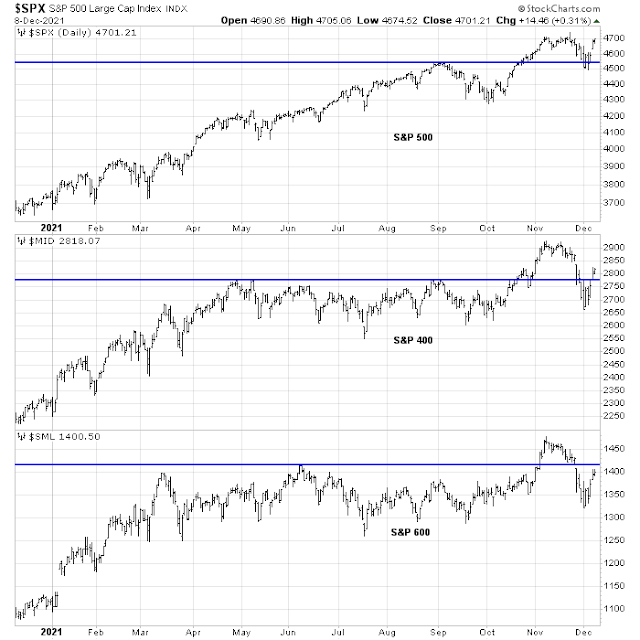 Equity risk appetite indicators are exhibiting a minor negative divergence. Keep an eye on this should these indicators deteriorate further.

As well, the risk of a hawkish Fed hasn’t disappeared. Fed Funds futures are anticipating three quarter-point rate hikes in 2022, with liftoff at the May FOMC meeting. Since the Fed has signaled that it will not raise rates until the QE taper is complete, all eyes will be on the pace of the taper and the expected pace of 2022 rate increases in the dot-plot next week. 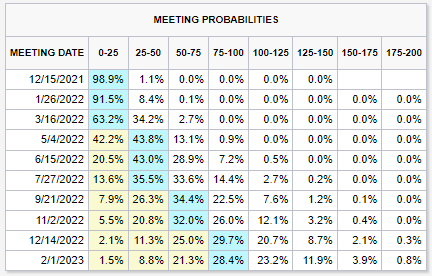 There is a severe disagreement between stock and bond market option markets. While the VIX Index has fallen dramatically as equities rallied, MOVE, which is the bond market’s VIX equivalent, has risen and remains highly elevated. 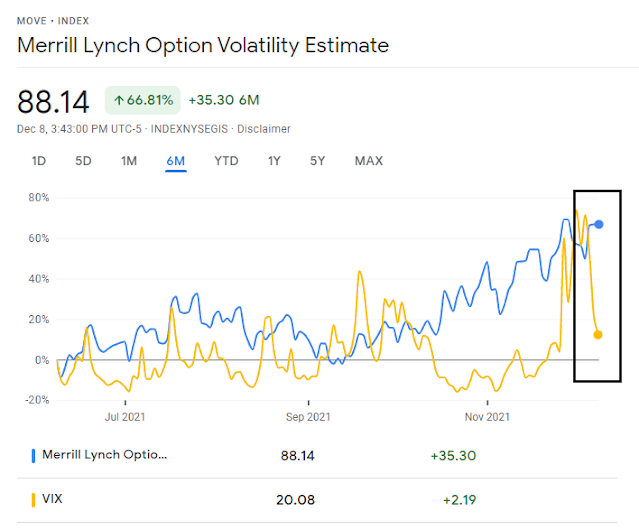 In conclusion, the S&P 500 is undergoing a high-level consolidation as it works off an overbought condition. 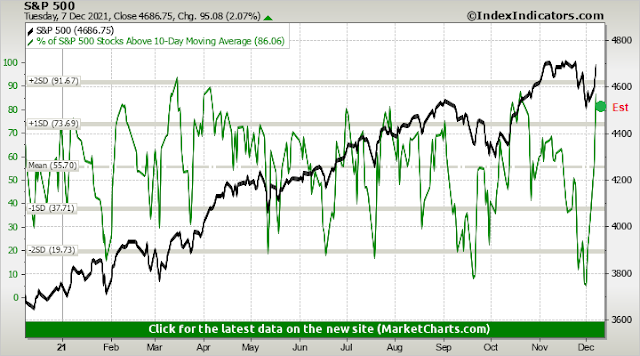 Much depends on the FOMC decision next week and how much tightening has been priced into the market. My inner trader remains bullish but he is becoming more cautious. Traders should properly size their positions in light of the increasing market.
Disclosure: Long SPXL