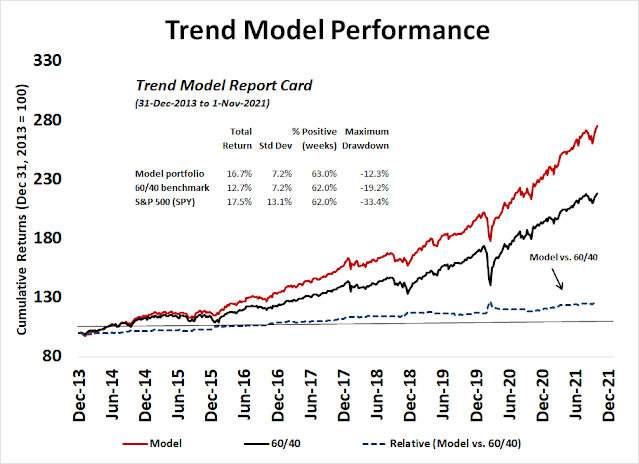 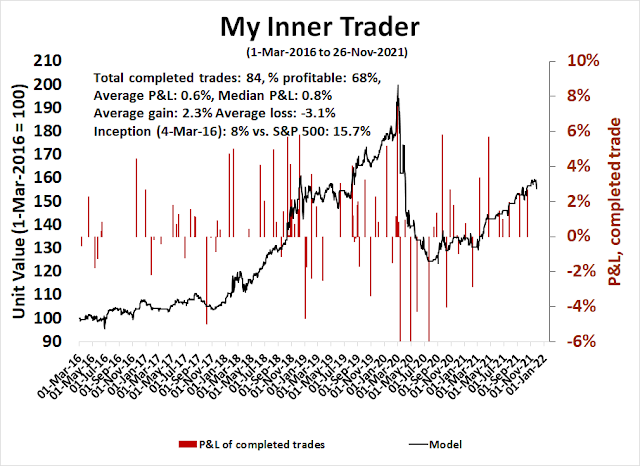 Researchers in South Africa are racing to track the concerning rise of a new variant of the coronavirus that causes COVID-19. The variant harbours a large number of mutations found in other variants, including Delta, and it seems to be spreading quickly across South Africa.
A top priority is to follow the variant more closely as it spreads: it was first identified in Botswana this month and has turned up in travellers to Hong Kong from South Africa. Scientists are also trying to understand the variant’s properties, such as whether it can evade immune responses triggered by vaccines and whether it causes more or less severe disease than other variants do.
“We’re flying at warp speed,” says Penny Moore, a virologist at the University of Witwatersrand in Johannesburg, whose lab is gauging the variant’s potential to dodge immunity from vaccines and previous infections. There are anecdotal reports of reinfections and cases in vaccinated individuals, but “at this stage it’s too early to tell anything,” Moore adds.
“There’s a lot we don’t understand about this variant,” Richard Lessells, an infectious disease physician at the University of KwaZulu-Natal in Durban, South Africa, said at a press briefing organized by South Africa’s health department on 25 November. “The mutation profile gives us concern, but now we need to do the work to understand the significance of this variant and what it means for the response to the pandemic.” 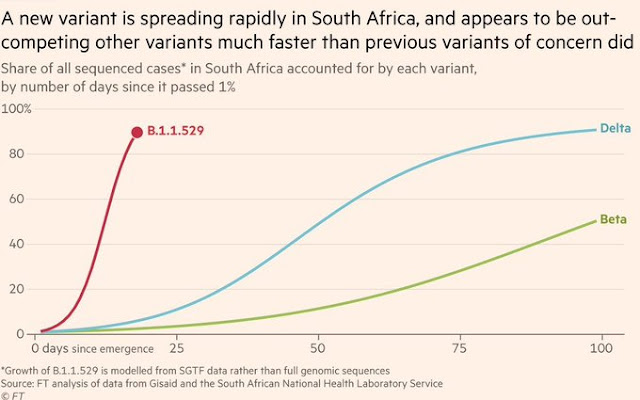 When COVID-19 first came out of nowhere in early 2020, the global economy shut down and the markets crashed. Could we be seeing the start of COVID Crash 2.0?

There are some parallels to the 2020 experience. The stock market was already exhibiting technical stress even before the onset of COVID-19.
The standard technique for calculating a Bollinger Band (BB) is to put a two standard deviation band around a 20-day moving average (dma). As a demonstration of how strong the recent advance has been, the S&P 500 approached the top of the 200 dma BB and stalled. In the last five years, there have been six episodes of 200 dma BB rides. In five of the instances, the top was signaled by a negative RSI divergence, which is the case today. Half of them resolved with significant downdrafts (circled in red) and the other half ended with a sideways consolidation. 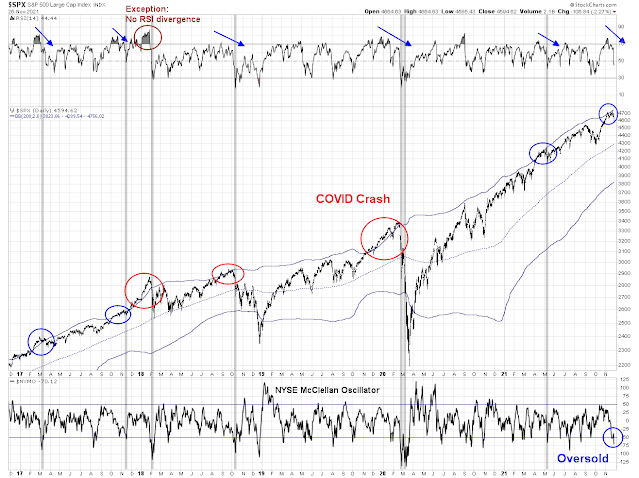 If the latest round of market weakness is a just plain vanilla pullback, the latest stall is likely to be benign. That’s because the market saw an initial bottom when the NYSE McClellan Oscillator (NYMO) has already reached an oversold level. The caveat is oversold markets can become more oversold. During the COVID Crash, market internals blew past oversold conditions to reach extreme levels very quickly.
In fact, three of the four components of my bottoming models have flashed buy signals. The VIX Index has spiked above its upper Bollinger Band, NYMO is oversold, and so is the 5-day RSI. Only the term structure of the VIX hasn’t inverted, but it’s very close. However, the COVID Crash was an exception to the rule for these buy signals, 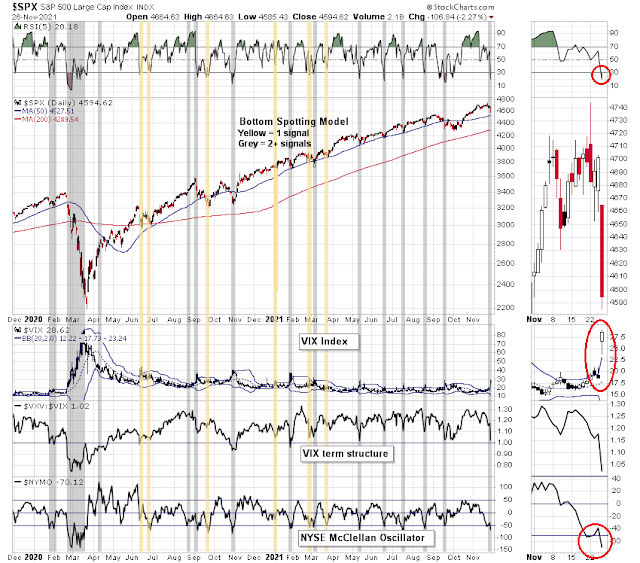 Another breadth indicator, the percentage of advancing-declining volumes, fell to an oversold extreme on Friday. This has usually led to short-term bounces. To be bearish here means you are betting on another COVID Crash. 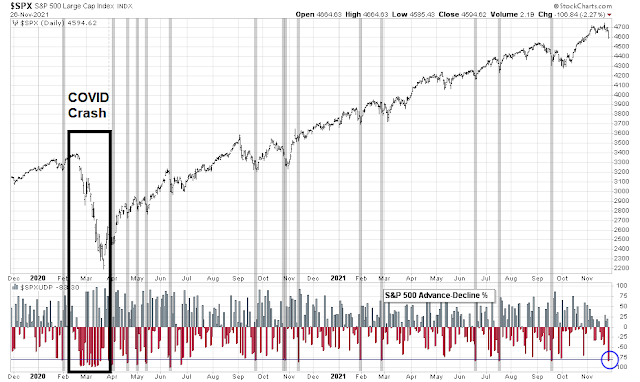 Here are some key differences between today and 2020. Global healthcare systems were completely unprepared when COVID-19 first appeared in early 2020. China reacted by completely shutting down its economy. Hospitals in northern Italy, which is the wealthiest part of the country in a G-7 nation, were overwhelmed and the death rates were horrific. There were no treatments available. The only solution was a lockdown in order to reduce the transmission rates (remember “flatten the curve”) in order to buy time for researchers to find vaccines and treatments.
Fast forward to 2021. Vaccines and treatments are available. Any lockdowns are likely to be relatively temporary. However, there are some key unanswered questions about the new Omicron variant.
Equally important is the policy reaction. Prior to the emergence of Omicron, Fedspeak had turned hawkish. Two Fed governors and San Francisco Fed President Mary Daly, who is considered to be a dove, all supported a faster taper of QE purchases. In addition, Reuters reported that when Biden announced the re-nomination of Jerome Powell as Fed Chair and Lael Brainard as Vice-Chair, both turned their focus to inflation.

“We know that high inflation takes a toll on families, especially those less able to meet the higher costs of essentials, like food, housing and transportation,” Powell said in comments alongside Biden and Brainard. “We will use our tools both to support the economy – a strong labor market – and to prevent higher inflation from becoming entrenched.”
Brainard added she too was committed to putting working Americans at the centre of her agenda. “This means getting inflation down at a time when people are focused on their jobs and how far their paychecks will go,” Brainard said.

The November FOMC minutes, which were released last Wednesday, also contained some surprises. It seems that the Fed is reacting to market pressures on inflation, even though the official view remains in the transitory camp.

Participants generally saw the current elevated level of inflation as largely reflecting factors that were likely to be transitory but judged that inflation pressures could take longer to subside than they had previously assessed.

Last week’s hawkish Fedspeak was confirmed by the minutes, which is signaling an acceleration in the pace of taper.

Some participants suggested that reducing the pace of net asset purchases by more than $15 billion each month could be warranted so that the Committee would be in a better position to make adjustments to the target range for the federal funds rate….

In the wake of the Omicron news, the WSJ reported a dramatic shift in Fed Funds expectations.

Federal funds futures, a proxy for market expectations of interest rate changes, shifted downward Friday, with the market anticipating that the Federal Reserve will keep interest rates low for longer. CME Group data showed the majority of investors are now pricing in two or three, quarter percentage-point rate increases by the end of 2022, compared with three or four on Wednesday. Equivalent measures of interest-rate expectations for the eurozone and the U.K. also shifted downward.

As the markets reacted to the news of the new variant on Friday, some market anomalies have appeared signaling that the latest risk-off episode is a buying opportunity rather than COVID Crash 2.0. Friday’s market action is indicative of an irrational panic rather than reasoned reaction to events.
Treasury yields understandably fell dramatically during this risk-off episode. But if the B.1.1.529 is truly a threat to the global economy, expect the Fed to downgrade its hawkish views in light of the downside threats to growth. If that’s the case, why did the yield curve initially experience a parallel shift downwards in the 2-10 year range (though it did flatten later in the day)?

A survey of case counts shows that the situation had deteriorated badly in Europe compared to other regions. When global markets took a risk-off tone, why did EURUSD surge? The USD is normally a safe haven during periods of crisis. Instead, the greenback weakened. 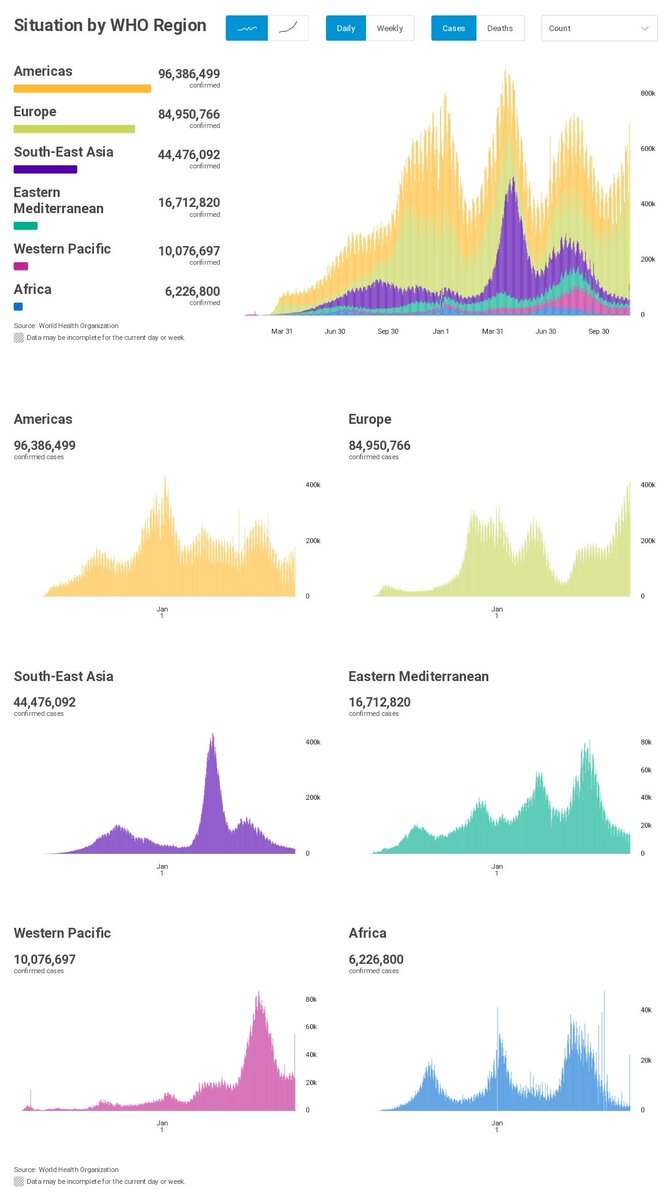 Notwithstanding the latest panic, high frequency economic data had been improving. The Economic Surprise Index, which measures whether economic releases are beating or missing expectations, has been rising. 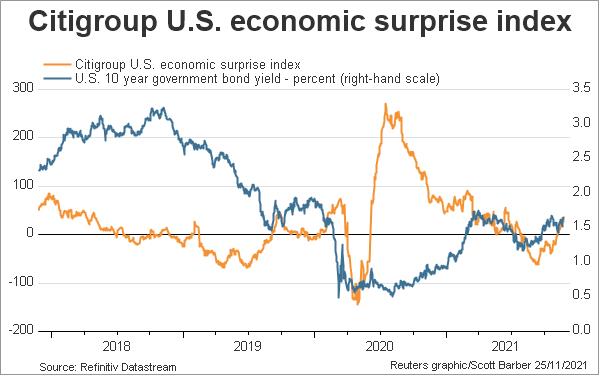 Similarly, the San Francisco Fed’s daily news sentiment index, which tracks the tone of economic news, has recovered after a brief dip. 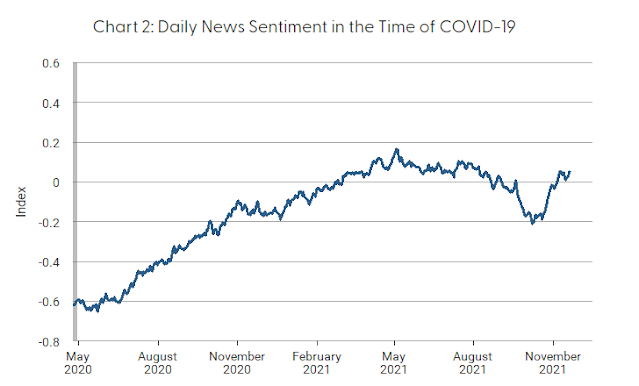 In 2021, every variant sell-off has turned out to be a buying opportunity. The latest sell-off is likely to be another.
Take a deep breath and relax. The latest mRNA technology is well-positioned to react to new variants  should current vaccines and treatments fail. Central bankers are poised to ease should growth disappoint. The latest risk-off episode represents a washout panic and a probable near-term bottom.
Buy the dip.
Disclosure: Long SPXL