A range-bound August? – Humble Student of the Markets 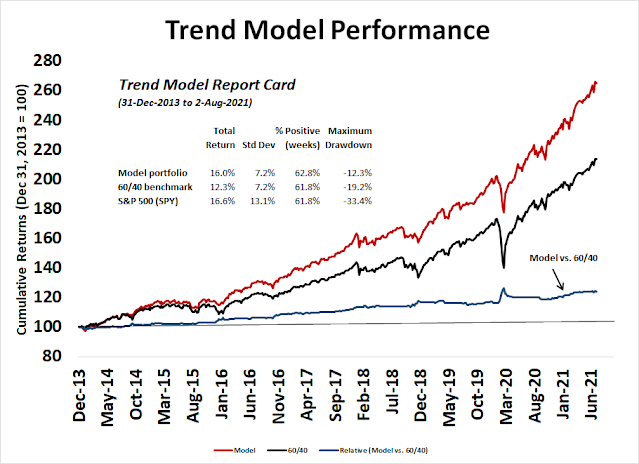 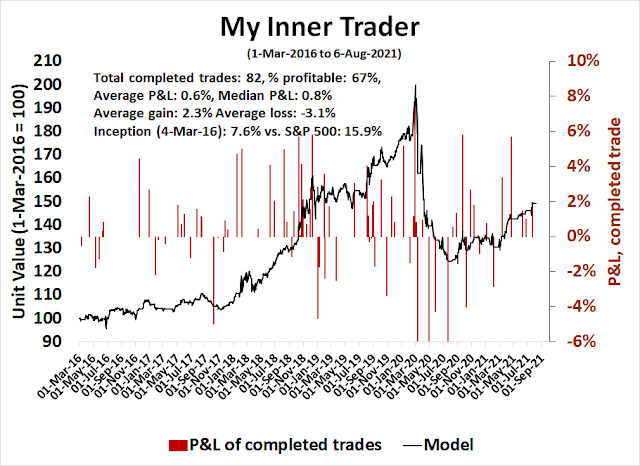 Regular readers will know that I have been calling for a sideways holding pattern for the S&P 500. That remains my base case scenario for the rest of August. Continuing concerns about the Delta variant stalling growth are likely to put downward pressure on risk appetite. On the other hand, an improving EPS growth outlook is putting a floor on stock prices. 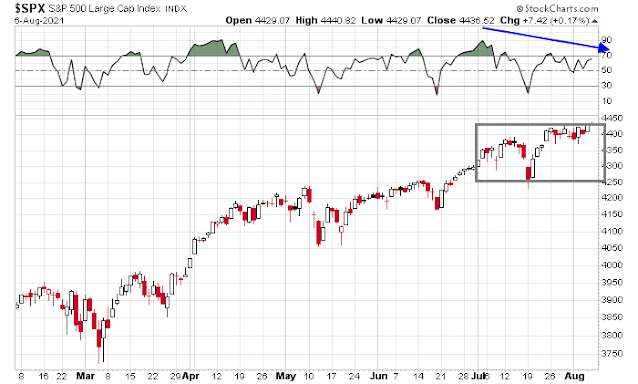 To be sure, the S&P 500 made a marginal new high on Friday, but the market’s less than enthusiastic reception to Friday’s strong jobs report is indicative of the market’s internals and makes my case that the stock market is likely to be range-bound. On the surface, the S&P 500 advance. Looking under the hood, the yield curve steepened and cyclical and value stocks rallied, while growth stocks fell.

I have some good news and bad news about COVID-19. The bad news is well-known. Almost every day, the media is full of stories about rising infections, especially among the unvaccinated. Events are being cancelled and people are forced to change their behavior. The good news that is US vaccination rates are slowly rising, and the virulent Delta variant has shown itself to peak after two months.
The accompanying chart shows the progress of new case counts per million in India, where the Delta variant first appeared and there were few vaccinated people, and in the UK, which is struggling with the Delta variant but has a highly vaccinated population. In both instances, the infection rate peaks about two months after it first appeared. The rise and fall in the UK case count was steeper than India’s, likely owing to the higher British vaccination rate. In the US, the duration of the ascent in case counts has been a month. Using the India and UK as templates, this puts the US peak in about early September. 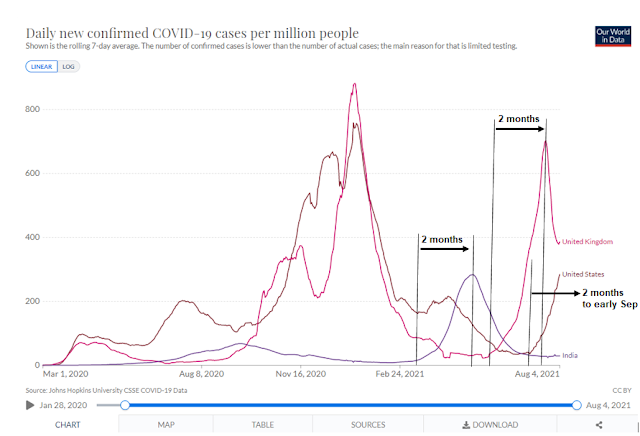 The markets have responded cautiously to these developments. The relative performance of cyclical sectors and industries have stopped falling and they are moving sideways. I interpret these conditions as the market believes the worlds of the growth pause is over, but it is waiting for a new catalyst before launching a new bullish or bearish impulse. 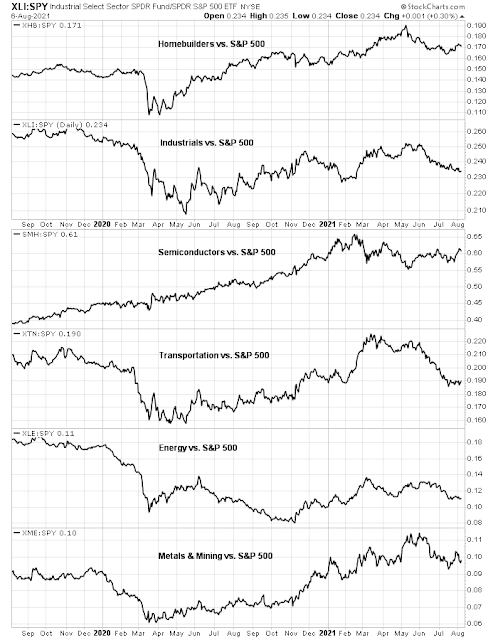 Another bullish consideration is the strength of Q2 earnings results. Both the EPS and sales beat rates are astoundingly high by historical standards and the EPS beat rate would be the highest on record since FactSet started maintaining statistics in 2008. As a consequence, forward 12-month EPS estimates are surging. 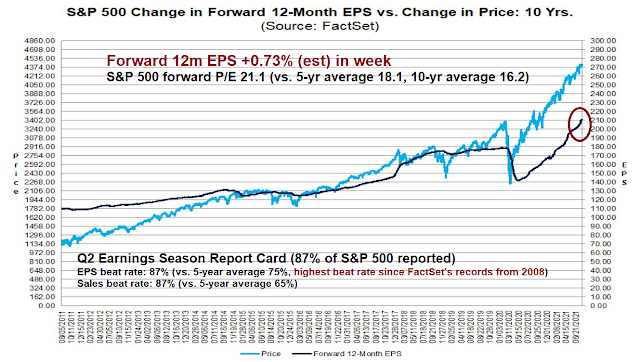 If earnings estimates rise and prices are stable, the forward P/E ratio declines. So far, the S&P 500 forward P/E is nearing the bottom of its post-COVID range, which makes the market more attractive, especially in light of a falling 10-year Treasury yield. 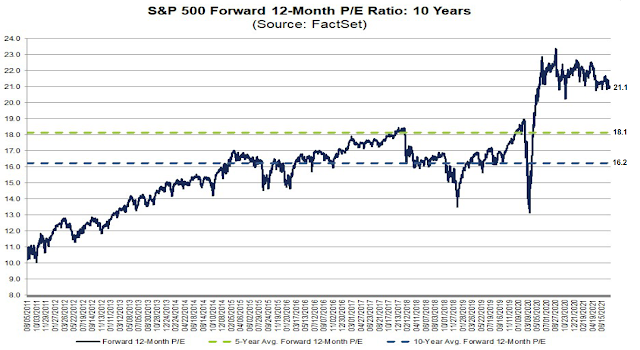 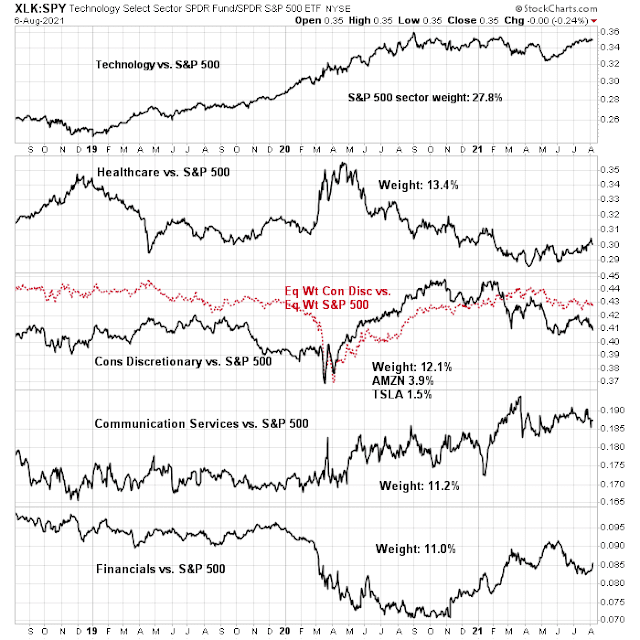 These conditions indicate that the market is marking time and waiting for either a bullish or bearish catalyst. I am reserving judgment until the Russell 2000 breaks out of its tight range. One hopeful sign for the bulls is the Russell 2000 to S&P 500 ratio may be trying to turn up against the S&P 500. 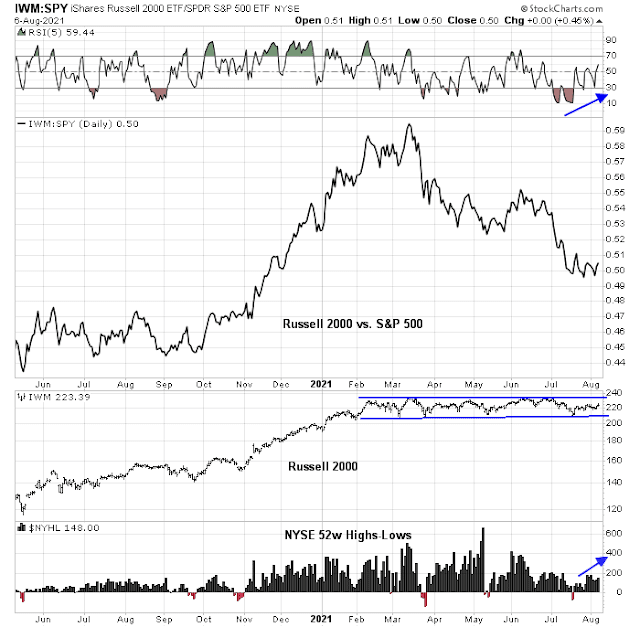 Similarly, the value and growth cycle has been trading sideways in the last month.

The most likely scenario is a continued sideways pattern for another month until it becomes evident that the worst of the Delta variant has run its course, which would be followed by a cyclical and value stock rally. The bearish scenario is a legislative impasse in Washington, either over the debt ceiling or the infrastructure bill. In that case, watch for renewed concerns over economic growth, dovish Fed, falling bond yields, and rising risk aversion.

27 thoughts on “A range-bound August?”