The brewing crisis in Crypto-Land – Humble Student of the Markets

There has been much debate over the usefulness and viability of crypto-currencies. Notwithstanding my opinion on the topic, the current crypto-currency ecosystem has an Achilles Heel of Lehman Crisis proportions. 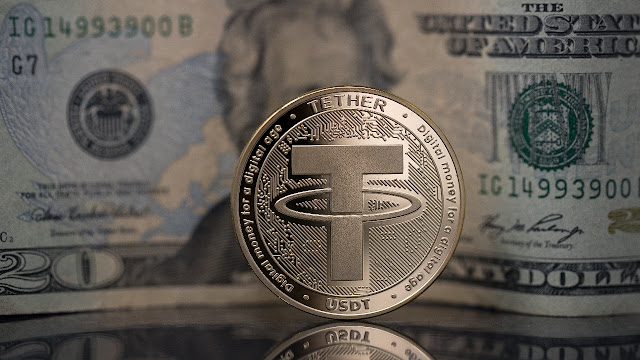 It’s called Tethers, which is a stablecoin used as a critical piece of plumbing in the offshore crypto markets. This week, I explain:

What is a digital token?

There is nothing inherently nefarious about digital token. A digital token is simply a digital way of paying for goods and services that is not issued by a central bank. Unlike a cryptocurrency, a digital token has little price volatility, which is why it’s called a stablecoin.
The idea has been around for a long time. For example, frequent flyer miles issued by different airlines is a form of digital tokens. They can be redeemed for services, such as flights, hotel stays, and so on; their value is relatively stable, and they are not issued by a central bank. In China, many vendors do not accept cash as a form of payment. Instead, they take Alipay, which is a payment system administered by Alibaba. Alipay is also a form of digital token not issued by the PBoC. Facebook appears to be trying to go down the Alipay route. Mark Zuckerberg recently characterized the company as a metaverse, which brings up the question of whether anyone wants Facebook to know about all of your digital activities, but that’s another discussion altogether.
Here is why stablecoins matter in Crypto-Land. In relatively regulated jurisdictions like the US, individuals can buy and sell crypto-currencies using a service like Coinbase with USD. As Coinbase is an onshore entity, it is required to perform “know your client” due diligence inquiries to curb money laundering before anyone opens an account. It’s more difficult to be anonymous with a Coinbase account.
So far, so good.
Here is where the story gets more interesting. Crypto-currency traders can become more anonymous and access high levels of leverage in offshore exchanges like Binance, Bit-Z, and HitBTC.
Here is how the transaction works. You buy your crypto-currency on Coinbase and transfer the proceeds to an offshore exchange. The attraction of offshore exchanges is they allow leverage as much as 100 to 1, which can be useful for magnifying gains for traders willing to gamble on big gains.
But offshore exchanges are unbanked, meaning they don’t have direct access to the US financial system. Few US institutions are willing to serve as their correspondent bank for regulatory anti-money-laundering reasons. Most offshore crypto exchanges will not accept USD as deposits. (Binance US, an affiliate of Binance, does allow USD purchases, but its volumes are minuscule and not significant to our story).
The workaround to the problem is a stablecoin. If you sell a crypto-currency in an offshore exchange, you receive a token issued by an offshore entity. The most popular are Tethers, a stablecoin issued by Tether Ltd. The company claims that Tethers are backed one-to-one by USDs.

The problem with Tethers

Owing to their one-to-one USD relationship, Tethers are in effect a money market fund. The concern is that with little transparency over what’s backing the tokens, there’s a risk that Tether breaks the proverbial buck in a similar way to what happened to the Reserve Primary back in 2008 when its net asset value suddenly dipped below $1 thanks to a mix of huge outflows and the bankruptcy of Lehman Brothers, which rendered its commercial paper suddenly worthless. That sent a shockwave through the wider market as it grappled with the idea of potential losses on money market funds which had always been assumed to be safe and money-like.
The company disclosed that most of its reserves are invested in AA-rated USD commercial paper (CP).

This makes Tether Ltd. one of the biggest players in the CP market in the world. 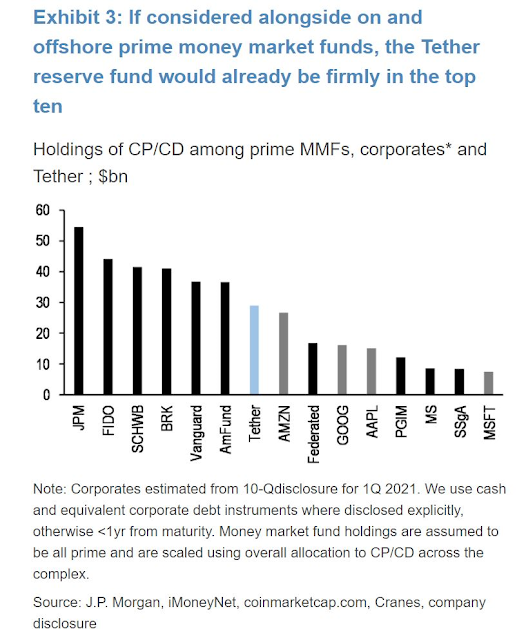 Here is where the conspiracy theories begin to proliferate. Commercial paper is short-term funding for creditworthy corporate borrowers. Tether Ltd. is supposed to be a huge participant in the CP market, but few dealers have heard of it. Either Tether Ltd. is engaged in fraud and the tokens are not fully backed by its reserves, or the company has found a large but unknown issuer. Tether’s reserves are over $60 billion. Assuming the company isn’t engaged in fraud, who could be issuing that much CP in USD?
The answer is Chinese paper, specifically troubled property developers like China Evergrande, whose share price has collapsed and whose bonds are trading at over a 50% discount to par. S&P recently downgraded China Evergrande’s rating two notices from B- to CCC, which is the lowest level of junk. Oops!

Fitch Ratings recently issued a warning about the possible contagion risks of stablecoins.

The rapid growth of stablecoin issuance could, in time, have implications for the functioning of short-term credit markets, says Fitch Ratings. Potential asset contagion risks linked to the liquidation of stablecoin reserve holdings could increase pressure for tighter regulation of the nascent sector.
Contagion risks are primarily associated with collateralised stablecoins, varying based on the size, liquidity and riskiness of their asset holdings, as well as the transparency and governance of the operator, among other things.

A Lehman Crisis on the horizon?

Jim Cramer at CNBC issued a warning about Tethers and alleged that Tether is invested in Chinese CP and discussed the risks to Tethers and the crypto-currency ecosystem (YouTube link). Presumably, he would not be making such statements on the air without credible sources.
Stablecoins are a form of money market funds that are unregulated and trade offshore. In the past, money market funds that have “broken the buck” by failing to redeem at less than par have sparked digital bank runs which turn into disruptive risk-off events like the Lehman Crisis. Cramer discussed this possibility and pointed to a high degree of correlation between Bitcoin prices and Tether assets. This creates a chicken-and-egg question. Could a loss of confidence in Tethers spark a crypto-currency crash, or could a sell-off in crypto-currencies spark a run on Tether? Add leverage of up to 100 to 1 to the mix, and the ingredients for a sudden market dislocation are all there.
Here is how a Crypto-Panic might play out. Supposing that you hold a notional $100,000 cryptocurrency in an offshore exchange whose position can only be realized in Tethers and not USD. The news comes across the tape that Tether had invested 30% of its reserves in China Evergrande paper that’s trading at a 50% discount to par. Tether has broken the buck, and each Tether token is only backed by $0.85. Your notional cryptocurrency position is now worth only $85,000 – that’s assuming you are not using leverage.
Market players react by selling first and asking questions later. Everyone tries to cash out of their Tether tokens all at the same time. In order to meet redemption requests, Tether is forced to liquidate its portfolio. The bids for Evergrande paper evaporates, and the backing for each Tether token falls to $0.70. At the same time, traders sell out of their cryptocurrency long positions in order to realize Tethers to access USD. Some of the cryptocurrency positions are levered, which sparks a selling cascade. It becomes vicious feedback loop. That’s how market crashes happen.
During the Lehman Crisis, the monetary and fiscal authorities stepped in to stabilize the markets. Would they do the same if Tethers crashed? Don’t count on it. Investors chose to trade Tethers offshore and away from the prying eyes of regulators. They made their beds. Fitch Ratings came to a similar conclusion.

We believe authorities are unlikely to intervene to save stablecoins in the event of a disruptive event, partly owing to moral hazard. Authorities could step in to support dealers and prime MMFs should stablecoin redemptions lead to or amplify a wider CP sell-off, pressuring market liquidity and impeding new CP issuance.

The authorities have a solution to the possible crisis of confidence in Tether, namely the creation of a Central Bank Digital Currency (CBDC), or a central banked-backed stablecoin. The Bank of England and the European Central Bank are both seriously considering the issue by conducting studies. The Federal Reserve is also studying the problem by inviting public comment with a view to publishing a discussion paper by September. There is a wide range of views among policymakers. Fed governor Chris Waller has dismissed the utility of a CBDC in a recent speech. On the other hand, Jeanna Smialek of the NY Times reported that Fed governor Lael Brainard has been more supportive in a recent Q&A at the Aspen Economic Strategy Group.

“If we saw, in the absence of a central bank digital currency in the U.S., a proliferation of stable coins,” Lael Brainard says, “it could have some risks.”
“There are questions about what backs the stablecoins. There are questions about: Who do you hold responsible?”
“If you have the other major jurisdictions in the world with a digital currency” offering, she says, “I just can’t wrap my head around that.”
“I think we need to be in at the very beginning,” she says.

In conclusion, the development of crypto-currencies has been a West West, which is not unexpected in light of the newness of the ecosystem. Notwithstanding the numerous questions about the validity and usefulness of cryptocurrencies as an asset class, history shows that the development of new systems tend to be disorderly and prone to fits and starts, and accompanied by crashes and crises until some stability is imposed. However, the price of stability will come at a cost of greater transparency and regulation, which is contrary to the free-spirited and libertarian crypto-currency philosophy.
How all this eventually plays out, I have no idea. The crisis risk in Crypto-Land is a “this will not end well” story with no obvious trigger. I am not implying that Tethers will crash tomorrow and bring down the entire crypto-currency complex with it. In fact, FTX has a credit risk derivative product consisting of short Tether/long USD. It trades at an effective discount of about 2% a year, meaning that the market isn’t pricing a high level of default risk. However, anyone who becomes involved in Crypto-Land should be aware of the risks posed by offshore stablecoins like Tethers. 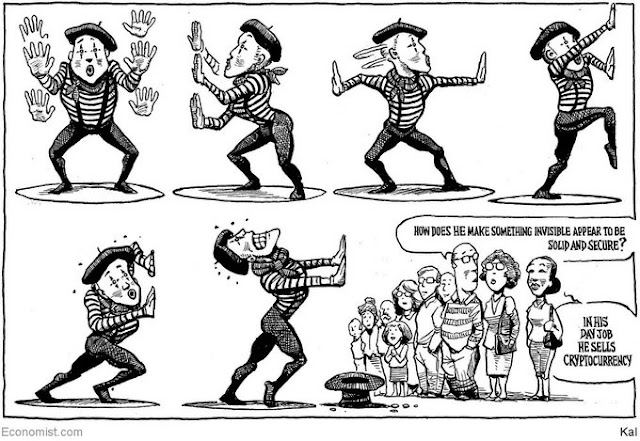 14 thoughts on “The brewing crisis in Crypto-Land”