Can stocks avoid the seasonal swoon? – Humble Student of the Markets

Mid-week market update: Evidence of a negative seasonal pattern has been circulating on the internet for the S&P 500. As one of many examples, LPL Financial pointed out that the S&P 500 has typically topped out in early August and slides into late September.

While past performance is no guarantee of future returns, will 2021 repeat the past seasonal pattern? Can the stock market avoid negative seasonality?
Here are the bull and bear cases.

In addition to the annual seasonality pattern, Ned Davis Research observed that the seasonal combination of a one-year cycle, four-year Presidential cycle, and 10-year Decennial Cycle patterns looks even uglier. 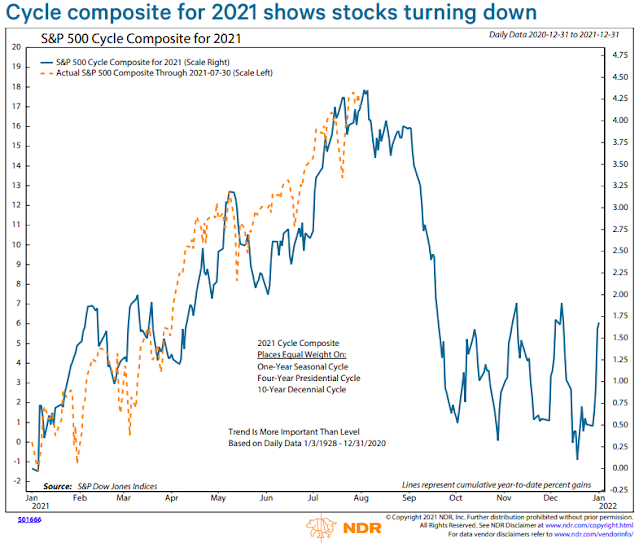 The negative seasonal pattern is also lining up with widespread bearish breadth divergences. 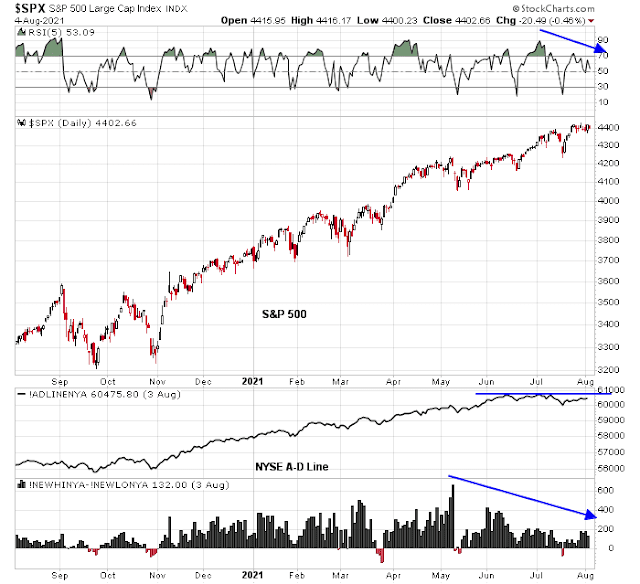 In addition, Marketwatch reported that Citigroup chief strategist Tobias Levkovich is being ultra-cautious:

Tobias Levkovich, chief U.S. equity strategist at Citi, says there’s an almost “palpable” sense that every 1% dip is a buying opportunity. “We are less convinced,” he said. “Fund managers fully concede that the rate of profit expansion will slide but most fear more upside and relative performance issues than a double-digit decline at the moment, yet they prefer a higher quality tilt to portfolios.”
It can’t last forever, can it? Levkovich is sticking with his 4,000 year-end price target for the S&P 500 — which means he thinks the market may drop by 10%. And he has a specific month in mind when it might, if not fall apart, at least get ropey. “The paucity of immediate catalysts for a pullback is cited regularly, although we worry about higher taxes, cost pressures eating into profitability, tapering and more persistent inflation all coalescing in September (typically the toughest month seasonally for the S&P 500),” he said.

As well, the BoA’s Sell Side Indicator is neutral, but it’s very close to a sell signal. 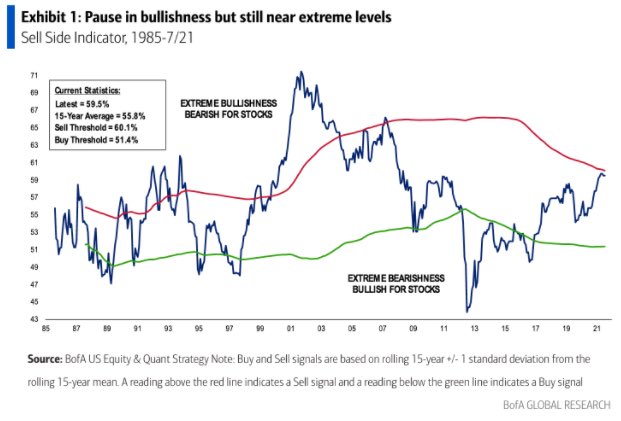 Lastly, Fed vice-chair Richard Clarida spooked the markets when he said in a speech today that the “necessary conditions for raising the target range for the federal funds rate will have been met by year-end 2022”.

While, as Chair Powell indicated last week, we are clearly a ways away from considering raising interest rates and this is certainly not something on the radar screen right now, if the outlook for inflation and outlook for unemployment I summarized earlier turn out to be the actual outcomes for inflation and unemployment realized over the forecast horizon, then I believe that these three necessary conditions for raising the target range for the federal funds rate will have been met by year-end 2022.

Notwithstanding Clarida’s hawkish remarks, Fed policy has been actually very dovish. This can be seen both from official statements and incoming data.
First, there is widespread expectation that the Fed would taper its QE purchases. In all likelihood, Fed policymakers will discuss a framework for tapering at its August Jackson Hole conference. The next question is timing. The July FOMC statement made an important point on this issue [emphasis added]:

Last December, the Committee indicated that it would continue to increase its holdings of Treasury securities by at least $80 billion per month and of agency mortgage‑backed securities by at least $40 billion per month until substantial further progress has been made toward its maximum employment and price stability goals. Since then, the economy has made progress toward these goals, and the Committee will continue to assess progress in coming meetings.

The phrase “assess progress in coming meetings” (plural) is an important clue about the timing of a tapering announcement. The FOMC meeting schedule is September, November, and December. The July FOMC statement implies that the earliest that a taper announcement will be at the November meeting. Fed vice-chair Richard Clarida also said today that the Fed has no intention of surprising the market on tapering, though he could see an announcement later this year.

In addition, Fed governor Lael Brainard also gave an important clue about the conduct of monetary policy in a speech to the Aspen Economic Strategy Group. On the subject of labor market recovery, she stated that she “expect[s] to be more confident in assessing the rate of progress once we have the data in hand for September”, indicating that the Fed needs to see confirmation of a labor market recovery in its September data, which will be available in early October.

Currently, it is difficult to disentangle the effects on labor supply of caregiving responsibilities brought on by the pandemic, fears of contracting the virus, and the enhanced unemployment insurance that was designed in part to address such constraints. Importantly, I expect to be more confident in assessing the rate of progress once we have data in hand for September, when consumption, school, and work patterns should be settling into a post pandemic normal.

These signals are consistent with the consensus expectation of a tapering announcement in late 2021, with actual action in early 2022.

However, recent data is supportive of a more dovish tone. The Citi Economic Surprise Index, which measures whether economic data is beating or missing expectations, has been falling. 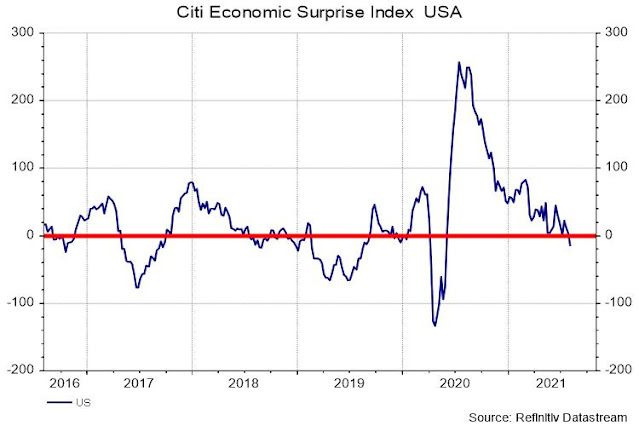 The data has been soft. As an example, today’s release of ADP Non-farm Employment Change badly missed expectations. This raises the likelihood of an NFP payroll miss on Friday.

As well, the Biden administrations partial eviction ban will serve to lessen the upward pressure on the Owners’ Equivalent Rent portion of CPI, which has a dovish effect on monetary policy.

In addition to a dovish tone from the Fed, investors also need to consider a number of other bullish data points. Goldman Sachs recently made a “cash on the sidelines” argument in the form of excess savings, which will translate to both investor demand for equities and more consumer demand that drives up sales. The high level of excess saving is evident not only in the US but globally. 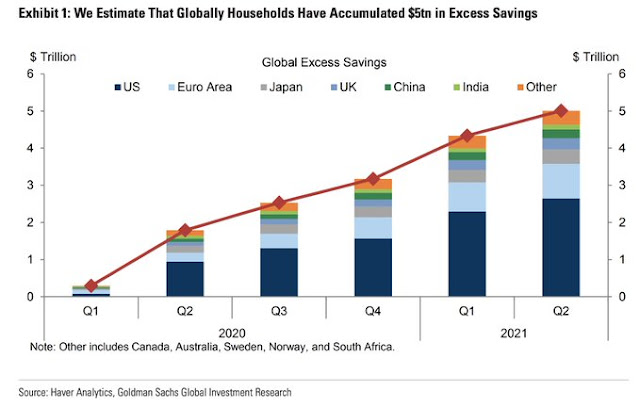 Macro Charts pointed out that markets are jittery. Option traders are extremely negative. These conditions have tended to resolve themselves in a bullish manner in the past. 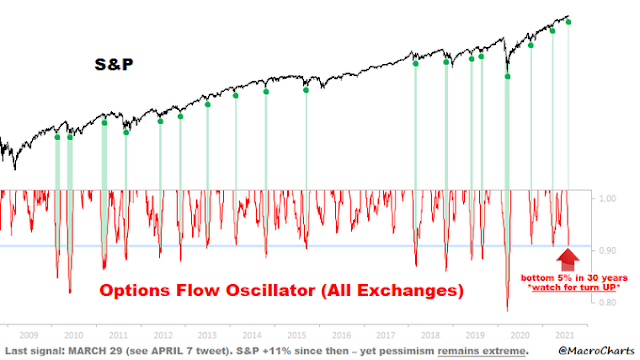 Where does that leave us? I continue to believe that the US equity market has bifurcated into a growth and value market. A rotation from value into growth has held the overall market up and the S&P 500 has been range-bound. This should continue until we see some catalyst for either an upside or downside breakout.
An upside breakout would likely be the result of a shift in narrative from worries about a Delta variant-related slowdown to renewed global growth. The main risk for a downside breakdown is the news of  higher corporate tax and minimum corporate tax legislation which sideswipes earnings growth expectations. The most vulnerable would be technology and drug companies. In particular, the healthcare sector has been a stellar outperformer in the last few months. These stocks are at risk of a sudden downdraft under such a scenario. 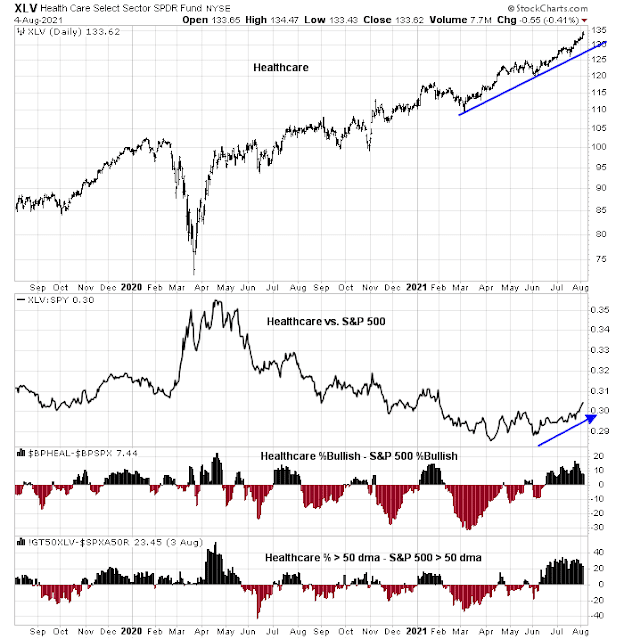 31 thoughts on “Can stocks avoid the seasonal swoon?”