Trading the gold flash crash – Humble Student of the Markets

Gold prices crashed overnight when a flood of sell orders hit the illiquid Asian markets. Prices fell below the 1700 mark but recovered. This has the smell of a margin clerk liquidation, which is often the sign of capitulation.

Is this an opportunity to buy gold?

The sudden downdraft took me and a lot of other analysts by surprise. Gold prices had everything going for it. On August 8, 2021 Jason Goepfert of SentimenTrader wrote the following constructive comment on gold miners:

Over the past 20 days, an average of fewer than 12% of gold miners were trading above their 50-day moving average, which is now starting to curl higher. 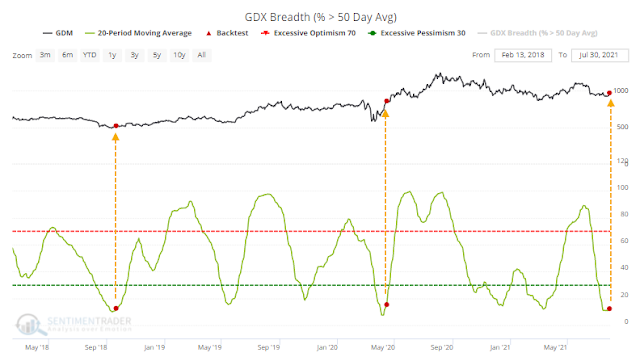 Gold prices had been the beneficiary of cross-asset price support until last Friday. The USD (inverted scale) had shown signs of weakness. TIPs prices were rising, which meant that real yields were falling. Both factors were bullish for gold prices. Gold had tested the 200 dma resistance. While the tests failed, that technical action could have been interpreted as a consolidation that occurs just before an upside breakout. 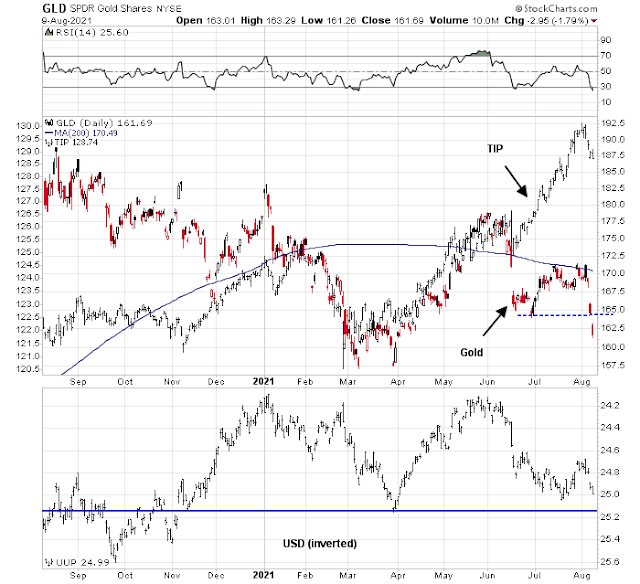 The roof caved in last Friday. The strong July Jobs Report steepened the yield curve, pushed down real yields, and strengthened the USD. Gold prices gapped down to test an important support level (dotted line). It crashed through support today.
Is this a buying opportunity?

Waiting for the washout

Not yet. The technical internals of the gold miners (GDX) has not reached levels that indicate washout and capitulation. I am waiting for the 14-day RSI to become oversold (top panel) and % bullish to fall to 30 or less (bottom panel). GDX is testing a key support zone right now. A true panic bottom is unlikely to form without an oversold condition on RSI and lower % bullish readings. 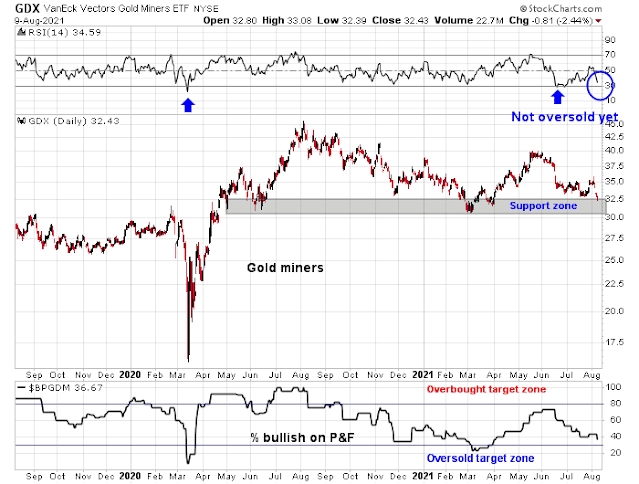 Mark Hulbert came to a similar conclusion, based on his interpretation of the Hulbert Gold Newsletter Sentiment Index (HGNSI):

The most sustainable rallies in the past have come when the average gold timer was not only extremely bearish, but stubbornly so. This is what happened in February and March of this year, as the chart illustrates: The HGNSI remained in the zone of extreme bearishness for over a month. Gold’s subsequent rally was impressive, with bullion rising over 13% and gold mining shares rising more than 22% (as measured by the VanEck Vectors Gold Miners ETF GDX.
In the rally that began in late June/early July, in contrast, neither bullion nor gold mining shares rose more than about 4%.
How long will it take until a strong contrarian buy signal? Contrarians typically don’t even attempt an answer, letting the markets tell their own story in real time. If the gold timers in coming days do finally throw in the towel, and then remain bearish in the wake of any initial show of gold strength, then a contrarian buy signal could come sooner rather than later. 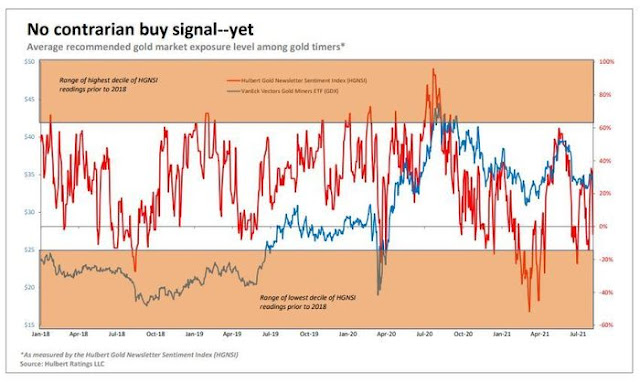 My inner investor was stopped out of his GDX position on Friday. I did not send out a trade alert as GDX is in my investment account on Friday and my standard practice is to only send alerts for trading account activity. I am waiting for more signs of panic before re-entering a long gold position.