What are the risks to this market? – Humble Student of the Markets

Mid-week market update: I have been relatively constructive on the stock market in recent weeks, but I am going to do something different this time. Aside from the obvious negative RSI divergences to the rising S&P 500, what are the downside risks to this bull? 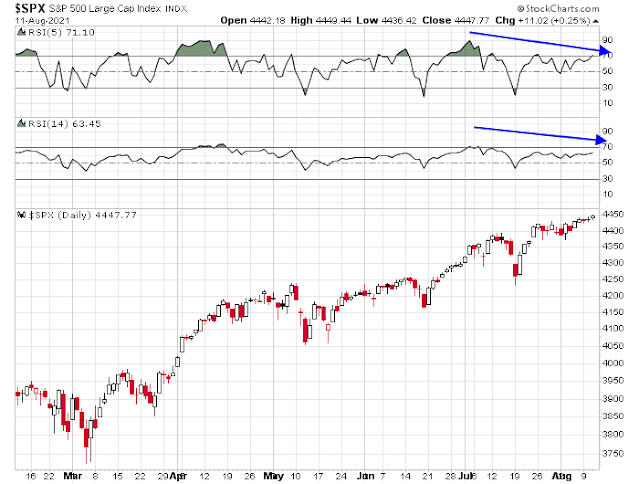 There are many to consider.

An analysis of market internals reveals a number of cautionary signals. None of them can be classified as sell signals by themselves and each of the negative divergences could resolve themselves in benign manners. In aggregate, however, they do form a picture that all is not well with the bull case.
One of the technical warnings comes from the action of the Dow and the Transports. While the Dow has been making fresh all-time highs, the DJ Transportation Average has been weak, though the decline was arrested at a key Fibonacci retracement level. While this kind of market action does not constitute a Dow Theory sell signal, it is nevertheless a cautionary flag to keep an eye on. 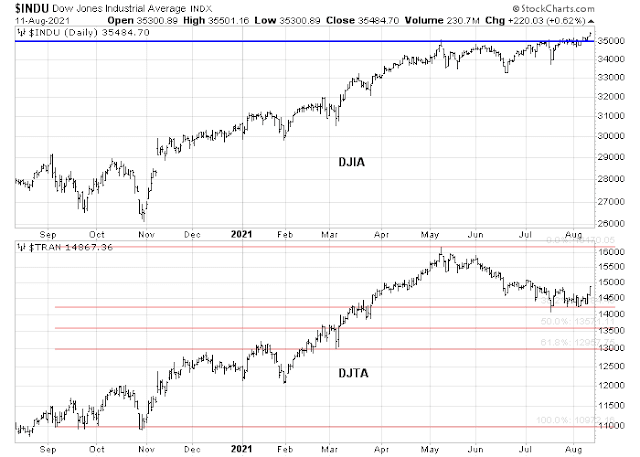 There has also been a persistent negative divergence between the S&P 500 and the relative performance of high beta to low volatility stocks. That said, my other equity risk appetite indicator, the equal-weighted ratio of consumer discretionary to staples, is tracking the upward trajectory of the S&P 500.

Credit market risk appetite is also giving a nagging feeling of risk appetite deterioration. Even as the S&P 500 grinds its way to new highs, credit spreads are widening. The relative price performance of junk bonds to their duration-equivalent Treasuries is deteriorating.

From an economic perspective, there are signs that the Delta variant is having an effect on economic growth. The most vulnerable global region to the Delta variant is Asia, where most countries have very low vaccination rates. As a consequence, Asian PMIs are all tanking, indicating a manufacturing slowdown. Will the rest of the world suffer an economic contagion effect? 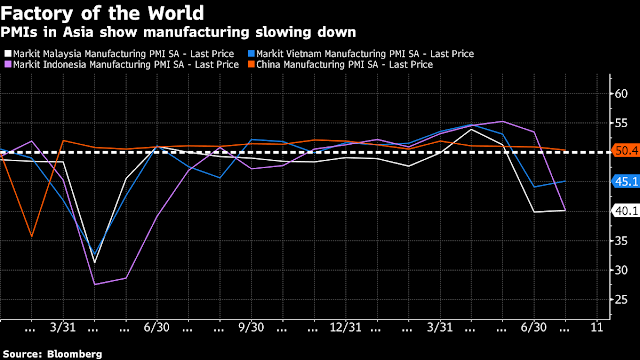 In the US, JPMorgan Chase is warning about a spending deceleration in its latest update of card services: “Retail spending outcomes have fallen short of our .. model in recent months. Our US card data reinforces this note of caution, showing a loss of momentum for airline spending and leveling off for restaurant spending this quarter.” 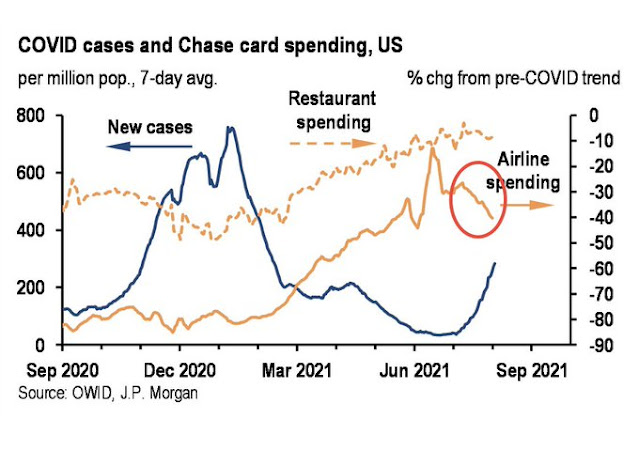 Will Powell be reappointed?

Another wildcard is the appointment of the Fed chair. Jerome Powell’s term ends in January. The WSJ reported that a fight is brewing in Washington between the Biden White House and the progressive wing of the Democratic party.

Members of President Biden’s economic team generally support nominating Federal Reserve Chairman Jerome Powell to a second term, but growing resistance from prominent Democrats including Sen. Elizabeth Warren (D., Mass.) could lead to his replacement, according to people familiar with the matter.
Mr. Powell, who was appointed to his first term by former Republican President Donald Trump, has received high marks from some Democrats for steering the central bank toward a paradigm shift that has placed greater attention on reducing unemployment. That coincided last year with a forceful response to the coronavirus pandemic.
But some progressives are unhappy with his bent toward easing financial regulations that were put in place after the 2008 crisis and think the central bank should have someone more in sync with Democratic politics in charge.
If Mr. Powell isn’t given a new four-year term next February, when his current term expires, the leading contender for the job is Fed governor Lael Brainard, an economist appointed to the board in 2014 by former President Barack Obama.

Frankly, I don’t understand the dispute. Lael Brainard is the obvious second choice if Powell isn’t reappointed. Her monetary policy views are very similar to Powell’s and the Fed wouldn’t change substantially under Brainard.
If the disagreement is over banking supervision, the solution is to appoint a vice chair with strong views instead of fighting over who is the Fed chair. To be sure, Brainard is a Democrat and Powell is a Republican but that shouldn’t make a big difference in monetary policy. Longer term, a Brainard appointment would be a signal that the Fed is being politicized and a switch could unsettle markets. It opens the door to more overt political manipulation of the Fed in the future, in the same way that Trump nominated Judy Shelton as a Fed governor with the expectation that she could have become the Fed chair had he won a second term.
In conclusion, the S&P 500 faces a number of important obstacles as it advances to fresh highs. While I am not implying that the market is about to crash, investors need to consider the risks to this market.
In a future edition, I will outline the upside potential of this market.

15 thoughts on “What are the risks to this market?”