High expectations for earnings season – Humble Student of the Markets 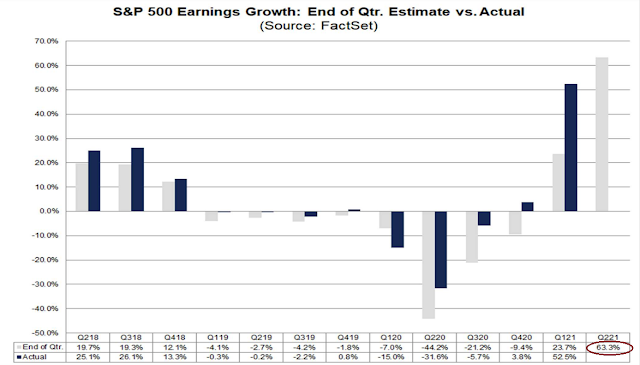 While that growth estimate appears to be a high bar, investors have to keep in mind the low base effect. As well, the historical record shows that actual growth has tended to exceed estimates. In other words, the bears shouldn’t count on earnings disappointment as a catalyst for a price downdraft.

FactSet further reported that the bottom-up derived S&P 500 target is 4803.62, which is 11.2% above last Thursday’s closing level (the publication date of the report). 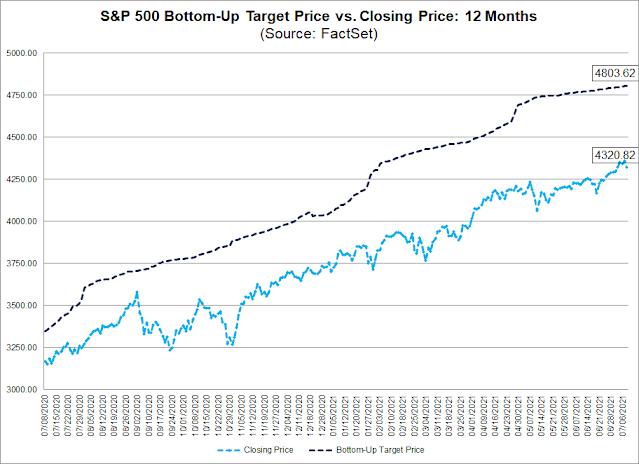 In light of recent results, it’s hard to be too bearish on the stock market.

This does not mean, however, that the stock market can rise in a straight line. Sentiment models have been flashing warning signs for some time, but sentiment can be an inexact timing signal when readings are overly giddy. As an example, Callum Thomas’ Euphoriameter is at a bullish extreme. The historical record shows that the market has continued to either advance or trade sideways on the occasions when it has been this high. 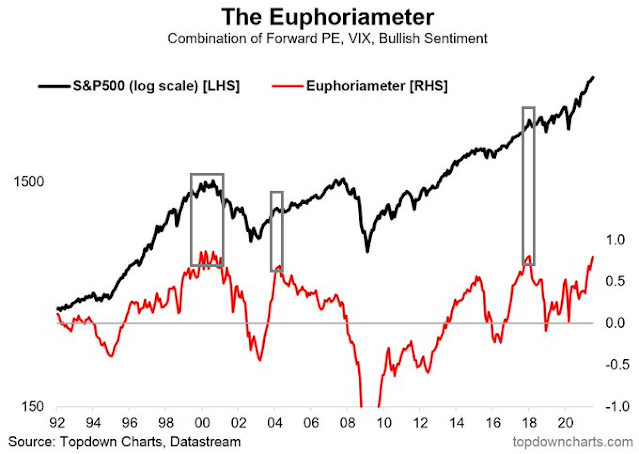 NDR’s Crowd Sentiment is similarly stretched. The S&P 500 has exhibited tepid returns when readings have been this high. However, the historical annualized gain of -0.5% is hardly a strong reason to short the market. 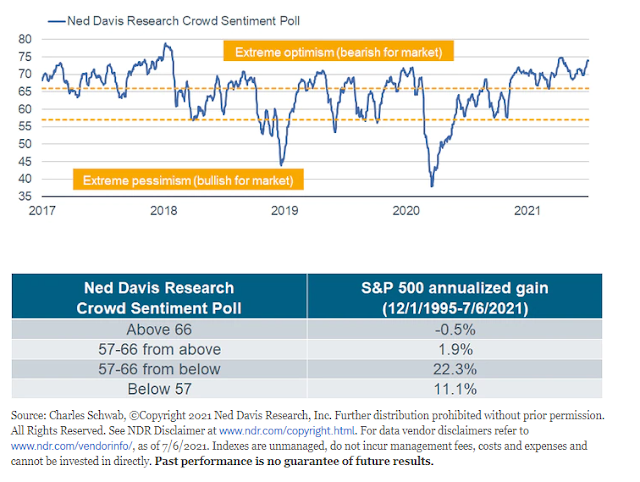 Willie Delwiche observed that only a quarter of global markets are above their 50 dma and the S&P 500 has historically struggled under such conditions. 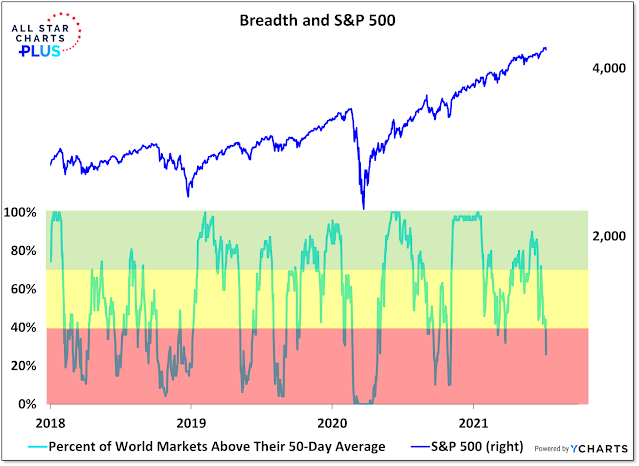 This time may be different. As I have pointed out endlessly, the market is undergoing an internal rotation between growth and value. US equities have taken on growth characteristics owing to the large weighting in large-cap technology stocks in the S&P 500, while non-US stocks have taken on value characteristics by default. Value is on the ropes, but the value/growth ratio is exhibiting a positive RSI divergence and a nascent breadth turnaround. 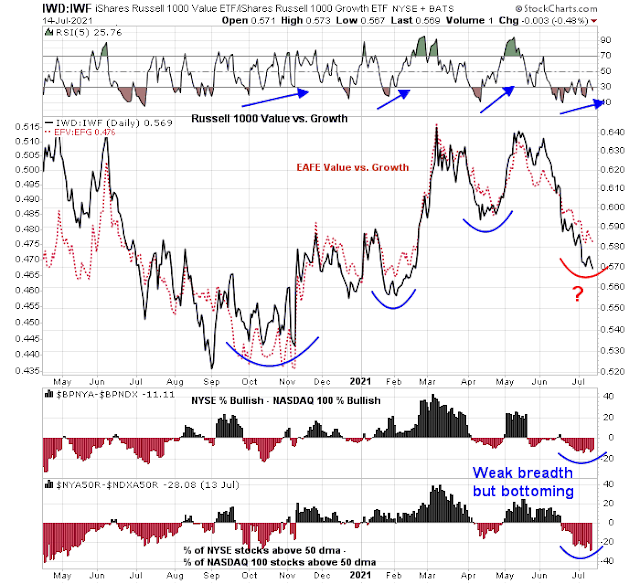 Where does that leave us? I am not overly concerned about a significant downdraft. The relative performance of defensive sectors are not showing any leadership qualities with the exception of real estate. 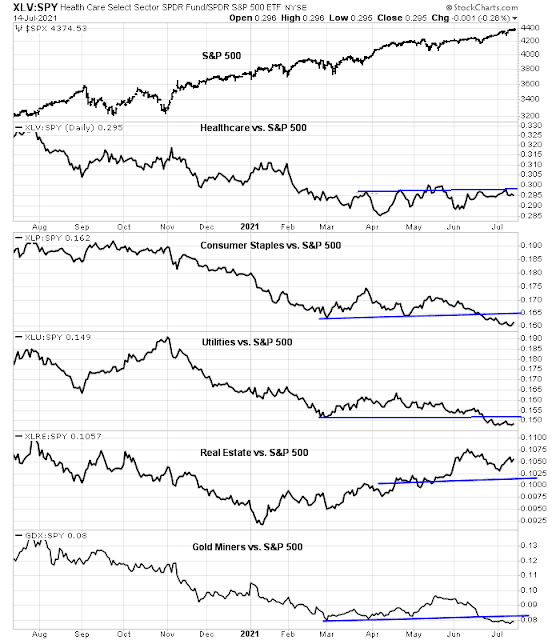 My base case calls for a period of sideways consolidation, but I am watching small-cap stocks as a barometer that the market could stage a surprise rally. The Russell 2000 has been trading sideways in a range-bound pattern since February, but it is testing an important Fibonacci relative support level. 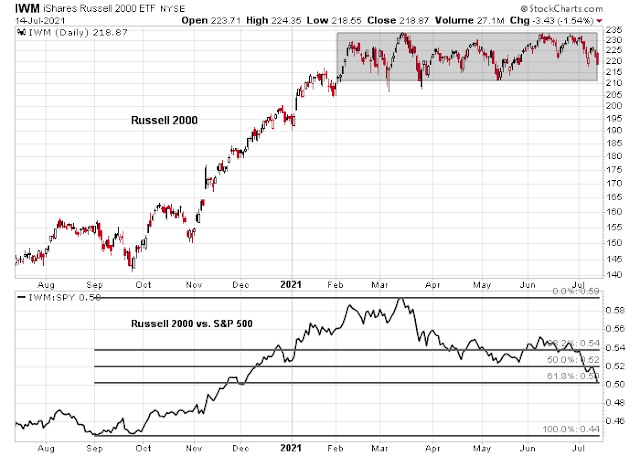 Interestingly, the S&P 600, the “other” small-cap index, is behaving much better than the widely watched Russell 2000. S&P has much stricter profitability inclusion criteria and it therefore has a higher quality bias. The S&P 600 is in a minor uptrend and it is only testing the 50% retracement level relative to the S&P 500, whereas the Russell 2000 to S&P 500 ratio is testing its 61.8% retracement level. Ironically, the widespread evidence of negative breadth has translated into near bullish conditions. Both the NYSE and NASDAQ McClellan Oscillators are nearing oversold levels which have been signals of tradable bottoms. 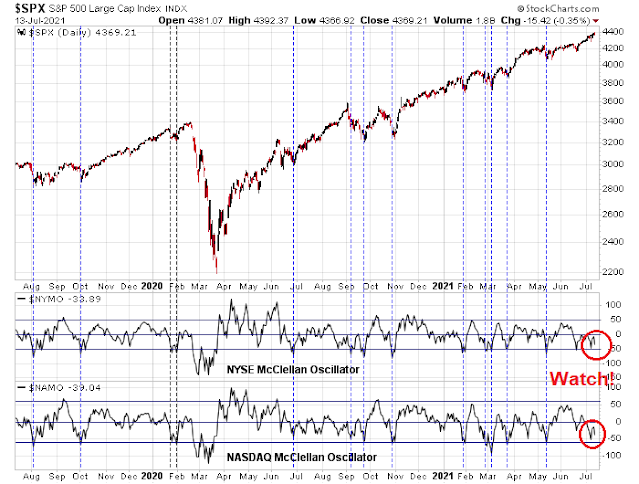 Stay tuned for further developments, and don’t get too bearish.