Here comes the retest – Humble Student of the Markets

Mid-week market update: I wrote on the weekend (see Where’s the fear?) that the relief rally that began last Thursday was unconvincing and my base case scenario called for a retest of the lows. The retest appears to be underway. 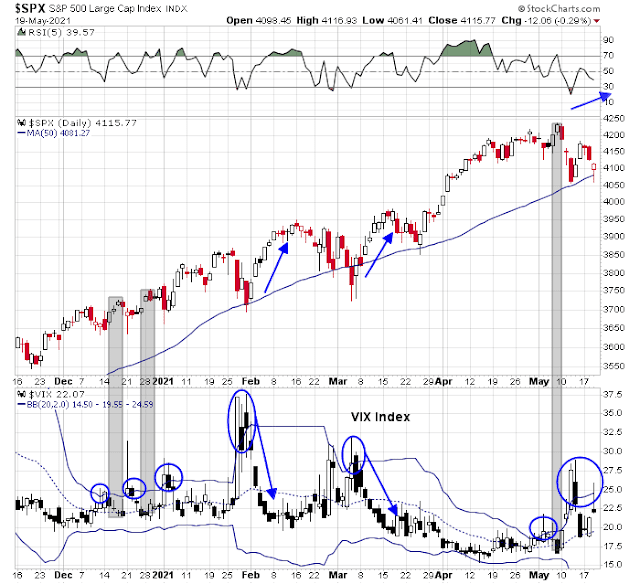 Spikes of the VIX Index above its upper Bollinger Band (BB) were signals of an oversold market. Such episodes were resolved in two ways. Strong market rallies were characterized by price momentum and definitive violations of the VIX 20 dma (blue arrows). On the other hand, if the VIX was unable to fall below its 20 dma, the S&P 500 advance stalled and weakened again (grey bars). The current situation appears to fall into the latter category.
Nevertheless, I believe that any pullback should be shallow and the S&P 500 is likely to successfully test its 50 dma. It is already exhibiting a positive RSI divergence, and other market internals are tilted in a bullish direction.

Consider, for example, small-cap stocks, as represented by the Russell 2000. The chart of the Russell 2000 has been stuck in a trading range. Moreover, it is showing ambiguous formations of both a possible bearish head and shoulders (black), which is bearish and inverse head and shoulders (red) formations. Similarly, the 10-year Treasury yield has also been stuck in a tight range. 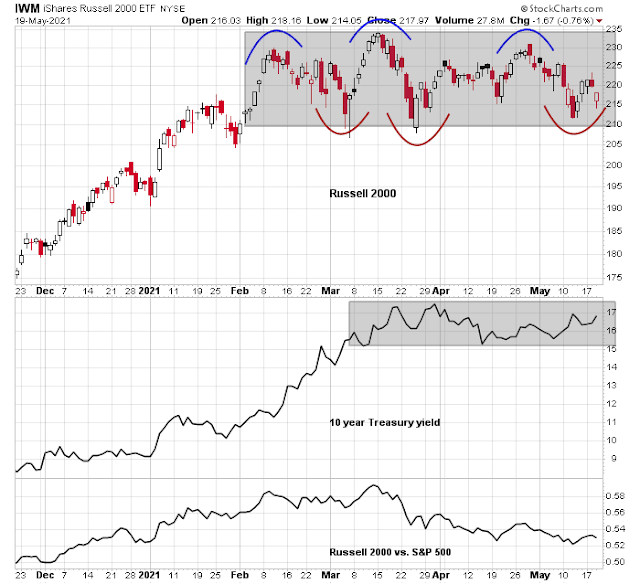 The technical pattern of growth stocks, which have suffered the brunt of the selling, is also constructive. The NASDAQ 100 is also exhibiting a positive RSI divergence. The high-octane ARKK ETF recently bounced off a relative support level and it is beginning to outperform again. 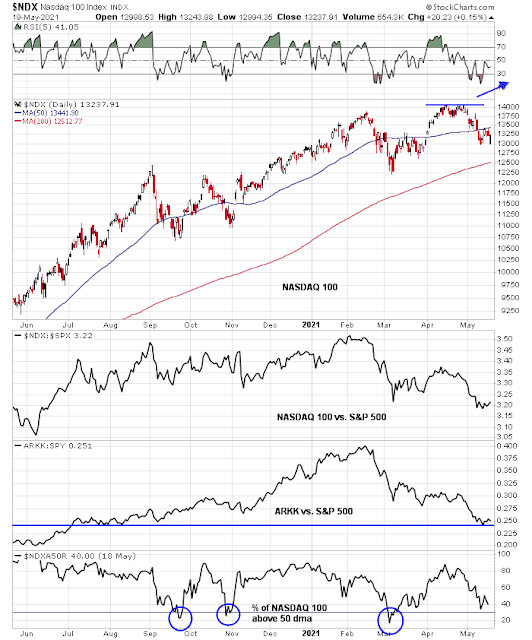 If and when the market recovers, the odds favor a growth stock revival over the next 1-2 weeks.

Tactically, there may be a little more weakness ahead before this pullback is over. The Russell 1000 Value Index violated a rising trend line, which is a sign of technical damage that needs to be repaired by way of a period of sideways consolidation and basing. By contrast, the Russell 1000 Growth Index is now testing a key support level. 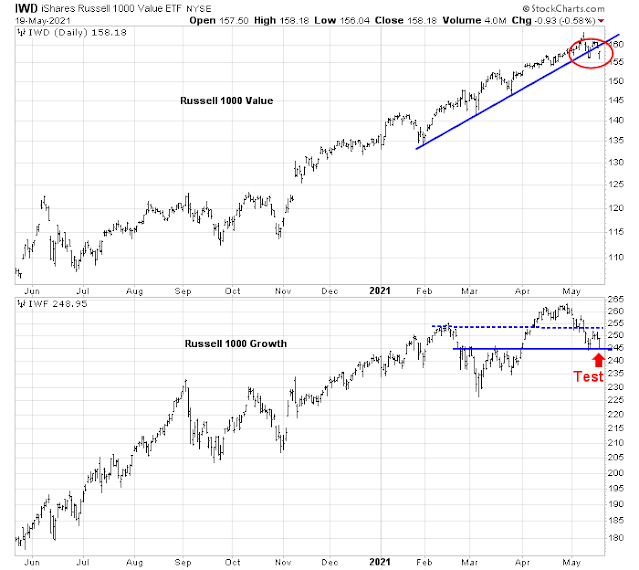 Sentiment is deteriorating, but panic hasn’t set in yet. The Fear & Greed Index is falling, but readings haven’t reached the sub-30 target zone yet. 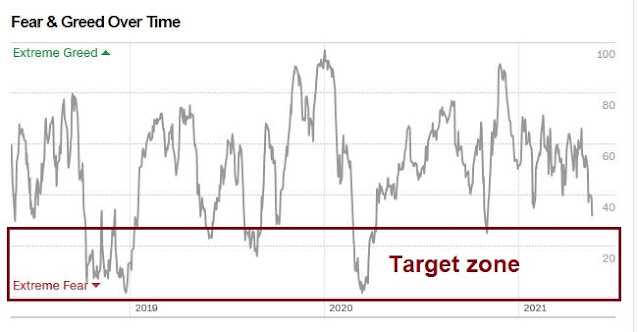 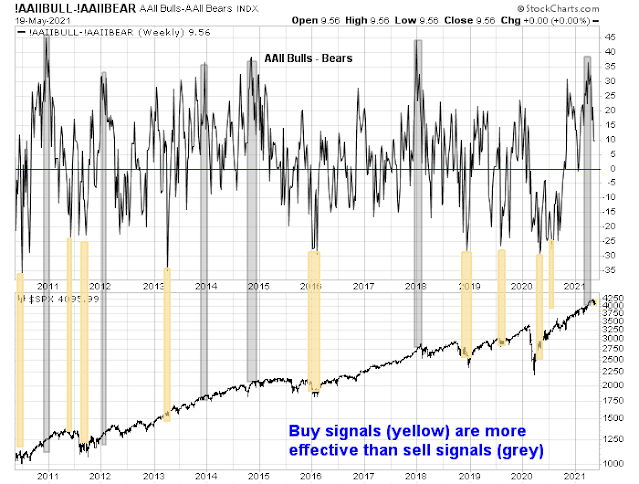 The same could be said of Investors Intelligence. The number of bulls edged down, but bearish sentiment hasn’t spiked. 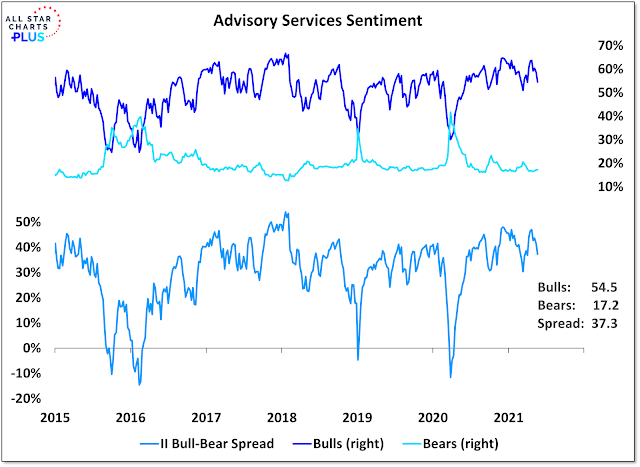 A similar level of complacency can be seen in the options market. The term structure of the VIX hasn’t inverted, which indicates fear. At a minimum, I would like to see the short-term 9-day VIX rise above the 1-month VIX. 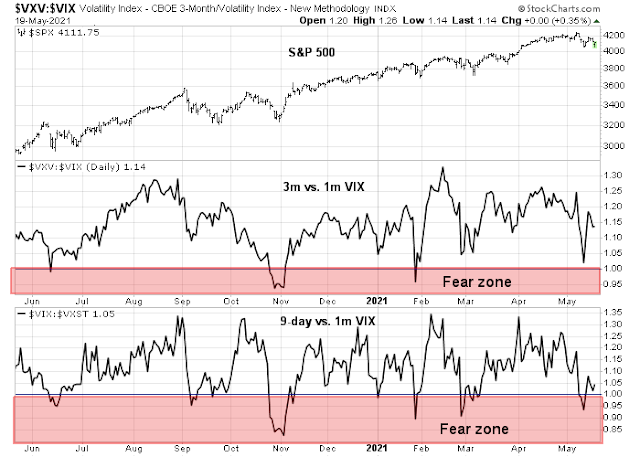 I conclude from this analysis that the bottom is near, but not yet. The odds favor one more flush downwards in the next few days before a durable bottom is made. However, I am open to the possibility that today’s approach of the 50 dma represents a successful test of that support level. Watch for bearish follow-through in the next couple of days. If the market were to decisvely rally from here, then today was “the bottom”.

38 thoughts on “Here comes the retest”