The inflation red herring – Humble Student of the Markets

Rising inflation fears are all over the headlines. From a top-down perspective, inflation pressures are clearly rising. 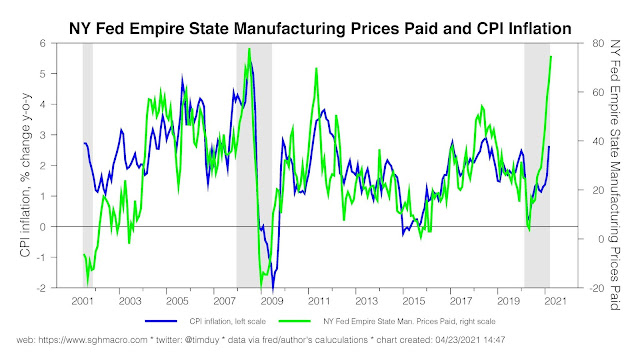 “…the inflationary pressures, particularly surrounding some of our key commodities, looks like it is going to be more of a headwind in ’22” – Coca-Cola (KO) CFO John Murphy
“…we’re watching and seeing SG&A inflation in different parts of the world and in different parts of the business, ranging from wage inflation in selective geographies. You’ve got global logistics inflation. You’ve got commodity inflation.” – Genuine Parts (GPC) President William Stengel
“In the first quarter, global semiconductors and resin shortages amplified existing supply constraints, and thus impacted our product availability. Further, we are faced with rapidly rising inflationary pressures, primarily in steel and resins. To address these issues, we swift the responses with the necessary actions to protect margins and product availability. We announced significant cost based price increase in various countries across the globe ranging from 5% to 12%” – Whirlpool (WHR) CEO Marc Bitzer

BoA also documented a surge in the mentions of “inflation” on their earnings calls. 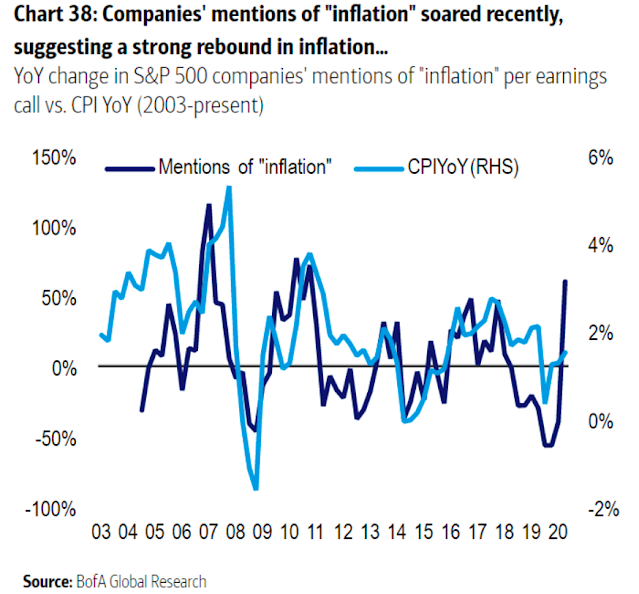 Instead, I would argue that the inflation threat to equity prices is a red herring. Tax policy poses a stronger threat.

The inflationary menace for equities has two components. The Fed could raise interest rates in reaction to rising inflation, which makes fixed-income securities more competitive to stocks. If the Fed does not react, it risks setting off an inflationary spiral if it loses control of inflation expectations.

Let’s address each of those issues. The Fed will not raise rates until it begins to taper its QE purchases. Fed watcher Tim Duy believes that the Fed is prepared to wait out the “transitory” nature of reopening inflationary first and react later.

My sense is that the Fed intends to wait until we push through the initial rebound of the economy before shifting policy. In the midst of the strongest part of the cycle there is a risk of complacency about the durability and pace of the recovery.

Duy believes that the Fed will not make any public statements about tapering until later this year. 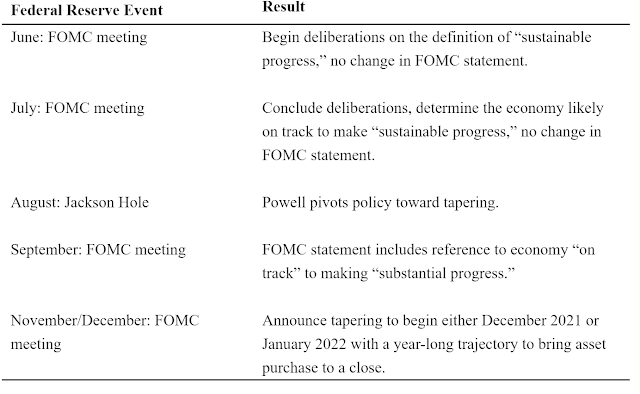 Marketwatch reported that Joe Lavorgna, the former chief economist for the Trump White House’s National Economic Council, had an even more dovish take on Fed policy. He doesn’t expect the Fed to taper before 2023.

Lavorgna isn’t fearful of goods and services inflation, and, as a result, says the Fed won’t begin to taper its bond purchases before 2023 — and won’t lift interest rates before the next presidential election. The New York Federal Reserve’s survey of primary dealers, in March, found Wall Street expecting that the taper would begin in the first quarter of 2022, with the first hike in the third quarter of 2023. “If you’re going into 2022, and growth is a lot slower, the delta is negative, and inflation isn’t really picking up, it’s going to be very hard for the Fed to taper,” the Wall Street veteran says.

In the meantime, a flood of liquidity is hitting the economy. The March personal income report revealed that stimulus payments made up 18.5% of personal income. 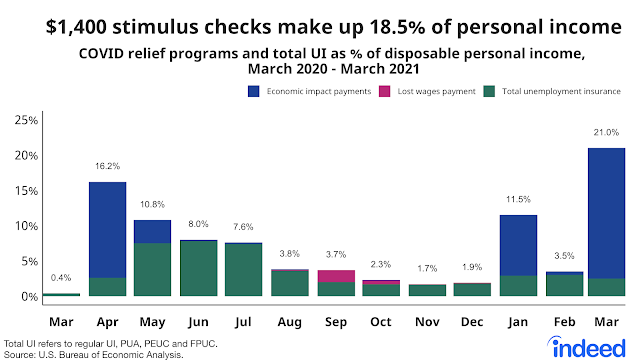 Treasury cash balances are falling quickly and fiscal stimulus will continue until Q3. Equity investors shouldn’t be so worried about inflation. 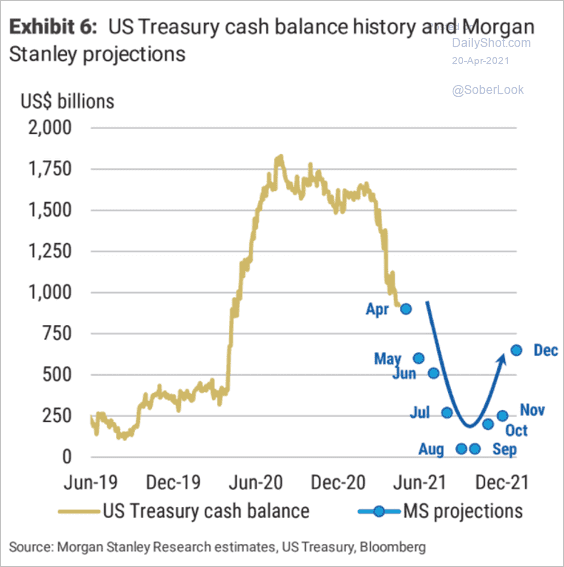 The timing of the flood of Treasury cash also makes the point that much of the fiscal stimulus is one-time and transitory in nature. Any surge in demand is likely to top out later this year and so too the associated inflationary pressures.
Already, the Economic Surprise Index, which measures whether economic releases are beating or missing expectations, has been slowly decelerating. As growth expectations decline, expect 10-year yields to follow. This leaves the economy in a sweet spot of strong non-inflationary growth, which is equity bullish. 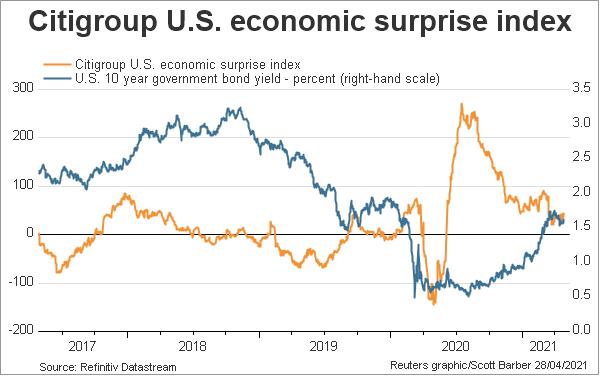 What about long-term inflation? Pandemic-related inflationary surges have historically been benign. A study of history by Kevin Daly and Rositsa D. Chankova of Goldman Sachs Global Macro Research published at VoxEU and CEPR found that inflation rises much more during wars than pandemics [emphasis added]:

Every war and pandemic is different, and we should be cautious of drawing lessons from events that occurred in the long-distant past and in very different circumstances. One feature of the current pandemic that is clearly distinctive to past episodes is the size of the government response. Equally, however, one can argue that an unusually large government response was necessitated by an unusually large collapse in private sector demand.

What is clear is that history provides no evidence that higher inflation or higher bond yields are a natural consequence of major pandemics. 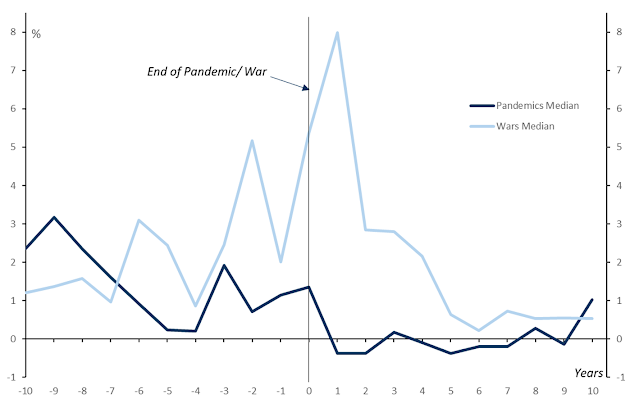 Even if you are worried about runaway inflation, a historical study of inflation expectations compared to S&P 500 returns finds that the environment is benign. Expectations are in the 2-3% range. Equity returns don’t turn negative until inflation rises to 5-6%, and the Fed can be depended to tap on the brakes well before the economy overheats that much. 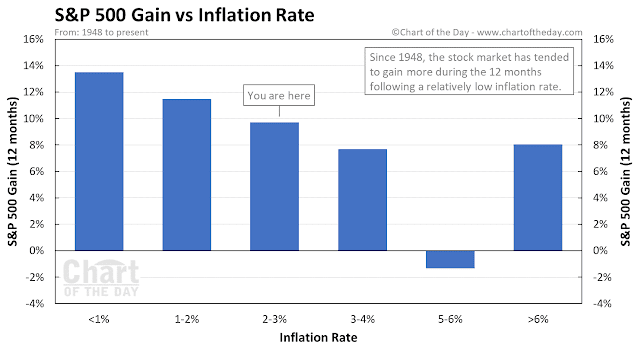 In short, inflation fears are overblown. This is not the time to worry about transitory rising inflation pressures.

Instead of inflation, the real threat to equity prices is rising taxes. No, equity investors shouldn’t be overly worried about Biden’s proposal to raise taxes on high-income individuals, an end of the carried interest provision, or higher capital gains taxes over $1 million. In fact, there was a flood of analysis showing that capital gains tax rates has little effect on the stock market. 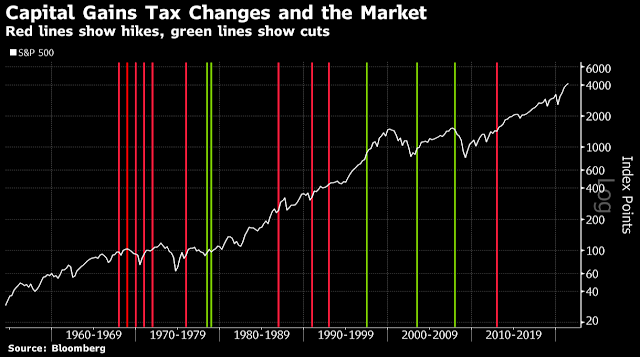 That’s because equity ownership has increasingly shifted away from taxable individuals to foreigners and deferred-tax accounts. 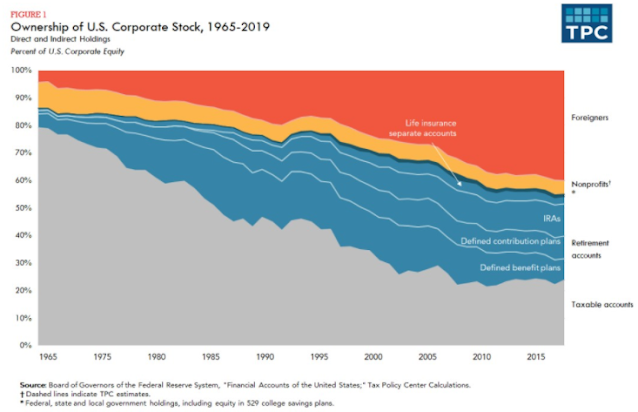 I believe the most important threat to equity prices is Biden’s corporate tax proposals. David Fickling hit the nail on the head when he wrote in a Bloomberg Opinion article that “Yellen’s Global Tax Plan Is on the Level of Trump’s Trade War with China”.

If you expected the administration of President Joe Biden to be a return to normalcy on trade issues after the drama of Trump-era tariff battles and tweet diplomacy, Treasury Secretary Janet Yellen has other ideas.

That’s because her plans announced Monday to introduce a global minimum corporate tax rate represent quite as much of a shock to the international economic order as Trump’s decision to wage trade war on China.

The two phenomena are connected as fundamental aspects of the modern global economy. Corporations have cut operating expenses at the top of their income statements by sending manufacturing offshore to China and other emerging economies where labor costs are lower. At the bottom of their income statements they’ve done the same with tax expenses, by offshoring their profits to low-tax jurisdictions such as Bermuda, the British Virgin Islands, the Cayman Islands, Ireland, the Netherlands, Luxembourg, Singapore, and Switzerland.

In a separate Bloomberg report, Germany and France have come out in support of Yellen’s corporate minimum tax proposal. (They’re looking at you, Ireland.)

A corporate tax increase is justified by the Biden administration on the grounds that the Trump tax cuts did not spur investment activity. Corporate CapEx has been falling for years and you have to squint to on the chart to see when the Trump tax cuts occurred. 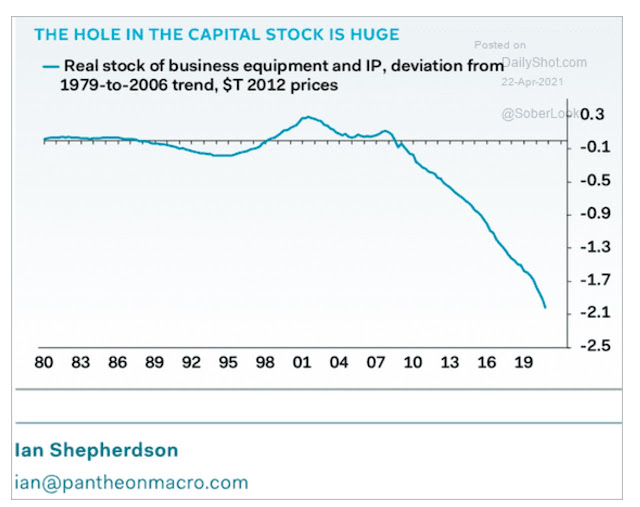 While there will be some inevitable bargaining over the statutory tax rate, which is expected to rise from 21% to 25% instead of the proposed 28%, the real story is how effective tax rates will change. 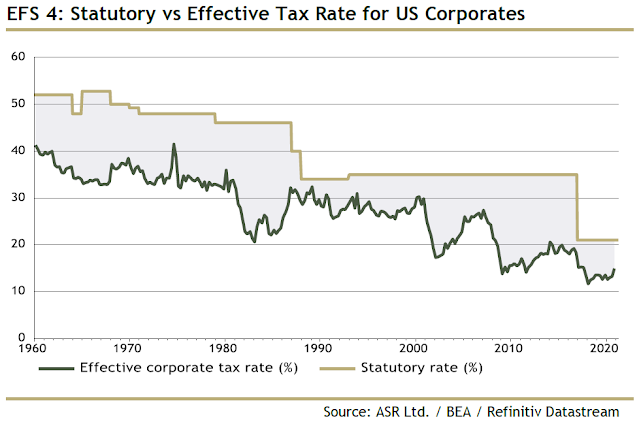 Notwithstanding the proposal of a corporate minimum tax, the more important component of Biden’s proposal is an increase in GILTI tax from 10.5% to 21%. For the uninitiated, GILTI stands for Global Intangible Low-Taxed Income. A GILTI tax is intended to prevent companies from shifting their IP profits to low-tax jurisdictions. The relative losers are in communication services, technology, and drugs. The relative winners are in the value and cyclically sensitive materials, energy, and industrial sectors. 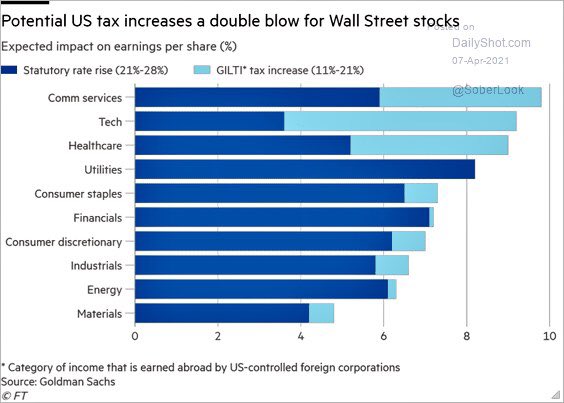 A separate analysis by Absolute Strategy Research found that the Trump tax cuts favored growth over value stocks. The tax rates between the most extreme quintiles of value were roughly the same until Trump’s Tax Cuts and Jobs Act. After the implementation of the tax cuts, the cheapest value stocks (blue line) experienced a much smaller tax cut than the most expensive (gold line). 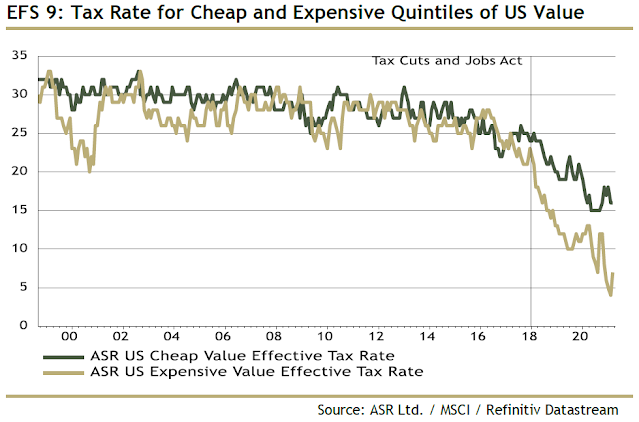 To conclude, here are my main takeaways from this analysis:

13 thoughts on “The inflation red herring”