Has technical analysis stopped working? – Humble Student of the Markets

If you bailed because of Bollinger Bands, ran away from relative strength or took direction from the directional market indicator in 2021, you paid for it.
It’s testament to the straight-up trajectory of stocks that virtually all signals that told investors to do anything but buy have done them a disservice this year. In fact, when applied to the S&P 500, 15 of 22 chart-based indicators tracked by Bloomberg have actually lost money, back-testing data show. And all are doing worse than a simple buy-and-hold strategy, which is up 11%.
Of course, few investors employ technical studies in isolation, and even when they do, they rarely rely on a single charting technique to inform decisions. But if anything, the exercise is a reminder of the futility of calling a market top in a year when the journey has basically been a one-way trip.
“What we’ve seen this year is a very strong up market that didn’t get many pullbacks,” said Larry Williams, 78, creator of the Williams %R indicator that’s designed to capture a shift in a security’s momentum. A long-short strategy based on the technique is down 7.8% since the end of December.

Sell signals have failed. Much of this can be explained. Some, like this sentiment signal from BoA’s private client holdings, indicate a record crowded long in equities which is contrarian bearish. However, how much can investors allocate to fixed-income instruments in an era of low and rising rates? Stocks are the only game in town, even for income investors. 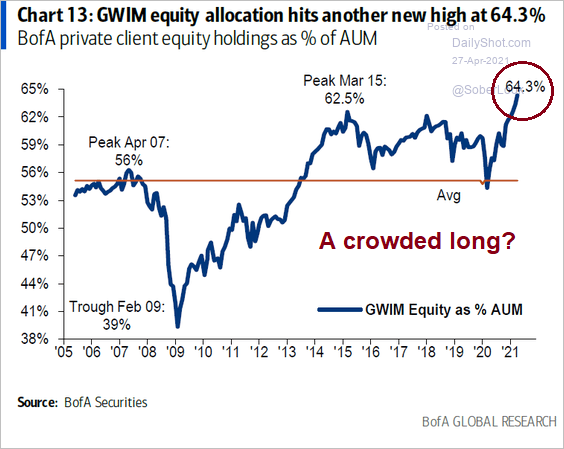 The straightforward view is the strength of momentum has overwhelmed all other technical signals.

Another way of explaining momentum is “good overbought” reading. As good technical analysts know, no reversals are guaranteed. Overbought conditions can get more overbought and oversold.  conditions can get oversold.
We are reaching conditions when momentum is starting to wane and sell signals may be about to become more effective. The percentage of S&P 500 stocks over their 200-day moving average (dma) exceeded 90% in November. This was a “good overbought” condition indicating a strong and sustained advance. In the past, the rallies did not pause until the 14-week RSI reached an overbought reading of 70 or more, which was achieved in late March. That was the first warning. 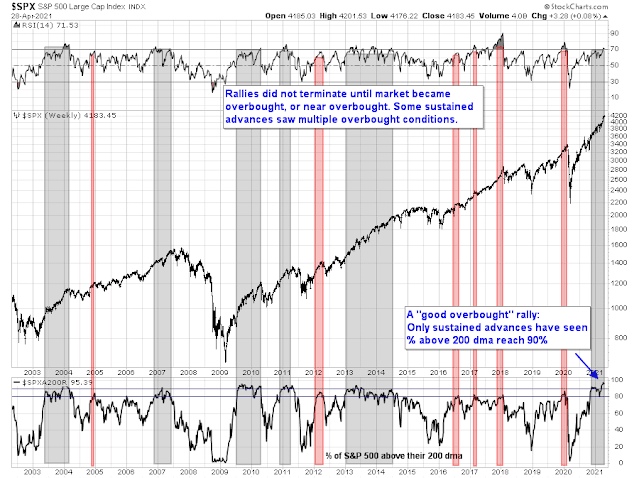 The second warning occurred when the S&P 500 overran its rising trend line on the weekly chart and recycled, which were indications of blow-off tops. 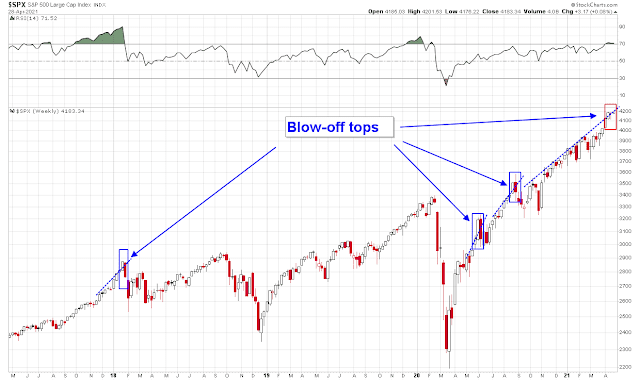 The daily chart also showed an ominous negative divergence. Even as the S&P 500 made daily marginal all-time highs, both the 5 and 14-day RSI flashed negative divergences. While negative RSI divergences can persist for days before prices react, this was also another warning that the rally is its last legs. 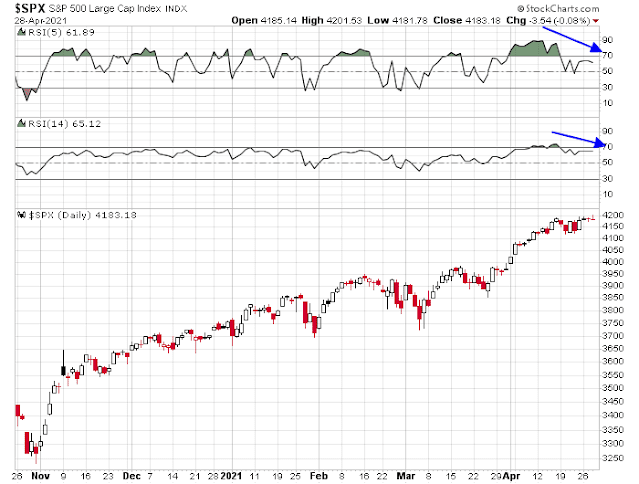 It’s always difficult to make short-term market calls on FOMC day. Daily uncertainty is especially problematic when the market is in the heart of Q1 earnings season. On Monday, Netflix missed subscriber growth expectations, and the stock fell after the report. On Tuesday, both Microsoft and Alphabet beat Street expectations. Microsoft fell while Alphabet rose. Even AMD, which reported and came out with extremely strong guidance, saw its stock price retreat. Today (Wednesday), Apple and Facebook beat expectations and rose in the after hours.
You can tell a lot about the character of a market by the way it reacts to the news. Even though results have generally been positive, the market reaction has been mixed though not disastrous.