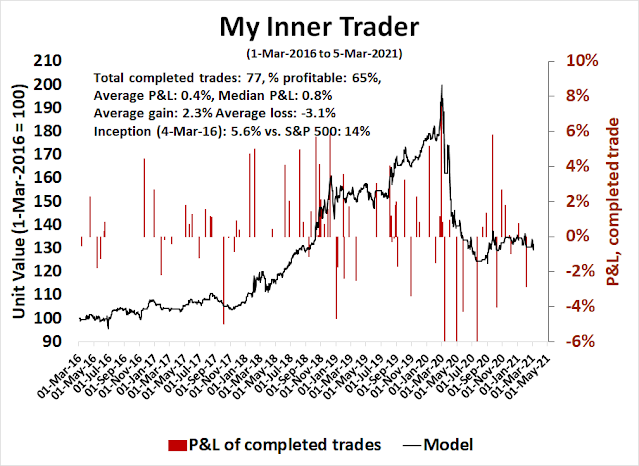 I have been warning for the past few weeks that sentiment was overly frothy and due for a reset. The reset finally began in the last two weeks. The weekly S&P 500 chart shows the index fell, but held a rising trend line support after the 5-week RSI flashed a negative divergence for most of 2021. The high-flying momentum stocks, as represented by the NASDAQ 100 (NDX), were not as fortunate. NDX violated its rising trend line indicating significant technical damage has been done. 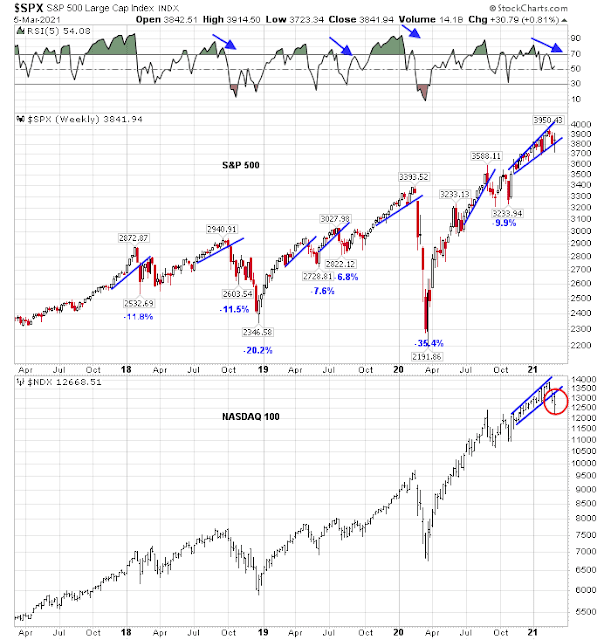 At its deepest, the S&P 500 was -5.7% off its all-time highs. The carnage in the high-octane NASDAQ 100 was even worse. That index was off -11.3% on a peak-to-trough basis indicating a definitive loss of growth stock leadership. As Big Tech comprise nearly half of S&P 500 weight, this has important consideration for the overall market direction.
However, the short-term market action indicates an oversold market poised for a relief rally.

The momentum and growth stock massacre

The carnage can be seen mainly in the price momentum factor, which buys recent price winners. There are four momentum ETFs (MTUM, JMOM, PDP, QMOM). No matter how momentum is measured, the relative performance of this factor has crashed in the past two weeks. 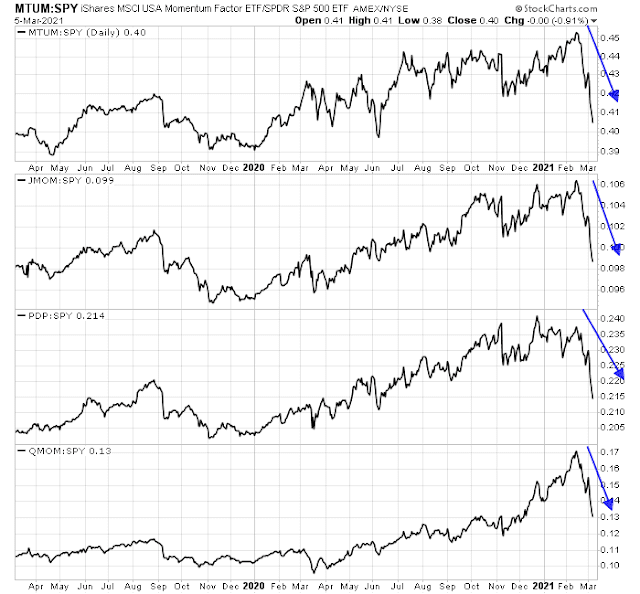 The same can be said of growth stocks. For several years, growth stocks have been the market leaders, but the growth and value relationship reached an inflection point at about the time of Vaccine Monday in November when Pfizer announced positive news on its vaccine by trading through a rising relative trend line. The growth to value ratio recently broke down by confirming the dominance of the value style last week. 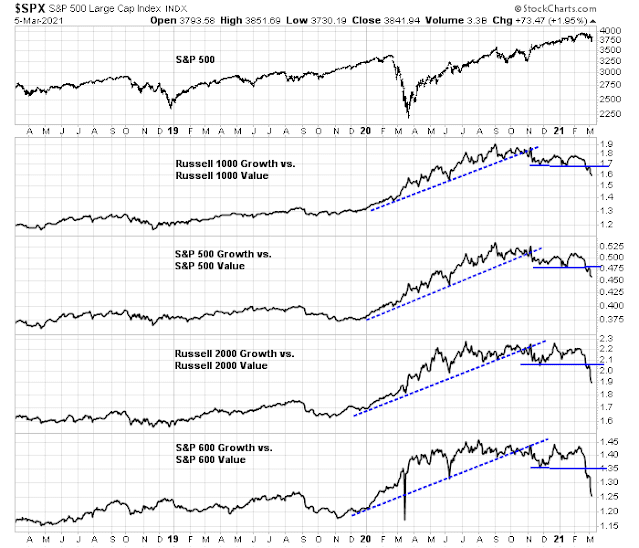 The growth-heavy NASDAQ 100 is rolling over. Its performance relative to the S&P 500 is nosediving, and so is the relative performance of the speculative growth ETF ARKK. However, NDX and ARKK are all trading at or near absolute and relative support. 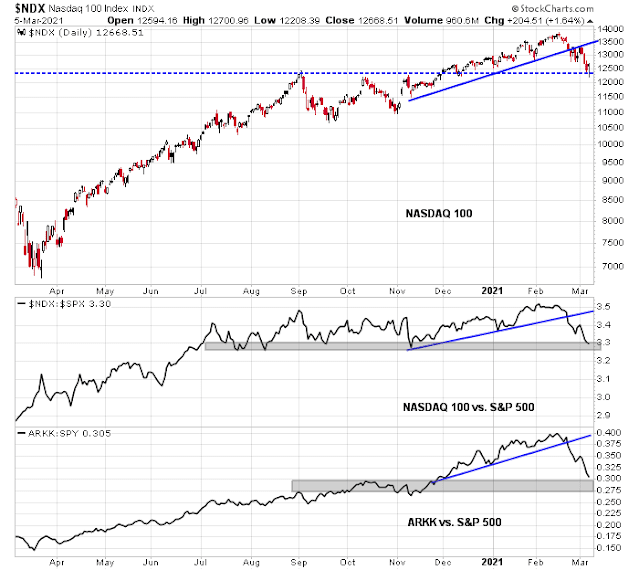 In the short-term, the market’s action is oversold and a relief rally may have begun on Friday. Let’s begin with the bond market, which sparked the latest round of market weakness. TLT, which represents the Treasury long bond, is flashing a positive 14-day RSI divergence on high volume, indicating positive momentum on capitulating volume. 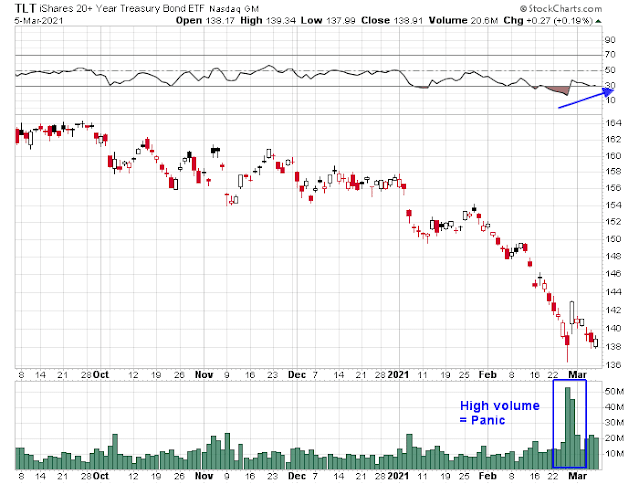 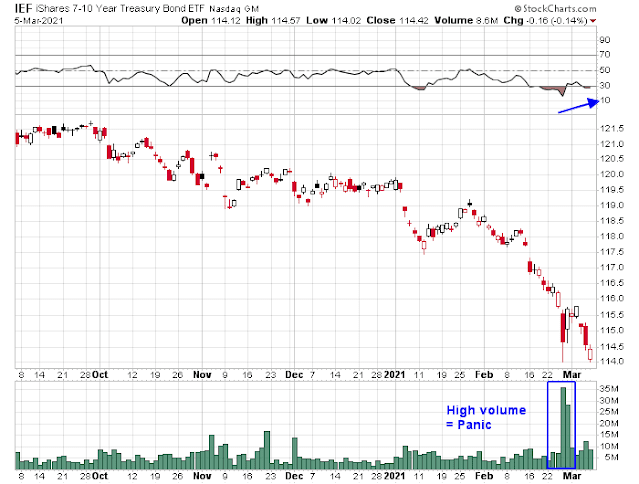 The NASDAQ 100, which bore the brunt of the selling, is also exhibiting a positive 5-day RSI divergence. As well, the NASDAQ McClellan Oscillator (NAMO) has reached a second oversold reading in the space of a week. The last time this happened, which was in January 2020, the index bottomed and took off to its ultimate peak in February when the news of the pandemic sideswiped all risk assets. In addition, market breadth such as the percentage of stocks with point and figure buy ratings have reached oversold levels. 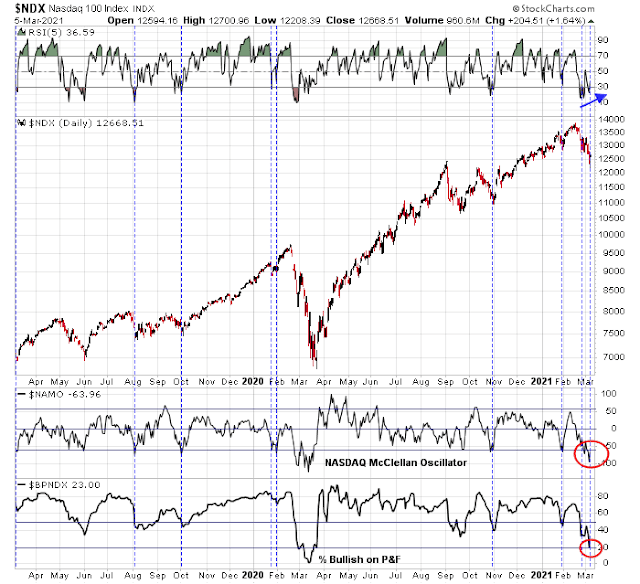 Based on the thesis that growth stocks have shifted to a secular period of underperformance, I analyzed the NAMO and percentage bullish indicators during the 2000-2001 Tech Wreck period when the dot-com bubble burst. Based on a study of that difficult period for growth stocks, I found the NASDAQ 100 always staged a short-term relief rally when NAMO became oversold. 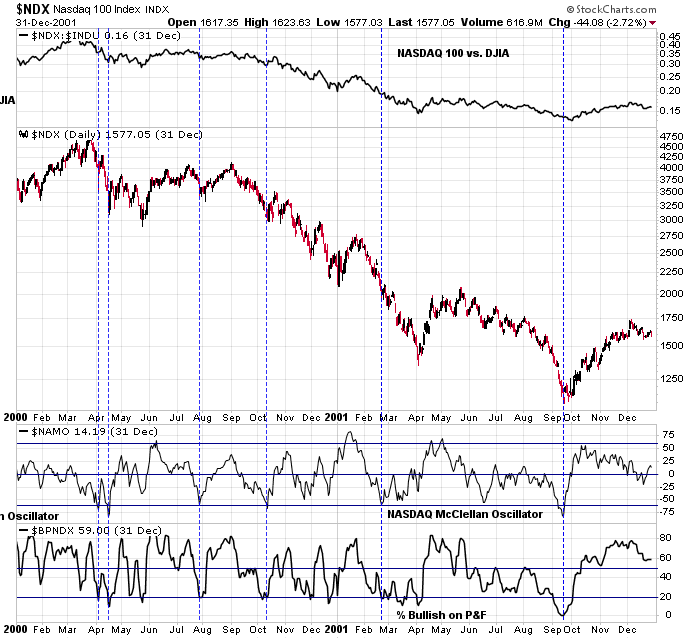 Sentiment: Not out of the wood

Before investors rush out to buy the dip on Monday, sentiment models have not sufficiently recycled to indicate a major bottom just yet.
The latest Investor Intelligence survey shows a pullback in bullish sentiment, but bearish sentiment has not spiked to levels normally seen at durable bottoms. 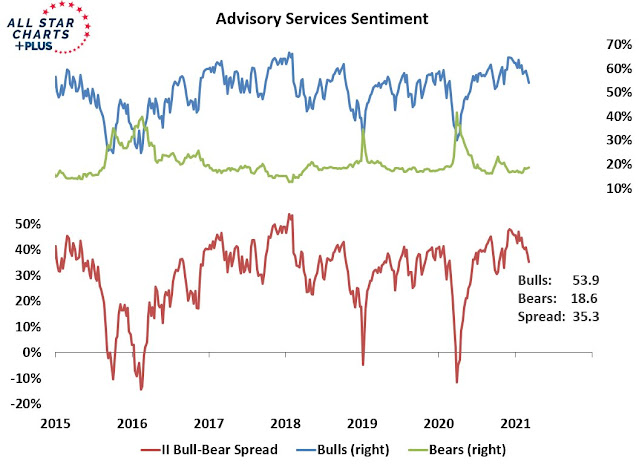 Similarly, the NAAIM Exposure Index, which tracks the sentiment of RIAs, has fallen to 65% from a recent high of 110%. Readings have not fallen below the 26-week lower Bollinger Band, which is the level when my sentiment model flashes a buy signal, though there are no guarantees that sentiment will necessarily reach those levels. 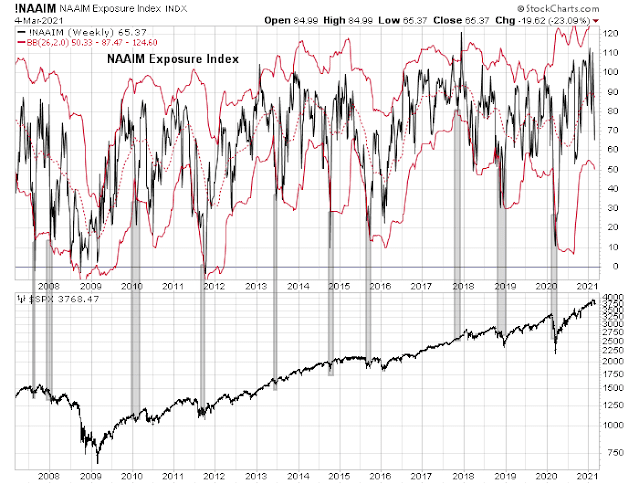 Mark Hulbert‘s newsletter sentiment models show that while equity sentiment is low, they are not in the extreme pessimism zone. However, gold and bonds are washed out and poised for rallies. 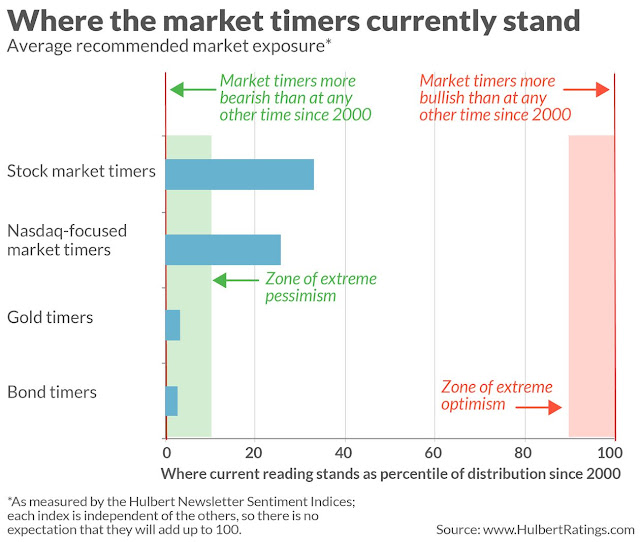 In summary, equity sentiment models can be best described as constructive. There isn’t enough panic just yet.

Buy the dip, and sell the rip

In conclusion, the downtrend for the market and growth stocks has been confirmed, but conditions are sufficiently oversold that a relief rally is imminent.
Ryan Detrick of LPL Financial offered the following template for the market. If the current bull market follows the pattern of the two strong bull markets that began in 1982 and 2009, it would begin to tire and consolidate about now.

However, market averages are deceptive. Investors should use rallies to raise cash from the sale of growth stocks rotating into value stocks on weakness. Proshares has a Rising Rates ETF (EQRR) that I would not recommend buying because of its minuscule assets and lack of liquidity. Nevertheless, its sector weights are tilted towards value and cyclical sectors and reflective of the new market leadership, and its relative performance is revealing of what investors should expect in the new market regime. 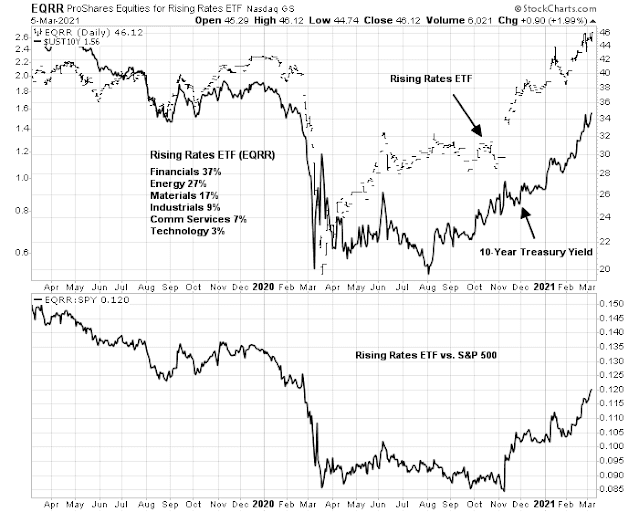