In his latest letter to Berkshire Hathaway shareholders, Warren Buffett reported that even Berkshire’s largest publicly listed holding is asset-light Apple, and Berkshire is a very asset-heavy company. Its two major holdings are railroad BNSF and electric utility BNE, which has a large capital project to upgrade the electrical transmission grid in the western US, due to be complete in 2030.

Recently, I learned a fact about our company that I had never suspected: Berkshire owns American-based property, plant and equipment – the sort of assets that make up the “business infrastructure” of our country – with a GAAP valuation exceeding the amount owned by any other U.S. company. Berkshire’s depreciated cost of these domestic “fixed assets” is $154 billion. Next in line on this list is AT&T, with property, plant and equipment of $127 billion.

However, he extolled the virtues of asset-light platform businesses:

Our leadership in fixed-asset ownership, I should add, does not, in itself, signal an investment triumph. The best results occur at companies that require minimal assets to conduct high-margin businesses – and offer goods or services that will expand their sales volume with only minor needs for additional capital. We, in fact, own a few of these exceptional businesses, but they are relatively small and, at best, grow slowly.

In the past decade, investors have bid up the price of technology stocks, which have been the main beneficiaries of the asset-light platform business model. On a relative basis, technology forward P/E ratios are stretched relative to the S&P 500.

Recent events have revealed the fatal weakness, or kryptonite, of the asset-light platform company’s business model.

At the heart of the asset-light platform company’s kryptonite is a tradeoff between efficiency and resiliency. The offshoring boom was built upon the idea of efficiency. Perform all of the high value-added design work at the home office, and outsource the lower value-added production offshore. This focus on efficiency globalized manufacturing supply chains and sparked the emerging market boom illustrated by Branko Milanovic’s famous elephant graph. The winners were the middles classes in the EM economies and the very rich, who engineered the globalization initiative. The losers were the inhabitants of subsistence economies, who were not industrialized enough to take part in the boom, and the workers in industrialized countries.

Fast forward to today, what have we learned about the tradeoffs?

Consider the vulnerabilities exposed by the combination of the Sino-American trade war and the pandemic in semiconductors. Most American semiconductor companies have moved to the fabless manufacturing business model, as described by Wikipedia.

As with most technology-intensive industries, the silicon manufacturing process presents high barriers to entry into the market, especially for small start-up companies. But integrated device manufacturers (IDMs) had excess production capacity. This presented an opportunity for smaller companies, relying on IDMs, to design but not manufacture silicon.

These conditions underlay the birth of the fabless business model. Engineers at new companies began designing and selling ICs without owning a fabrication plant. Simultaneously, the foundry industry was established by Dr. Morris Chang with the founding of Taiwan Semiconductor Manufacturing Corporation (TSMC). Foundries became the cornerstone of the fabless model, providing a non-competitive manufacturing partner for fabless companies.

Here is the tradeoff. Bloomberg recently reported that manufacturers have discovered that a chip shortage has made them hostage to Korean and Taiwanese semiconductor companies.

There’s nothing like a supply shock to illuminate the tectonic shifts in an industry, laying bare the accumulations of market power that have accrued over years of incremental change. That’s what’s happened in the $400 billion semiconductor industry, where a shortage of certain kinds of chips is shining a light on the dominance of South Korean and Taiwanese companies.

Demand for microprocessors was already running hot before the pandemic hit, fueled by the advent of a host of new applications, including 5G, self-driving vehicles, artificial intelligence, and the internet of things. Then came the lockdowns and a global scramble for computer displays, laptops, and other work-from-home gear.

Now a resulting chip shortage is forcing carmakers such as Daimler, General Motors, and Ford Motor to dial back production and threatens to wipe out $61 billion in auto industry revenue in 2021, according to estimates by Alix Partners. In Germany, the chip crunch is becoming a drag on the economic recovery; growth in China and Mexico might get dinged, too. The situation is spurring the U.S. and China to accelerate plans to boost their domestic manufacturing capacity.
The technological prowess and massive investment required to produce the newest 5-nanometer chips (that’s 15,000 times slimmer than a human hair) has cemented the cleavage of the industry into two main groups: those that own their fabrication plants and those that hire contract manufacturers to make the processors they design. South Korean and Taiwanese companies figure prominently in the first camp. “South Korea and Taiwan are now primary providers of chips like OPEC countries once were of oil,” says Ahn Ki-hyun, a senior official at the Korea Semiconductor Industry Association. “They don’t collaborate like OPEC. But they do have such powers.”

Onshoring manufacturing is not a practical alternative, according to Barron’s.

U.S. companies lead the world in designing microchips. But two Asian players, Taiwan Semiconductor Manufacturing (ticker: TSM) and Samsung Electronics (005930.Korea), control manufacturing. The two account for three-quarters of the complex “logic” chips produced globally, and all of the most advanced chips with a thickness of seven nanometers or less, says James Lim, Korea analyst at Dalton Investments.

Intel (INTC), the leading U.S. manufacturer, has fallen off the Asians’ pace, and catching up seems like a long shot. “Semiconductors are the most complex things that humans make,” says Brian Bandsma, emerging markets portfolio manager at Vontobel Quality Growth. “It isn’t something you can solve by throwing money at it.”

Do you want efficiency or resiliency? You can’t have both.

The recent power outages in Texas is another lesson in the tradeoffs between efficiency and resiliency. The designers of the system opted to isolate most of the Texas power grid from the rest of the country and the utilities decided not to winterize their system against snowstorms, which was a tail-risk that they decided they could live with. We know the result.
This is not a place to point fingers. Every electrical generating system has its vulnerability. In January 1998, Quebec suffered an unforeseen ice storm that left over a million customers without power in a part of the country that should have been cognizant of harsh winter weather. Most of Hydro-Québec’s transmission lines were overhead lines that were overcome by freezing rain and heavy ice, which knocked over numerous trees and took down power lines.
Nuclear power has its special vulnerabilities as well. The Japanese earthquake of 2011 took the Fukushima nuclear reactor offline and it was the most significant nuclear accident since Chernobyl. France, which relies heavily on nuclear power for electrical generation, has had to shut down its reactors during summer heatwaves because the local river water used to cool reactors had become overly warm.
Renewable energy has its own blemishes. Wind and solar depend on the weather and it is not always on. That leads to fluctuation in power generation and a system that overly depends on renewable energy will not have the same “always-on” electrical power resiliency of other sources such as hydro, nuclear, and carbon-based energy such as coal, oil, and natural gas. There will be times when the grid has too much energy and users may be paid to take power. Other times, there will be shortages when the air is still, or when the sun isn’t shining.

The pendulum swings back

None of this analysis invalidates the asset-light platform company business model. However, recent events have highlighted the need for these companies to diversify and harden their supply chains and make them more resilient. This will make them less efficient and compress margins.
Take a mundane business like apparel. I could walk into a store and buy an off-the-rack men’s designer suit for several thousand dollars. I was in Vietnam in late 2019 and visited a town that operated on the “Hong Kong tailor” model, which offered tailored suits for nearly one-tenth the price of the designer suit on a 24-48 hour turnaround. There are also companies located in North America that measure customers for suits, send the measurements offshore, and have the suit delivered to the customer within weeks. The price point is somewhere between the full retail price and the Vietnamese tailor. What initiatives will companies like that take to harden and diversify their supply chain, and what will it cost?
As the focus starts to shift from efficiency to resiliency, expect the P/E premium to compress. That’s the fundamental reason why value investing will shine in the next market cycle. 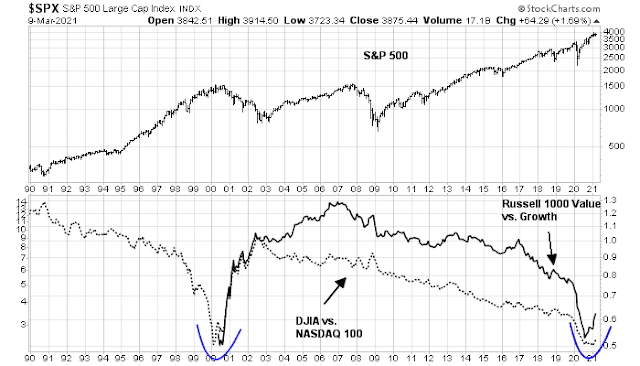