Mid-week market update: The rebound in the NASDAQ and growth stocks was not a surprise. Value outperformed growth by the most on record last week – and that includes the dot-com crash that began in 2000.

Here is another illustration of how much growth is oversold relative to value. No matter how you measure it, large and small-cap value had turned up decisively against growth. The uptrend appears extended, and a pullback was no surprise. Nevertheless, the intermediate-term trend favors value over growth. 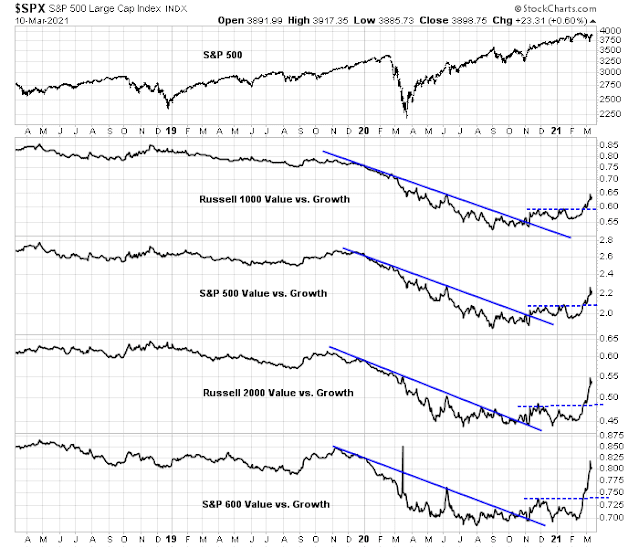 I had pointed out before that the NASDAQ McClellan Oscillator (NAMO) had become deeply oversold. As well, %Bullish on P&F had reached an oversold reading while the NASDAQ 100 was experiencing a positive 5-day RSI divergence. A relief rally was inevitable. 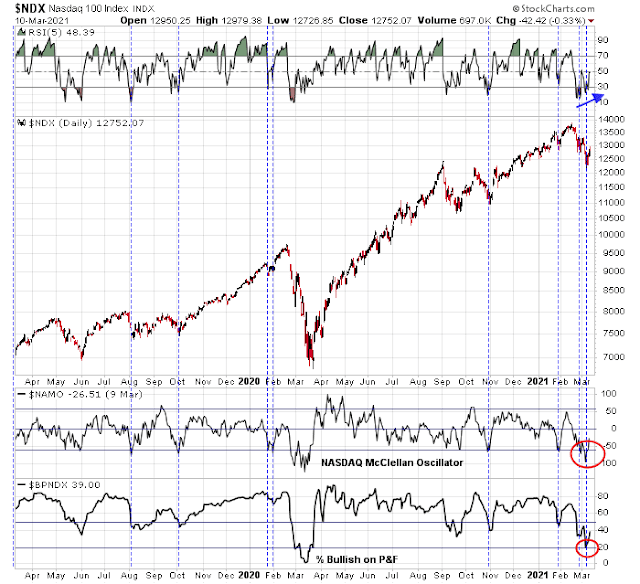 How far can the rebound run? For some clues, I looked at the behavior of the NASDAQ 100 in 2000 and 2001, which was the period after the dot-com bubble had burst. There were six episode during this period when NAMO had become oversold. The initial relief tally lasted between 4-7 calendar days. In three of the six instances, the index went on to rise further in the days ahead. 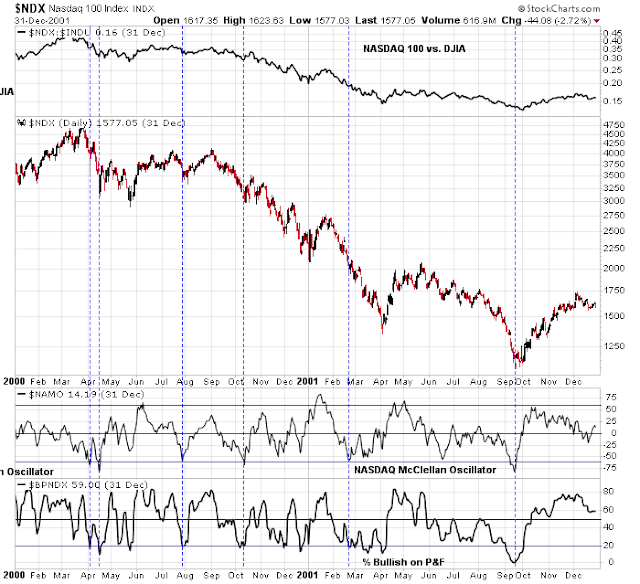 Here is further analysis indicating that the growth rebound is not sustainable. Nautilus Research studied how the NASDAQ 100 performed when it rose at least 3.5% for the first time in three months. The success rate of positive returns after one week was 50%, with an average return of -1.4%. The average after one month was -1.0%. 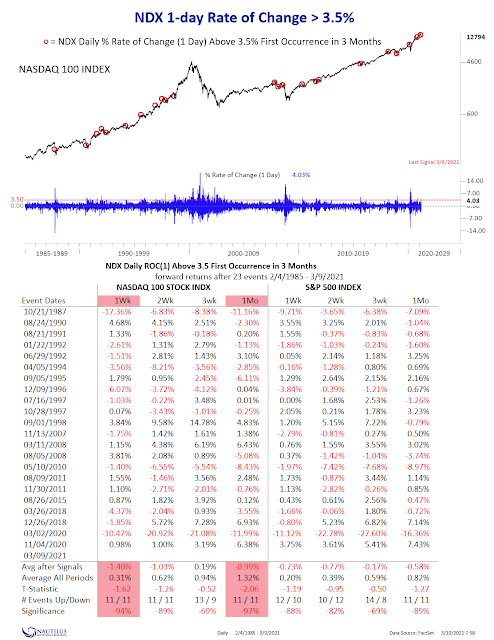 I don’t mean to sound overly negative, there are some factors supportive of further gains in growth stocks. Risk appetite, as measured by Bitcoin is improving, though the relative performance of ARKK deteriorated today.

Bond prices appear to be bottoming after exhibiting a positive RSI divergence. This should be supportive of growth stocks in the short-term. 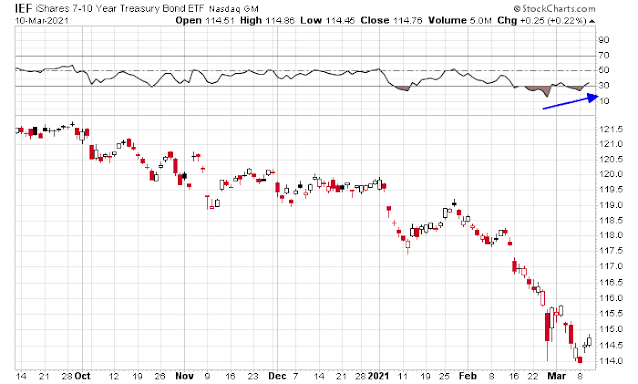 After the recent rise in yields, Treasuries should be attractive to foreign investors on a hedged basis (returns spreads are shown based on holding a 10-year Treasury with a one-year currency hedge). 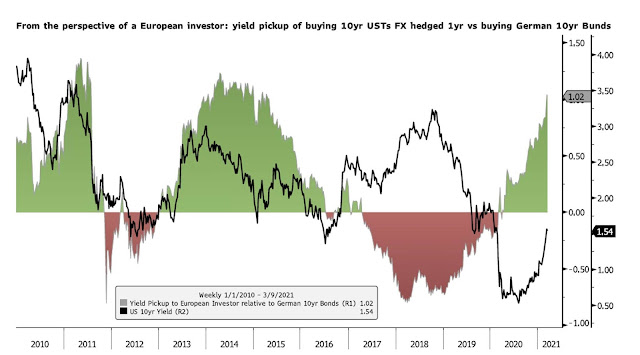 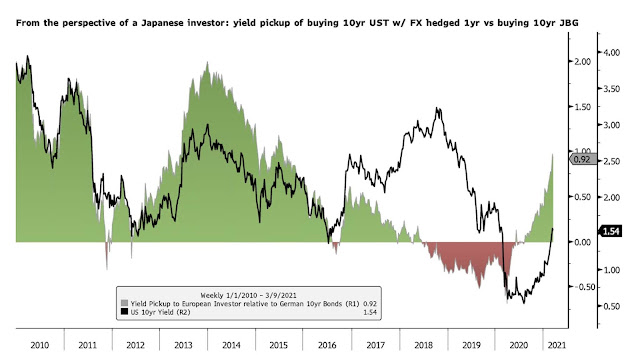 As growth and value markets diverge, forecasting the outlook for the S&P 500 is more difficult. Growth sectors represent 44.1% of index weight, while value and cyclical stocks make up 25% of the S&P 500. The 2000 and 2001 market template is not useful. The economy was just entering a recession then, but it is exiting a recession today. 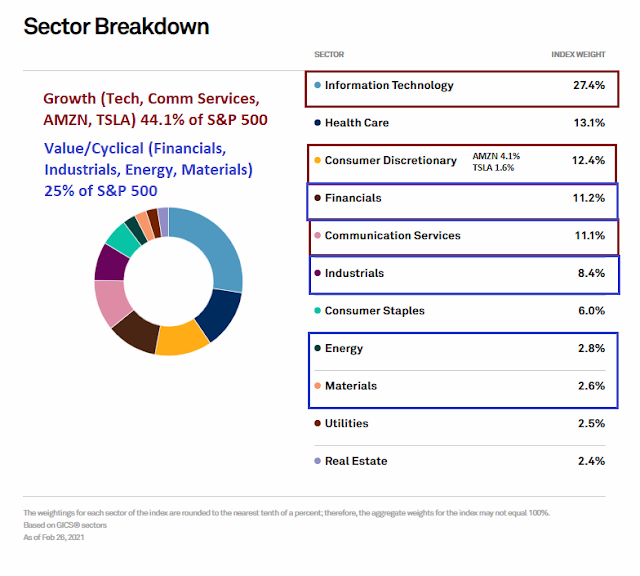 My best guess is therefore continued choppiness for the S&P 500 but investors should continue to overweight value over growth. The reflation and cyclical trade as represented by the Rising Rates ETF (EQRR) still has legs, and that will put upward pressure on Treasury yields which is bearish for growth. 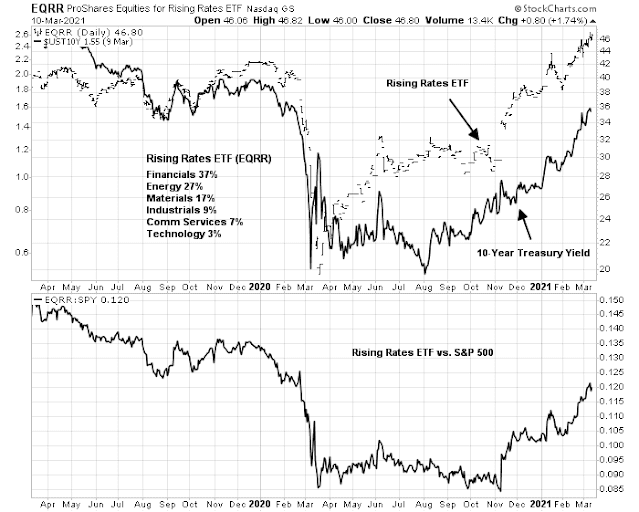 As the adage says, the trend is your friend. Buy value and cyclical stocks, avoid growth.