Rip the bandaid off now or later? – Humble Student of the Markets 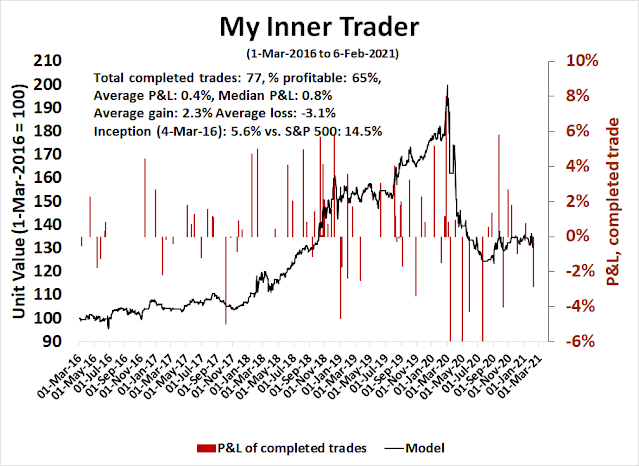 Was the recent bout of r/WSB induced volatility just a brief storm? The S&P 500 remains in an uptrend on the weekly chart, though it is exhibiting a negative 5-week RSI divergence. 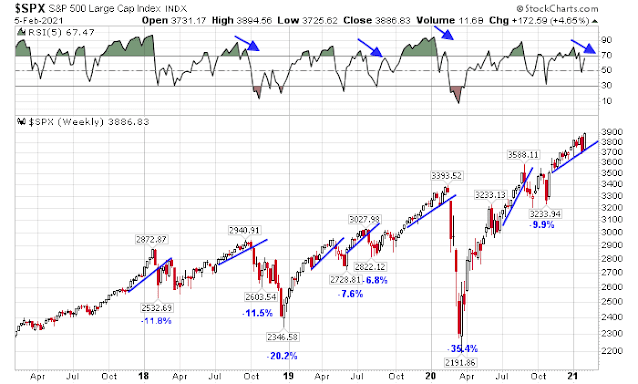 Despite last week’s recovery, technical alarms are ringing everywhere. Will the market gods rip the bandaid off now with a minor pullback or face a major bearish episode later?

A number of indicators with long horizons are flashing warnings. The Citigroup Panic/Euphoria Model recently reached a record high euphoric level but readings have stabilized after backing off slightly.

Business Insider reported that BoA’s Sell Side Indicator is showing signs of “dangerous optimism” not seen since August 2007. This indicator is only 2% away from a sell signal. 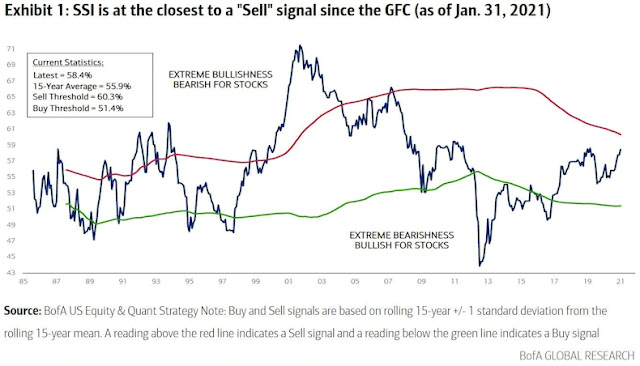 The 10-year Treasury yield has been rising steadily and stands at 1.17%. The increase in yields will present bonds as a more attractive alternative to stocks put valuation pressure on equity prices.

The USD, which has been inversely correlated to stock prices in the last year, is strengthening. This is also setting up as a negative divergence to be concerned about.

Market internals are weak. Leadership is narrowing to levels last seen during the NASDAQ bubble top and the Nifty Fifty top. Just remember Bob Farrell’s Rule #7: “Markets are strongest when they are broad and weakest when they narrow to a handful of blue-chip names.”

Momentum is fading. The NYSE McClellan Summation Index (NYSI) surged to over 1000 and recycled. About two-thirds of similar past episodes (red vertical lines) have resolved bearishly. In most of the cases where the market has pulled back, NYSI fell to zero before making a bottom. 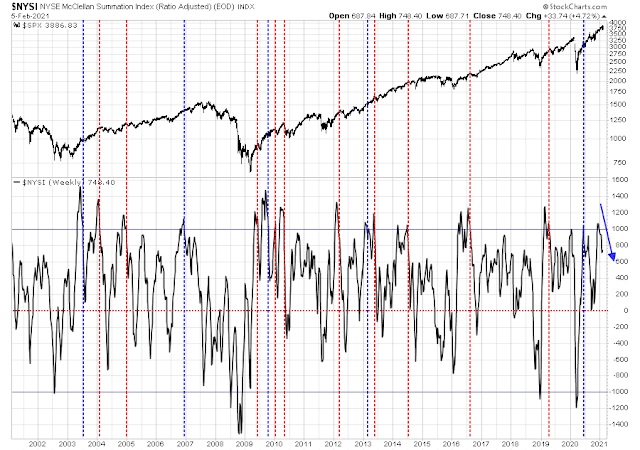 The one exception to the picture of deteriorating internals is the amazing NASDAQ. The NASDAQ 100 broke out of a relative consolidation range (middle panel) after breaking a relative uptrend in late October and early November. Moreover, the high-octane ARK Innovations ETF (ARKK) appears to have found a second wind relative to the S&P 500 (bottom panel). 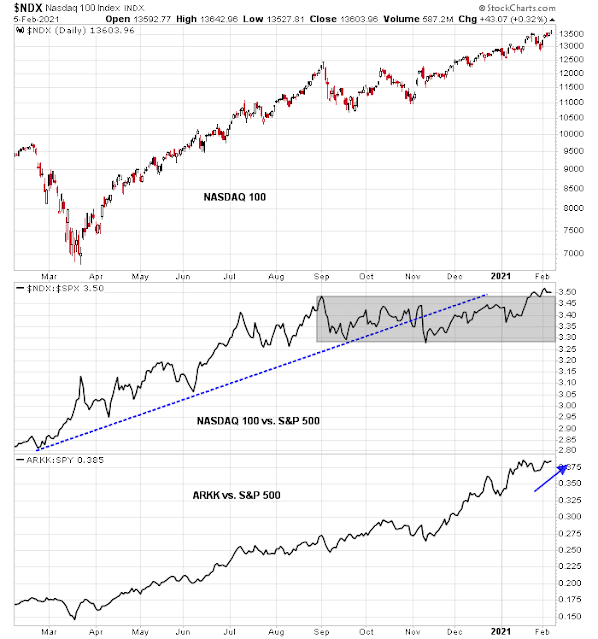 From a purely technical perspective, NASDAQ leadership is well deserved. The NASDAQ Advance-Decline Line broke out of a multi-year base and its performance relative to the S&P 500 has been stunning. 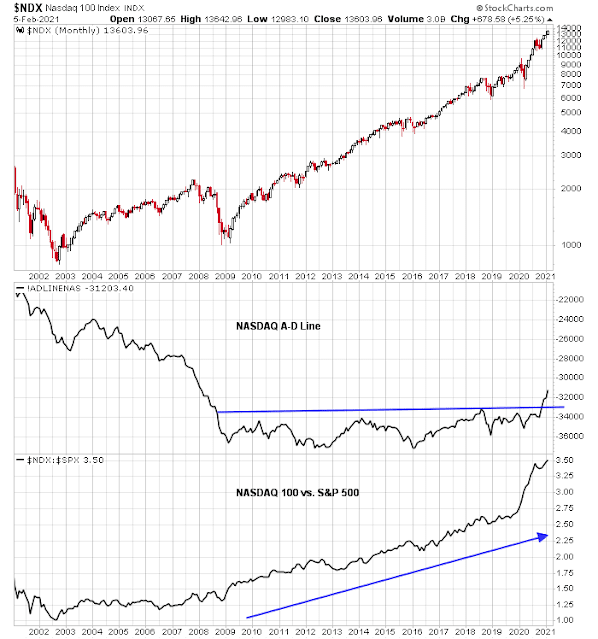 Are the animal spirits stirring again? Just look at the growth in Reddit groups. These readings suggests that small retail investor trader activity is the root cause of the latest NASDAQ frenzy. 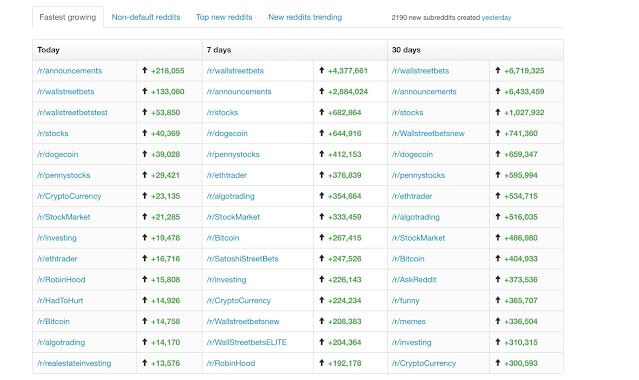 The WSJ reported that the day trading crowd are moving into SPACs, or blind trust shells with no underlying businesses. I can see that this is going to end well and everyone is going to be rich.

Day traders fueling enormous gains in popular stocks such as GameStop Corp. GME 19.20% are also powering big swings for another suddenly hot investment: so-called blank-check companies.
Special-purpose acquisition companies—shell companies planning to merge with private firms to take them public—are rising more than 6% on average on their first day of trading in 2021, up from last year’s figure of 1.6%, according to University of Florida finance professor Jay Ritter. Before 2020, trading in SPACs was muted when they made their debut on public markets. 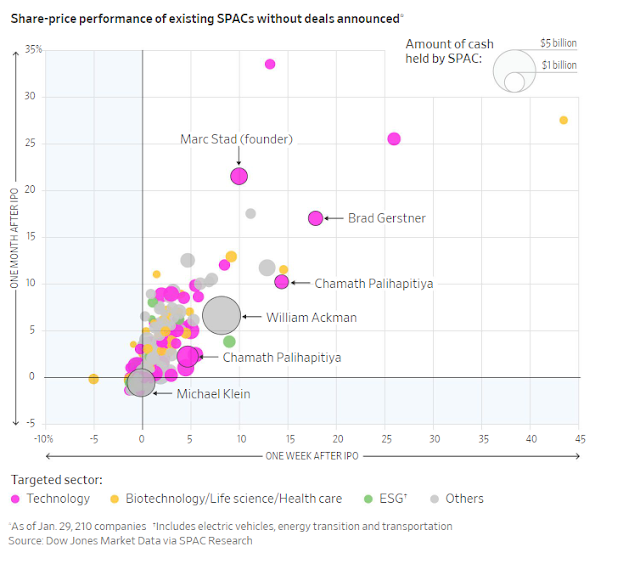 If you have to justify NASDAQ strength by pointing to the dot-com bubble, something is seriously wrong. 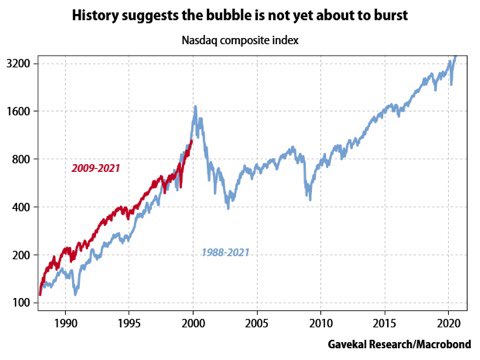 What should we make of the market’s continued strength in the face of all these warnings? Alex Barrows recently declared a major monthly sell signal. Barrow then qualified his bearish call by proposing a scenario of a “complex double top”. 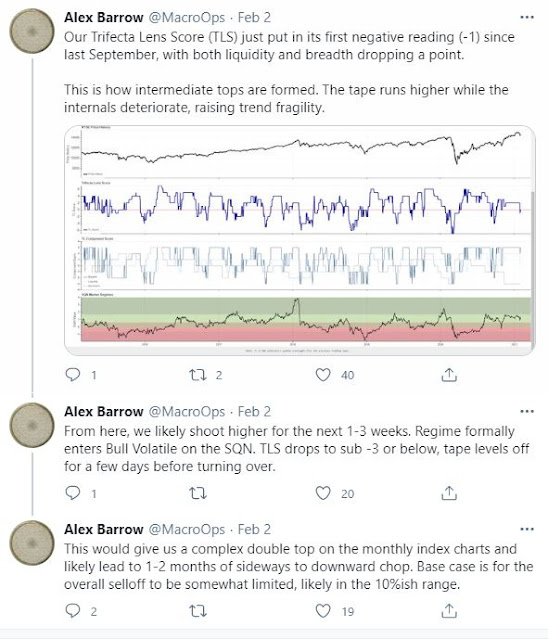 In conclusion, this market is highly extended and can pull back at any time. The market gods can rip the bandaid off now with a minor 5-10% pullback or allow the market to advance further and resolve this in a major bearish episode. 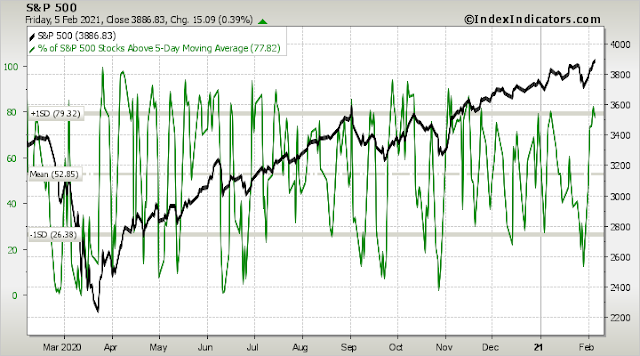 While I remain long-term bullish, short-term risk levels are high. Investment-oriented accounts should refrain from deploying new cash and consider lightening up equity positions on rallies. Traders can play the melt-up game, but at their own risk. The more prudent course of action is to stay nimble and watch for a downside break before turning overly bearish.

14 thoughts on “Rip the bandaid off now or later?”