WSB squeeze over, sound the all-clear? – Humble Student of the Markets

Mid-week market update: The fever on the r/WSB squeeze has broken. As well, the elevated nature of sentiment readings has begun to normalize. Does that mean the correction is over? 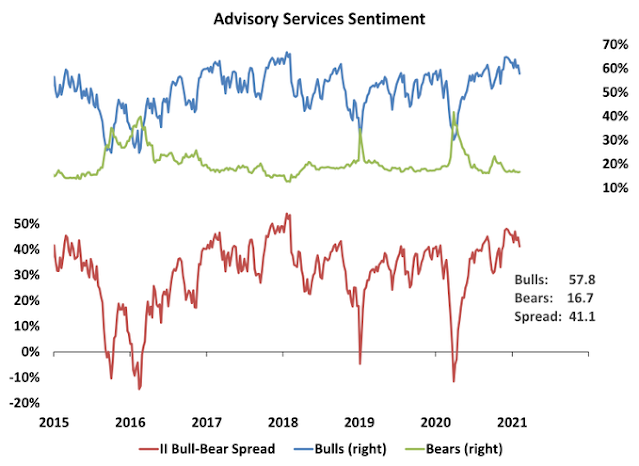 In the past few days, I have had an unusual number of people ask me that question. My answer has been, “In the words of technical analyst Walter Deemer, when it comes time to buy, you won’t want to.”
Do you still want to buy?

To be sure, sentiment readings have come off the boil. Callum Thomas conducts a weekly (unscientific) poll on Twitter every weekend. His latest readings show that sentiment has swung net bearish after several weeks of elevated bullish readings. Similar past episodes of bearish sentiment after prolonged high bullishness have resolved either in either choppy downward action or further corrective action (warning, n=2). 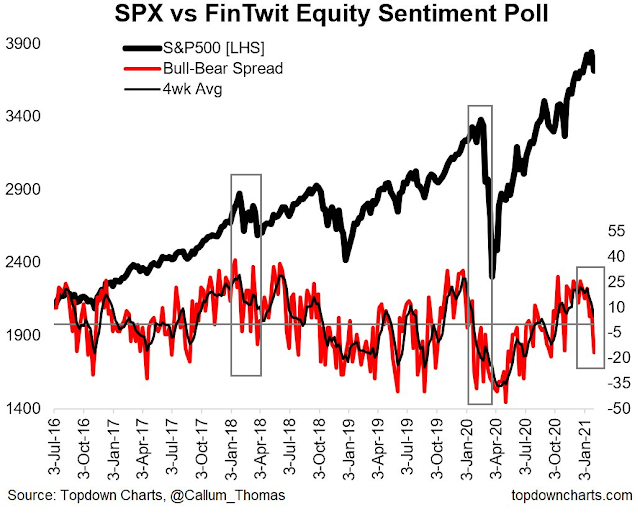 There are other disturbing signs that the pullback isn’t over. I know that correlation isn’t causation and correlations can break apart in unexpected ways, but the USD has been strengthening this week even as the stock market rallied. The S&P 500 has been inversely correlated with the USD Index for the last year, and we are starting to see signs of a negative divergence.

From a technical perspective, the USD Index rallied through a falling trend line and it is poised to strengthen further. 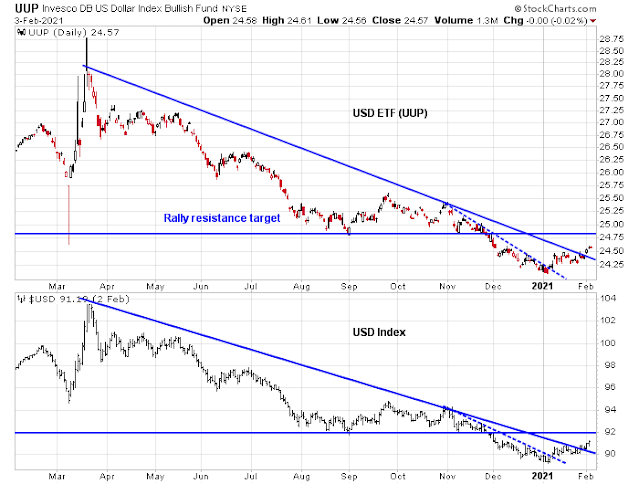 Investors remain in a crowded short position in the USD. This is a setup for further greenback strength. 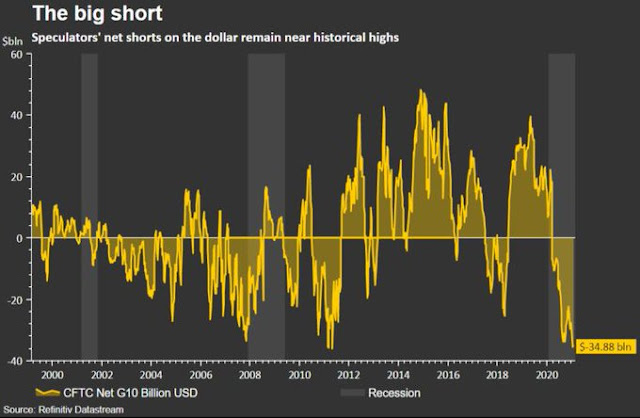 Take a look at the growth differential between the US and the two core eurozone coutnries. The gap could widen further until the EU Recovery Fund really kicks in. This will put downward pressure on EUR and upward pressure on USD. 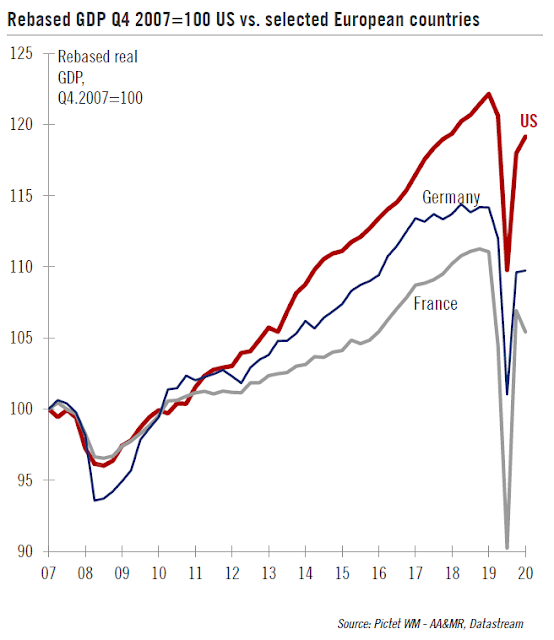 Correlation isn’t causation, but this is a negative divergence to be worried about.

In addition, market internals is still weak. Even as the S&P 500 rallied back through the rising trend channel, breadth indicators are not confirming the index’s strength. 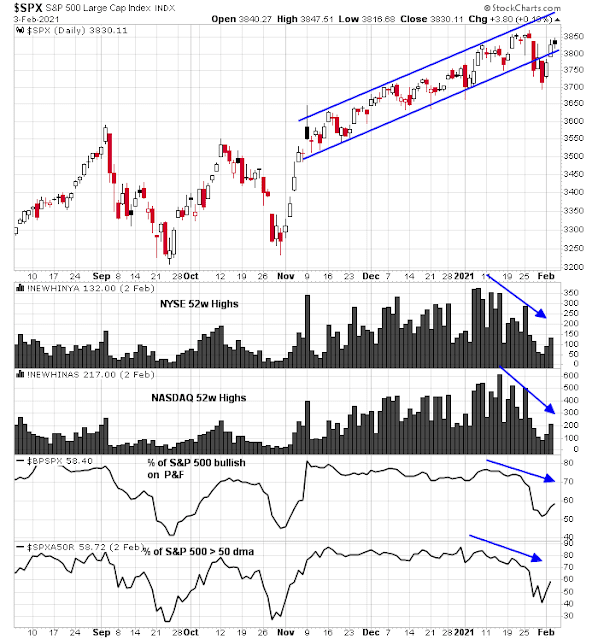 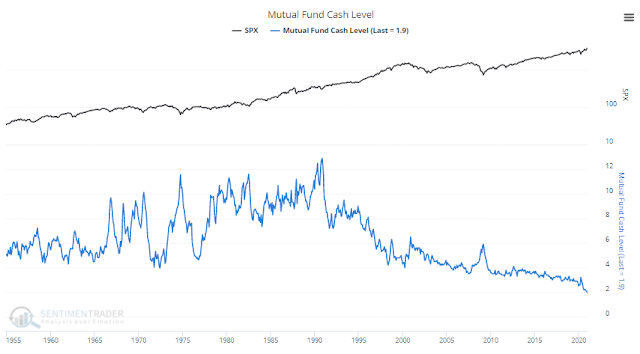 So is pension fund cash. 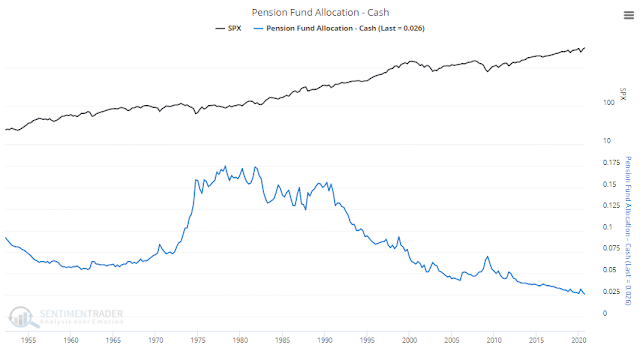 The Fed has flooded the financial system with liquidity as M2 money supply has skyrocketed along with the savings rate. That analysis has led some analysts to conclude that there is cash on the sidelines waiting to be deployed. However, the low levels of mutual fund and pension fund cash leads to the interpretation that the “cash on the sidelines” are precautionary savings rather than funds available for investment.

My base case scenario calls for more flat to down choppiness. Steve Deppe found that when “the S&P 500 falling -3% or more during an uptrend (i.e., positive returns over the trailing 12 weeks) that closes within -10% of our all-time high weekly close”, the market tends to be volatile, with a bearish bias.

As of the close last night (Tuesday), the % of S&P 500 above their 5 dma had reached a near overbought condition. The reflex rally that began Monday is fizzling out. 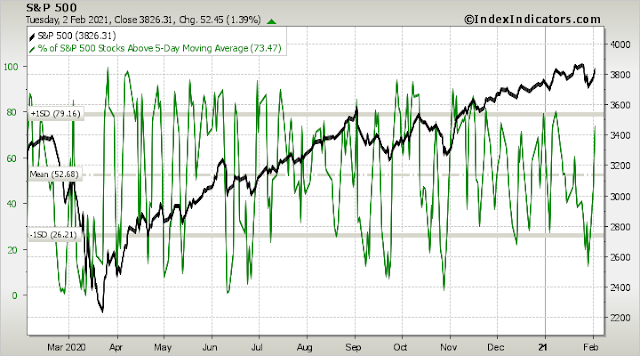 Keep an eye on the market’s reaction to Friday’s NFP report as a way of gauging the market’s psychology. The report is likely to print a strong positive surprise owing to the vagaries of seasonal adjustment. Labor economist Diane Swonk pointed out that the economy has “lost an average of 2.9 million jobs every January” from retail, restaurants and professional services like couriers and messengers. This year, the scale of the layoffs will be far less because of the pandemic, which leads to a strong positive seasonal adjustment. How will the market react to this probable “good” news?
The S&P 500 hourly chart shows two gaps. One above with the top at about 3850, and one below at 3780-3790. My inner trader remains short and he has put a stop just above 3850.

My inner investor is bullishly positioned, but he has mitigated the short-term risk by selling covered calls against some long positions.
Disclosure: Long SPXU

29 thoughts on “WSB squeeze over, sound the all-clear?”