Mid-week market update: The last day of the Santa Claus rally window closed yesterday, and Santa has returned to the North Pole. But he left one present today in the form of an intra-day all-time high for all the good boys and girls who ever doubted him. 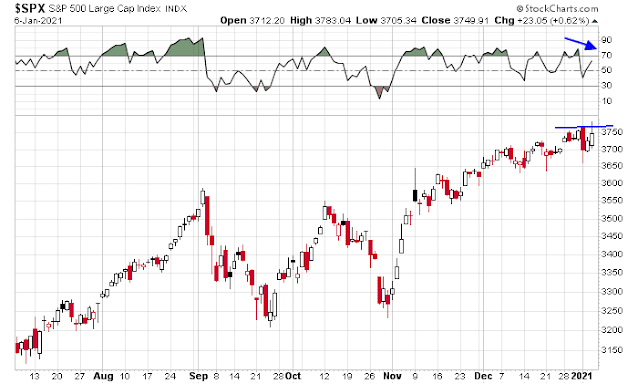 Tactically, today’s rally may be the last hurrah for the bulls.

I have been writing about the extended nature of sentiment readings for a while. The Goldman Sachs sentiment dashboard has been stable and elevated for at least a month. 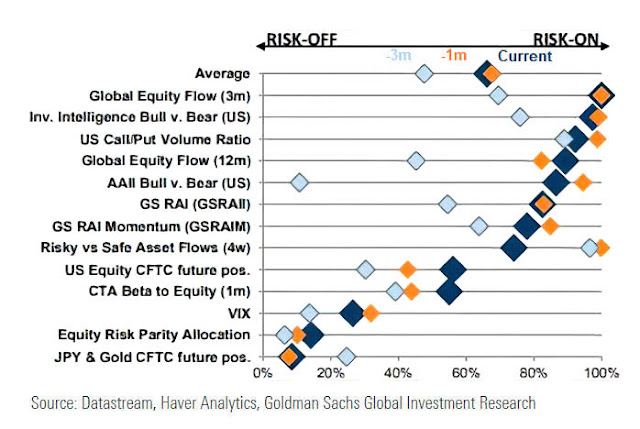 It is said that while tops are processes, bottoms are events. Excessively bullish sentiment have a way of not mattering until it matters. Deprived of the its seasonal tailwinds, the stock market is increasingly vulnerable to a setback after a period of prolonged frothiness. Mark Hulbert reported last week that his Hulbert Stock Newsletter Sentiment Index is in its 92nd percentile, which is a severe cautionary signal.

Consider the average recommended equity exposure level among the short-term market timers the HFD tracks. (This average is what’s reported by the Hulbert Stock Newsletter Sentiment Index, or HSNSI.) Recently the HSNSI was higher than 92% of daily readings since 2000. In fact, this recent average exposure level is close to being just as high as it was at the bull-market top in February 2020.

The TD-Ameritrade Investor Movement Index (IMX) has returned to a new recovery high, indicating a high level of retail bullishness. 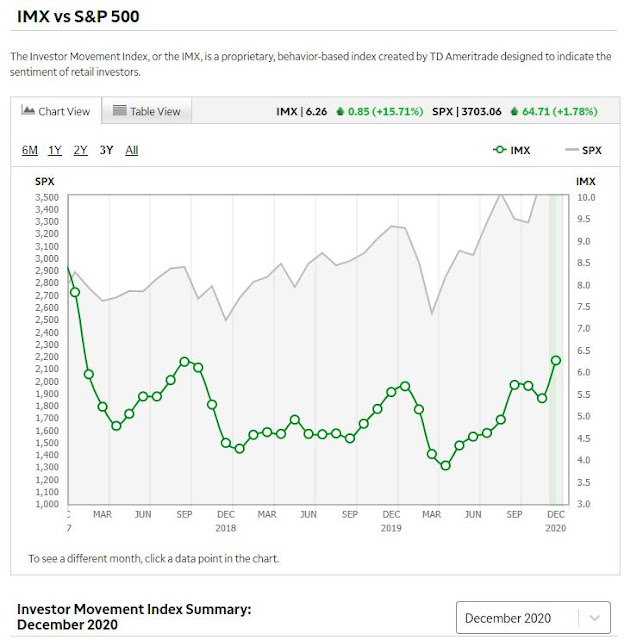 As well, S&P 500 Gamma exposure is in the top 0.4% of its history. For the uninitiated, gamma measures the degree of exposure option dealers have to the market. The combination of a positive gamma and rising market forces dealers to hedge by buying stock, and vice versa. These nosebleed gamma readings are warning signals of frothiness, which are usually followed by market corrections. 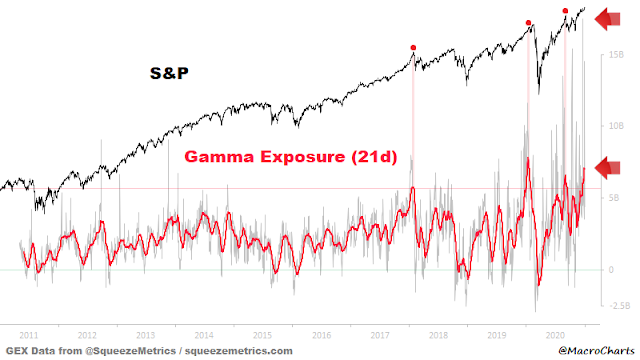 Notwithstanding the scene of protesters storming the chambers of the US Senate, what else could derail this rally?

One candidate is a negative surprise from the Jobs Report due Friday. Market consensus calls for 100K new jobs, but the pace of deceleration is becoming alarming. Oxford Economics has a negative estimate, which would be a shocker. 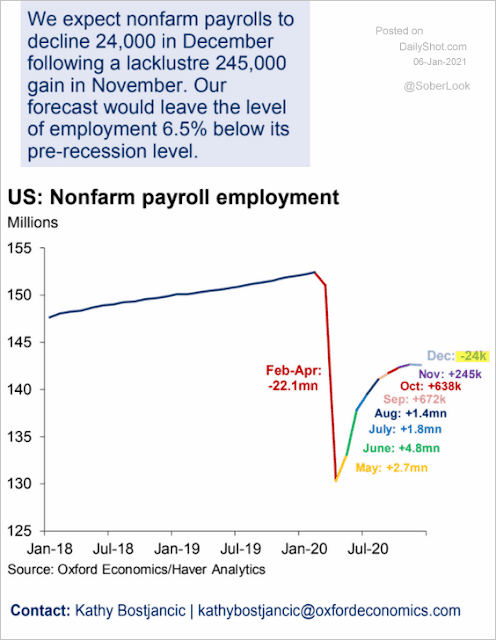 Today’s ADP miss of -123K compared to expectations of a gain of 75K is consistent with the negative NFP print thesis. 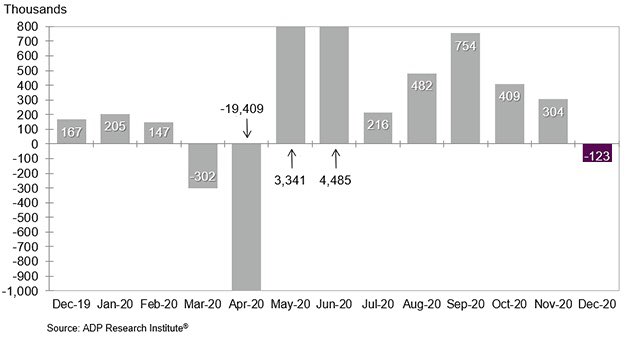 High frequency data shows that economic activity has fallen off a cliff, not just in the US, but in most advanced economies. 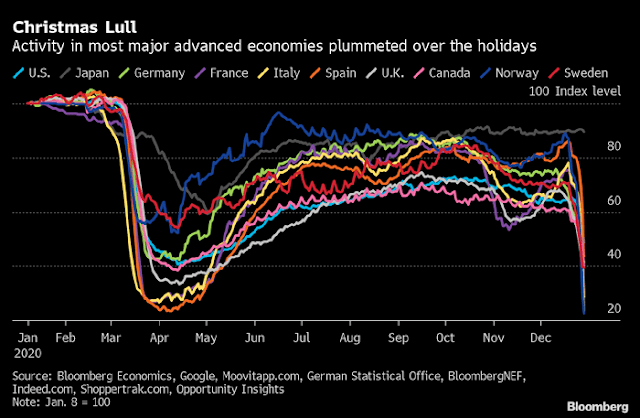 The Citi Economic Surprise Index, which measures whether economic data is beating or missing expectations, has been slowly fading indicating a loss of macro momentum.

To be sure, these slowdown effects are temporary. But the pace of vaccinations could be an emerging negative for Q1 and Q2. The market has already discounted the widespread vaccination of the population of developed economies by mid-year. Logistical difficulties with vaccine rollout could be a source of near-term disappointment and spook risk appetite. 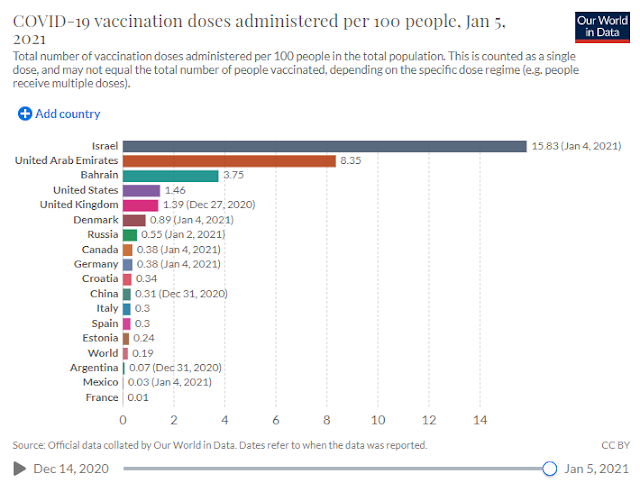 For the last word, I offer this tweet from SentimenTrader. 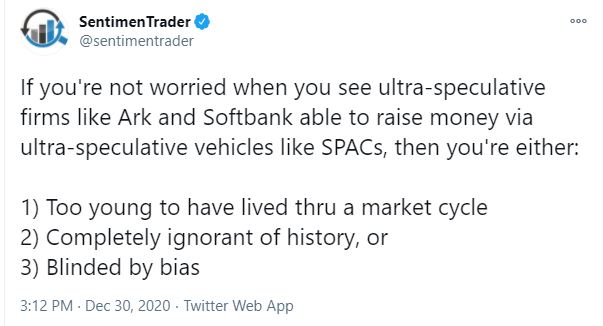 While I remain long-term bullish, short-term equity risk is rising. The market can stage a 5-10% correction at any time. Subscribers received an alert yesterday that my Inner Trader had stepped to the sidelines. This is a time for caution.

64 thoughts on “Santa has returned to the North Pole”