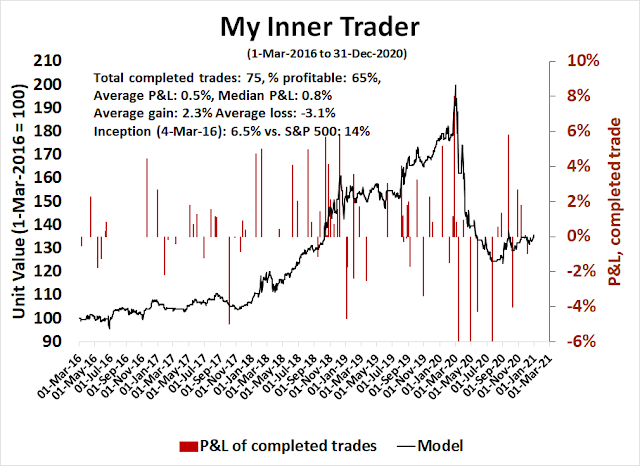 Three weeks ago, I rhetorically asked if the market would surge higher during a seasonally favorable time of year (see Time for another year-end FOMO stampede?). I observed that “the Fear & Greed Index followed a pattern of an initial high, a retreat, followed by a higher high either coincident or ahead of the ultimate stock market peak.” (Warning, small sample size of n=4). 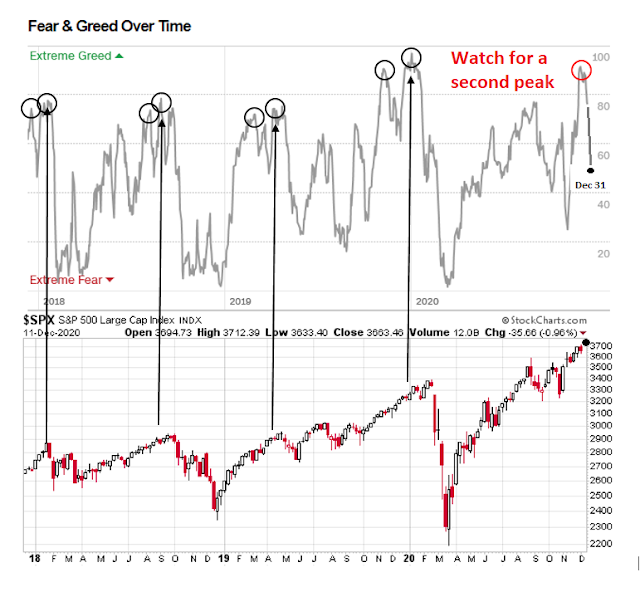 Since I wrote those words, the S&P 500 rose a respectable 2.5% while the Fear and Greed Index fell to 51. It’s not exactly a stampede. The main question is: “Will Fear and Greed exhibit a second peak before the actual market peak?”

Here are the bull and bear cases. The bulls can point out that the S&P 500 staged an upside breakout to fresh all-time highs while trading in an ascending channel, which is constructive.

Ryan Detrick at LPL Financial found that strong late year momentum carries on into January and the following year. Since the S&P 500 is up 14.3% in November and December, investors can expect further gains (small sample size: n=5).

I am indebted to Urban Carmel for the idea for a generalized version of Detrick’s study of two-month price momentum. My analysis added a sentiment indicator, which shows that there were 12 episodes where two-month S&P 500 returns reached 10% or more. Only 2 of the 12 resolved in a corrective manner. Moreover, overly bullish sentiment, as measured by the AAII bull/bear spread, did not matter to returns. However, Urban Carmel added a caveat that the current episode is not like the others, which “all happened at major lows (like March of this year); 1987 started after SPX dead flat for 9 months”. 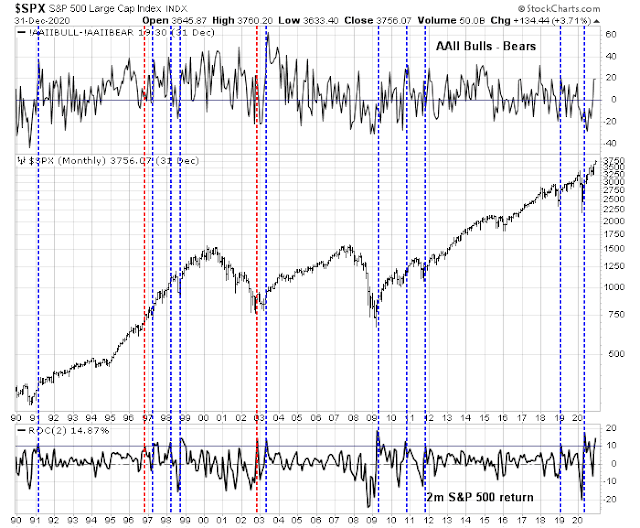 Analysis from Nomura indicates that hedge fund positioning in developed market equities is not excessive. Should the market engage in a momentum chase, there is more room for this fast money to buy. 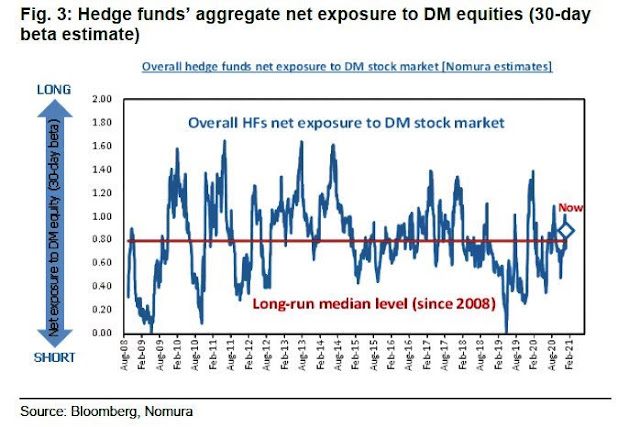 However, a number of ominous warnings are signaling a rising likelihood of a market correction. The NYSE McClellan Summation Index (NYSI) is starting to roll over. NYSI levels of over 1000 were signals of strong momentum, but pullbacks after 1000+ readings are a warning of market weakness. There have been 16 such signals in the last 20 years. 11 of them have resolved bearishly (red vertical lines), while 5 have been bullish (blue lines). 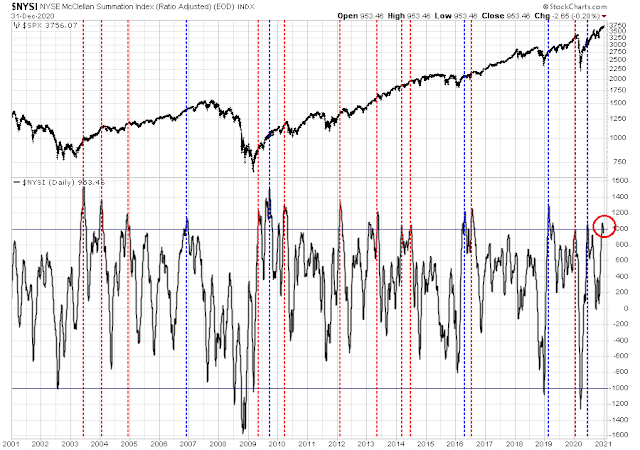 In addition, the quality factor is also flashing a warning by behaving badly. The relative performance of both large and small-cap quality factors have plunged, indicating a low-quality junk stock rally. Such conditions during past market advances have been indications of excessive speculation, and an imminent market top. 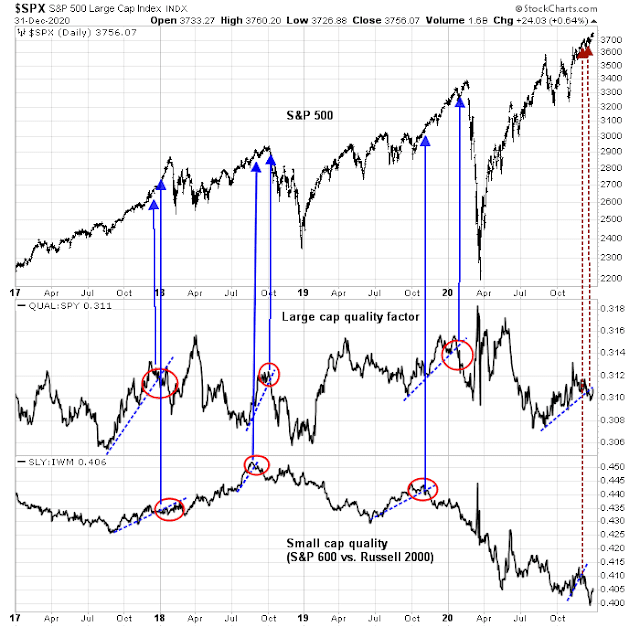 There is a minor negative divergence from my equity risk appetite indicators. The ratio of high beta to low volatility stocks is starting to fall, which is indicative of poor internals. As well, the equal-weighted consumer discretionary to consumer staple ratio, which minimizes the weights of Amazon and Tesla, is also exhibiting signs of minor weakness.

In addition, Jeff Hirsch of Trader’s Almanac wrote that the traditional Santa Claus rally, which stretches from December 24 to the second day of January, sees an average S&P 500 gain of 1.3%. The return so far to December 31 have already exceeded expectations at 1.8%.
Sentiment readings continue to be very frothy. In addition to the stretched condition of numerous sentiment surveys, the divergence between the equity-only put/call ratio, which mainly measures retail sentiment and shows excessive bullishness, and the index put/call ratio, which is used for institutional hedging and shows rising cautiousness, is worrisome. 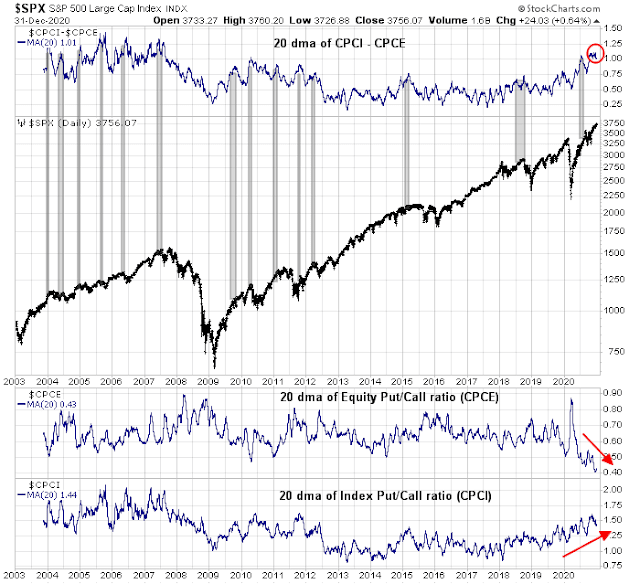 The current technical and sentiment backdrop is consistent with the seasonal post-election year pattern of a January peak and a bottom in late February. Before the bearish contingent gets all excited, the average pullback is only about  -2%. 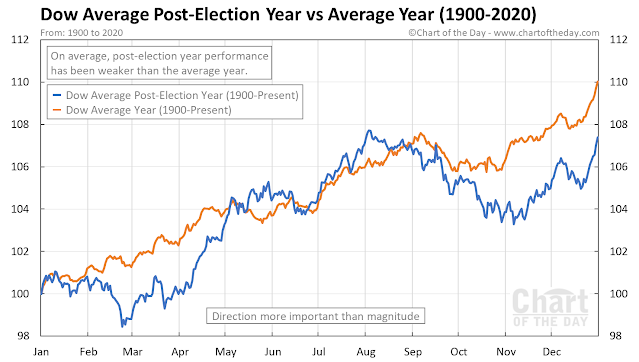 In conclusion, the stock market has behaved as expected during the period of seasonal strength. However, a number of technical warnings are starting to appear. As the market’s period of positive seasonality ends in the coming week, be prepared for the possibility of a short-term top. On the other hand, historical price momentum studies are pointing to further gains.
Keep an eye on the Fear and Greed Index for a second peak as a tactical warning of a correction. However, there is a distinct possibility that a second peak in the Fear and Greed Index may not appear this time before the market corrects. In this situation, traders are advised to keep an open mind, and maintain trailing stops as a form of risk control.
Disclosure: Long SPXL

40 thoughts on “An update on the FOMO seasonal stampede”