Mid-week market update: In my last post (see Trading the pre-Christmas panic), I pointed out that the VIX Index had spiked above its upper Bollinger Band, which is an indication of an oversold market. In the past year, stock prices have usually stabilized and rallied after such signals (blue vertical line). The only major exception was the February and March skid that saw the market become more and more oversold (red line). The market today appears to be following a more typical pattern of stabilization, which should be followed by recovery during the seasonally strong Christmas period. 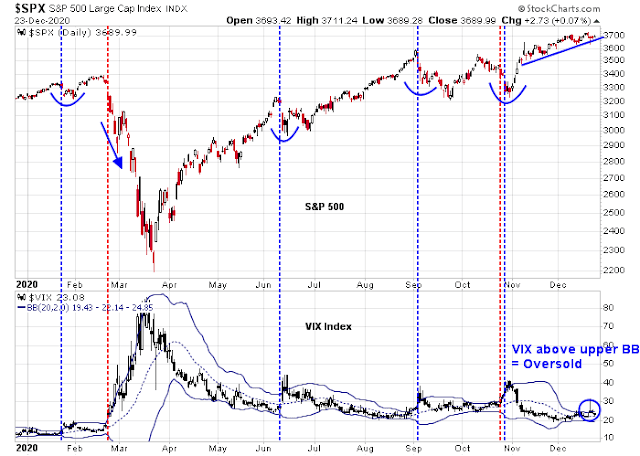 Even more constructive for the bull case was how stock prices reacted to bad news. Last night after the market close, President Trump called the latest stimulus package a “disgrace” and threatened to veto the bill. This latest surprise not only threatens the stimulus bill, it also raises the risk of a government shutdown on December 28, 2020. S&P 500 futures initially fell -0.5% overnight on the news but recovered to open green Wednesday morning.

A market’s ability to shrug off bad news is bullish.

Arguably, the real seasonally positive Santa rally starts now. Mark Hulbert defined it as the six trading days after Christmas. Going back to the Dow’s inception in 1896, Hulbert found that the DJIA rose 76.6% of the time during this period, compared to 55.7% for all other six-day periods. 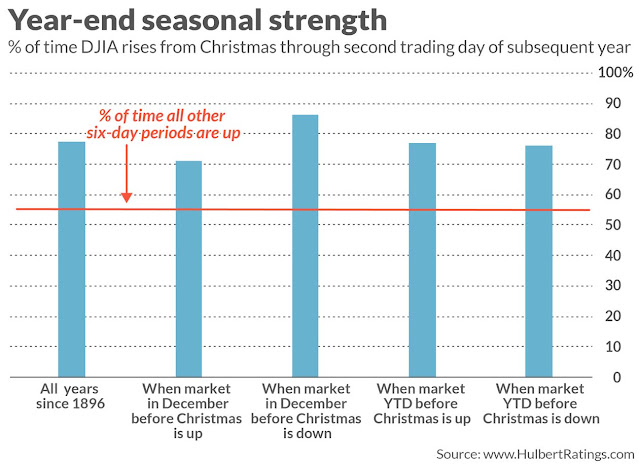 Jeff Hirsch defined the Santa rally window as the close on December 23 to the second trading day of the new year. The S&P 500 rose an average of 1.3% over this period. He went on to discuss the adage, “If Santa Claus should fail to call, bears may come to Broad and Wall.”

The “Santa Claus Rally” begins on the open on Christmas Eve day December 24and lasts until the second trading day of 2021. Average S&P 500 gains over this seven trading-day range since 1969 are a respectable 1.3%. This is our first indicator for the market in the New Year. Years when the Santa Claus Rally (SCR) has failed to materialize are often flat or down. 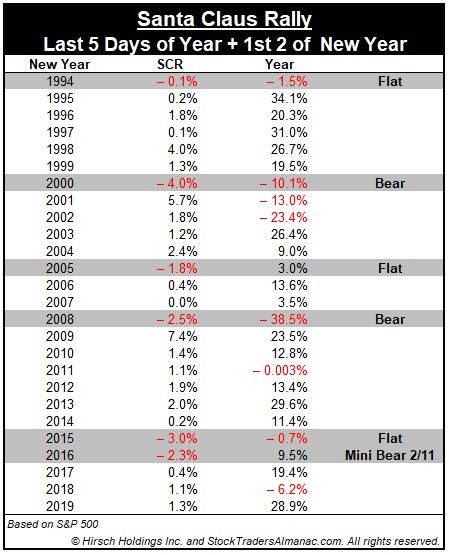 Rob Hanna at Quantifiable Edges defined the Santa Rally window as starting three days before Christmas. His NASDAQ version of the seasonal study was uniformly strong, with an average gain of 2.5% until the second trading day of the new year.

A retreat in sentiment

One short-term constructive factor is bullish sentiment readings have come off the boil. While readings are still extended, net bulls have begun to edge down. This is a positive development, especially as we enter the seasonally strong period for stocks. 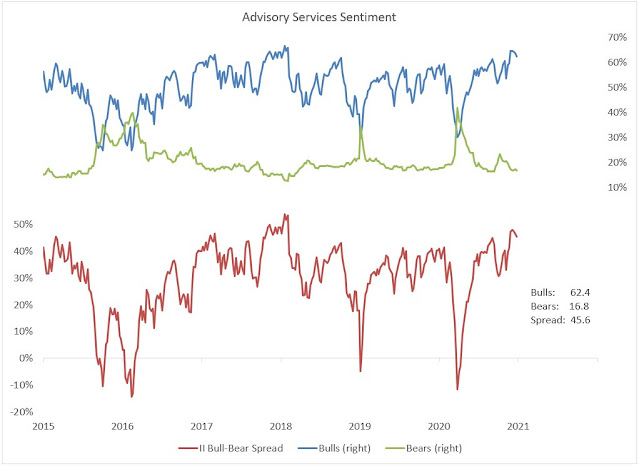 My inner trader remains long the market. He is hoping that the party will continue, at least until early in the new year. He will then reassess conditions at that time to make a decision as to what to do next.

16 thoughts on “The most wonderful time of the year…”