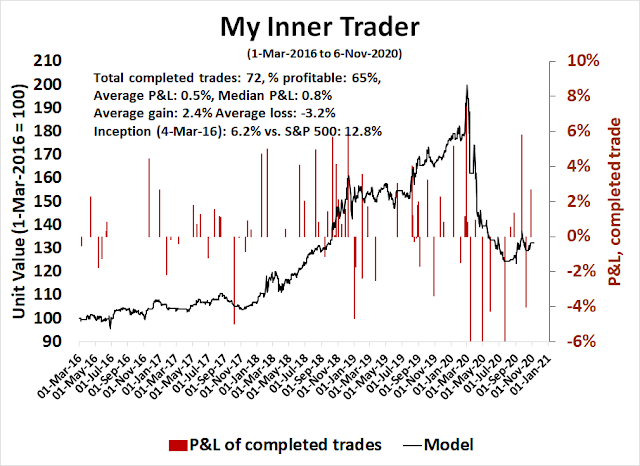 What are we to make of the post-election market advance? The S&P 500 is in the process of approaching triple-top resistance level. At the same time, the possibility of a rare Zweig Breadth Thrust (ZBT) buy signal is on the table.

A “Breadth Thrust” occurs when, during a 10-day period, the Breadth Thrust indicator rises from below 40% to above 61.5%. A “Thrust” indicates that the stock market has rapidly changed from an oversold condition to one of strength, but has not yet become overbought.
According to Dr. Zweig, there have only been fourteen Breadth Thrusts since 1945. [Ed: there have been a few more since that was written]. The average gain following these fourteen Thrusts was 24.6% in an average time-frame of eleven months. Dr. Zweig also points out that most bull markets begin with a Breadth Thrust.

The market went oversold on the ZBT Indicator and recycled off an oversold reading on October 29, 2020, which is day 1. The market has until next Wednesday, November 11, to reach an overbought condition at the 0.615 level and flash a buy signal. 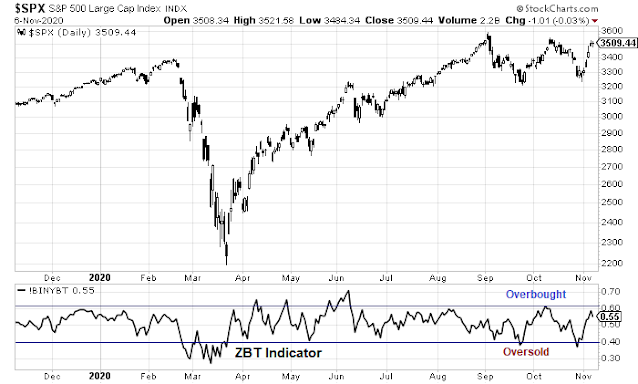 Here is the history of ZBT buy signals since 2004. The signal is rare. There have been six signals in the last 16 years. In all cases, the S&P 500 was significantly higher a year later. In four of the six cases, the market never dipped significantly after the buy signal and surged upwards. Two of the buy signals might have been considered to be weak, as they pulled back to test previous lows before rising further.

Rob Hanna at Quantifiable Edges provided hope that the positive price momentum can continue into next week. He observed that ” strong 4-day win streaks that required at least 3 days close up 1% or more” tended to see the market advance further. Day 1 of the study was last Friday. In that case, there is a good chance that the ZBT buy signal will be triggered next week.

This is something to keep a close eye on.

On the other hand, the S&P 500 is approaching a triple-top resistance level, which is defined by tops in September and October. Market internals indicates a mixed picture. Some are supportive of an advance, others are showing signs of weakness.

The chart of the large-cap S&P 500, mid-cap S&P 400, and the small-cap S&P 600 shows that strength is concentrated in the smaller companies. The S&P 400 has already broken out, and the S&P 600 is testing a key resistance level. These are constructive signs for the overall market. 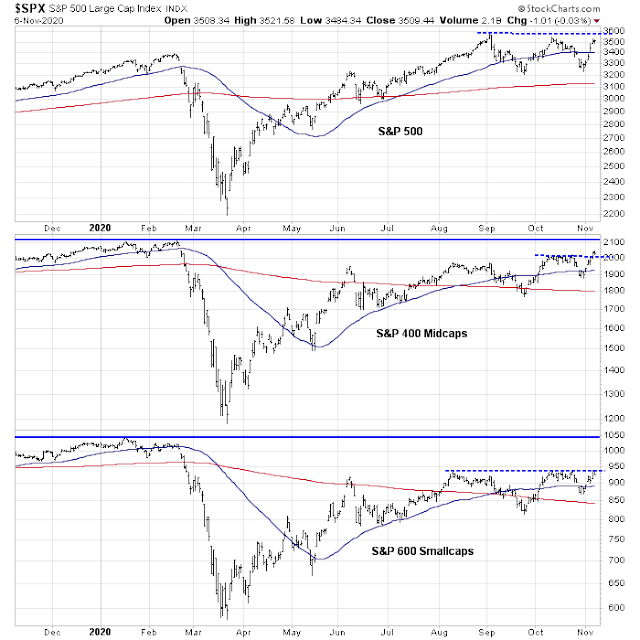 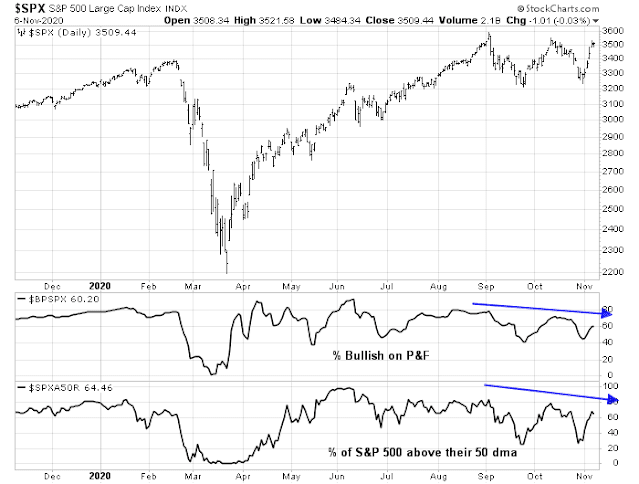 The market experienced an unusual condition last Wednesday, the day after the election. The S&P 500 rose over 2%, but advances were less than declines, and advancing volume lagged declining volume. The blogger Macro Charts pointed out that single-day signs of weakness are not necessarily bearish, but we should watch if market breadth strengthens or weakens in the coming days. 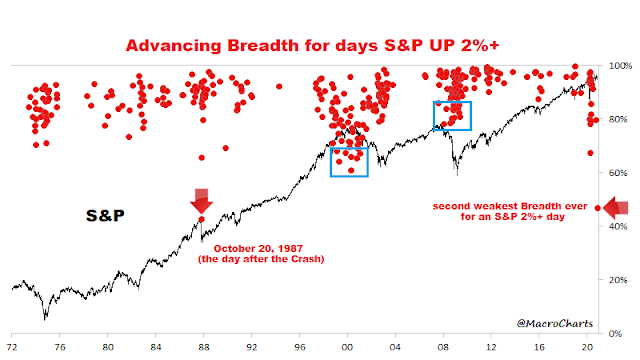 Sentiment models are not helpful in determining market direction. Readings are neutral, and could be supportive of further gains, but there is no rule that states the market has to rise when sentiment is neutral.

The Fear and Greed Index stands at 40 after recovering from a near-oversold condition. Arguably, the combination of neutral sentiment and positive momentum is bullish, but I don’t consider that a high conviction call. 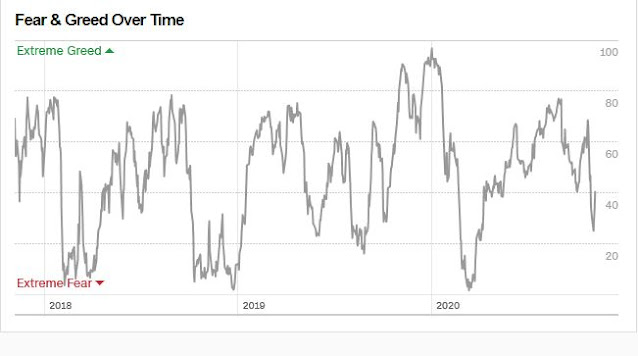 Similarly, II Sentiment is also neutral. The bull-bear spread is falling, and % bulls have retreated from a crowded long condition 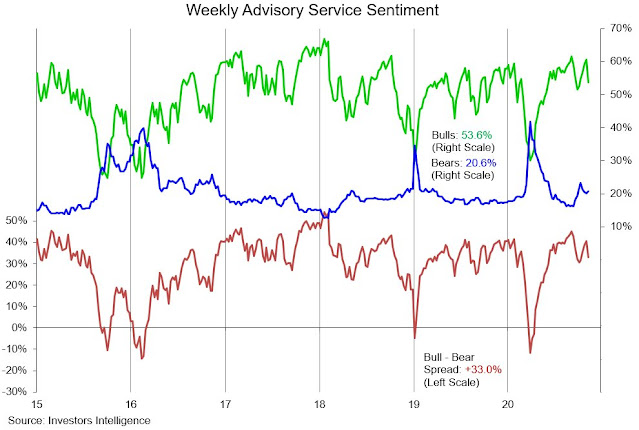 In conclusion, the market is testing resistance and it is on the verge of an upside breakout. If the bulls can show further upside momentum, it could be the signal of a fresh cyclical bull. If the S&P 500 were to stage an upside breakout, the point and figure objective on the weekly chart is 4049. 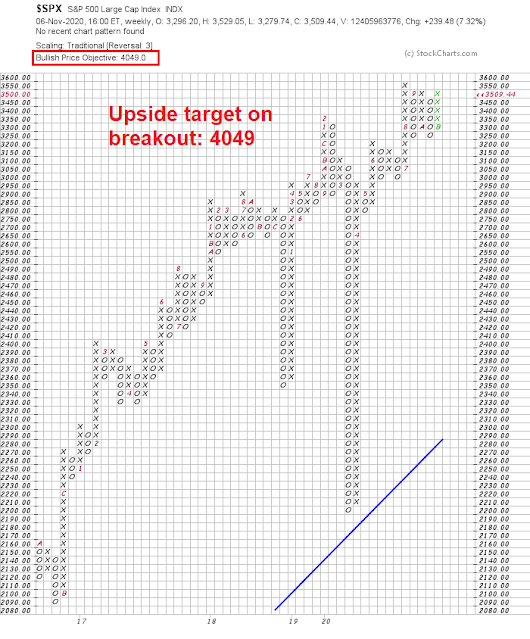 On the other hand, this could be a fake-out, and the bears could defend key resistance levels. The market is short-term overbought, and the advance looks very extended. Keep an open mind in the coming days, and monitor developments, such as the progress of the ZBT Indicator, closely.

My inner investor is still neutrally positioned at the target asset allocation prescribed by investment policy. My inner trader dipped his toe in on the long side on Friday.