Mid-week market update: It is ironic that four weeks ago today, I pointed out that the market missed flashing a rare Zweig Breadth Thrust buy signal by one day (see Trading the breadth thrust). Market breadth, as measured by the ZBT Indicator, has to rise from an oversold level of 0.40 to an overbought reading of 0.615 or more within a 10-day window. Four weeks ago, it achieved that in 11 days, and the rally fizzled sooner afterward.

The ZBT buy signal is extremely rare, and it has occurred only six times since 2004. In all instances, the market has been higher in 12-months, though it “failed” on two occasions inasmuch as it pulled back before roaring ahead to new highs.

I observed on the weekend that we are on the verge of another possible ZBT buy signal (see Zweig Breadth Thrust and triple-top watch). The 10-day window ends today. Alas, the ZBT just failed to flash a buy signal. It topped out yesterday (Tuesday) at 0.606, which was just short of its 0.615 target, and it retreated today.

Despite the setback, all may not be lost. 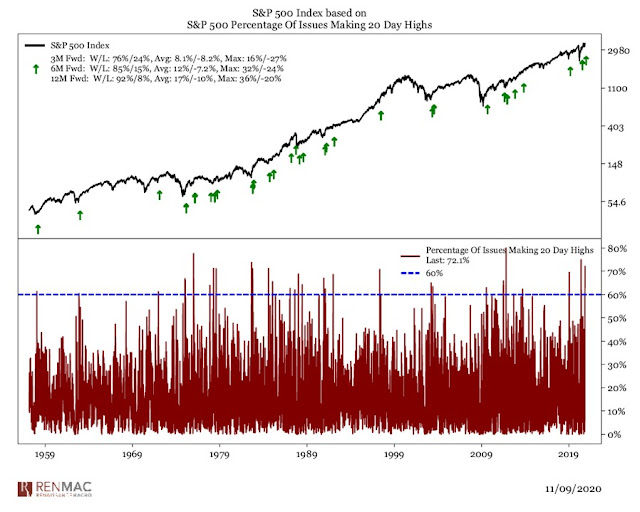 DelWiche calculated the returns from past signals, and the results showed a definite bullish bias.

On the other hand, the market experienced a Whaley Breadth Thrust, which coincided with a short-term top (see Trading the breadth thrust). What should we believe as the market tests upside resistance?

The S&P 500 is struggling with overhead resistance. While I am keeping an open mind, near-term market action is more consistent with a stall than an upside breakout to new highs.

The NASDAQ 100 traced out an outside day on Monday, which is a sign of trend reversal. In addition, its relative uptrend against the S&P 500 was violated, leading to substantial technical damage that needs time to heal. 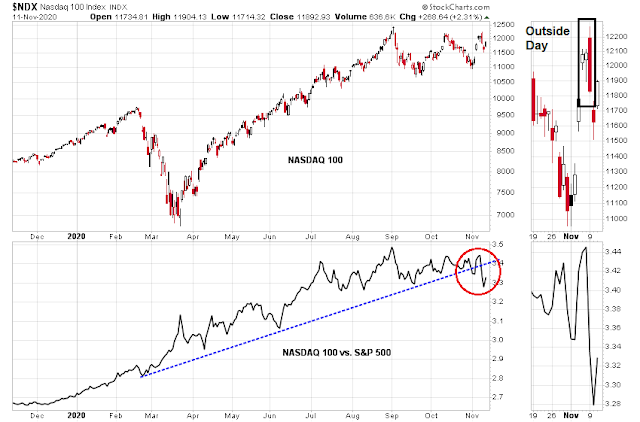 The chart below shows the relative performance of the top 5 sectors in the S&P 500. As Big Tech (technology, communication services, Amazon) comprise 43.4% of S&P 500 weight, it will be difficult for the index to significantly advance without Big Tech participation. 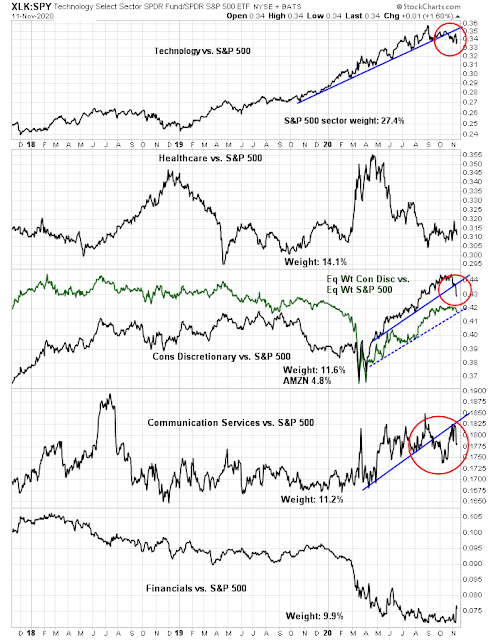