The bears take control, but for how long? – Humble Student of the Markets 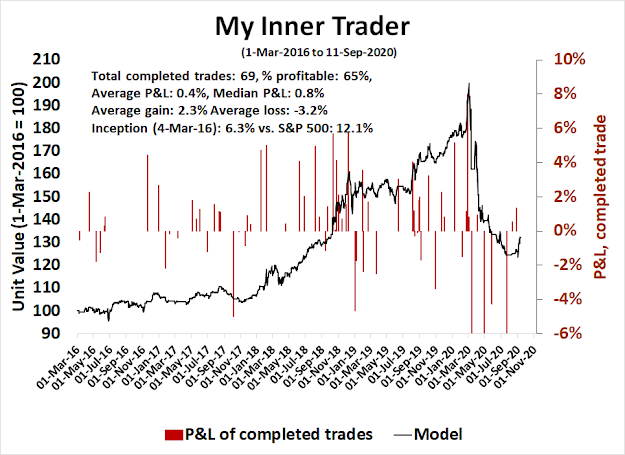 As last week’s market action demonstrated, the bulls just can’t seem to catch a break. Even though the market was short-term oversold, rally attempts have been rather anemic. More worrisome is the behavior of the NASDAQ 100 (NDX), which had been the market leadership. The NDX convincingly breached a rising channel, and it is now testing its 50 day moving average (dma). While its relative uptrend against the S&P 500 remains intact, the relative performance of semiconductor stocks, which had also been a source of technology related market strength, also violated a rising trend line. 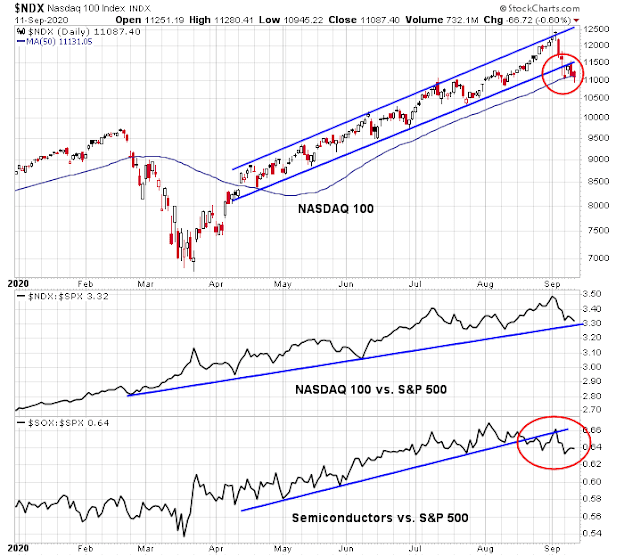 One bullish ray of hope came from Mark Hulbert, who pointed out that newsletter writer sentiment had plunged precipitously, which is contrarian bullish.

Consider the average recommended equity exposure level among a subset of short-term stock-market timers that I monitor on a daily basis. (This is what’s measured by my Hulbert Stock Newsletter Sentiment Index, or HSNSI.) This average currently stands at 30.1%, which means that the average timer now has 70% of his equity trading portfolio out of the market.

Just three weeks, ago, in contrast, the HSNSI stood at 65.9%. As you can see from the chart below, the HSNSI’s recent plunge rivals what happened during the February-March waterfall decline. That’s amazing, since the market’s early September sell-off — scary as it was — is child’s play by comparison. In contrast to a 34% plunge in the earlier downturn, the S&P 500 SPX, +0.05% from Sep. 2 to Sep. 8 lost less than 7%. 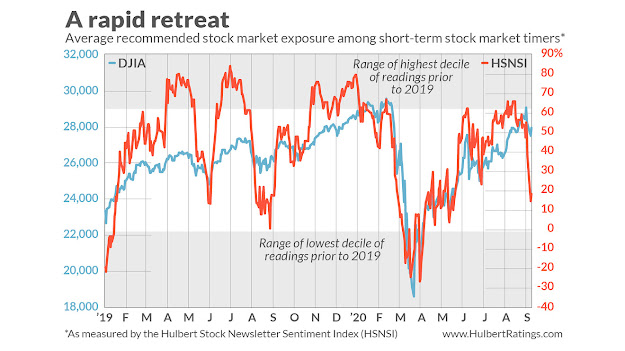 Hulbert concluded, “So long as the market timers on balance remain lukewarm about the stock market, sentiment for the next few weeks favors higher prices.”
Could this be the reprieve that the bullish traders need?

Other indicators begs to differ

Before the bulls get overly excited about Hulbert’s newsletter writer sentiment analysis, I present as this week’s Barron’s as contrarian magazine cover indicator. The cover story characterized the tech bubble as “Not Ready to Pop”, and “…could keep growing, despite recent setback for the stocks”. 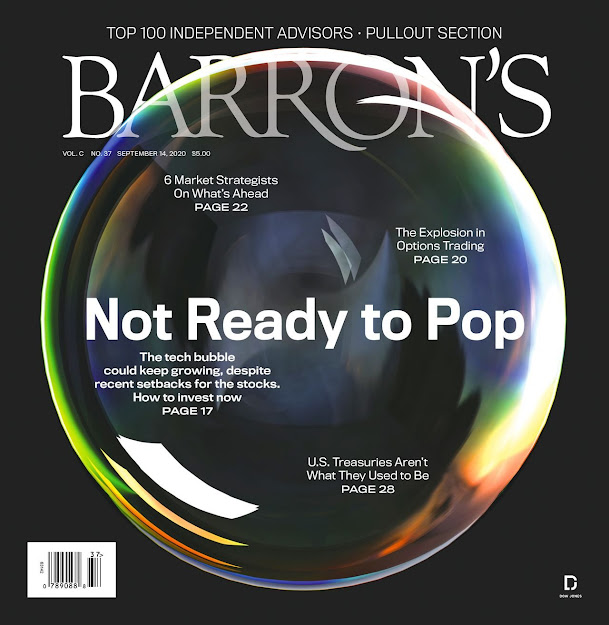 In light of the still elevated levels of the Citigroup Panic-Euphoria Model, and the NASDAQ 100’s technical trend breaks, “Da Nile isn’t just a river in Egypt”. 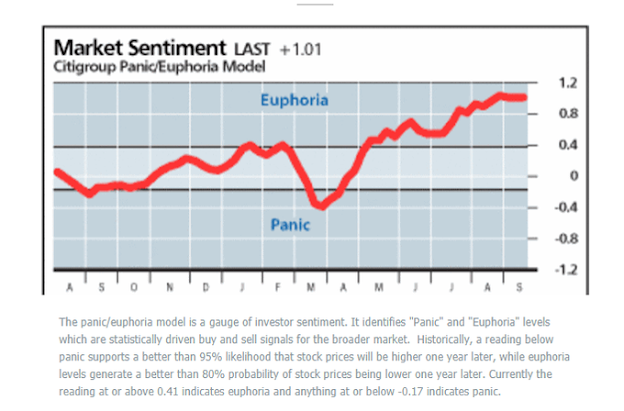 I would also point out that Mark Hulbert warned of a possible long-term market top in a separate Marketwatch article. Hulbert fretted about the wave of M&A activity, which is often the signs of a market top, and blind-trust SPAC financings in particular.

We’re currently in the seventh of those great waves, which began about six years ago. Added Rhodes-Kropf: M&A waves tend to accelerate right before they end. And recent M&A activity does appear to be such an acceleration. “I’m not predicting the end,” he said. “But I wouldn’t be surprised if we’re near the end.”

One of the factors fueling the acceleration of M&A activity are the SPACs that are falling over themselves going public. There are the Special Purpose Acquisition Companies that are otherwise known as “Blank Check Companies.” SPACs have no business operations; they are created solely to raise money that would enable them to acquire other already-existing companies.

The intermediate term technical outlook doesn’t look very constructive either. Both the S&P 500 and NASDAQ 100 experienced outside reversals on their weekly charts in the first week of September. The bearish reversals were confirmed by weakness in the following week. 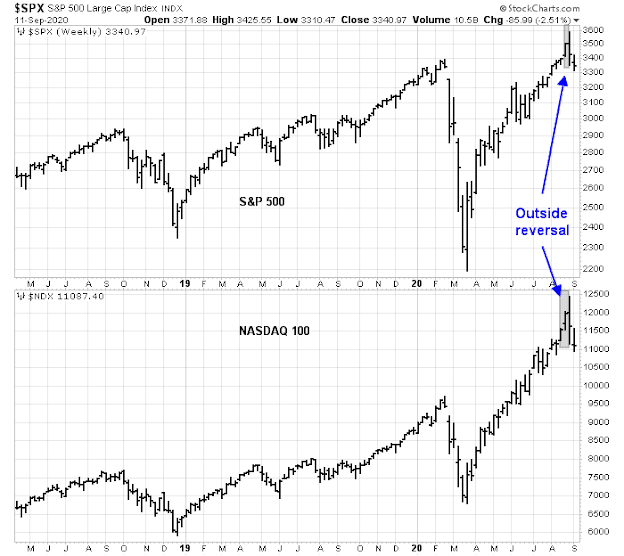 Other indicators suggest that we are nowhere near peak the levels consistent with a panic bottom. Twice in the last week, the equity-only put/call ratio fell, indicating bullishness and complacency, even as the S&P 500 closed near the lows of the day. Capitulation bottoms simply do not act this way. 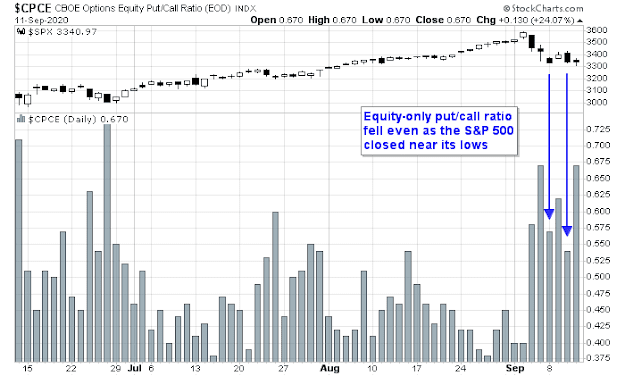 The option positioning indicator from Goldman Sachs also points to a crowded long, which is contrarian bearish. 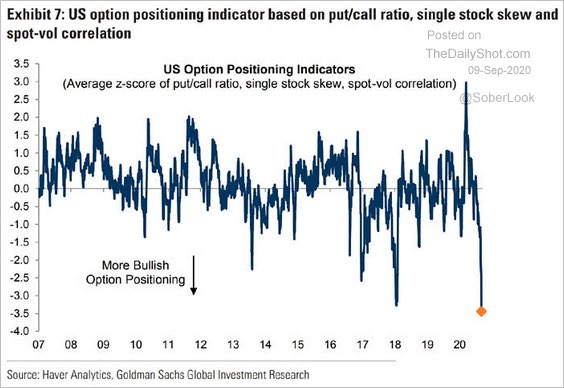 Another key component of my Trifecta Bottom Spotting Model, namely the term structure of the VIX, is not even inverted indicating a lack of fear. While TRIN did spike above 2 on Thursday as a sign of panic selling, the intermediate term overbought/oversold model has not reached the deeply oversold conditions consistent with an intermediate bottom. In the past, two or more of the components of this model needed to flash simultaneously buy signals before the market can see a durable trading bottom. 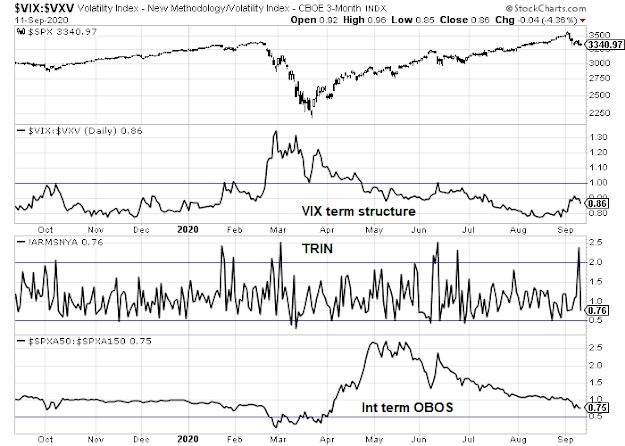 The Zweig Breadth Thrust Indicator is also not even flashing an oversold signal. I use this indicator in two ways, traditionally as a long-term buy signal, and as a short-term oversold indicator. A long-term ZBT buy signal is triggered with the ZBT Indicator falls below 0.40 to become oversold, and rebounds above 0.40 to an overbought condition at 0.615 within 10 trading days. While ZBT buy signals are extremely rare, ZBT oversold conditions are not. The following chart shows the actual ZBT Indicator, which is reported with a lag by StockCharts, and my own real-time estimate of the indicator. Neither is showing an oversold condition indicative of a short-term bottom. 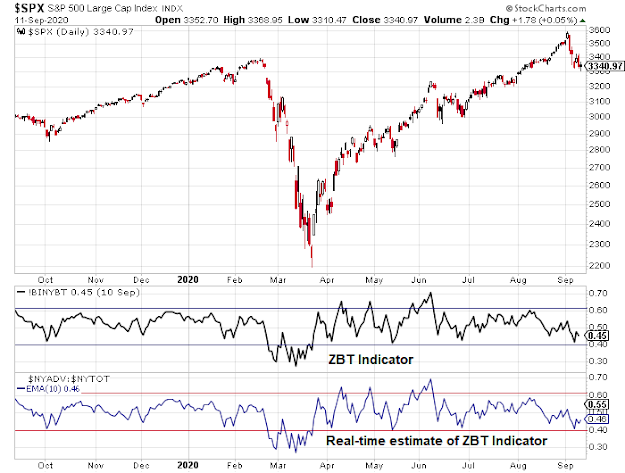 Looking to the week ahead, the market faces a crucial test. Both the S&P 500 and NASDAQ 100 have violated key rising trend lines, and they are both testing 50 dma support levels. As well, the FOMC meeting next week could also be a source of volatility. Apple’s new product event scheduled for September 15 could also provide some market fireworks. 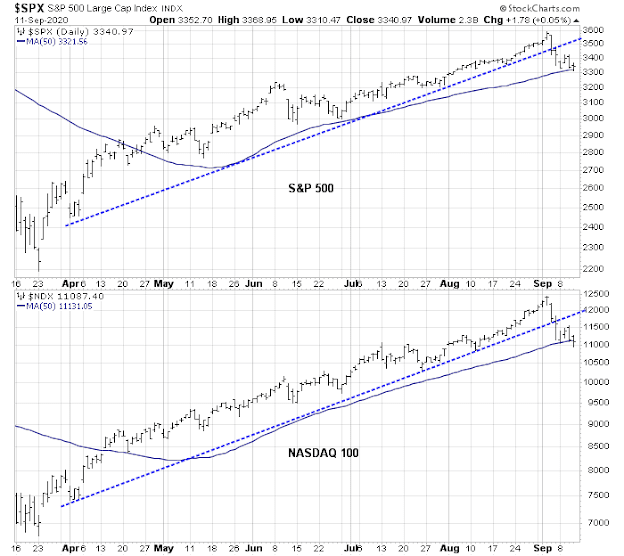 Short-term momentum is recovering from an oversold reading, but the bulls have been unable to muster much in the way of relief rallies even given the chance. 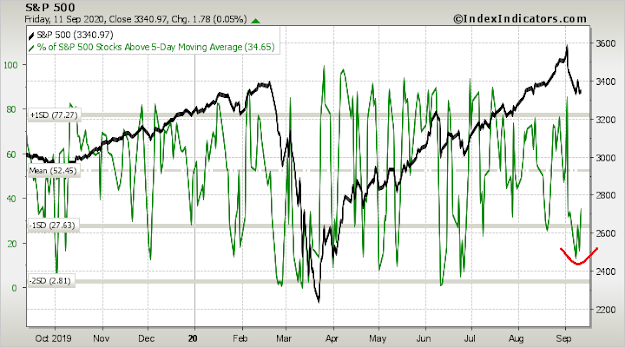 The market can stage a short-term relief market at any time. However, the intermediate term path of least resistance is still down.
Disclosure: Long SPXU

35 thoughts on “The bears take control, but for how long?”