Risk and reward: No guts, no glory? – Humble Student of the Markets

Risk takers are fond of the line, “No guts, no glory”. With that in mind, I present three cases of risks, and possible opportunities.

The Turkey in the FX coalmine

In late June, I highlighted analysis from Research Affiliates of country values by CAPE relative to their own history. At the top of the most attractive list was Turkey, followed by Malaysia, Poland, South Korea, and Thailand (see A bleak decade for US equities). Turkish equities represents a classic Rorschach inkblot test of risk and opportunity for investors. 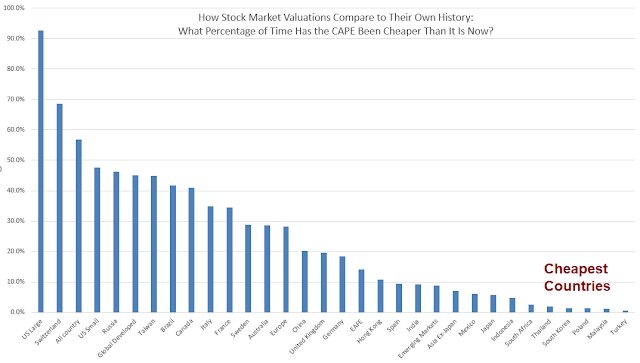 While Turkish stocks are cheap on a statistical basis, they are not without risk. The Turkish lira (TRY) is under severe pressure because of a falling current account. Bloomberg summarized TRY’s challenges:

The Turkish lira is weakening to all-time lows, and that’s even before the USD has shown any signs of strength as greenback positioning is at a crowded short.

The Big Mac Index from the Economist shows the TRY to be considerably undervalued against the USD. However, currencies can take years, and even decades to converge to purchasing power parity. 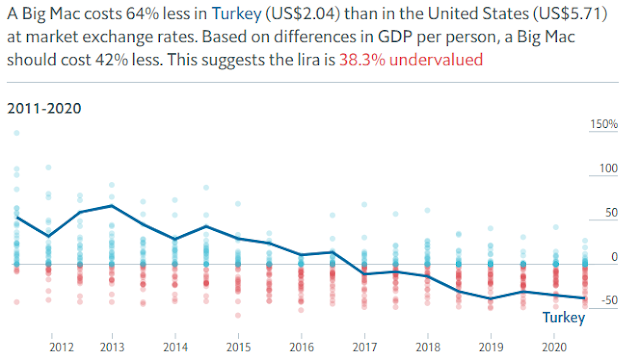 In the short run, rising geopolitical tensions in the Eastern Mediterranean will not help sentiment. Turkey recently dispatched an exploration ship with a naval escort to disputed waters off the southwest coast of Cyprus, This is provoking a possible confrontation with the Greek and French navy, which is raising the temperature with EU relations and causing fractures within NATO. The Eastern Mediterranean has significant natural gas potential. Cyprus, Israel, Egypt, and now Turkey are trying to secure shares of the resource. 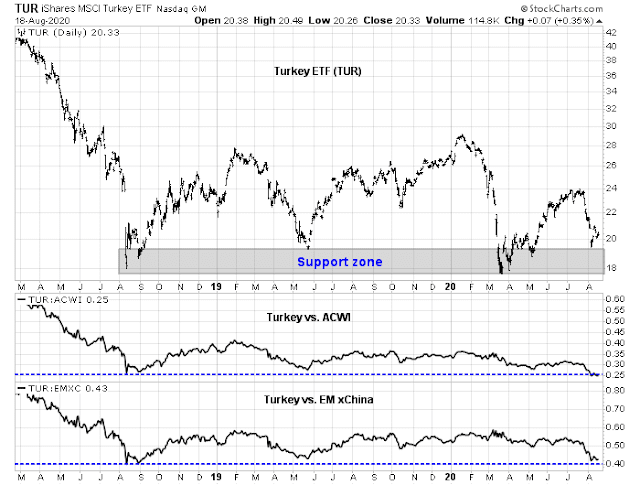 On a relative basis, Turkish equities looks washed out and presents a contrarian opportunity for investors. On the other hand, SentimenTrader pointed out that USD positioning is at a crowded short. The TRY exchange rate is at severe risk should the USD ever strengthens. 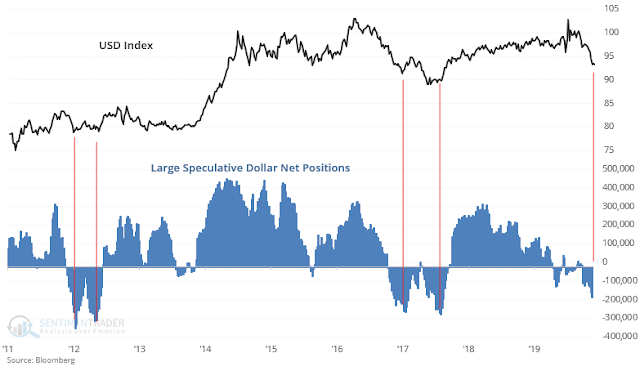 No guts, no glory?

In the US, the recent dispute over the Post Service highlights the rising risk of electoral chaos. Ian Bremmer and Cliff Kupchan of the Eurasia Group characterized this political risk as “American Brexit”.

In January, risk #1 described how US institutions would be tested as never before, and how the November election would produce a result many would see as illegitimate. If President Donald Trump won amid credible charges of irregularities, the results would be contested. If he lost, particularly if the vote was close, same. Either scenario would create months of lawsuits and a political vacuum, but unlike the contested George W. Bush-Al Gore election of 2000, the loser was unlikely to accept a court-decided outcome as legitimate. It was a US version of Brexit, where the issue wasn’t the outcome but political uncertainty about what people had voted for.

Meaningful (France-style) social discontent becomes more likely in that environment, as does domestic, politically inspired violence. Also, a non-functioning Congress, with both sides using their positions to maximize political pressure on the eventual election outcome, setting aside the legislative agenda. That becomes a bigger problem if the US is entering an economic downturn, on the back of expanded spending and other measures to juice the economy in the run-up to the election.

How would the markets behave under an “American Brexit” scenario? Let’s consider how the markets reacted after the Brexit vote surprise in 2016. The chart below depicts the FTSE 100, which consists mainly of UK large cap global companies, and the FTSE 250, which are small companies that are more exposed to the local economy. As ways of measuring a “pure” Brexit market effect, I also show the relative performance of the FTSE 250 to FTSE 100, the performance of UK large caps to ACWI, and the performance of UK small caps to ACWI. The markets rallied into the Brexit vote, thinking that the Remain side would win but fell dramatically after the unexpected result. Once we normalize the relative prices before and after the vote, downside risk varied from -4% to -14%, depending on the metric used. 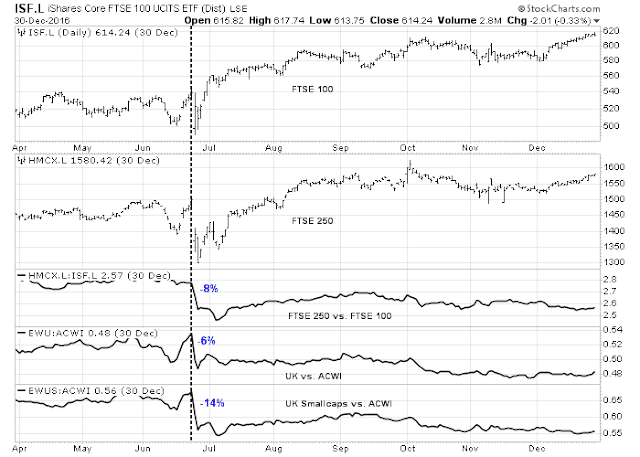 This is a key risk for the US equity market. I have not seen any Wall Street strategists discuss the possibility of electoral chaos after November. Based on the Brexit event study, expect a similar range of downside risk of -4% to -14% in during the November to February period.

Speaking of Brexit, the region has been the most hated in the BoA Global Fund Manager Survey for some time. 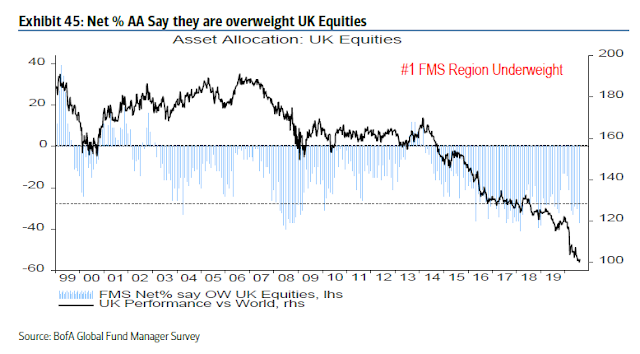 I know that the details of Britain’s divorce from the EU are not finalized yet, but UK equities look washed out and unloved. But the ratio of the FTSE 250 to FTSE 100 has been rising steadily before the COVID Crash, and it has been recovering steadily since the March low. From a global perspective, while UK large caps (EWU) continue to lag ACWI, UK small caps (EWUS) have been range bound, which is a more constructive pattern.I interpret these readings as the market has largely discounted Brexit risks, and there may be opportunity for superior performance in UK small caps, which are more exposed to the British economy. 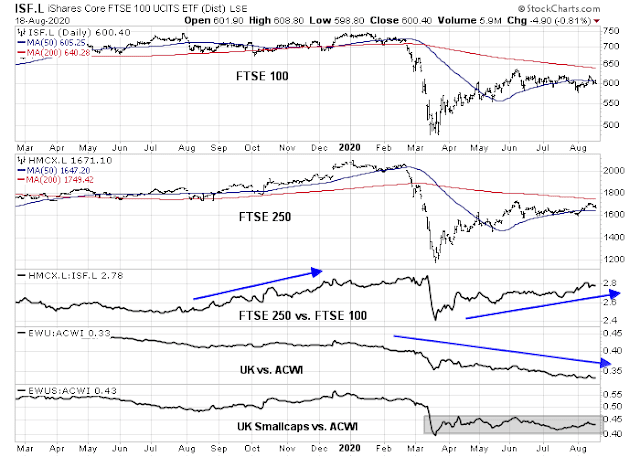 One long-term bullish factor for the UK that few talk about is Prime Minister Boris Johnson’s decision to open the citizenship doors to Hong Kong residents with British National (Overseas) passports. This has the potential to inject the country with a group of English speaking, well-educated immigrants that could boost growth potential.

No guts, no glory.