What really matters in this market – Humble Student of the Markets 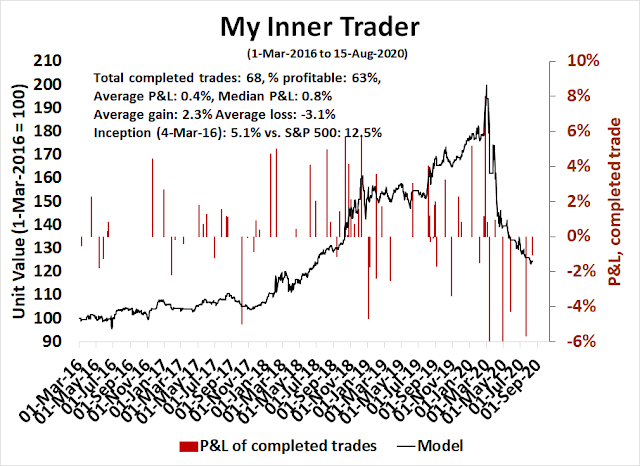 As well, credit market risk appetite, as measured by the relative performance of high yield (junk) bonds and leveraged loans to their duration equivalent Treasuries, are also not buying into the equity risk-on narrative.

The divergence between the VIX Index and the TED spread, which is one of the credit market’s indication of risk appetite, is another worrisome sign.

In the short run, none of this matters. Here is what traders should really be paying attention to.

I wrote about how Big Tech stocks are dominating market action (see A Potemkin Village market?). Indeed, the Big Tech sectors (technology, communication services, and consumer discretionary/Amazon) comprise roughly half of S&P 500 index weight. It would be virtually impossible for the market to move without the significant participation of these top sectors. So far, technology has been in a well-defined relative uptrend, consumer discretionary stocks have been strong on a relative basis, and communication services relative strength has been moving up in a choppy pattern. 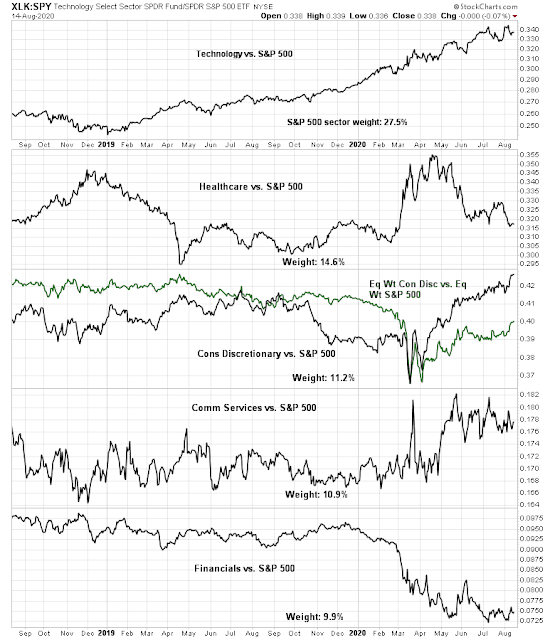 The NASDAQ 100 remains in an uptrend, though breadth indicators are sounding negative divergence warnings. Until the NASDAQ 100 breaks its trend line, it would be premature to turn bearish despite the widespread warnings. 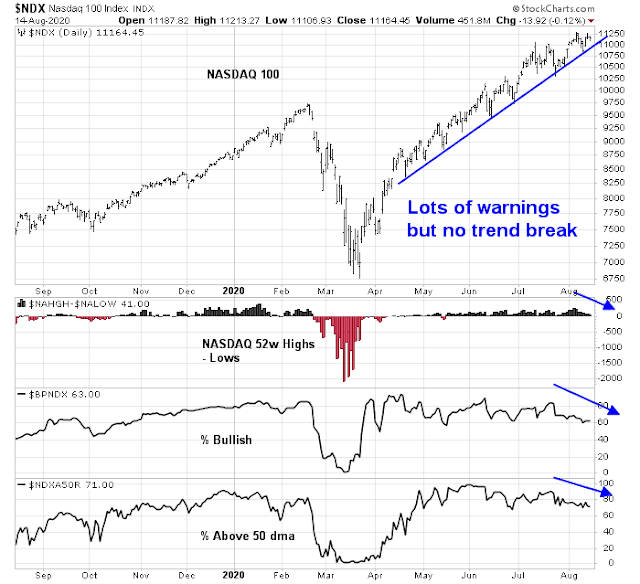 There are also warnings from a top-down macro perspective. Disposable income had been held up in this recession by fiscal support.

The expiry of the $600 per week supplemental unemployment insurance at the end of July has caused UI outlays from Treasury to fall off a cliff. Undoubtedly that will show up in falling confidence and retail sales in the near future. 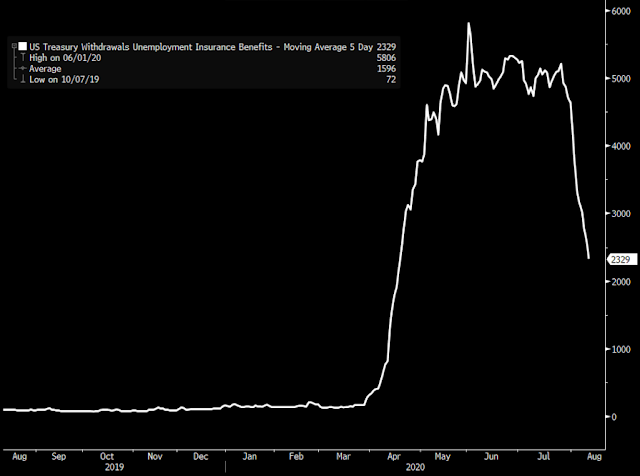 Banks are responding predictably by tightening credit standards. We have the makings of an old-fashioned credit crunch, which will crater economic growth in the absence of further significant fiscal and monetary policy support. 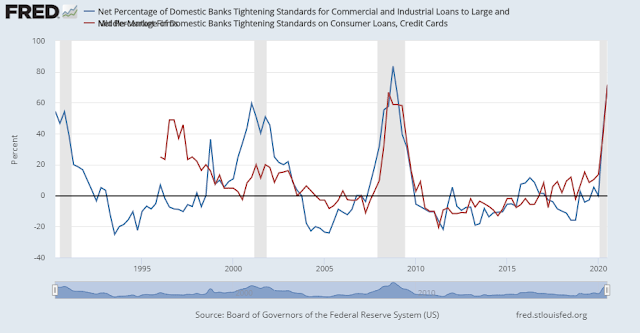 The narrative for the economy is turning from bounce back rebound to a stall. Historically, the stock market has encountered headwinds when growth expectations disappoint, as measured by the Citi Economic Surprise Index (ESI). 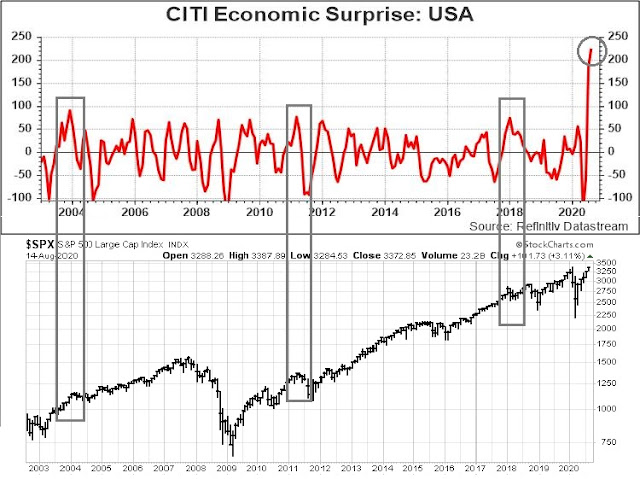 Here is a close-up look at ESI, which is showing signs of topping out.

This trend of stalling ESI is evident globally. Here is Eurozone ESI. 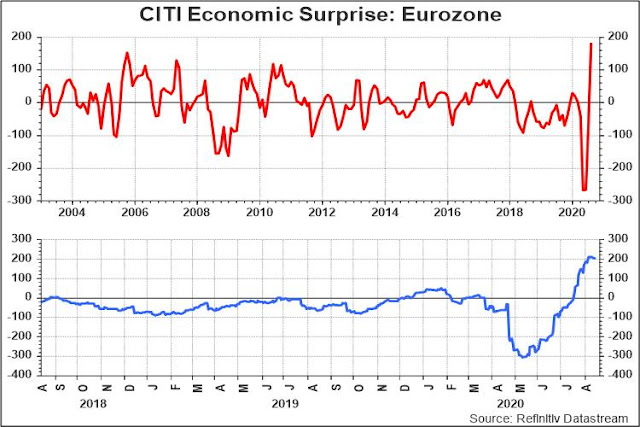 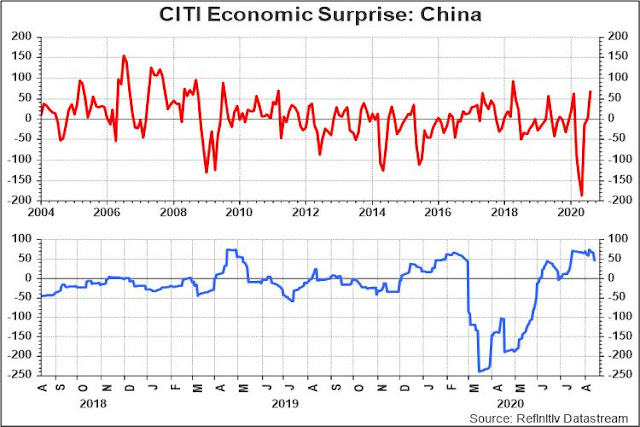 Pennies in front of a steamroller

In the short run, none of this matters until the major market indices, and the NASDAQ 100 in particular, experience breaks to the rising trend lines. Short term momentum remains positive as the percentage of stocks in the S&P 500 above their 5 dma is exhibiting a series of higher lows. 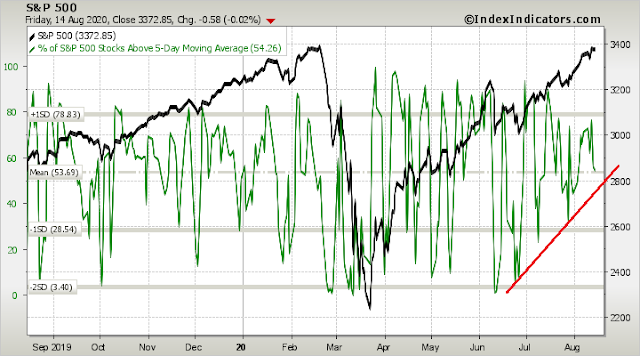 A similar pattern can be found for the NASDAQ 100. 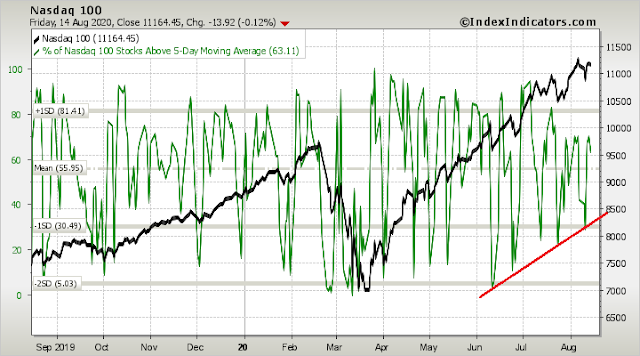 In conclusion, the negative divergence concerns that I raised in the past few weeks are still valid. However, nothing matters until we see trend line breaks, especially in the NASDAQ. Traders could try to buy dips in this environment. However, intermediate term downside risk is considerable, and buying here would be akin to picking up pennies in front of a steamroller.

37 thoughts on “What really matters in this market”