Mid-week market update: As the market tests resistance at the old highs, is sentiment greedy enough? The Fear and Greed Index stands at 73, and recently peaked at 75. While readings at these levels can indicate high risk environments, they have also been inexact market timing signals. 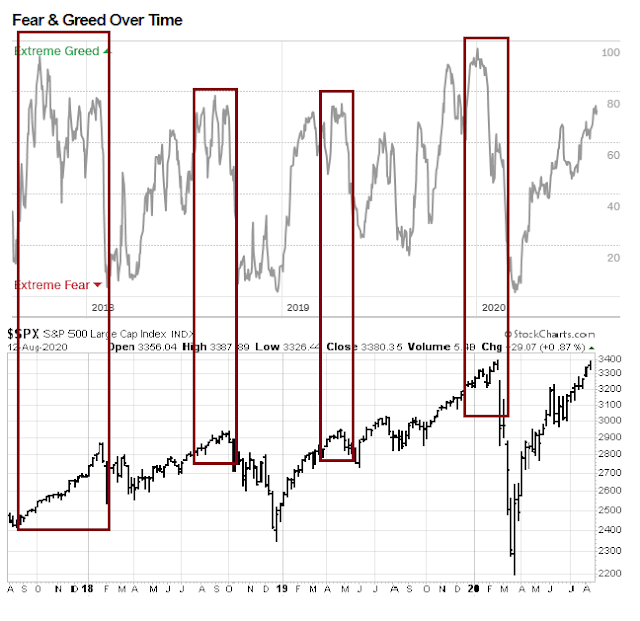 Andrew Thrasher pointed out that VIX sentiment has fallen below 10%, which is bullish for volatility and bearish for equities. 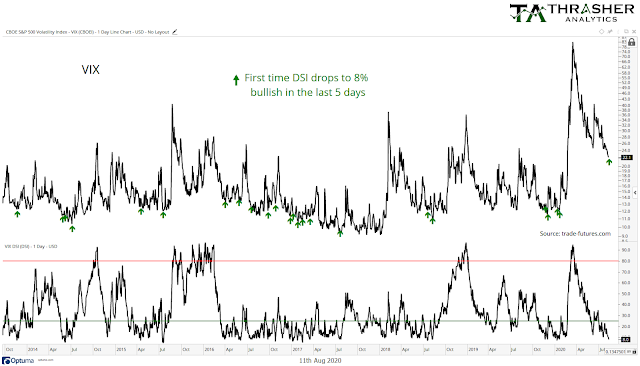 Hedge fund positioning is another matter. A recent survey of JPM and GS prime brokers that act as HF custodians reveals that the fast money crowd has gone all-in on risk. 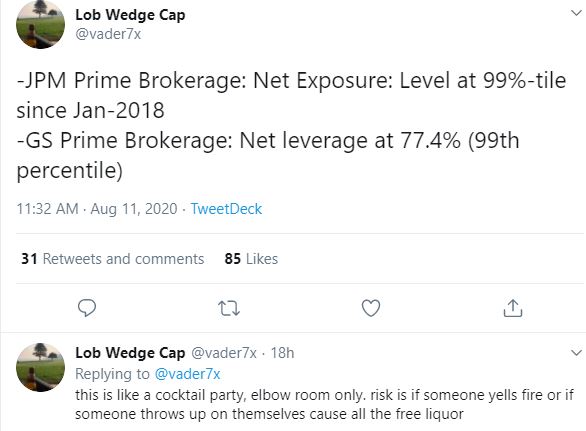 Speculative retail positioning, as measured by leveraged ETFs, is bullish. However, readings may not be extreme enough to be described as a crowded long (via Callum Thomas). 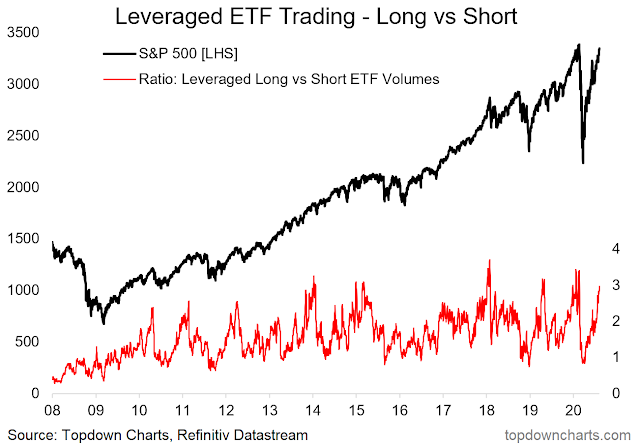 Does that mean that stocks are about to experience a risk-off episode?

A door closes, others opens

Not necessarily. I have been warning about a bearish setup for several weeks, but I was not ready to act until we saw some risk-off triggers. I had identified three tripwires to monitor. The first was the Treasury market, whose prices broke up in an inverse head and shoulders pattern, and whose yields broke down in a head and shoulders formation.

Time to turn bearish? Bond prices and yields dramatically reversed themselves yesterday, and the reversal continues today. From a technical perspective, there is nothing worse than a failed breakout or breakdown. 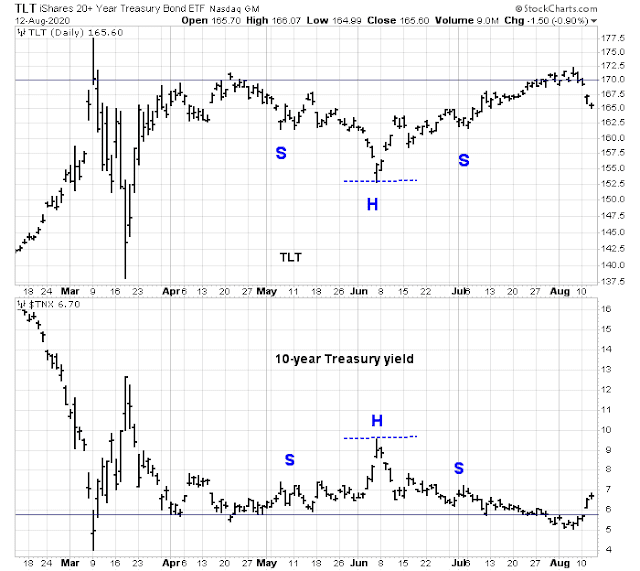 As the Treasury bond market closed, another opened. I had been monitoring the parabolic move in gold and silver prices. In the past, reversals in silver after a parabolic surge have not been equity friendly. We began to see a major reversal in precious metal prices yesterday.

Here is a close-up look at gold and silver. It’s impossible to know the magnitude of the stock market weakness ahead of them. In the past, some reversals have resolved themselves in minor stock market hiccups, others in major pullbacks. 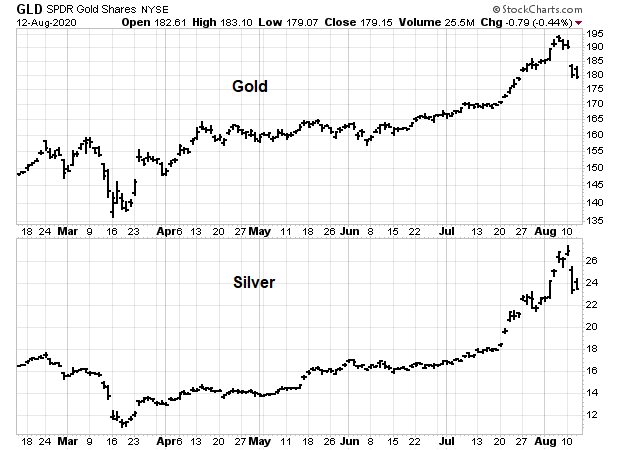 The third and final bearish tripwires is a reversal of USD weakness. USD positioning is screaming “crowded short”, and we just need some sort of catalyst to push it upwards. 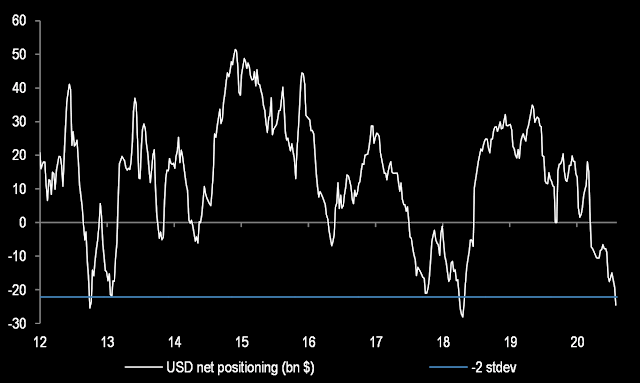 USD strength will create stress in the offshore dollar market, which negatively affects vulnerable EM economies and global risk appetite. The USD Index appears to have formed a double bottom and it is trying to rally. EM currencies are starting to show signs of weakness, which is not a good sign for equity prices. 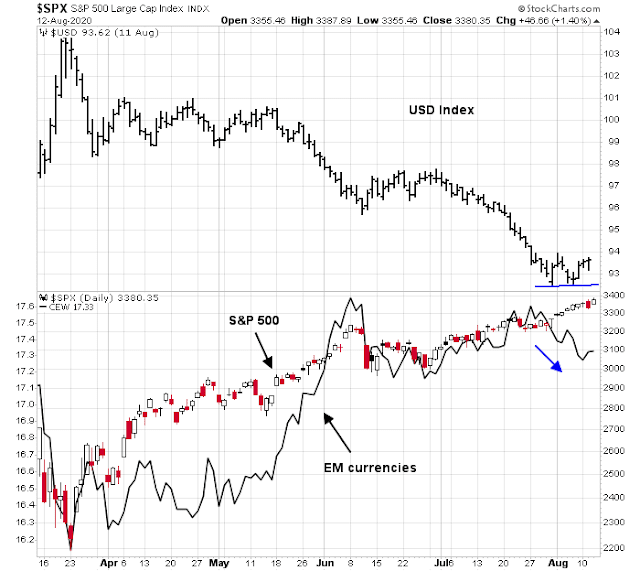 Cautious but not bearish

Does this mean that traders should turn bearish? Not necessarily. Price momentum remains strong. Rob Hanna at Quantifiable Edges documented what happens when the DJIA experiences a seven-day consecutive win streak, which it did until yesterday. While short-term returns can be volatile, returns over a one month time horizon have a bullish tilt. 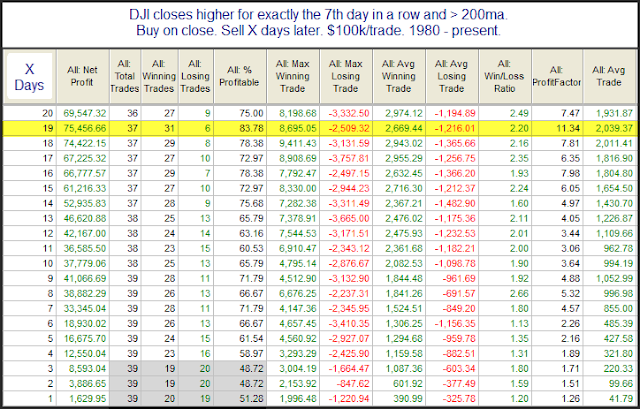 Despite the intermediate term warnings, traders have to be open to the possibility that the market is advancing on a series of “good overbought” readings. 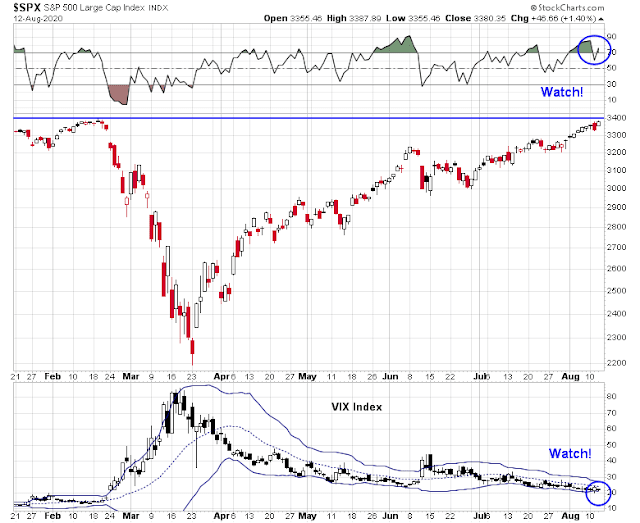 If the market were to undergo a period of weakness, traders should await tactical bearish triggers before making a commitment to the short side. Triggers include a recycle of the 5-day RSI from overbought territory to neutral, as it has already flashed a negative divergence signal. As well, watch for a breach of the lower Bollinger Band by the VIX Index as an indication of an extreme overbought condition.

My inner investor is nervous, but holding at a neutral asset allocation. My inner trader can best be described as cautious, but not bearish (yet).