Earnings Monitor: Slower growth ahead – Humble Student of the Markets

The bottom-up consensus forward 12-month estimate continued to rise strongly at 1.62% last week after 1.03% the previous week The market is trading at a forward P/E of 22.3, which is well ahead of historical norms. 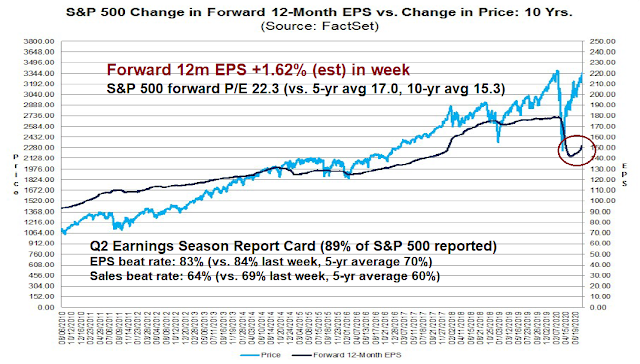 As 89% of the index has reported, this will be the final Earnings Monitor of Q2 earnings season.

The Street continues to be upbeat on the outlook of individual companies. Though the weekly changes in quarterly EPS estimates can be noisy, analysts have upgraded quarterly earnings estimates across the board, except for Q4 2020. 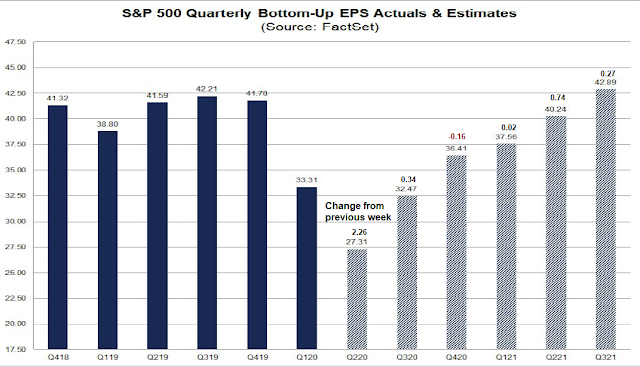 The Transcript reported that companies have adopted a cautious tone in their earnings calls:

Many companies and individuals have been hard hit by the pandemic and are having a tough time. All eyes are on another stimulus package to try to cushion them. Worryingly, cases are rising worldwide even in areas that were thought to have contained the virus. The picture from July and early August is one of a mixed and uneven recovery.

Here is a brief summary of the macro outlook:

The story of Q2 earnings season has been a rapid climb in earnings and outlook, but the economy appears to be transitioning to a period of slower growth. The July Jobs Report was revealing in many ways. Even though some of the dire forecasts of negative jobs growth was averted and job growth came in at 1.8 million, which was slightly ahead of expectations, the trajectory of growth is slowing. Even though the unemployment rate fell, the unemployment rate for workers unemployed for 15 weeks or more continued to climb. This is an indication of a rising long-term unemployment problem. 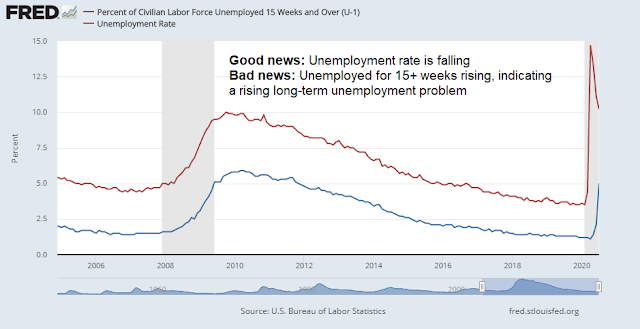 Notwithstanding the slight Nonfarm Payroll beat, high frequency data is pointing to a pattern of stalling growth. As an example, new online job postings are pulling back after a period of rapid recovery. 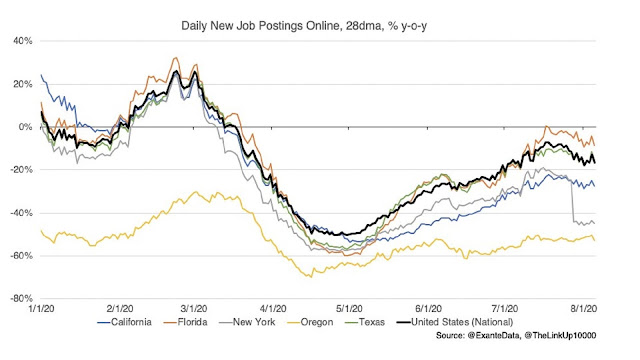 Trump tries to take the helm

The impasse in Washington over CARES Act 2.0 is not helping matters. Ironically, the constructive nature of the July Jobs report provided reasoning for Republican budget hawks in the Senate to resist pressures for additional stimulus. While there has been some discussion, the Democrats and Republicans are far apart on a number of major issues.

President Trump stepped in on Saturday and signed orders to try and break the logjam. He spoke at a signing ceremony at his Bedminster golf course, “We’re going to be signing some bills in a little while that are going to be very important, and will take care of, pretty much, this entire situation”.

However, his actions are problematical and they are reminiscent of the travel ban Executive Orders (EOs) when he first took office. Those EOs were challenged in court and it took several revisions before they could be implemented. Similarly, the some of the latest initiatives are subject to constitutional challenge, and others represent more glitz than substance.

Trump signed one EO and three Memoranda to extend the eviction moratorium; extend the supplemental weekly unemployment insurance support, which was reduced from $600 to $400 per month; defer the collection of the payroll tax; and to extend student loan relief. Let’s examine them one at a time.

Here is the Executive Order relating to evictions. Despite Trump’s announcement that he is extending the eviction moratorium, the EO is nothing of the sort. It directed various federal agencies to find ways to halt evictions, which is distinctly different from an eviction moratorium [emphasis added].

Eviction and homelessness is becoming a looming problem. An estimated 27% of Americans missed July rent payments. Of those, 39% were not confident they would be able to make their August payments. 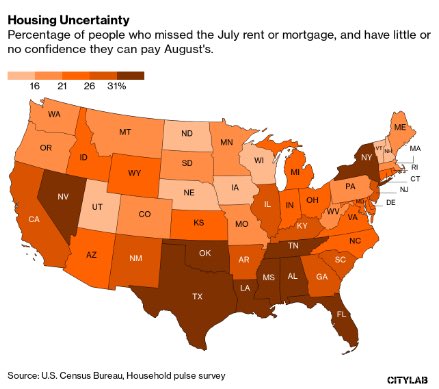 More crucial to the growth outlook, here is the Memorandum to extend the supplemental unemployment insurance payments by $400 per week, down from the now expired $600 per week. The Trump Administration “declared an emergency” and raided the FEMA budget of $50 billion to pay for the extension. The measures were problematical in a number of way. First, state governors cannot pay the extra unemployment insurance without spending authorization from Congress, which the Memorandum does not. As well, under the law that governs FEMA, if the federal government declares a disaster, the state will have to request aid and pay 25% of the cost. It is unclear how many states would actually implement such a measure, and many states do not have the budget for the extra $100 per week. Even Ohio’s Republican governor Mike DeWine has expressed doubts about whether his state could participate in the program.

If this measure is fully implemented, the $50 billion would be used up in 4-5 weeks. For some perspective on the economic effects, of this measure, former Treasury official Ernie Tedeschi estimated that a $300 per week UI relief would reduce employment by 800,000 by year-end and GDP by -1%. A full expiration of $600 weekly support would reduce unemployment by 1.7 million and GDP by -2%. At best, the implementation of this measure will be highly uneven, and will depend on the legal interpretation and budget constraints at the state level.

In addition, the 2020 hurricane season is expected to be more severe than average, and FEMA would be left without a budget for disaster relief. This measure is likely to spark a constitutional crisis, as Congress is the only arm of government authorized to spend and tax. The President has no authority to extend the payment of unemployment benefits.

The Memorandum on payroll tax deferral is equally problematical. It directs the IRS to temporarily suspend the collection of payroll taxes until December. It is not a tax holiday. Trump has promised to forgive all of the suspended payroll taxes owing if he is reelected. This measure presents a quandary for employers. Since this is only a tax deferral, do they continue to deduct payroll taxes from employees until December? The prudent course of action would be to put these deferred taxes into a separate account until they are payable. In that case, there is no stimulus effect. If the employer does not deduct the payroll tax, he may be put into a position of trying to claw back the taxes from employees and former employees in the future. The hope of the policy is the employer either does not collect the tax, or does collect the tax and uses the funds for other purposes. But that course of action creates many legal uncertainties for both employers and employees.

As payroll taxes are used to fund Social Security and Medicare, Joe Biden was quick to jump on Trump’s measure as “defunding Medicare”. Undoubtedly, this will spark a healthcare funding debate in the coming days. In addition, this measure is also subject to a constitutional court challenge, as it is Congress that has taxing authority.

Of all the measures, the Memorandum on student loan relief has the least problems. The Secretary of Education does have the authority to defer student loan payments in hardship cases.

In summary, these measures are not well-written, and they are highly reminiscent of the ill-fated travel bans early in Trump’s term. Nebraska Republican Senator Ben Sasse called them “constitutional slop”. Despite Trump’s efforts to take the helm, at best these efforts will cause confusion over their implementation. At worst they will be mired in court challenges. In all cases, their economic effects will be minuscule compared to the proposals tabled by either the Senate Republicans, or by the Democrats. For an idea of the difference in scale, the $50 billion from FEMA to fund more unemployment insurance relief, even if fully implemented, is dwarfed by the sized of Republican $1 trillion relief bill, and the over $3 trillion HEROS Act passed by House Democrats. Moreover, Trump runs the risk of politically “owning” the coming slowdown with these half-measures ahead of the election.

In conclusion, Q2 earnings season has been upbeat, and Street analysts are busy raising their earnings estimates. However, the economy is likely to undergo a phase of slower growth. The CARE Act 2.0 impasse is exacerbating the effects of the slowdown, and could bring the economy to a dead stop. Wall Street has not recognized those risks, and estimate revisions are poised to lurch downwards.