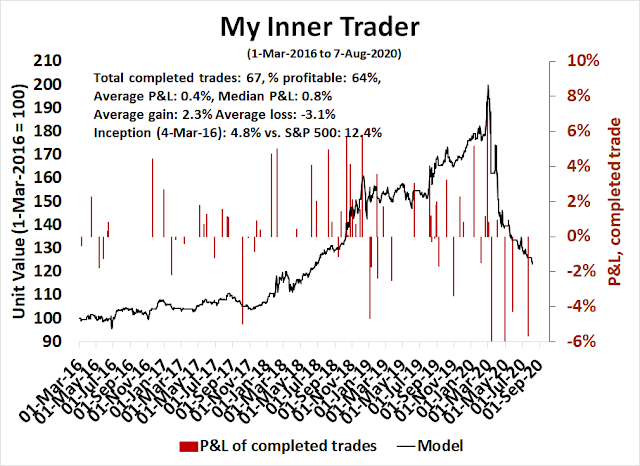 I wrote a week ago that I had an uneasy feeling about the stock market’s intermediate term outlook. This was owing to a combination of global market weakness, and cross-asset warning signals. Last week, US equities continued to grind upwards. Let’s review how those signals evolved.

Starting with the US, the SPX broke up through a rising trend line to a new recovery high. Internals were mixed. While Advance-Decline Lines staged upside breakouts to all-time highs, the ratio of high beta to low volatility stocks, which is a risk appetite indicator was range-bound and did not confirm the market’s strength. Neither the the NYSE Advance-Decline Volume (bottom panel). 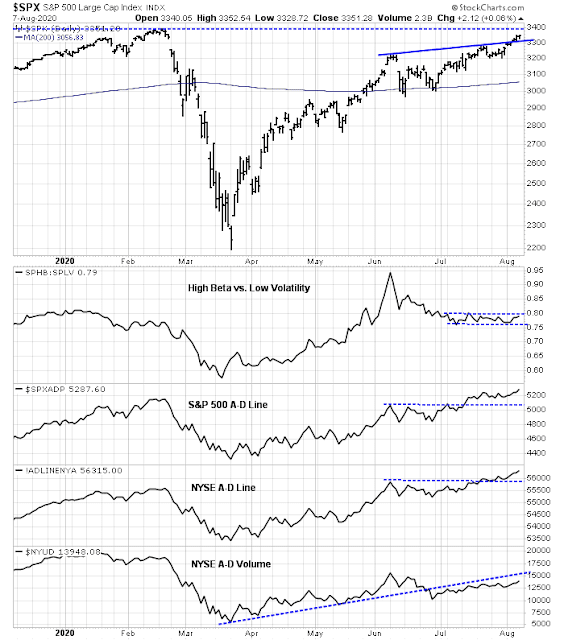 The NASDAQ 100, which had been the market leaders, broke out through resistance to a new all-time high, and the breakout held despite a pullback late in the week. 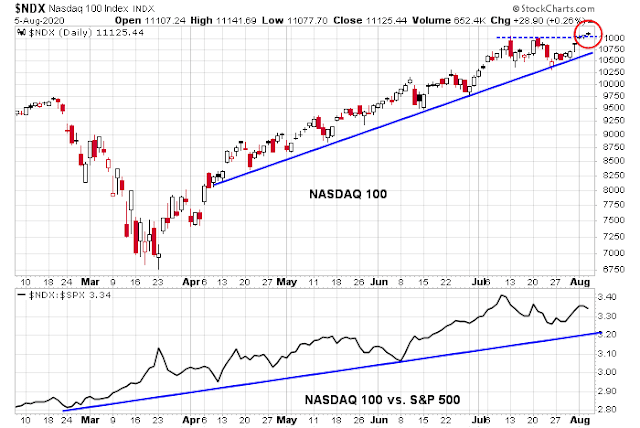 It is unclear how much good news and bad news is in the market. President Trump’s announcement on Saturday that he would sign an Executive Order and several Memorandums to extend supplemental unemployment insurance payments at the rate of $400 per week, down from $600 per week, suspend the collection of payroll taxes, defer student loan payments, and extend the federal moratorium on evictions. CFD futures, which is admittedly thin and prices are only indicative, did not react to the news.

The action in overseas markets was not as bullish. European markets (all indices are measured in local currency) pulled back and were unable to recover above their 50 day moving averages (dma). All were below their 200 dma. 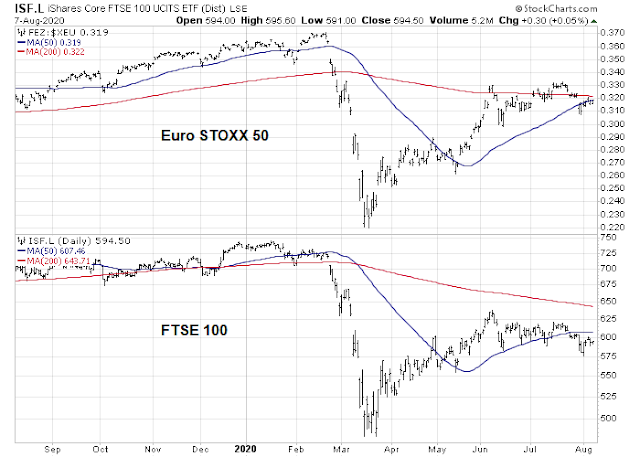 Turning to Asia, Japan’s Nikkei Index was also unable to rally much, and ended the week below its 50 and 200 dma.

The technical condition of the Chinese market and the markets of China’s major Asian trading partners were mixed. Shanghai was never able to recover and break out above resistance after an initial surge and pullback. The Hong Kong market weakened below its 50 dma. Taiwan and South Korea were strong, but that’s mainly attributable to the leadership of semiconductor stocks. Singapore and Australia remain regional laggards. 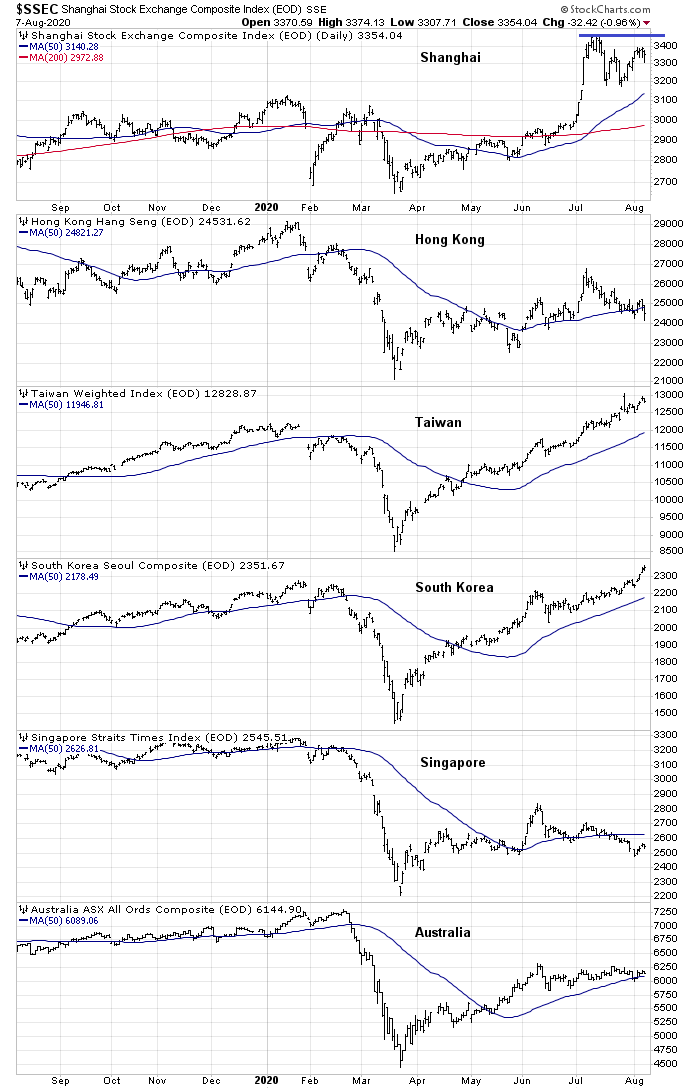 What about commodity prices? They are important barometers of the global cycle, and Chinese demand as China has been an voracious consumer of commodities. The CRB Index has been rising steadily, but it remains caught between its 50 and 200 dma despite the recent stellar performance of precious metals. 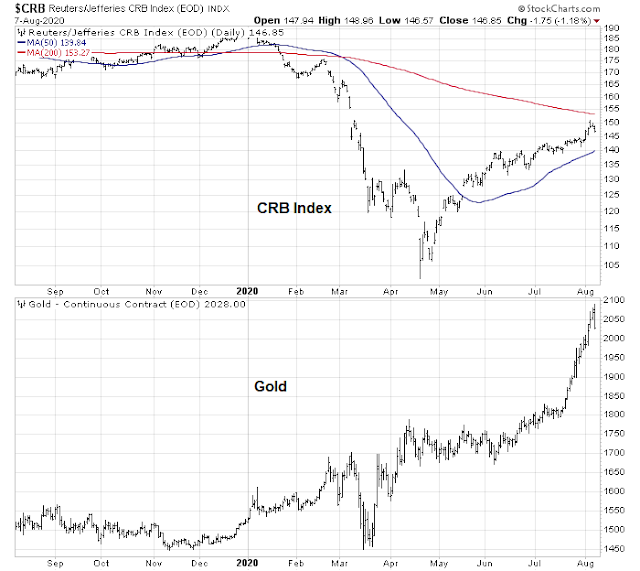 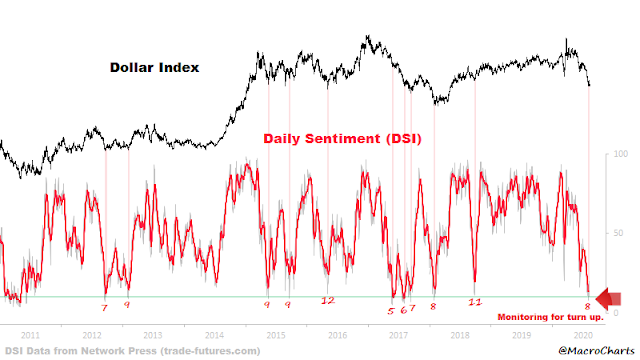 I previously identified a USD reversal as one of my equity bearish tripwires. Not only is a rising dollar bearish for commodity prices, it’s also puts pressure on vulnerable EM economies that are dependent on USD financing. There are two worrisome signs from a technical perspective. The USD may be in the process of tracing out a double bottom. A greater concern are EM currencies, which are weakening even as the USD fell. This is a negative divergence that investors should keep an eye on. 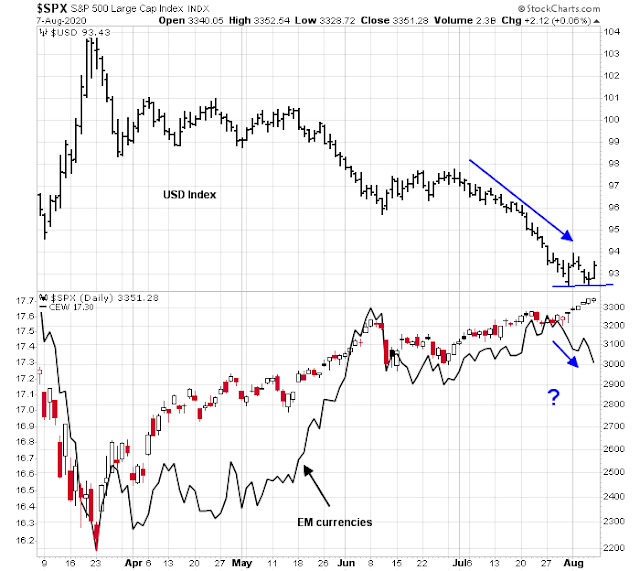 As well, gold is poised for a correction. Alex Barrow observed that gold prices are 4 standard deviations above its 200 dma. He added, “This has only happened two other times in the last 30-years, in Jan 03′ and May 06′.  Both prior instances led to sharp pullbacks of 18% and 25%, respectively. ” 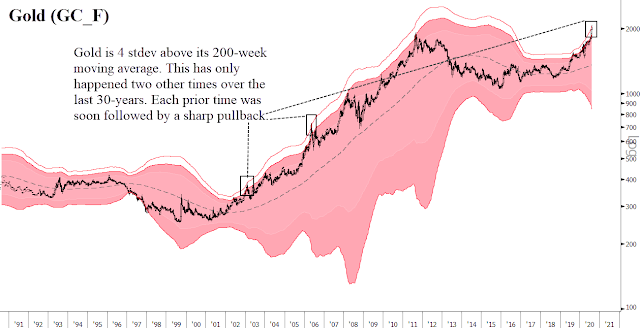 Lastly, silver has soared against gold prices. Nautilus Research found that past similar episodes have been bearish for silver prices. 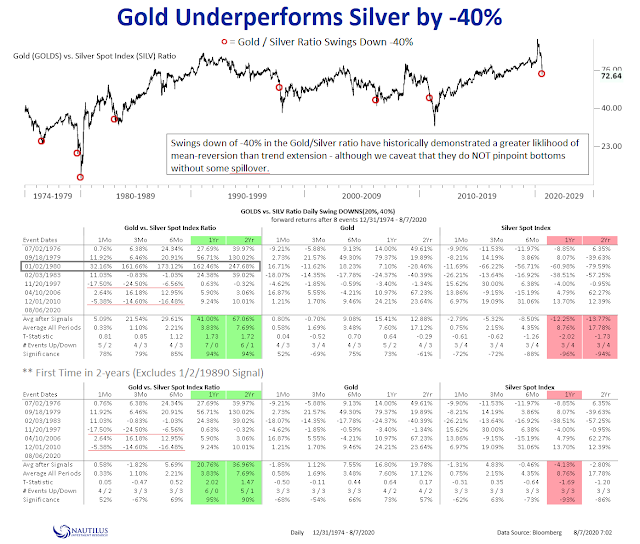 These conditions are setting for a disorderly sell-off in precious metals. One possible catalyst is the CARES Act 2.0 impasse in Washington. Arguably, gold and silver prices have been rising because of the reflationary effects of a combination of easy fiscal and monetary policy. As the agreement for fiscal support has stalled, the Fed may be left pushing on a string. These conditions are potentially bearish for gold and silver prices. As I wrote before, a correction in silver after a parabolic rally is another one of my bearish triggers for equities. Watch gold and silver prices carefully for signs of a downside break. 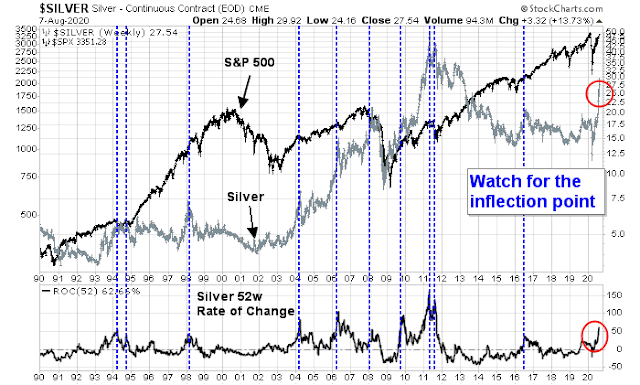 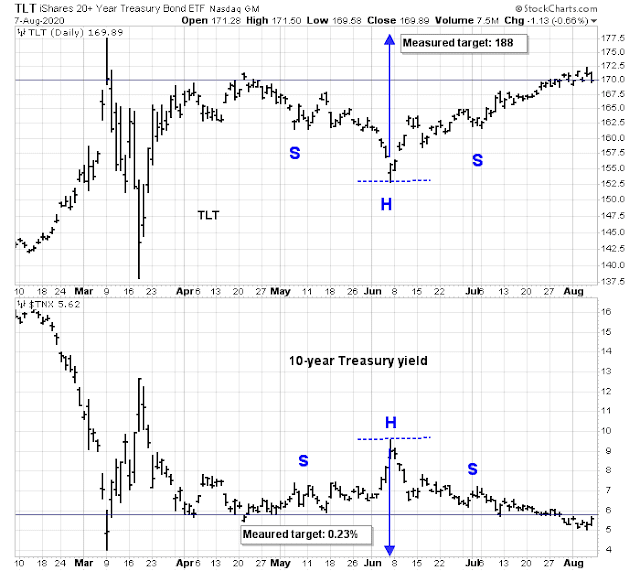 This is the most concrete equity bearish signal to be concerned about.

The market broke up out of a short-term wedge, as measured by the percentage of stocks above their 5 dma, which is short-term bullish. Readings are not overbought, which is an indication that there may be further upside potential. 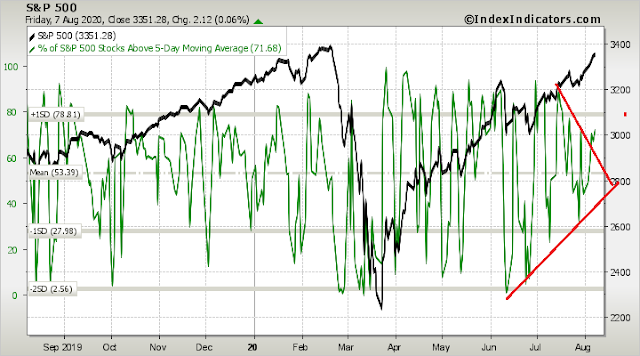 Looking a little longer term, the percentage of stocks above their 10 dma is neutral and rising. Readings are also not overbought, which is also an indicator of possible upside potential. 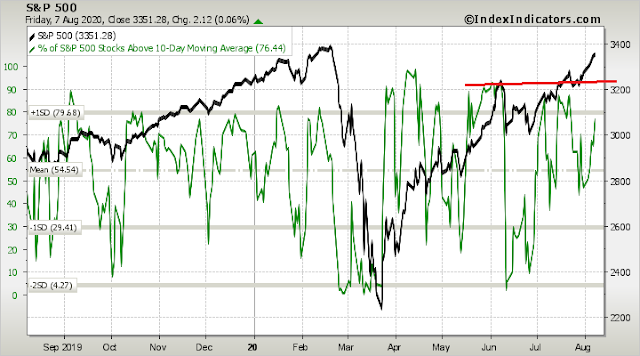 In conclusion, the intermediate term concerns that I raised a week ago remain in place. Global stock prices are not confirming the strength in US equities. Commodity prices are at risk of falling because of an oversold USD, and excessively bullish sentiment in precious metals. The Treasury market is already sounding a warning. The next 10% move in US stocks is likely to be down rather than up.

In the short run, however, price momentum is positive and the market can go higher. However, there is considerable event risk from growing US-China trade frictions, and constitutional uncertainty over Trump’s Executive Order and Memorandums.

79 thoughts on “A global and cross-asset market review”