An uneasy feeling – Humble Student of the Markets 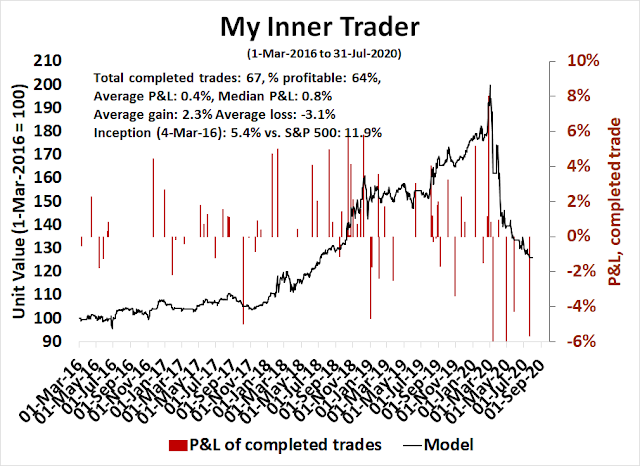 I have some good news, and some bad news for equity bulls. The month is complete and the month-end data is in. The good news is the broadly based Wilshire 5000 strengthened sufficiently to flash a monthly MACD buy signal. In the past, similar buy signals have been followed by multi-month bull phases. 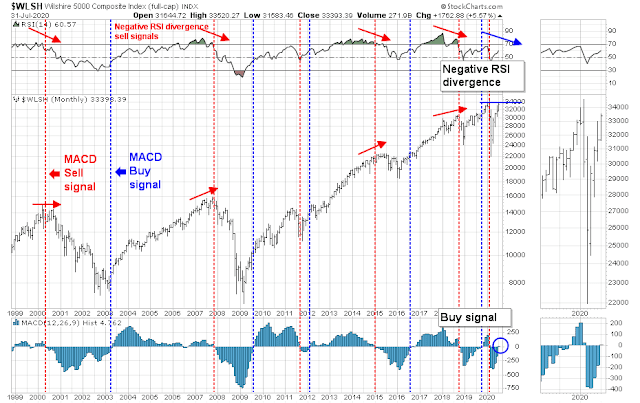 The bad news is the buy signal coincided with a negative RSI divergence just as the index made a closing high. This represents a warning for investors to exit a bull trend after a monthly MACD buy signal. The last sell signal occurred in August 2018, and the market topped out two months later (see Market top ahead? My inner investor turns cautious).

A sell signal just as the system flashes a buy signal? Should investors view this as bullish or bearish?

My inclination is to be cautious about the equity outlook. Risk appetite is deteriorating on global scale, and the deterioration is multi-asset in scope.

Let’s consider what’s happening in the US market. The bond market staged a rally late last week, and bond yields conversely fell. The long bond ETF (TLT) staged an upside breakout of of an inverse head and shoulders pattern. As good technicians know, a head and shoulders formation is not confirmed until the price breaks the neckline. The approximate measured target for TLT is 188. The 10-year Treasury yield similarly broke down in a head and shoulders formation, with an approximate measured target of 0.23%. Bond market price rallies are usually signals of risk-off episodes, which is bearish for equity prices. 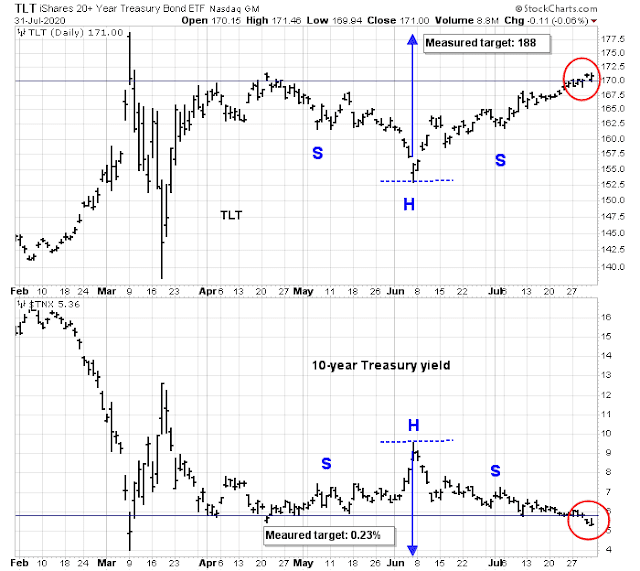 Other credit market indicators have been flashing negative divergences for a while, though the signals are more ambiguous. The relative price performance of high yield bonds and leverage loans relative to their duration-equity Treasuries have lagged stock prices, but they did not flash actionable sell signals the way the Treasury market did last week. 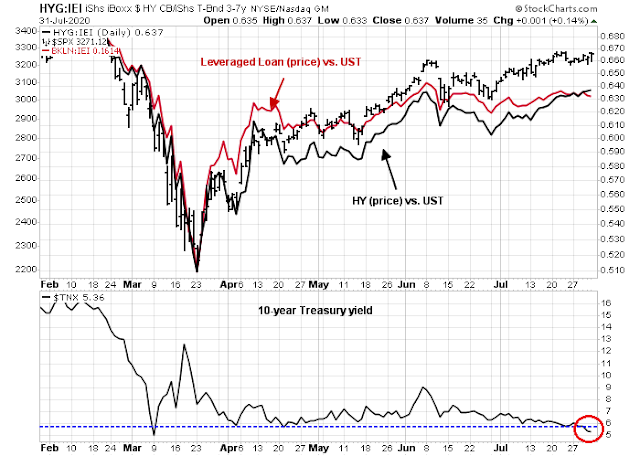 Equity risk appetite indicators are telling a similar story as the high yield market. The consumer discretionary to staples ratio is a commonly used risk appetite indicator. I use the relative performance of equal-weighted consumer discretionary stocks to equal-weighted consumer staple stocks as a way of filtering out the outsized weight of AMZN. The equal-weighted ratio has exhibited a negative divergence against the market for several weeks, but there has been no obvious bearish trigger.

USD weakness has been a tailwind for stock prices. The USD Index has been steadily weakening for the entire month of July, which is supportive of EM assets as they are the most vulnerable to offshore dollar funding pressures. However, EM currencies fell last week even as the greenback weakened. This may be just a blip, but it’s something to keep an eye on. 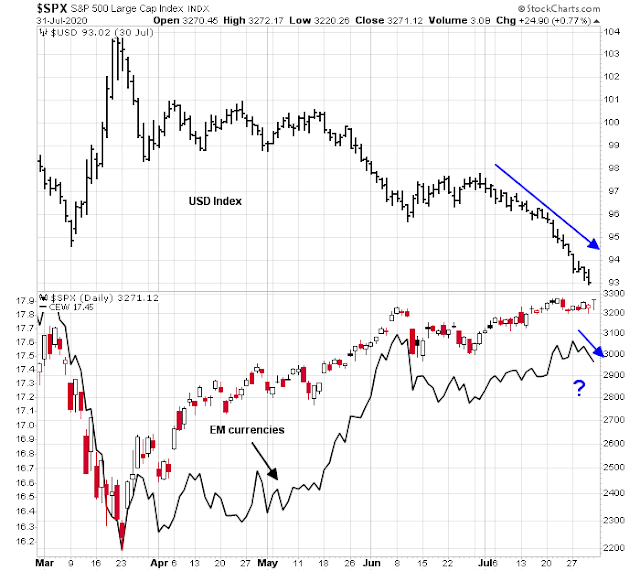 The USD is poised to stage a rally, which would be negative for risky assets. Market positioning in the USD has reached a crowded short, but the challenge for dollar bears is finding a catalyst for further weakness. The rate differential against the Bund, for example, is being squeezed to levels last seen in 2014. In effect, relative economic weakness and aggressive Fed easing is already in the price. What drives the dollar lower? 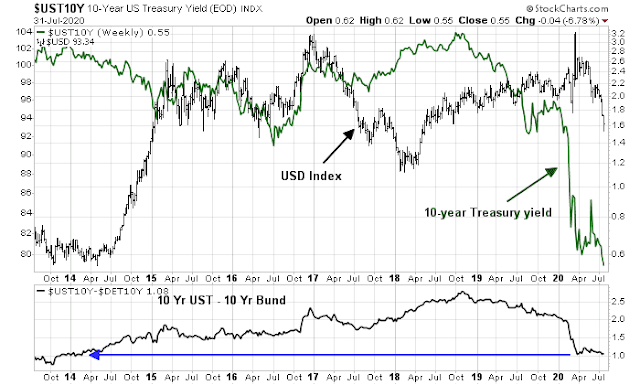 Bearish breaks can be seen in other global equity markets. Eurozone equities fell last week after the euphoria over the €750bn Recovery Fund wore itself out. To be sure, periphery yield spreads have tightened considerably, but equity bulls were unable to follow through after the initial rally. Most equity indices have breached their 50 day moving averages, which is not a good sign considering the historic and unprecedented good news for the European Project. 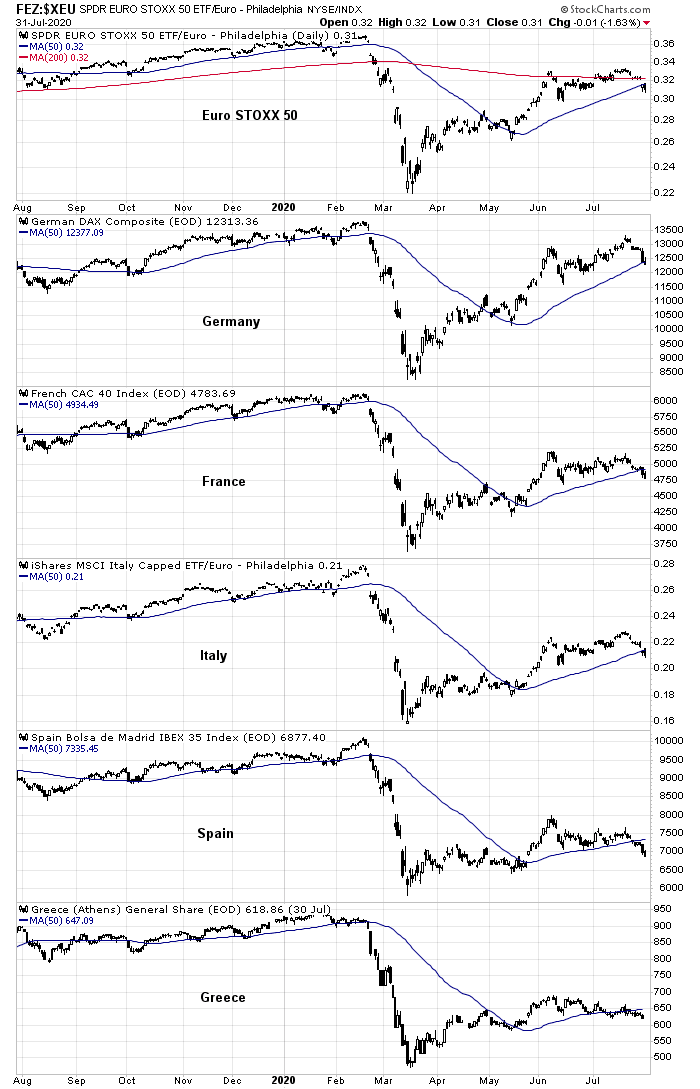 Turning our sights to Asia, the Chinese stock market rally has fizzled out and retreated below the recent upside breakout level. It appears that the Chinese authorities are do not want the stock market to repeat the experience of 2014-15 when prices soared and subsequently crashed. Looking across the equity markets of China’s major Asian trading partners, Hong Kong was never able to stage an upside breakout as it did in 2014-15. Taiwan and South Korea are strong, but their strength is more attributable to the weight of semiconductor stocks, which have been market leaders. Singapore and Australia are weak, and they did not confirm the Chinese stock market’s strength. 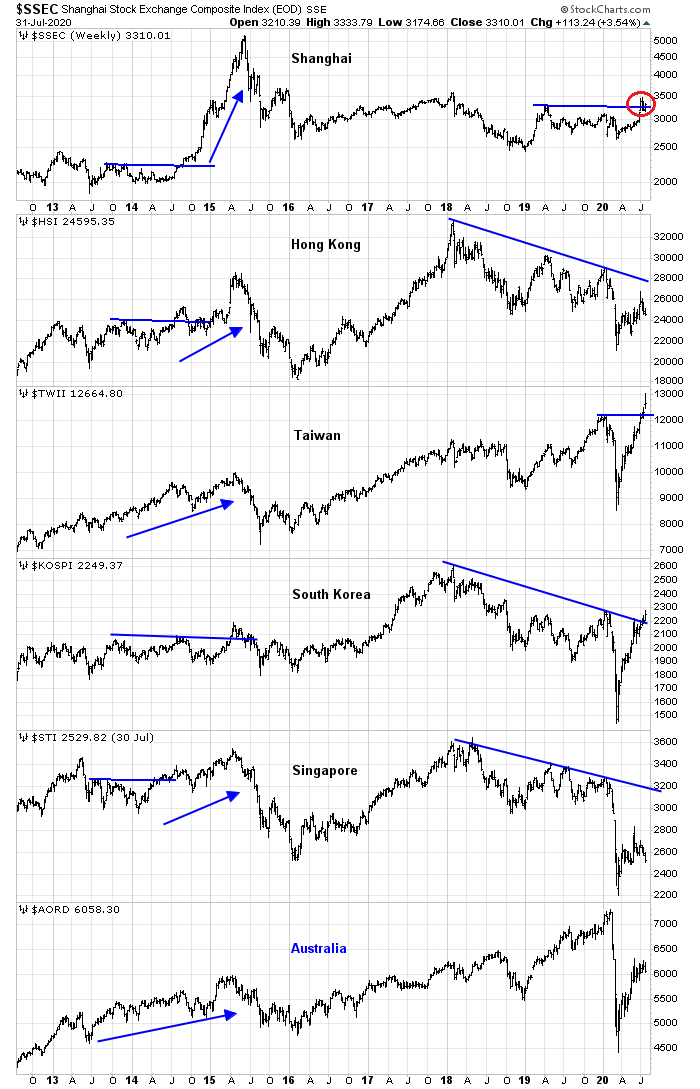 The only thing that’s holding the US stock market up is a handful of FANG+ stocks. It is a testament of their fundamental strength that four of these stocks reported earnings last Thursday (AAPL, AMZN, GOOG, FB), and all of them beat Street expectations.

The NASDAQ 100 remains in a well-defined uptrend and it is approaching a key resistance level. While resistance has not been tested yet, a test next week could see the 5-day RSI exhibit a negative divergence. 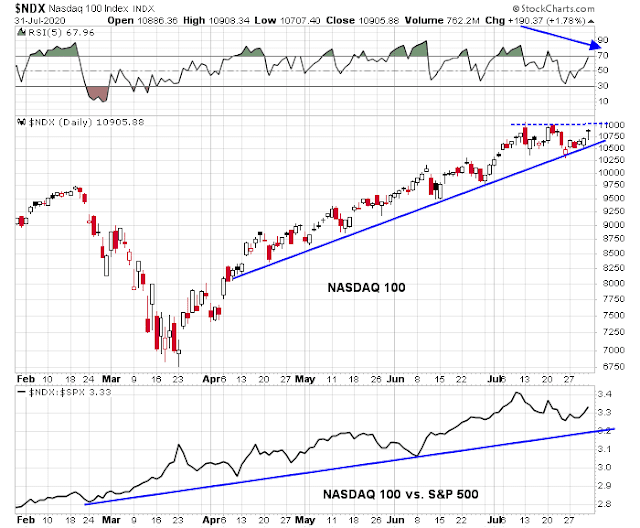 It’s possible that NASDAQ leadership could continue for a bit longer. The Banks to NASDAQ 100 ratio, which is one way of measuring the value/growth relationship, is plunging. The long-term pattern shows a positive divergence in favor of bank stocks, but if history is any guide, the ratio may need to see a final capitulation low before it can turn up. 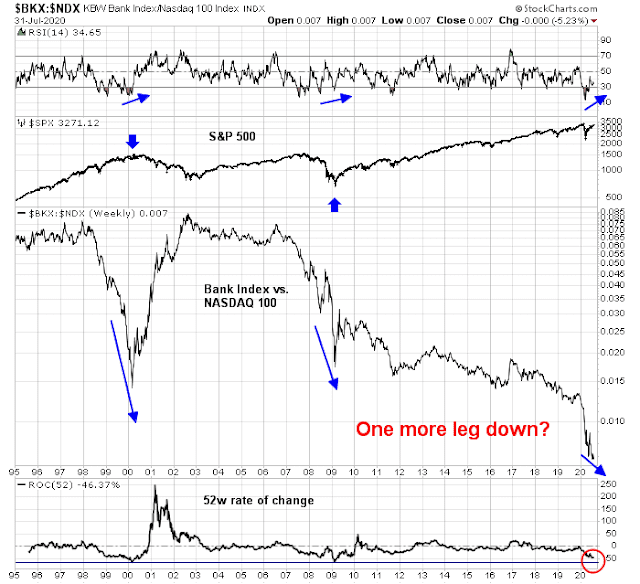 A similar pattern can be seen in the ratio of small caps to NASDAQ stocks, which is another extreme indicator of the current market leadership. This ratio is also exhibiting a positive RSI divergence, but may also need a waterfall decline and wash-out before it can turn up. 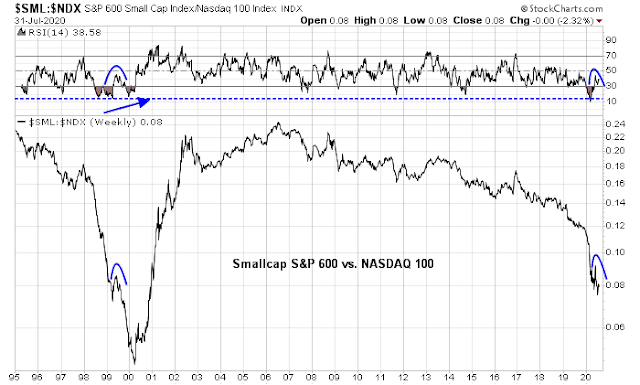 I resolve the combination of global and cross-asset weakness and NASDAQ strength with the following base case scenario. The path of least resistance for stock prices for the next few weeks is down. As stock prices fall, investors will respond by taking refuge in the FANG+ names as the last bastion of growth. In all likelihood, this means a 5-15% correction over the 1-2 months.

Growth at any price

Unless the megacap FANG+ stocks falter, downside risk is limited to a minor correction, and not a major market decline. However, the growth/value stock relationship is highly stretched, and market sentiment is becoming reminiscent of the Nifty Fifty growth-at-any-price stock investing theme of the early 1970’s. The narrative of the Nifty Fifty era was to buy solid large cap growth stocks, and the returns will take care of themselves. Price didn’t matter. Does anyone remember Avon Products, Digital Equipment, Eastman Kodak (!), ITT, Revlon, Schering Plough, and others from those bygone days?

Fast forward to 2020, Bloomberg reported that Blackrock has assembled a quantitative investing group that doesn’t even consider price as a factor when stock picking. Instead, the focus is mainly on alternative data as a source of alpha.

The good news is money managers can now turn to a whole new world of alternative data, says [Jeff] Shen, a finance PhD who joined BlackRock through its 2009 acquisition of Barclays Global Investors.

“Once you get that data, you should look for alpha opportunity associated with that rather than put that data over a price number,” he said. “Once you put the price number in, it potentially destroys the effectiveness of that new data source.”

Shen’s systematic group hasn’t conducted research on the U.S. value factor for years now. In their view, price is fickle. It naturally dominates all valuation formulas. And that means such ratios become the product of historical returns rather than predictors of future moves.

To build portfolios, the group taps into social media to gauge employee sentiment, parses online job postings to see which firms are hiring and uses machine-learning algorithms to figure out how the myriad variables in their models interact with one another. 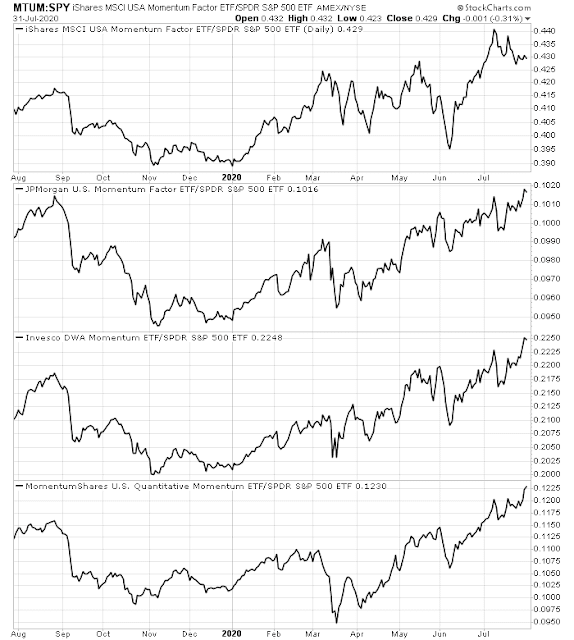 However, momentum has a highly undiversified bet on big technology stocks. The concentrate of this group dwarfs past instances of sector concentration, including the dot-com era. 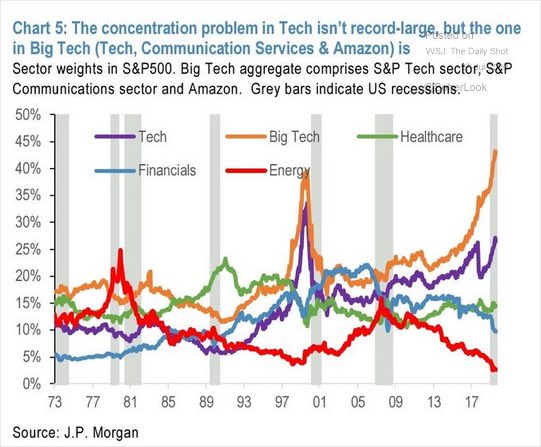 This is a long-term study, and it is silent on when these kinds of stretched relationships reverse themselves. A reasonable guess on time horizon might be 1-3 months. The aforementioned study of the Bank/NASDAQ ratio and the Small cap/NASDAQ ratio suggests that NASDAQ stocks have another upleg which historically lasts another 1-3 months. As well the early warning provided by the negative monthly RSI divergence of the Wilshire 5000 after the MACD buy signal have also signaled tops after 1-3 months.

This scenario is also coincides with the historical pattern of a 3 month period of rising volatility in an election year. 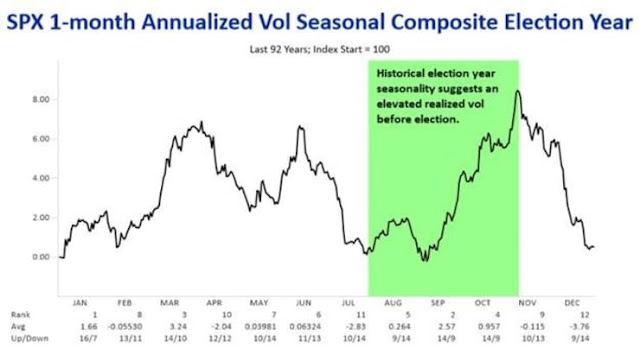 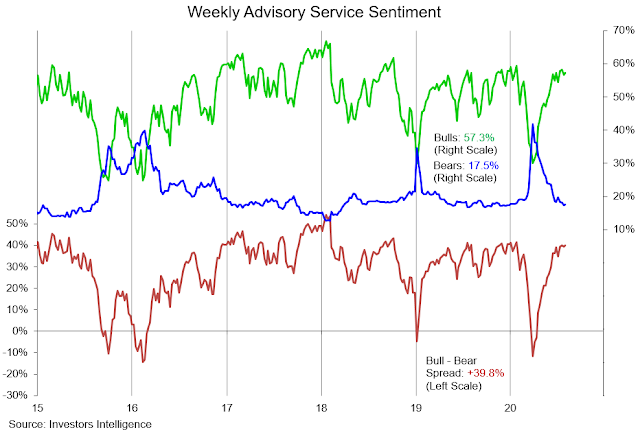 That said, the rally in Treasury prices is a bearish trading signal. Subscribers received an email alert last Thursday that the trading model had turned bearish. Moreover, the daylight to overnight market relative price uptrend that I identified in the past has now been breached (see My inner trader returns to the drawing board). Past breaches have been signals that the market has become less headline sensitive and more focused on longer term trends. Anecdotally, I have noticed that the market hardly responds to positive news on the vaccine and therapeutics anymore. As well, these trend breaks have signaled changes in market direction, which is likely to resolve from a rising market to a sideways or falling market. 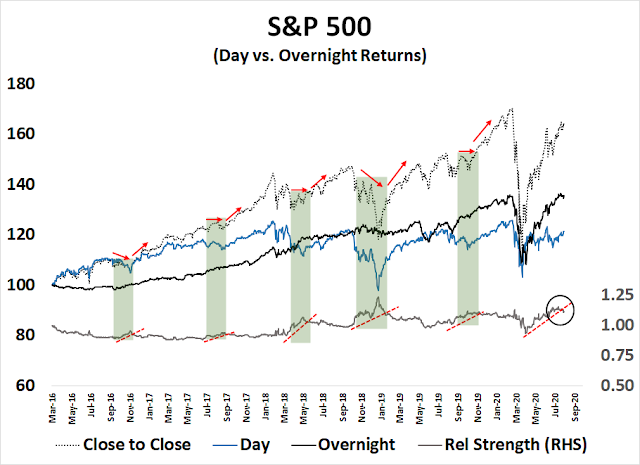 The market action next week will be a key test for both bulls and bears. Short-term breadth is neutral, but tracing a converging wedge that could go either way. A breach of either trend line will be an important signal to near-term market direction. 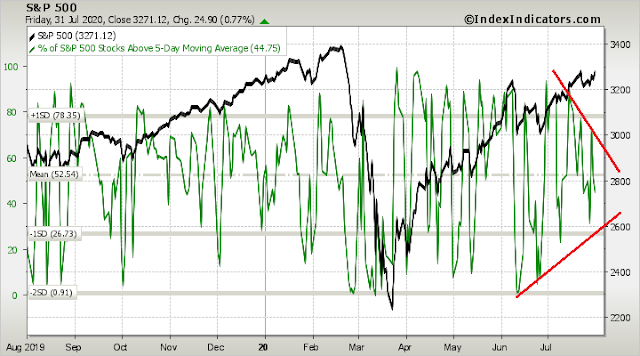 My inner investor is neutrally positioned. My inner trader initiated a short position last week. The S&P 500 is testing the top of a narrow range while exhibiting a negative 5-day RSI divergence. He will set a stop just above resistance at the top of the range, and he will add to his short should the index break support – all on a closing price basis. 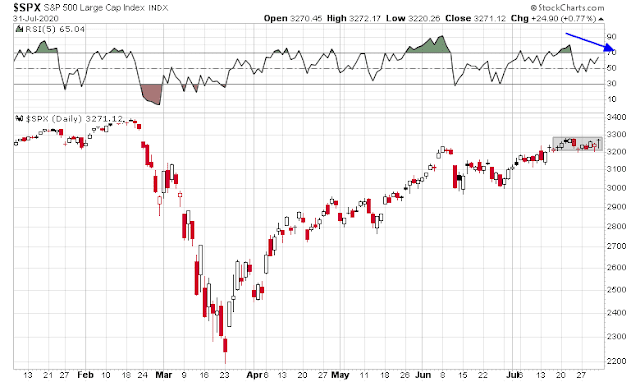 19 thoughts on “An uneasy feeling”