Q2 earnings season is now in full swing. So far 26% of the market has reported. FactSet reported the EPS beat rate rose to 81% from 73%, last week which was well above the 5-year average. The sales beat rate was fell to 71% from 78% last week, but it remains ahead of the 5-year average of 60%.

The bottom-up consensus forward 12-month estimate rose 1.05% last week The market is trading at a forward P/E of 22.2, which is well ahead of historical norms. 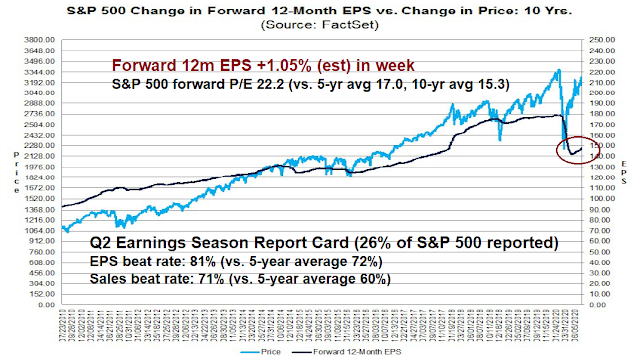 So far, earnings reports have taken on an upbeat tone. Both the EPS and sales beat rates are well ahead of their historical averages. As a consequence, analysts have upgraded quarterly earnings estimates across the board, except for Q2 2020 earnings. 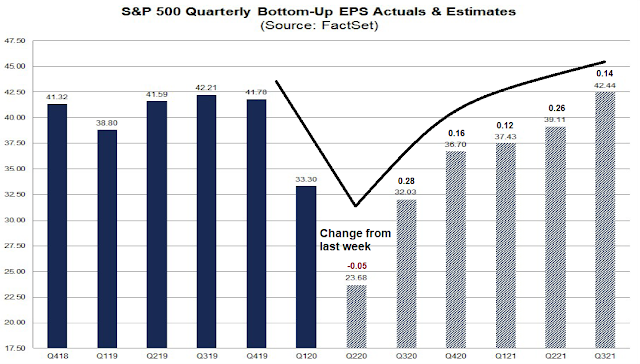 Earnings visibility is improving. More companies are now providing earnings guidance in Q2 compared to Q1. The sectors in which there are more companies with guidance exceed those without are healthcare and technology. 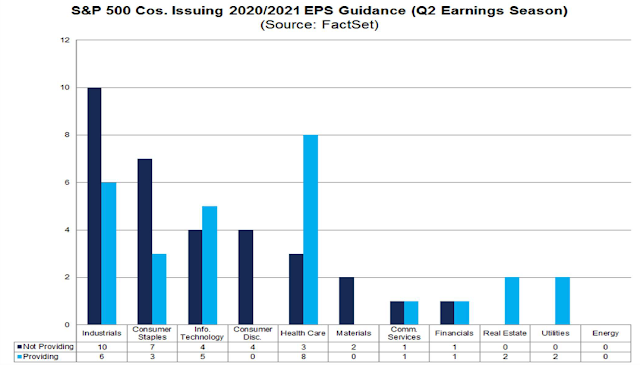 The percentage of companies issuing negative guidance is 22%, which is well above the 5-year average of 69%. That said, 53% of companies are still not issuing or have withdrawn guidance. They cite the uncertainty surrounding the pandemic as the reason for their cloudy outlook.

From the ground up

The economy was rebounding in May and June, but the recovery seems to have stalled out as infections have rebounded. CEO commentary was particularly negative last week. Business leaders are rapidly losing confidence and do not see a V-shaped recovery materializing. There’s a sense that government stimulus appears to be the only thing propping up the economy and it’s creating distortions in unemployment and financial markets. Still (perhaps because of this stimulus) the hot housing market suggests that consumers may not actually be in such bad shape after all–just spending on different things.

Here is a summary of the macro outlook.

From a sector perspective, there were downbeat assessments from consumer services, oil and gas, and materials. On the other hand, the housing market is on fire, and the technology sector outlook is holding up well.

“We spent 12 years building our business and within six weeks, lost about 80% of it. When a business drops that quickly, not only is there this feeling of losing much of what you created, but things start breaking.” – Airbnb (AIRB) CEO Brian Chesky

“We believe that North America production is likely to remain structurally lower in the foreseeable future and has slower growth going forward. The shrinking demand for shale oil and limited access to capital markets, the inevitable rationalization will continue, and we expect to see a more disciplined market with stronger operators and service companies.” – Halliburton (HAL) CEO Jeff Miller

“I am very pleased to report that the recovery in new home demand that we experienced over the course of the second quarter was nothing short of outstanding. Our second quarter results show a remarkable rebound in demand as April net new orders fell 53% from last year, only to see year-over-year orders increased 50% for the month of June. Led by strong demand among first-time buyers, we saw meaningful improvement across all buyer groups and geographies as the quarter advanced. This improvement culminated in June orders increasing 77% for first time, 48% for move up and 21% for active adult over June of last year…buyer demand is clearly experienced a dramatic recovery in the quarter and has remained strong through the first three weeks of July.” – PulteGroup (PHM) CEO Ryan Marshall

“…we continue to see good mortgage activity in the U.S. In fact, in the second quarter, we saw mortgage growth, and we actually had record mortgage loan balances at the end of the quarter ” – UBS (UBS) CFO Kirt Gardner

“I am optimistic, because the combination of low mortgage rates, still in under supplied markets and the broader nesting trend which we see across consumers, I think spells good news for the builder channel” – Whirlpool (WHR) CEO Marc Bitzer

“The combination of strong demand and limited inventory has also allowed us to raise prices across many of our communities. In fact, more than half of our divisions report raising prices in 50% or more of their communities. The typical price increase is in the range of 1% to 3% and includes changes in base price and/or reductions in incentives” – PulteGroup (PHM) CEO Ryan Marshall

“The last months have accelerated the shift to digital, which was already underway..” – eHealth (EHTH) CEO Scott Flanders

“I would say, in the last five months is that digital technology is no longer viewed as just new project starts, but it’s becoming perhaps the most key for business resilience.” – Microsoft (MSFT) CEO Satya Nadella

“…we are also already seeing evidence that this crisis is accelerating the technical and soft skills transformations that we have been tracking and predicting for some time. Acute skills shortages in tech, cyber security, software development, and data analysts for example continue unabated, reinforcing that the need for skills revolution is here in force” – ManpowerGroup (MAN) CEO Jonas Prising

The market valuation is still elevated. The forward 12-month P/E ratio is 22.2. which is well above its 5-year average of 17.0, and 10-year average of 15.3. I estimate what would happen if we to eliminated the technology, consumer discretionary (AMZN), and communication services (GOOG, NFLX) sectors from the P/E calculation. The forward P/E would be 18.6, which is still above the market’s 5 and 10 year averages. 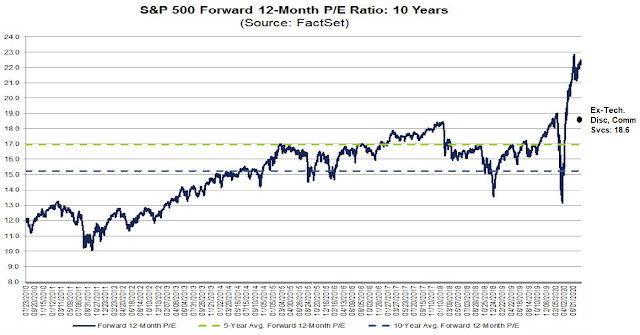 For the companies that have reported earnings, the market reaction has been positive. The market has rewarded earnings beats at a rate above the historical average, and even earnings misses have seen prices fall less than average. 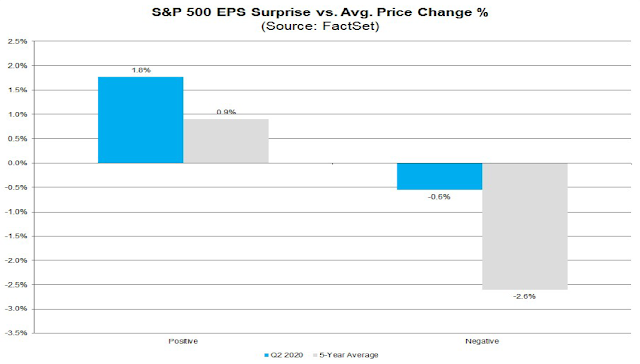 Despite the upbeat tone of the earnings reports, the S&P 500 traded with a heavy tone last week. In particular, the equal-weighted S&P 500 diverged and underperformed the float-weighted S&P 500 since early July, which is the period coinciding with earnings season.

The tone of earnings calls indicate that the macro outlook is turning sour.  As I pointed out last week (see Earnings Monitor: Waiting for Congress), the “elephant in the room of the earnings outlook is what happens when the fiscal support from CARES Act expires at the end of July”.

High frequency data is increasingly telling a story of a softening economy. The CARES Act support is expiring, and so are tenant eviction moratoriums. Last weekend was the deadline for an agreement so that states can re-program their computers to conform to a new support package.

The Democratic controlled House passed a $3 trillion rescue package two months ago as the opening offer in negotiations. The Republicans were scheduled to table a proposal last Thursday, but they have been divided and unable to present a united front. In all likelihood, there will be a rescue package, but the market will be focused on the details and the level of support.

Time is of the essence. Small businesses are failing or operating at low capacity, which results in a job shortage. If a rescue bill makes further cuts to aggregate household income, it will depress demand, and add to a death spiral of more failing businesses, more job losses, and further nosedive demand. 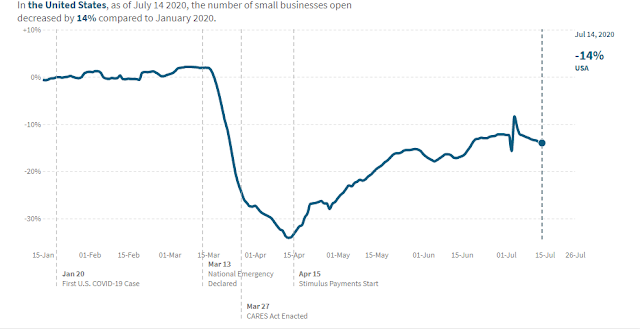 State and local government budgets are under tremendous pressure. Without aid, employment in that sector will collapse. Previews of the upcoming July Employment Report outlook is already starting to look ugly. 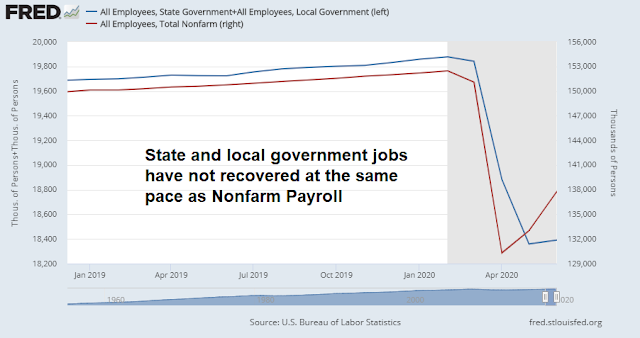 The rest of the FANG+ stocks are expected to report this week, namely Facebook (FB), Apple (AAPL), Amazon (AMZN) and Alphabet (GOOG). Their reports will probably be overshadowed by events in Washington.