Warnings, warnings everywhere, but bears should not drink… – Humble Student of the Markets 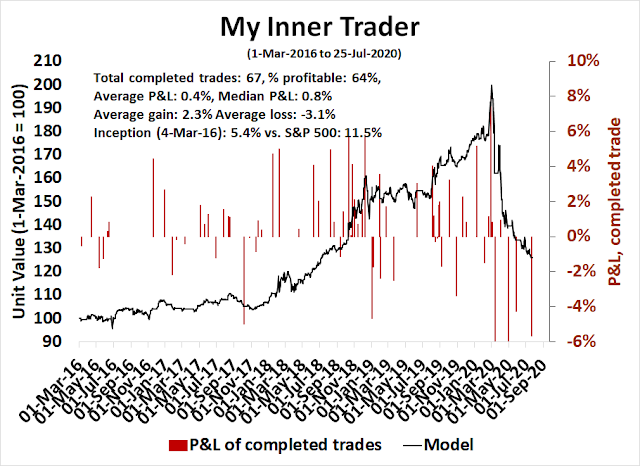 There are two kinds of sentiment models. Some sentiment readings come from investor surveys, and others are derived from investor positioning. I prefer the latter because it shows how people are behaving with their money instead of just expressing opinions.

Intermediate term option sentiment models are flashing warnings everywhere. It is a sign of froth in this market when individual stock volumes have exceeded the volumes of the underlying stocks. 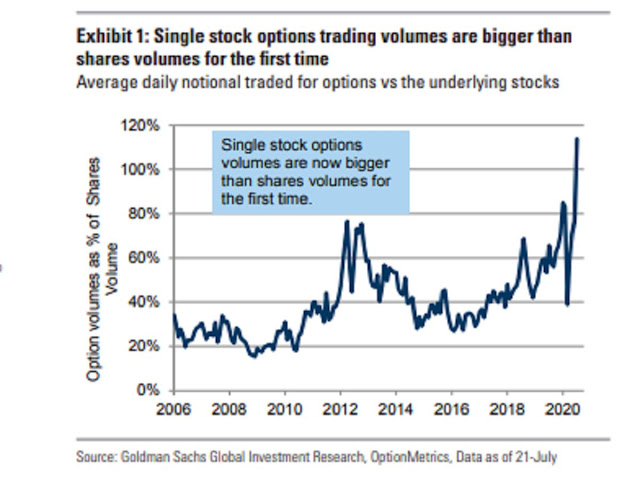 In addition, the 50 day moving average (dma) of the put/call ratio (top panel) is extremely low. Past episodes have seen the market either correct or stall. As well, there is an enormous gap between the equity-only put/call ratio (CPCE) and the index put/call ratio (CPCI). Individual traders (dumb money) tend to express their exposure preferences through individual stock options, while professionals (smart money) use index options for hedging. Such extreme differences in option opinion between the two groups have created headwinds for stock prices in the past. 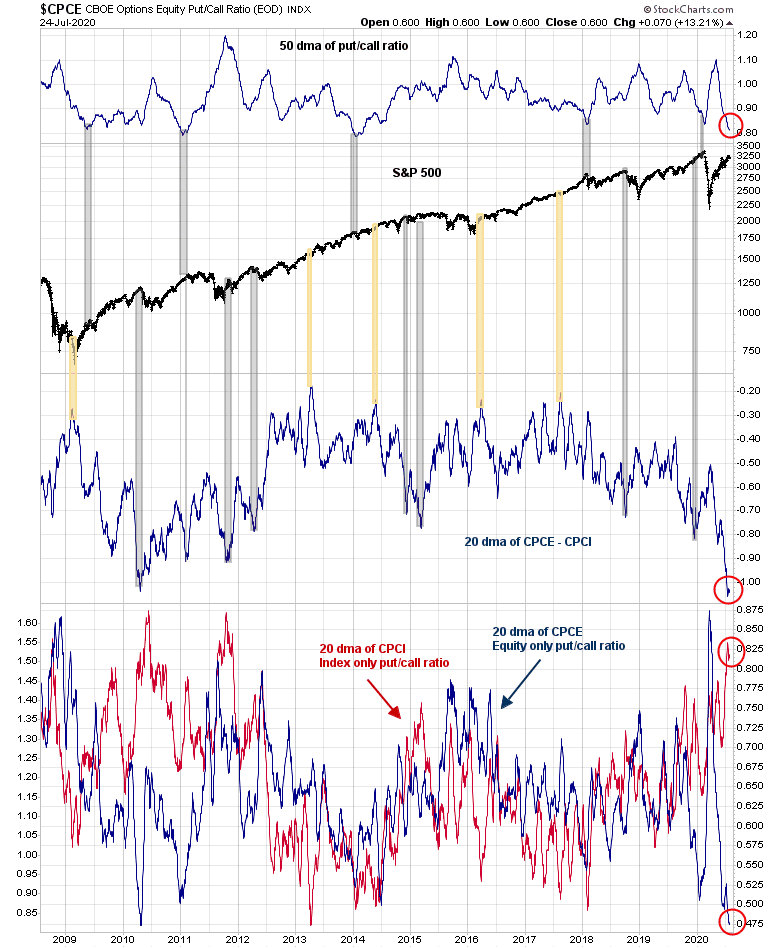 Although this is an opinion survey, the NAAIM Exposure Index, which measures the opinions of RIAs, has returned to bullish extremes. I would caution, however, that this indicator has only worked well as a buy signal when RIAs panic, but it has not flashed actionable sell signals in the past. Nevertheless, it does show that sentiment has reached high levels of bullishness. 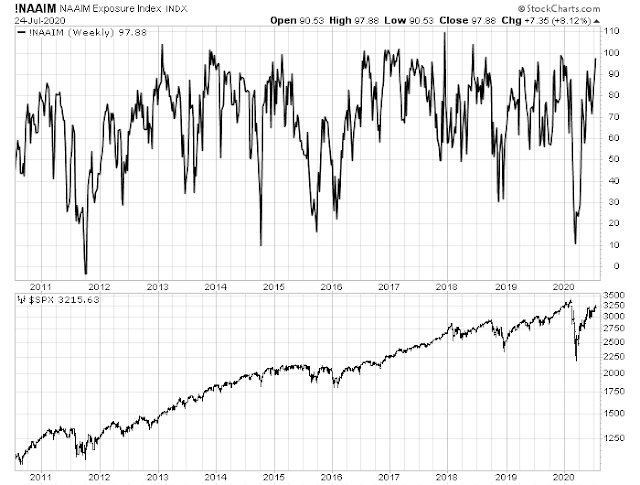 The Investors Intelligence Survey shows that the bull-bear spread has returned to the pre-pandemic levels seen before the COVID Crash. 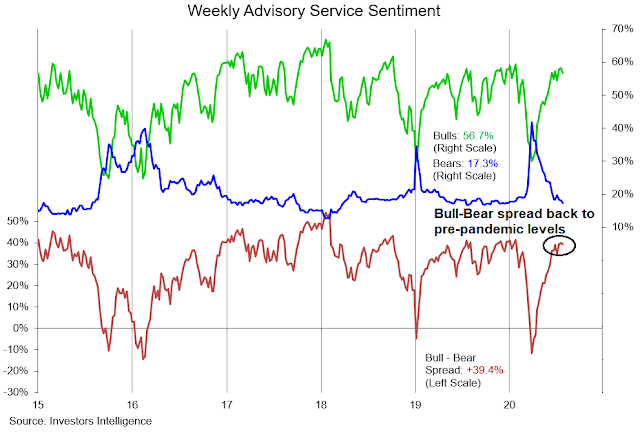 The State Street’s North American confidence, which measures how institutional managers are positioned using aggregate custodial data, shows that institutional bearishness has evaporated. That said, readings are not at bullish extremes.

I would warn, however, that these excessively bullish sentiment readings are only contrarian bearish setups. While the intermediate term risk/reward for the stock market is subpar in light of these conditions, short-term conditions have suddenly flipped from bullish to bearish. After two weeks of faltering NASDAQ price momentum, the tone in my social media feed has turned to a panicked “this is the start of a major correction” narrative. While the NASDAQ 100 has violated a support level (dotted line), the index remains in an uptrend.

Short-term breadth is recycling from an overbought reading, but it is still tracing out a pattern of high lows. 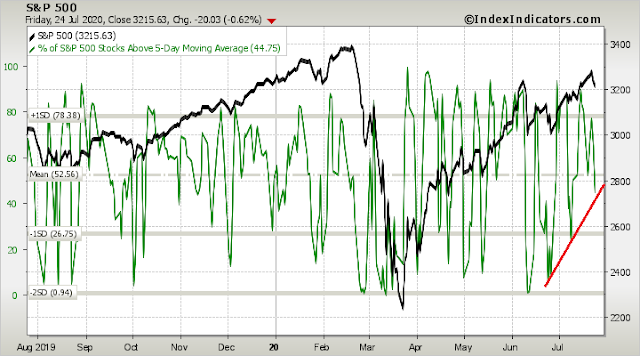 A relief rally may be in order early next week.

While we certainly have the elements of a bearish setup, we don’t have a definitive sell signal for the stock market yet. Here are some inter-market, or cross-asset, bearish triggers that I am monitoring.

First, bond prices and, its inverse, bond yields are useful risk-off indicators. The 10-year Treasury yield has been testing a key support level, which it has failed to violate. Conversely, the long bond ETF (TLT) appears to be forming an inverse head and shoulders formation. As good technicians know, a head and shoulders pattern is not confirmed until the price breaks the neckline. If either the 10-year yield were to violate support, or TLT stages an upside breakout through the neckline, it would be a risk-off signal. 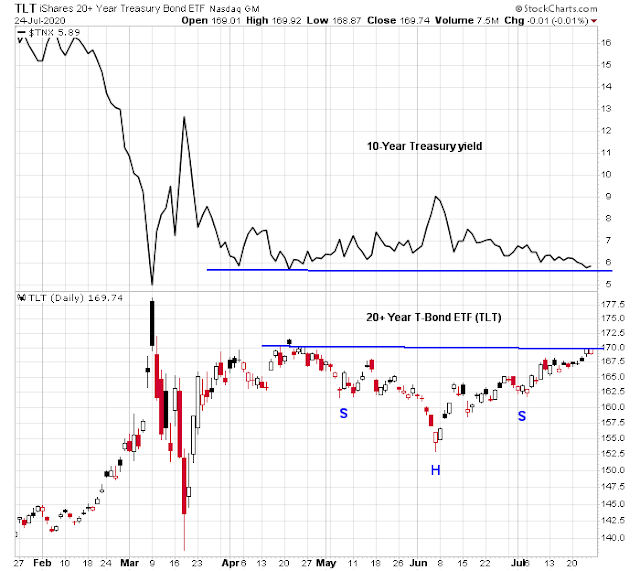 One sign of froth present in the market is the surge in silver prices, which is a bullish cyclical indicator. Troy Bombardia observed that call option volume on SLV, the silver ETF, has spiked to an all-time high. Call option volume on GLD, the gold ETF, is also at one of its highest levels ever (not pictured). 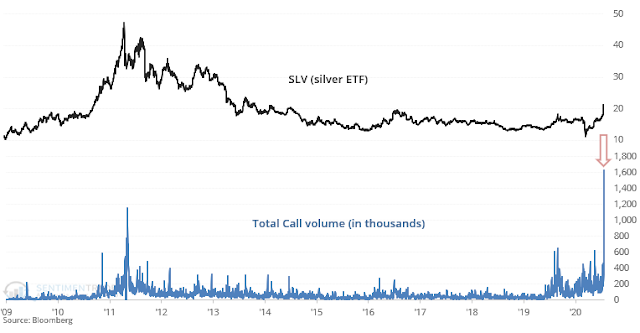 Past episodes of price reversals after silver goes parabolic have usually not been good for stock prices. I am watching for an inflection point in silver’s 52-week rate of change (bottom panel). Again, we have a bearish setup, but not a sell signal for equities. 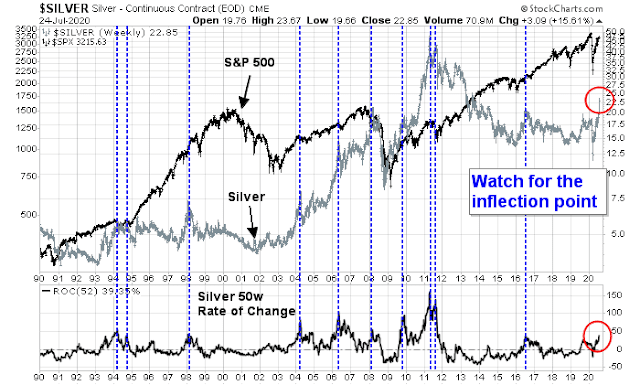 As well, recent weakness in the USD has been supportive of emerging market equities. The strength in EM currencies and EM bonds has put a bid under fragile EM economies with large current account deficits. 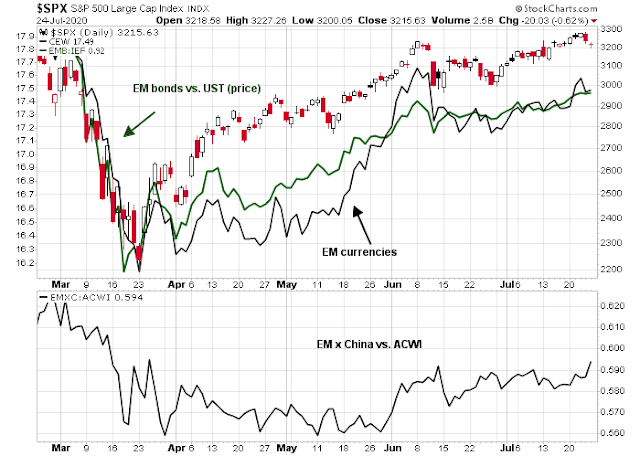 What if the USD were to reverse upwards? Callum Thomas of Topdown Charts pointed out that speculative positioning in the USD is at a crowded short. In addition, the USD Index is testing key rising uptrend support. This is the perfect combination for a dollar rally. 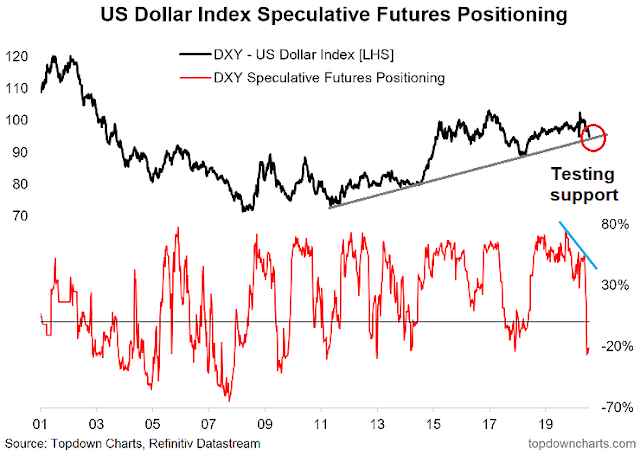 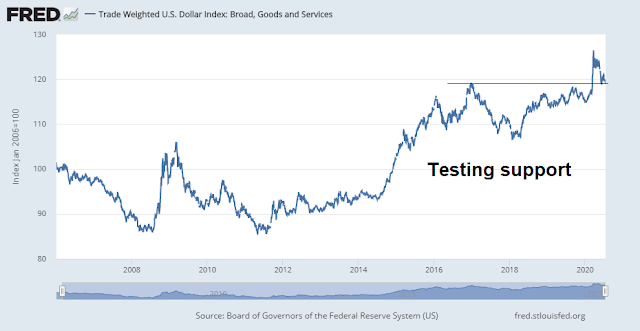 Were the USD to turn around and begin to rally, it would create an additional headwind for risk appetite.

Last week’s market action may be indicative of a change in psychology. The market’s focus appears to be shifting towards how Congress will respond to the economic cliff of the expiry of the $600 per week unemployment insurance payments on July 31.

More and more high frequency data is pointing to a softening in economic growth, such as the Census Bureau’s Household Pulse Survey of employment. 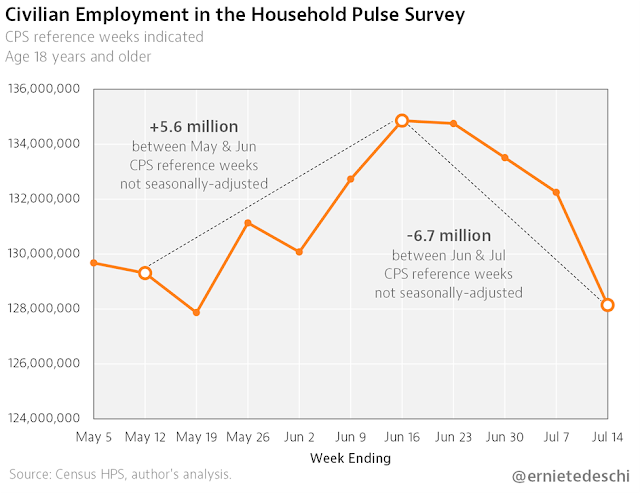 The New York Fed’s Weekly Economic Index is stalling and may be starting to roll over. 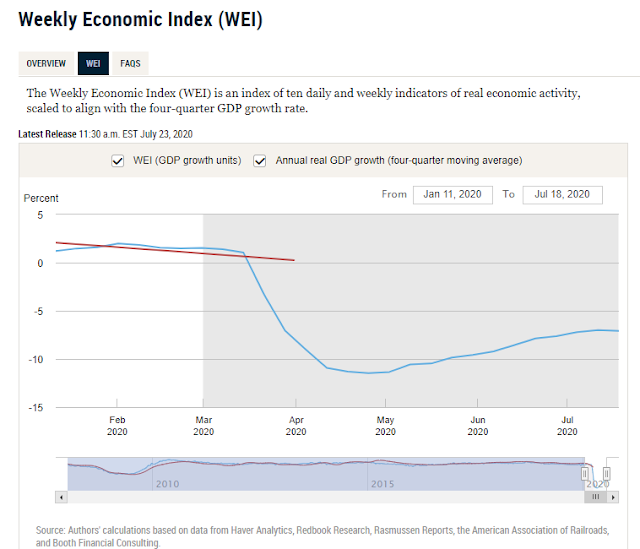 Data from Yelp shows that permanent business closures are rising, with restaurants and retailers the hardest hit.

A renewal of the expiring CARES Act fiscal stimulus is therefore of high urgency if the economy were to avoid falling off a cliff. Lawmakers have already missed the July 25 deadline for states to re-program their computers to implement a new stimulus plan. The Republicans are in disarray and have not been able to present a united front. Republican Senate majority leader Mitch McConnell is expected to unveil a proposal Monday, which is necessary before they even begin to negotiate with the Democrats in Congress.

Expectations are rising for a deal. This week’s cover of the Economist could be interpreted as a contrarian magazine cover indicator. 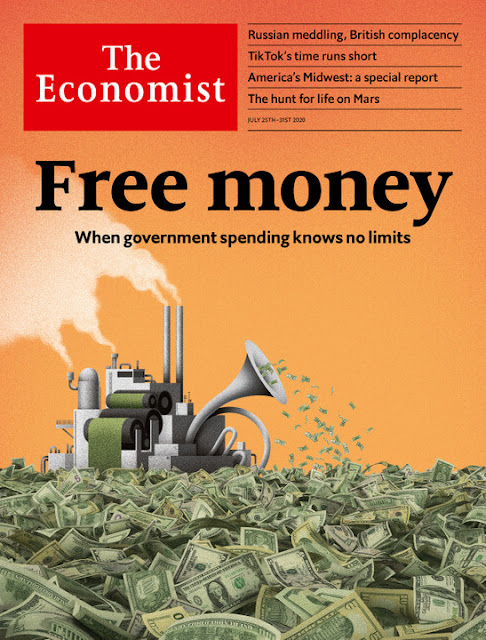 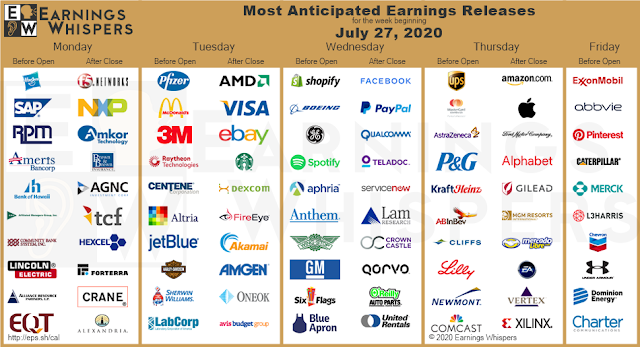 While I am intermediate term cautious, my inner trader is inclined to wait for bearish confirmation of a break before taking action on the short side.

23 thoughts on “Warnings, warnings everywhere, but bears should not drink…”