Analyzing the bull case – Humble Student of the Markets

Regular readers will know that I have been cautious about the equity markets over the past few months. Good investors cannot be overly dogmatic, and in that spirit, I contemplate what the bull case may be,

From a strictly technical perspective, price momentum has been strong. The Wilshire 5000 is on the verge of flash a monthly MACD buy signal, depending on what level the index closes at month-end. Past signals have usually seen the market rise strongly afterwards. 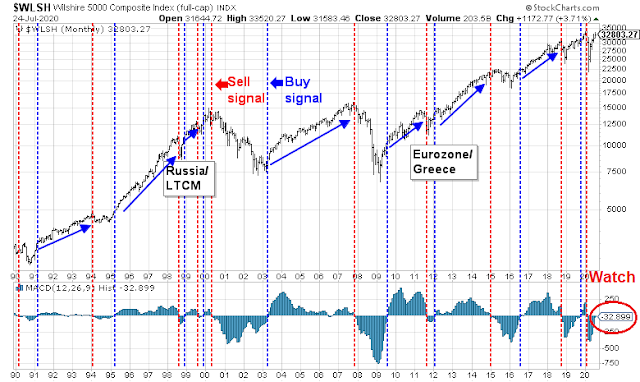 Let’s put on our rose-colored glasses, and consider all the elements of the bull case.

One of the puzzles of the recovery since the March bottom is the market’s ability to shrug off bad news. This is the worst recession since the Great Depression, but the market is behaving as if the economy executed a V-shaped recovery.

Joe Wiesenthal at Bloomberg solved the puzzle by pointing that both retail sales (yellow line) and wages plus unemployment insurance (green line) have recovered to above their pre-pandemic levels. These are clear V-shaped recoveries.

While many investors have pointed to the Fed supporting the market with a put, which is partially correct. Wiesenthal’s analysis shows that it has been fiscal policy that has been the real put option for the economy.

A cyclical recovery in 2021

In addition, there are reasons to be optimistic about the growth outlook. Viewed in the context of a V-shaped recovery, 2020 earnings are expected to be a disaster, but the market is looking ahead to 2021. FactSet reports that bottom-up derived 2021 earnings is 163.77, making the 2021 P/E 19.6, which is elevated but more reasonable.

Here are some factors that could further boost 2021 earnings, which makes valuation more attractive. First. we could see the widespread availability of a vaccine by mid-year. There are many groups racing to develop a vaccine. Several leading candidates are entering phase three trials while simultaneously setting up production. Should any of them be successful, we would see positive results by late 2020, initial availability in early 2021, and widespread availability by mid 2021. This would allow the world to start relaxing and start returning to normal by mid to late 2021. The markets would start to discount a cyclical rebound and rising earnings by Q4 or Q1.

As well, we can count on more fiscal stimulus after the election, no matter who wins. If Trump were to regain the White House, the most likely course of action is more deregulation and fiscal stimulus in the form of another tax cut. The 2017 tax cut provided a 7-9% one-time boost to earnings. Pencil something similar in for Trump’s second term. A Biden presidency would have different priorities, but expect more government spending in the form of infrastructure, green initiatives, and redistribution policies that boost middle and lower class spending. Both Trump and Biden are likely to be Modern Monetary Theory adherents, and both would spend (in different ways) with Fed support. The combination of easy fiscal and monetary policies are growth positive, regardless of the winner.

Across the Atlantic, we have already seen the EU’s €750 billion Recovery Fund. Without going into too many details, the EU has agreed to borrow up to €750 billion in the market, and disburse the funds to member states, partly as grants, and partly as loans. One often cited weakness of the euro common currency is it monetary integration without fiscal integration. The Recovery Fund represents a useful step towards fiscal integration, in the manner that the US federal government supports the activities of state and local governments with funds and services. 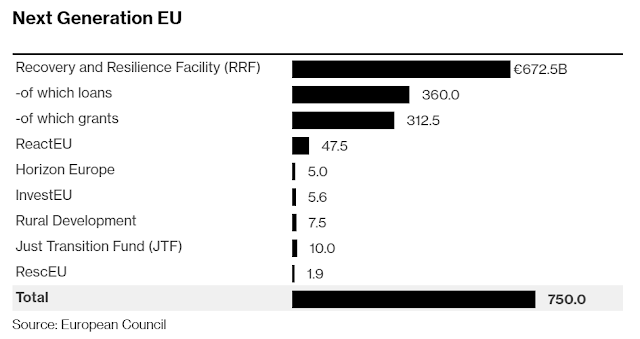 In short, the global economy is turning Japanese, but in a good Abenomics sort of way. Japan’s Prime Minister Abe outlined his “Three Arrows” strategy to revive the economy, and the playbook seems to be adopted in slightly different forms by countries around the world.

Still, isn’t the market expensive based on traditional valuation methods? Maybe not. Callum Thomas of Topdown Charts compared and contrasted the market’s forward P/E ratio to its equity risk premium (ERP), which compared the earnings to price ratio to prevailing interest rates. While the market appears expensive based on P/E, it is quite reasonably priced based on ERP. 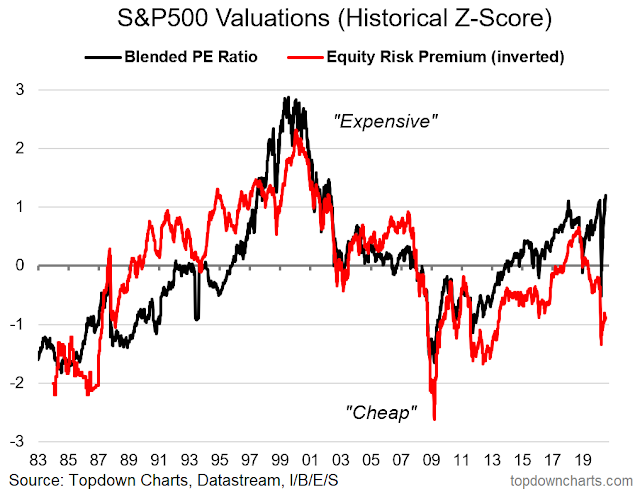 Lisa Abramociz at Bloomberg pointed out that the size of negative yielding bonds has grown to levels last seen in early March. This is a sign that global central banks are pushing down rates and engaging in financial repression. 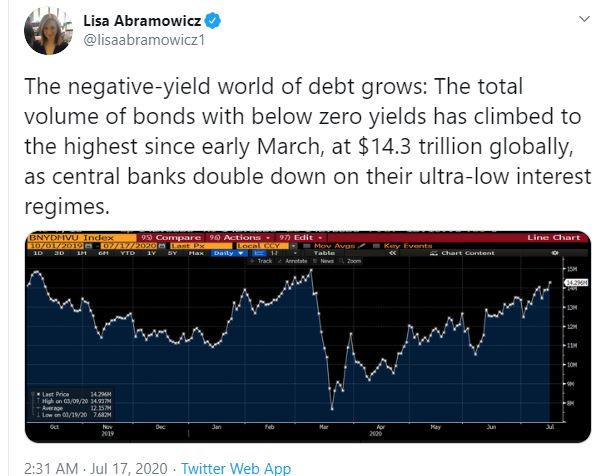 Real 10-year yields are negative. Under those circumstances, high P/E ratios can be justified in the face of low and negative real bond yields. TINA – There Is No Alternative to stocks. 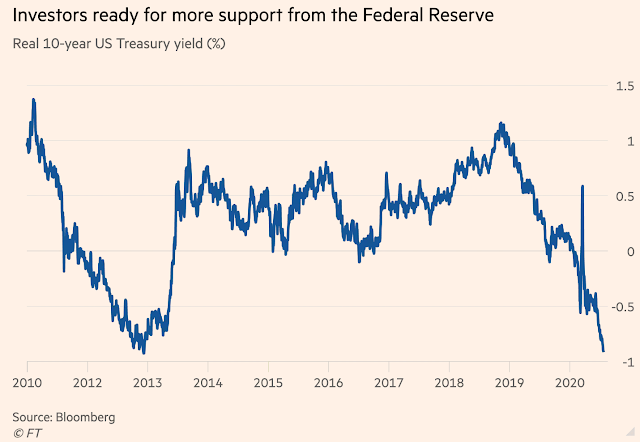 Another reason why equity prices might not be that expensive can be seen in issuer behavior. During the dot-com bubble, the cost of equity was low, and companies rushed to finance at the equity window. This time, we have seen a flood of borrowing, but not that much new supply of new equities. In fact, IPO activity is not that elevated by historical standards. This is an indication that companies that need funds do not find equity financing to be an extremely attractive option. 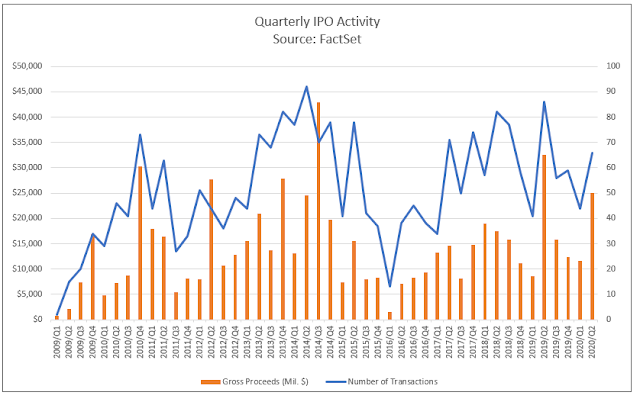 Stocks may not be that cheap, but they don’t look wildly expensive by these measures.

To be sure, there are pockets of froth in the market. Marketwatch reported that billionaire Mark Cuban was asked by his niece for stock tips, which is a sure sign of a bubbly market.

My 19 year-old niece is asking me what stocks [she] should invest in…Everybody’s a genius in a bull market and everybody’s making money now because you have the Fed put.

The NASDAQ 100 to S&P 500 ratio looks very extended. It has breached the Tech Bubble highs while exhibiting a 14-week RSI negative divergence, in the same way it did at the March 2000 high. 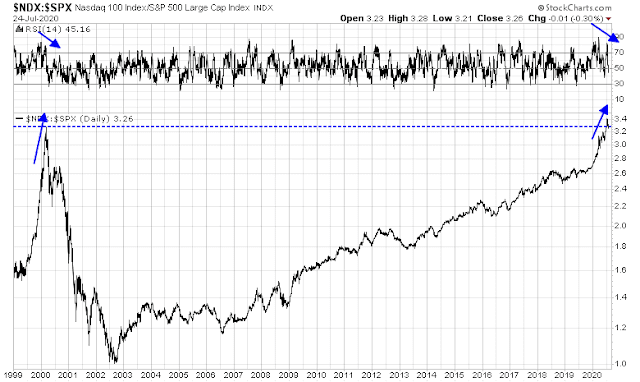 However, a recovery in the economy will allow a health rotation out of the NASDAQ leaders into value and cyclical names. The cyclically sensitive copper/gold and platinum/gold ratios are turning up, indicating that the recovery is broad based and global in nature. 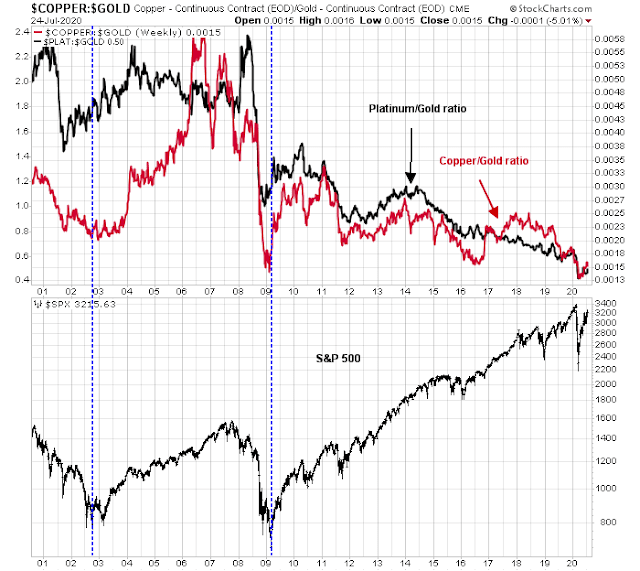 The stock market can continue to advance under such a scenario.

In summary, the bull case rests on the assumptions of a continued V-shaped cyclical recovery, supported by easy fiscal and monetary policy, the discovery of vaccines and treatments, and a mis-interpretation of P/E as a valuation metric. There are many moving parts to this scenario, and stocks can only advance based on a number of key assumptions.

One key assumption is the continuation of fiscal and monetary stimulus. While global central banks have signaled their willingness to be accommodative, the continuation of fiscal support in the US remains an open question. The $600 per week unemployment insurance benefits is set to expire at the end of July. The White House and Senate Republicans have not agreed on a common position, and the Republican and Democrat positions are far apart. As the analysis from Joe Wiesenthal pointed out, much of the V-shaped rebound is attributable to fiscal support. Consumer confidence is facing a cliff if lawmakers cannot come to an agreement. Moody’s recently issued a stark warning:

A reduction in federal support from current levels, which is likely, would constitute a financial shock for many households and businesses given still-high levels of unemployment and depressed economic activity

While we had our rose colored glasses on, we forgot about the possibility of tax increases should Biden win in November. Biden has vowed to unwind the some Trump 2017 corporate tax cuts, impose a corporate minimum tax, and proposed other investor unfriendly tax measures that are likely to compress P/E ratios.

Even if Trump were to win, the bullish scenario assumes that he does not escalate his trade wars with China, the EU, and other trading partners. Rising trade tensions would serve to dampen the global growth outlook, which also puts the V-shaped recovery into jeopardy.

The bullish scenario also assumes no vaccine development stumbles. While initial test results are promising, projecting the successful development of a vaccine at these early stages is like evaluating a promising eight yield-old dancer and thinking that she will become a successful ballerina. There are two leading vaccine candidates in the West. Based on what we know so far, the AstraZeneca-Oxford vaccine has shown itself to be protective in animal tests, but it does not prevent infection. The vaccine is likely to mitigate COVID-19 in inoculated patients, but the patients could still transmit the virus to others. As well, the vaccine needs to be injected in two stages, which creates challenges for production and deployment.

The Moderna vaccine is based on a totally news and unproven technology, which can make production difficult. In addition, the widespread insider selling of Moderna stock in the face of positive vaccine development news is disconcerting.

Any successful development of a vaccine will be too late if there is a COVID second wave in the fall. A second wave of infection would once again crater the economy, which would mean a double-dip recession. Say goodbye to the V.

As for the question of valuation, the TINA narrative of equities competing with bonds at negative real yields makes logical sense. However, investors have yet been able to explain the spread in valuation between US and non-US equities.

The BoA Global Fund Manager Survey shows that managers have piled into US equities, and FANG+ stocks in particular, as the last source of growth in a growth starved world. A rotation out of the high flying NASDAQ names into cyclical stocks is likely to see rotation out of US into other regions. US stocks would lag and may see limited upside under such a scenario. 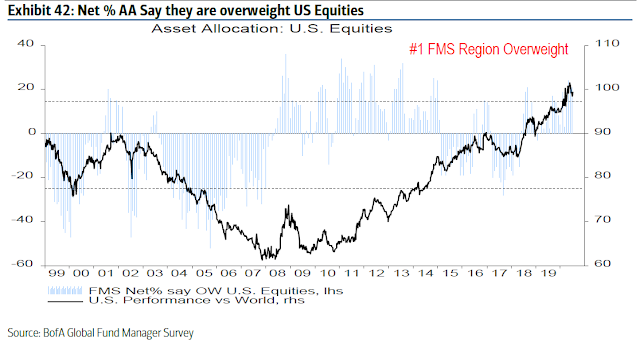 Remember Bob Farrell’s Rule #4, “Exponential rapidly rising or falling markets usually go further than you think, but they do not correct by going sideways.” Each decade seems to experience a mania of some sort, and we are very late in the latest FANG+ mania. If and when it deflates, is it reasonable to expect cyclical stocks, value stocks, and non-US stocks can pick up the slack? 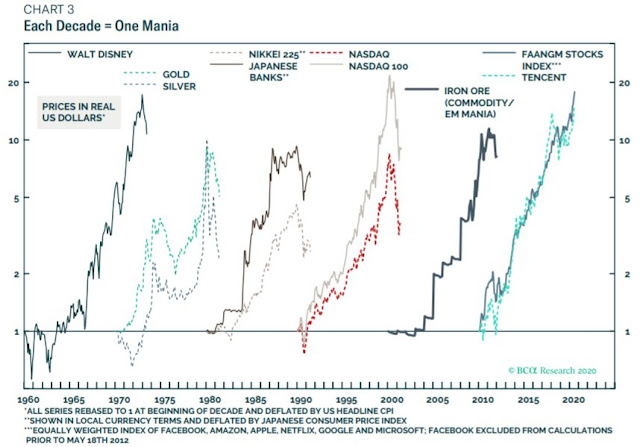 Finally, while the pending monthly MACD buy signal is a constructive development, the buy signal can be negated by a negative RSI divergence. A negative RSI divergence is only triggered if the MACD model is on a buy signal, and the index breaks or tests a previous high while the 14-month RSI makes a lower high. This model flashed a sell signal in August 2018, just ahead of the late 2018 top (see Market top ahead? My inner trader turns cautious). If the Wilshire 5000 were to flash a monthly MACD buy signal at the end of July, and if it were to test the old highs in August, there is a strong possibility that the market would then exhibit a similar sell signal. This is something to keep an eye on. 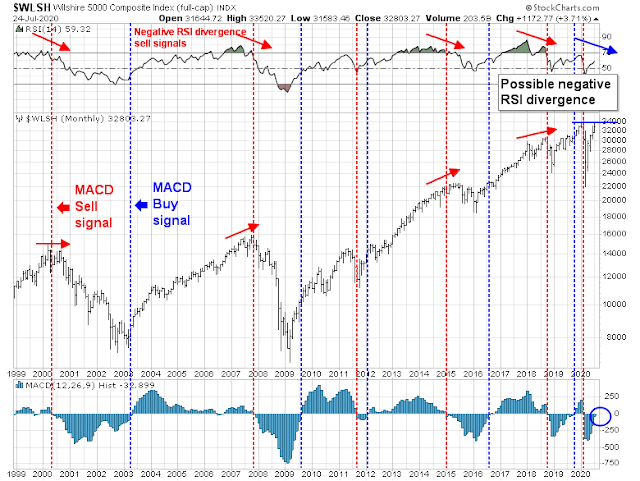 In short, while the bull case does make some sense, but much has to go right before the market can blast off into a renewed bull phase.

30 thoughts on “Analyzing the bull case”