A market in transition – Humble Student of the Markets

Mid-week market update:I observed in the past that the market had undergone a regime shift, and most of the gains were occurring overnight, while prices were lagging during daylight hours (see My inner trader returns to the drawing board). This is an indication of a jittery market sensitive to headlines that were released after the market close. In the past, past breaks of the overnight to daylight return ratio marked a change in market direction.

As the chart below shows, the overnight to daylight ratio is testing a key rising trend line and it may be on the verge of breaking down through the uptrend. While I am not ready to definitively declare a break, there are signs of unusual market behavior that suggest a phase shift is under way. 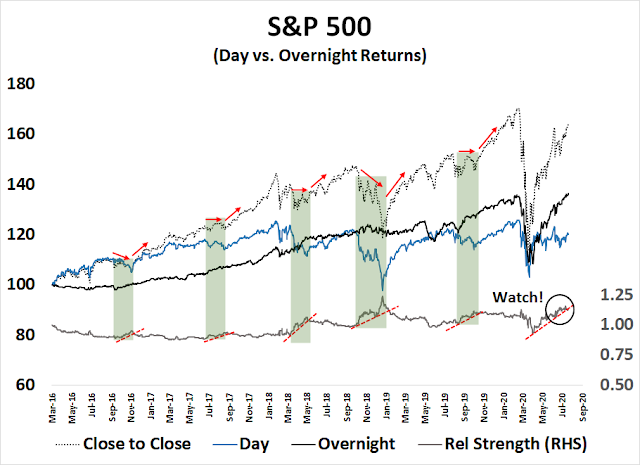 You can tell a lot about market psychology when it responds to news. Over the weekend, the European Union agreed to a €750bn Recovery Fund after a marathon summit. Former ECB vice president Vitor Constâncio described in superlative terms as historic, unprecedented, and essential. One of the weaknesses of the euro common currency was monetary integration without fiscal integration. While is is not perfect, this Recovery Fund is the first step towards EU fiscal integration, which is extremely positive news for the European Project.

This was very good news, but the market reaction was disappointing. The Euro STOXX 50 roared upwards out of the gate on Tuesday morning after the announcement, but it slowly weakened over the day and traded sideways Wednesday. The euro exchange rate did a bit better. It rallied strongly on Tuesday, but retraced some of its gains Wednesday.

The market’s reaction to the good news from Europe could be seen as a sign of a lack of risk appetite, which is bearish. However, other market reactions were confusing, which I interpret as signs of indecision.

As an example, the news that the State Department ordered China to close its Houston consulate in 72 hours was a shocker, and a sign of deteriorating Sino-American relations. The Chinese yuan weakened in response, the Hang Seng closed poorly, and overnight ES futures sold off. But the US stock market shrugged off the news to open in the green.

Today, we have the following seemingly contradictory cross-asset market signals:

I outlined how the US is facing an economy cliff as the CARES Act stimulus expires at the end of July, and the deadline for states to re-program their computers for any new payment schemes is July 25 (see Earnings Monitor: Waiting for Congress). The situation looks dire, with eviction moratoriums expiring, a survey by Apartment List revealed that 32% of American households missed their July housing payments. 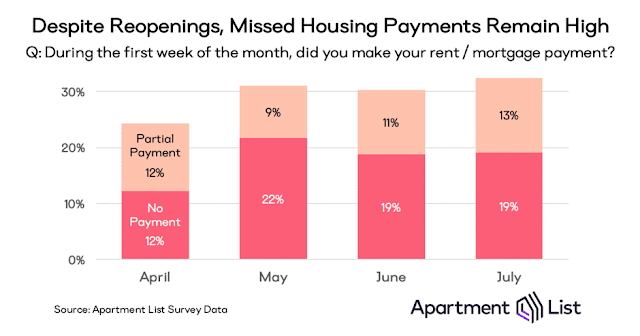 While I have no doubt that lawmakers understand the gravity of the situation and both sides of the aisle are working diligently to come to an agreement on a rescue package, time is not on their side. The White House and Republican Senators cannot even come to an agreement. CNBC reported that Republican House leader believes that legislation will not be forthcoming until early August, which is after the deadline expires.

The top Democrat and Republican in the House cast doubt Tuesday on whether Congress can pass a coronavirus relief bill in time to avoid disrupting a key financial lifeline.

“I envision that this bill doesn’t get done by the end of July,” House Minority Leader Kevin McCarthy, R-Calif., told CNBC’s “Squawk Box.” He said he expects Congress to approve legislation “probably in the first week of August.”

If lawmakers cannot pass a plan by the end of the month, a $600 per week federal unemployment insurance benefit buoying millions of Americans will at least temporarily expire. The GOP wants to change the policy or reduce the sum, while Democrats hope to extend the assistance as the unemployment rate stands above 11%.

In light of the high level of event risk, and indecisive market action, my inner trader has opted to stand aside. Do all the technical and sentiment analysis that you want, but there is a high risk that unexpected headlines can sideswipe a trading position.

37 thoughts on “A market in transition”