Earnings Monitor: Waiting for Congress – Humble Student of the Markets

The bottom-up consensus forward 12-month estimate rose 0.51% last week The market is trading at a forward P/E of 22.3, which is well ahead of historical norms. 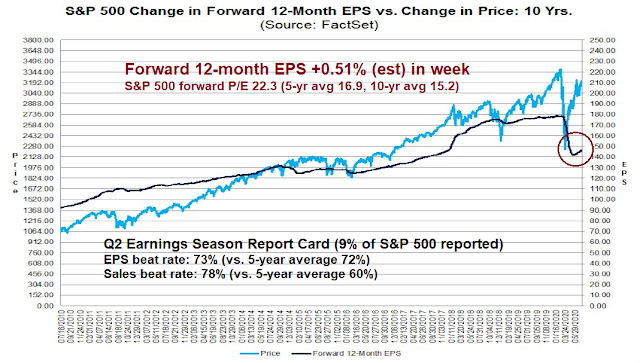 A detailed analysis of quarterly EPS estimates shows a consensus for a V-shaped rebound. Though these trends can be noisy, weekly revisions indicate that the Street had dramatically upgraded Q2 EPS estimates, but reduced H2 estimates. The trend in revisions for 2021 quarterly estimates was mixed. 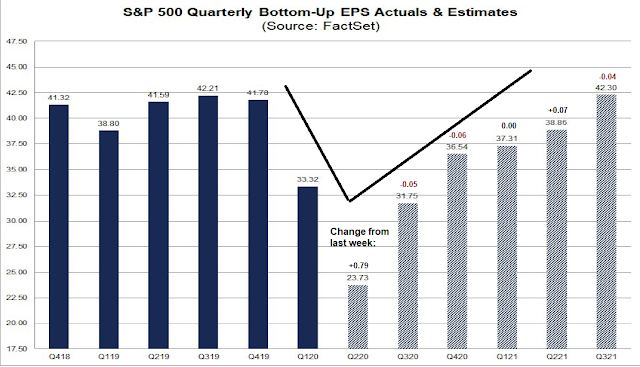 The main theme of earnings calls is uncertainty. As an example, CNBC reported that JPMorgan Chase CEO Jamie Dimon remarked that the outlook depends mainly on the course of the pandemic.

“The word unprecedented is rarely used properly,” Dimon said this week after JPMorgan reported second-quarter earnings. “This time, it’s being used properly. It’s unprecedented what’s going on around the world, and obviously Covid itself is a main attribute.”

The economy would be in shambles without the safety net of the CARES Act.

That’s because the $2.2 trillion CARES Act injected billions of dollars into households and businesses, masking the impact of widespread closures. As key components of that law begin to phase out, the true pain may begin. As many as 25.6 million Americans will lose enhanced unemployment benefits by the end of July, and it’s unclear if Congress will extend the $600 per week in additional payments that has buoyed so many households.

“In a normal recession unemployment goes up, delinquencies go up, charge-offs go up, home prices go down; none of that’s true here,” Dimon said. “Savings are up, incomes are up, home prices are up. So you will see the effect of this recession; you’re just not going to see it right away because of all the stimulus.”

The bank has provided forbearance on 1.7 million accounts; so far, more than half of credit card and mortgage customers in the programs have made at least one monthly payment. But these vulnerable customers could stop paying altogether as their federal benefits lapse.

The New York Times summarized the views of other CEOs. All had similar cautious outlooks.

“I’m less optimistic today than I was 30 days ago,” said Arne Sorenson, chief executive of Marriott International. “The virus is in so many different markets of the United States.”

“Most C.E.O.s today believe that until there is a more effective treatment or a vaccine, that work and life are not going to go back to normal,” said Julie Sweet, chief executive of Accenture.

Ms. Sweet said even in Europe, where the virus is largely under control, business leaders are anticipating flare-ups that could disrupt the economy again. “In Europe, we have clients saying, ‘We want you back,’ and in the next breath saying, ‘Of course, that will change,’” she said.

“It’s going to be one step forward, two steps back,” said Julia Hartz, chief executive of Eventbrite, the ticketing website.

There is a general feeling that Congress needs to act.

Rich Lesser, the chief executive of Boston Consulting Group, argued that it was imperative for Congress to provide more relief for the most vulnerable members of society, particularly essential workers, the elderly and those with compromised immune systems.

“Without the federal government doing something, we will miss the window,” Mr. Lesser said, adding that the virus was spreading rapidly and becoming entrenched in communities. “We need the government to say we are focused on protecting the vulnerable. If we wait to September, it will be too late.”

Mr. Sorenson of Marriott and Mr. Bastian of Delta — both of whom have large workforces vulnerable to buyouts, furloughs or layoffs if the economy does not recover swiftly — called for the expansion of unemployment coverage.

And Ms. Hartz of Eventbrite said that she wanted to see more support for small businesses.

“Something is going to have to give,” she said. “If there is not federal relief that is usable and tuned to the needs of these small businesses, they’ll go out of business.”

The elephant in the room

The elephant in the room of the earnings outlook is what happens when the fiscal support from CARES Act expires at the end of July. If Congress were to pass an additional stimulus bill, the soft deadline for state governments to re-program their computers is July 25, which is less than a week away. A Bloomberg article outlined the timeline for an economic crash landing if Congress doesn’t act. 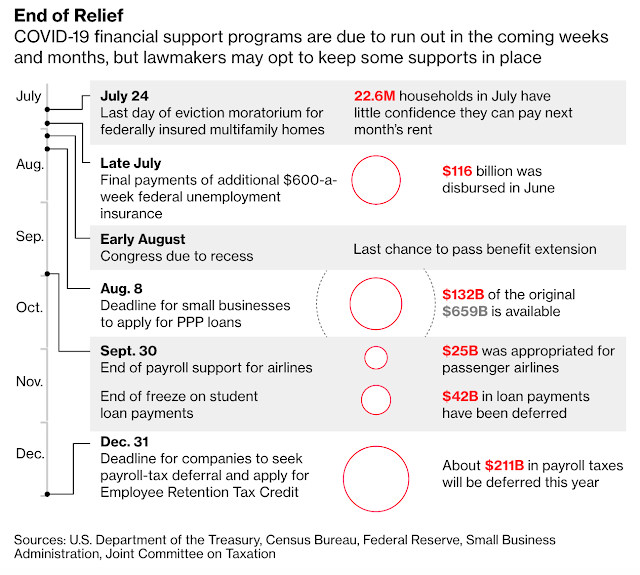 The Washington Post reported that the White House has outlined its wish list of a payroll tax cut and business liability protection.

President Trump sought to draw a hard line on the coronavirus relief bill Sunday, saying it must include a payroll tax cut and liability protections for businesses, as lawmakers prepare to plunge into negotiations over unemployment benefits and other key provisions in coming days.

The Republicans have yet to present a united front in negotiations. The leadership has been found it difficult to persuade conservatives to sign on to extra spending. As well, CNBC reported that Senate Republicans are pushing back on a Trump proposal to cut back funding for virus testing.

The White House is trying to block billions of dollars for coronavirus testing and contact tracing in the upcoming stimulus relief bill, two Republican sources told NBC News, even as infections surge across the country and Americans face long wait times to receive test results amid high demand.

Senate GOP lawmakers, in a break with the administration, are pushing back and trying to keep the money for testing and tracing in the bill, the sources told NBC News. Some White House officials reportedly believe new money shouldn’t be allocated for testing because previous funds remain unspent.

Democrats in the House had already passed a $3 trillion relief bill, with very different priorities. In general, the Democrats’ approach can be summarized as creating a stronger safety net. The Republicans believe the current CARES Act creates too many incentives for people to stay home on unemployment, and their relief proposals focuses on limited spending and more incentives to return to work.

Can both sides come to an agreement in time?

Numerous economists and think tanks have warned about the dire effects of an abrupt stop in fiscal support. Former Obama economic advisor Jason Furman projected a further -2.5% reduction in H2 2020 GDP and 2 million additional jobs lost if the expanded unemployment insurance benefits were to expire. While he doesn’t directly come out and say it, a -2.5% decline in GDP amounts to a double-dip recession. It would also upend the Wall Street consensus of a V-shaped rebound in quarterly EPS.

The abrupt expiration of any form of expanded unemployment insurance at the end of July 2020 would create problems both for the workers directly affected and for the economy as a whole, reducing GDP by about 2.5 percent in the second half of 2020—more than a typical year’s worth of economic growth. 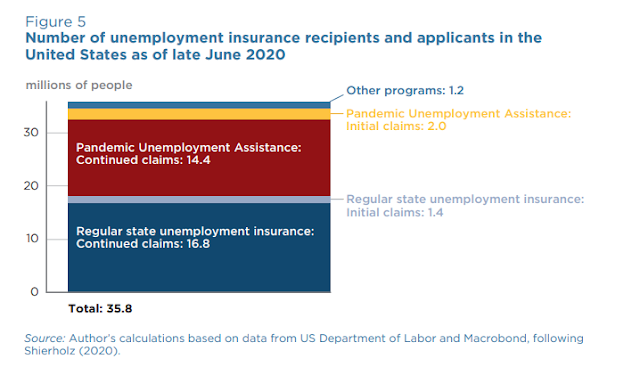 The Chicago Booth School conducted a survey of academic economists through its IGM Forum, and all agreed with the following three propositions.

To be sure, some respondents were “unclear” about the propositions, though none disagreed. Posturing aside, these propositions form some realistic principles of relief policy design.

Will Congress listen? Legislators have a lot of work to do. Decisions in Washington in the next week could create a lot of event risk to the H2 earnings outlook.