Earnings Monitor: Stabilization and hope – Humble Student of the Markets

We are continuing our coverage of earnings season during these turbulent times. Last week, we highlighted the disconnect between earnings expectations and valuation (see Earnings Monitor: Reality bites). This week, we are seeing greater signs of stabilization, and hope for the future.

Let’s begin with the big picture. FactSet reported that the bottom-up consensus forward 12-month estimate fell -1.4% last week (vs. -1.9% the previous week), and -19.5% since downgrades began eight weeks ago. The EPS and sales beat rates were both below their 5-year historical averages. 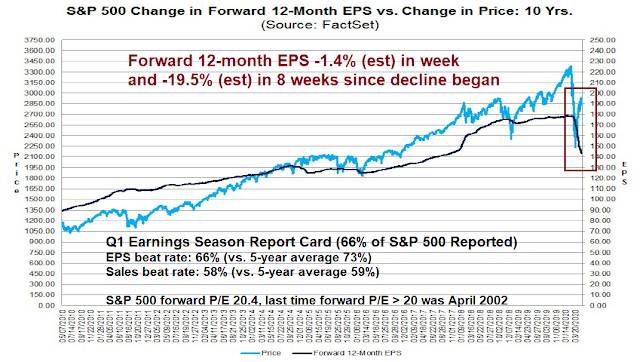 For the bottom-up view of operating conditions, here is the latest from The Transcript, which monitors and summarizes earnings calls.

Succinct Summary: Companies are reporting signs of improvement in the economy. But the rebound is coming off such a low base that these numbers would still be considered very bad in any other environment. The duration of this rebound will depend heavily on whether or not there’s a second wave of infections. Still, even without the virus it probably will take the economy a long time to recover from such a severe shock.

On an industry basis: private capital markets are searching for price levels; consumers are dreaming of the future; tech is chugging along; and the industrial/energy economy is feeling immense pain.

The good news is the decline is stabilizing and exhibiting some signs of growth. The bad news is the absolute levels are still horrendous. As an example, Hilton’s global occupancy improved from 13% to 21%.

But when business was down 90%, -80% looks good
“Week-to-week comparisons showed a third consecutive increase in room demand, which provides further hope that early-April was the performance bottom. TSA checkpoint numbers, up for the second week in a row, aligned with this rise in hotel guest activity, which still remains incredibly low in the big picture. Overall, these last few weeks can be filed under the ‘less bad’ category ” – STR Senior VP of Lodging Insights Jan Freitag

“In addition, we are starting to see double-digit increases in digital traffic and booking activity across all segments. Global occupancy levels have gone from a low point of 13% to 23% currently. Assuming we start to see mobility and we don’t have a significant recurrence, demand should slowly rebuild in the third quarter.” – Hilton (HLT) CEO Chris Nassetta

As different jurisdictions reopen their economies, much will depend on whether there will be a second wave of infections.

The recovery will depend heavily on whether or not there is a second wave
…”hopefully, we will not have a second wave but…requiring to go back to sheltering place…would be the largest risk that we’re seeing because…the factories will be shut down, the demand would be low…That I see as the biggest risk.” – Microchip (MCHP) CEO Steve Sanghi

“I fear 2Ws. W number one is war..my second W is the second wave…If I look to the economic consequences of all that, clearly even without the two Ws, I think we have the most unpreceded economic crisis that we have seen in peacetime, and the damage that is inflicting in our economies around the world is really causing damage to families, to jobs, to the capacity to bounce back, and we simply have no real good sense of how badly economies are affected” – European Central Bank (ECB) President Christine Lagarde

We have all heard about the joke that it’s a recession when your neighbor loses his job, and it’s a depression when you lose your job. This was starkly illustrated by the April Jobs Report. Non-farm payroll fell by -20.5 million. Lost in the initial shock of the report was the surge in average hourly earnings, which can be explained by the concentration of job losses in lower paid workers. 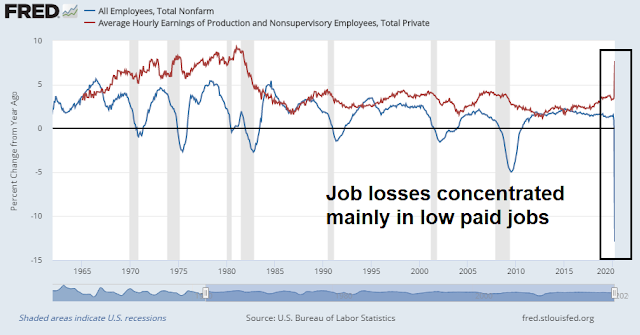 While this could pivot to a discussion on gaping inequality during this crisis, I do not believe it is appropriate to detour into politics during investment analysis. Nevertheless, it is difficult to believe that average hourly earnings will not converge towards the rate of job losses, rather than the other way around. I recently discussed the vulnerability of small businesses, which operate mainly in the low margin, high volume segment, and not well capitalized. How long can they endure cratering sales?

Bloomberg recently reported that defaults are rising, but many default events are showing up under the radar because of distressed debt exchanges:

The worst recession since the Great Depression is prompting indebted companies to default, and increasingly more will do so in a way that’s harder for investors to detect.

Rating firms predict that more companies will pursue distressed debt exchanges, in which they try to overcome liquidity problems by swapping debt or buying it back at steep discounts. Such moves are less stark than missed payments and can fly under the radar for the general investing public, but often result in losses for creditors and are usually counted as defaults by rating companies…

“Distressed exchanges often are just ‘bandages’ and the firm eventually goes bankrupt,” said Edward Altman, a professor emeritus at New York University’s Stern School of Business and director of credit and debt market research at the NYU Salomon Center. Altman, who developed a widely used method called the Z-score for predicting business failures, estimates that up to 40% of distressed exchanges end in bankruptcy within three years.

The pandemic is driving a surge in distressed debt in the obvious sectors. When will the next shoe drop? 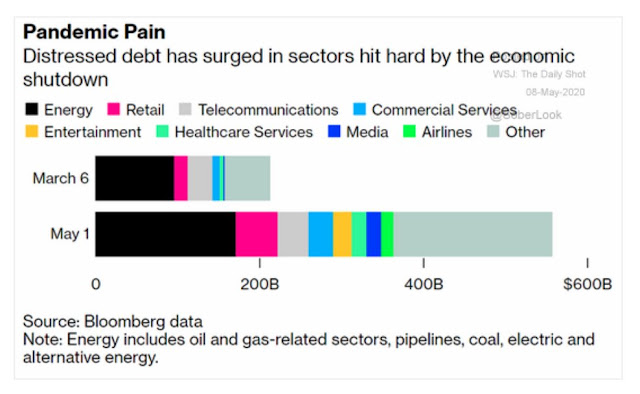 The relative performance of bank stocks is already anticipating a wave of financial distress. So far, the market has been held up by the perception of Fed’s support, but the Fed cannot supply equity to companies that have gone bankrupt. Will this cycle be any different from past cycles? 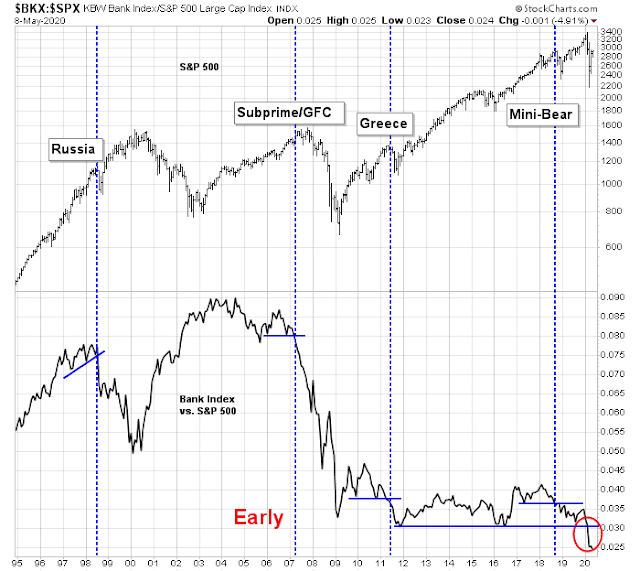 In the meantime, valuations are still challenging. FactSet reported that the market is trading at a forward P/E ratio of 20.4. The last time the market traded at these levels was in 2002, when it deflated from the dot-com bubble. 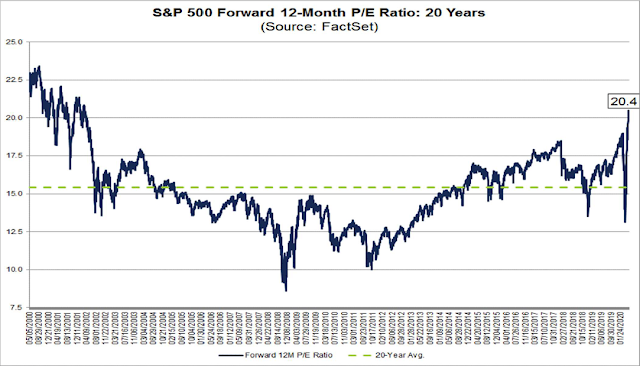 Much depends on the relationship between valuation and expected growth. I hate to quote the perennially bearish Albert Edwards, but he has a point about the PEG, or P/E to Growth ratio, as reported by Marketwatch:

Yes, the Société Générale economist who refers to himself as an “uber bear,” once again, lived up to his self-billing in his gloomy note to clients on Thursday.

“We are in the midst of a monetary and fiscal ideological revolution. Nose-bleed equity valuations are being supported by nothing more than a belief that a new ideology can deliver,” he wrote. “Meanwhile the gap between the reality on the ground and expectations grows wider.” 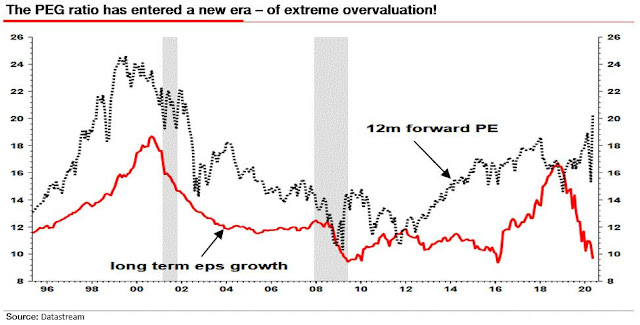 As the market rallies, I am seeing an increasing number of articles and observations that investors are in a win-win situation. If the reopening is successful, the growth outlook improves; if it’s unsuccessful, the Fed has your back. Investors can’t lose.

I reiterate my view that there are limits to the Fed’s support. The Fed can supply liquidity to the markets in order to compress risk premiums, but it cannot supply equity if firms were to fail. Investors should be mindful of the risks embedded in market pricing, especially in view of the highly stretched nature of valuations.