Time to sound the all-clear? – Humble Student of the Markets 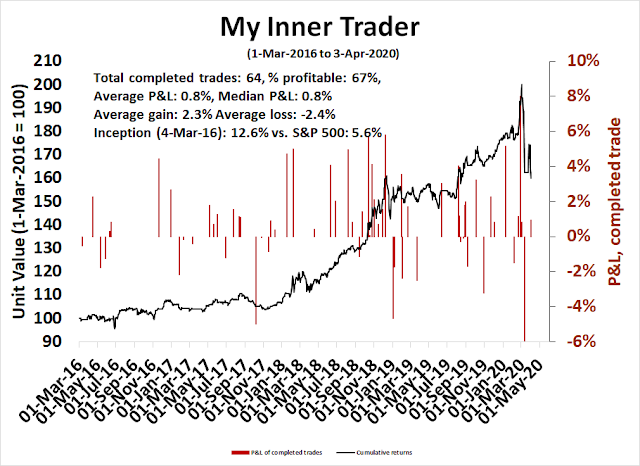 Urban Carmel made an interesting point last Friday. Despite a string of ugly macro news, the market has not made new lows. 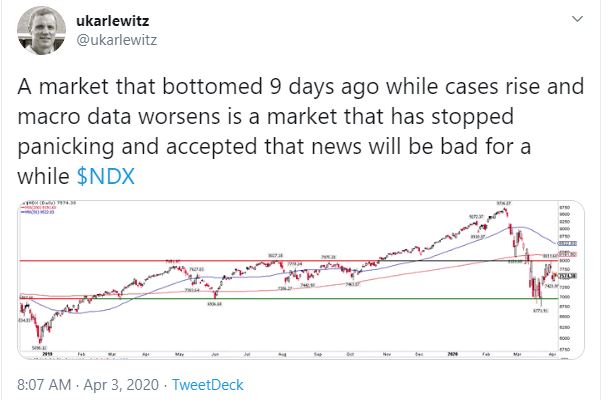 Does that mean it’s time to sound the all-clear for the stock market?

A look at sentiment

Let’s start by analyzing the long-term outlook from a sentiment perspective. Both Marketwatch and Bloomberg reported that an RBC survey of institutional equity investors conducted betweent March 25 and March 31 indicate a surprising level of bullishness. Capitulation has not occurred yet, and the market is therefore vulnerable to negative surprises.

Even as the spread of COVID-19 accelerates in many regions of the U.S., institutional investors are becoming ever more bullish about the prospects for the stock market, according to a survey released Thursday by RBC Capital Markets.

“Our respondents are highly bullish on stocks, the most optimistic they’ve been since we started our survey in the first quarter of 2018,” wrote Lori Calvasina, head of U.S. equity strategy at RBC Capital Markets.

She said that the survey respondents provided three reasons for optimism, including attractive valuations, faith in the Federal Reserve to take actions necessary to support the economy and “a belief that the economic damage from the public health crisis will be manageable.” 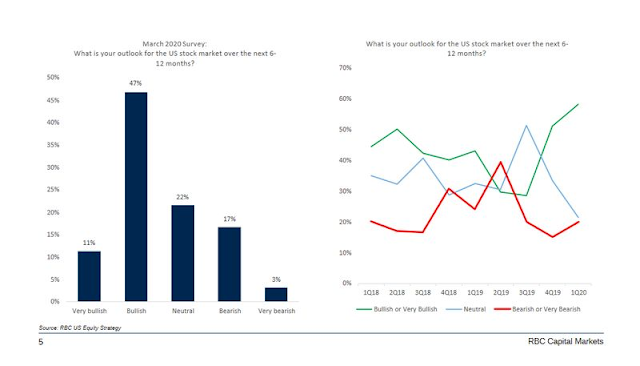 What about retail sentiment? I prefer to monitor monthly AAII Asset Allocation Survey, which measures what AAII members are actually doing with their money, as opposed to the weekly survey, which measures opinions. The asset allocation survey shows that while equity allocations have fallen and cash allocations have shot up, readings are not at the extreme levels seen at past major market bottoms. In addition, anecdotal evidence from different sources shows that retail investors are not panicked at all. Instead, they are open to putting new cash into equities. That’s simply not how sentiment at major market bottoms behaves. 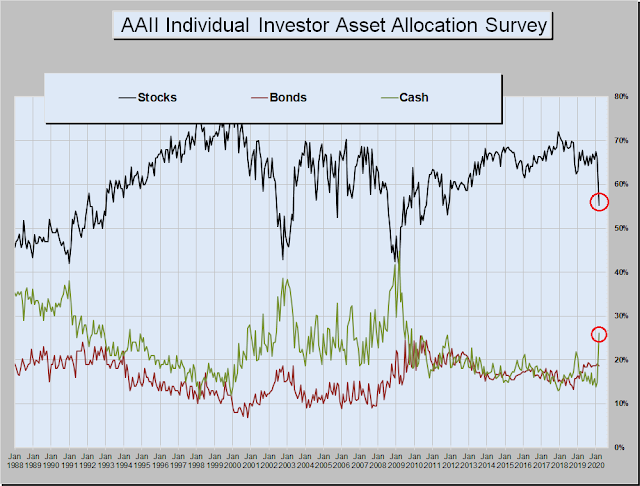 As well, the stock market’s relief rally stalled last week just short of its first Fibonacci retracement level, while the Fear and Greed Index recovered off an extreme fear condition to 21. These conditions are more consistent with a short-term relief bear market rally than a major market bottom. 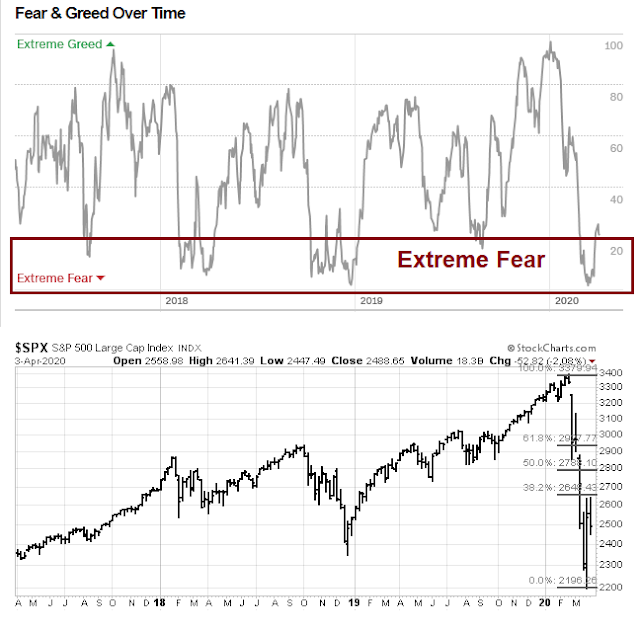 What about the bond market? While credit conditions have tightened, investor appetite for bonds is still healthy. There have been 27 different issuers since March 1, including a cruise line. Most investment grade issuers are borrowing at the long end, at a cost of around 3%. 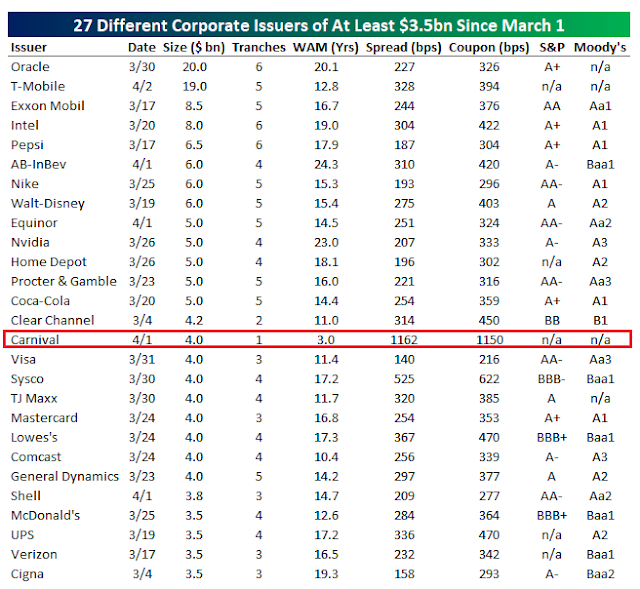 These are not the signs of blind panic that are found at major market bottoms.

FactSet reported that the market is trading at a forward P/E multiple of 15.3, which sounds reasonable at first glance, though it’s not wildly cheap. However, the E in the forward P/E ratio been falling rapidly, and it skidded -7.2% in only three weeks. 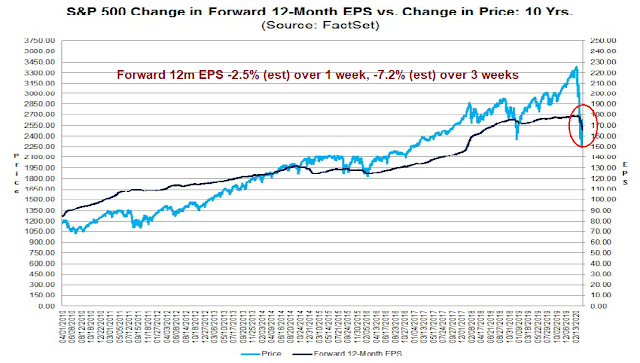 Investors can expect the negative EPS estimate momentum to continue. While the pace of quarterly earnings downgrades is ugly, it has not even beaten the pace set in Q1 2016, which was not even a recession. In addition, the rate of Q1 negative guidance is only roughly in line with historical experience, and bottom-up aggregated analyst price targets call for 12-month price target gain of 33%. 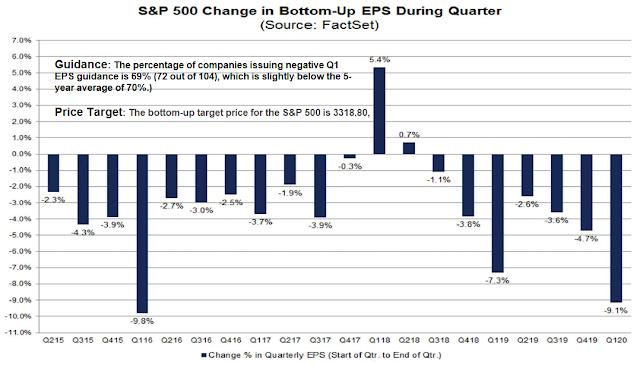 Q1 earnings season is just about to begin. While Q1 earnings may not be that bad because they represent stale data, corporate guidance is likely to be very negative. Based on the current rate of negative guidance and aggregated price targets, Street expectations are overly ambitious and need to be further adjusted downwards.

While FactSet’s analysis is from a company bottom-up aggregated perspective, the top-down view is also supportive of my case for further downside before the market can make a durable long-term bottom. A reader pointed out that Ed Yardeni has cut his 2020 S&P 500 EPS estimates to $120, and his 2021 estimates to $150. A brief survey of other Street strategists indicate that Yardeni’s forecast is about the consensus. Consider what this means using our handy forward 12-month P/E analytical technique:

Still ugly any way you look at it.

In the shorter term, the market’s technical internals present a mixed bag. My recent favorite directional indicator, the high beta to low volatility ratio, has flattened out, indicating indecision. 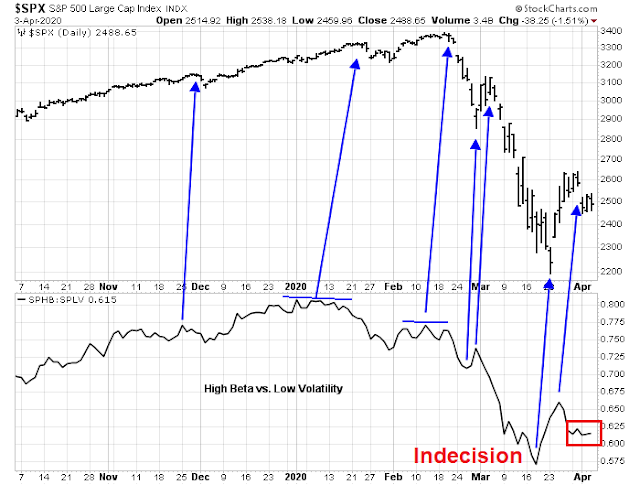 I had expressed concern in the past that the offshore USD shortage presents a risk to EM stability. The latest indicators of EM market risk appetite is also inconclusive.

The coronavirus pairs of global airlines to Chinese healthcare, and Royal Caribbean (cruise line) to Service Corp (funeral homes) are falling, indicating a risk-off environment, though airline stocks did exhibit a minor rebound on Friday. However, the disclosure after the close that Warren Buffett was selling his airline holdings is unlikely to be supportive of further strength in this pair. 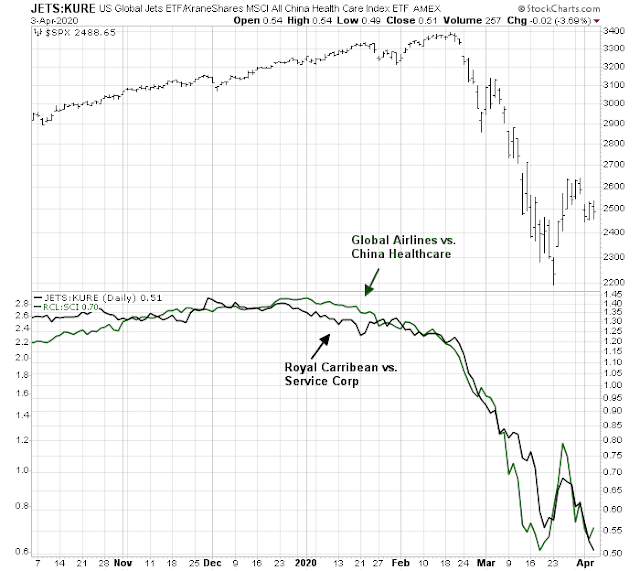 What about the oil price? Could a cessation in the oil price war spark a stock market rally, or at least put a floor on stock prices? The relative performance of energy stocks displayed a strong dead-cat bounce quality from an extremely oversold condition, and there is potential for more upside from this beaten up sector.

On the other hand, the energy sector is now the second smallest sector in the index at 2.6%. A 10% rally in these stocks would only move the index by 0.26%. A double translates to a rally of only 2.6%, everything else being equal. 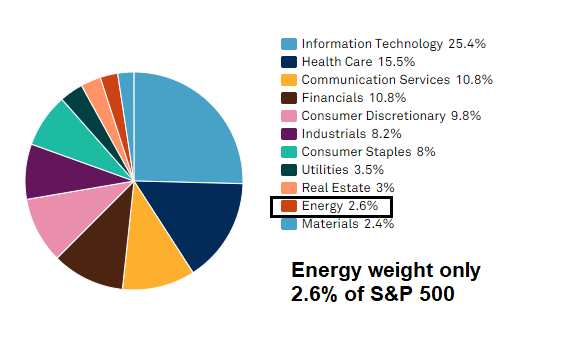 To be sure, there are signs of stabilization in the market, which is constructive. Not only is the VIX Index falling, TYVIX, which measures bond market volatility, is falling in lockstep. As well, the term structure of the VIX futures curve is beginning to normalize. The 9-day to 1-month VIX ratio has moved from an inverted condition to flat, and the 1-month to 3-month ratio is also flattening. All of these readings indicate that market psychology is transitioning from utter panic to a greater calm. 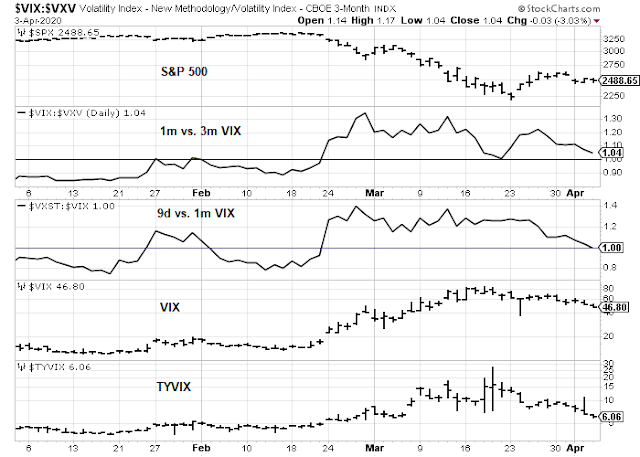 As well, fund flows are starting to normalize. After a bout of panicked selling, investors are tip toeing back into equities and bonds again. 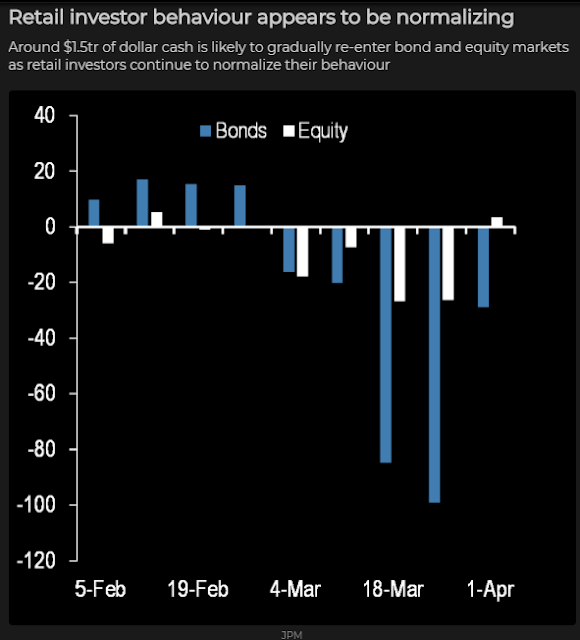 Where does that leave us? The hourly S&P 500 chart tells the story. The index staged a relief rally by breaking out of a falling trend line, but the rally stalled at 2650. It then gapped down to find support at 2450. The bulls could not rally the market above resistance at 2530 to fill the gap at 2530-2580. On the other hand, the bears could not break support at 2450, whose violation should see the gap at 2250-2350 filled quickly.

It’s time for the market to give us some clues on further short-term direction. While I am leaning bearish, we need to see a decisive breakout from the recent trading range of 2450-2530 for further clues. My base case scenario calls for a choppy range-bound market for the next few weeks. While the market may decline to test the March lows at about 2200 and the relief rally high at 2650, neither the bulls nor the bears will be able to break the deadlock.

Short-term breadth is neutral, but momentum is negative. The odds favor further downside in the next few days, but don’t get too greedy and count on a break of major support. 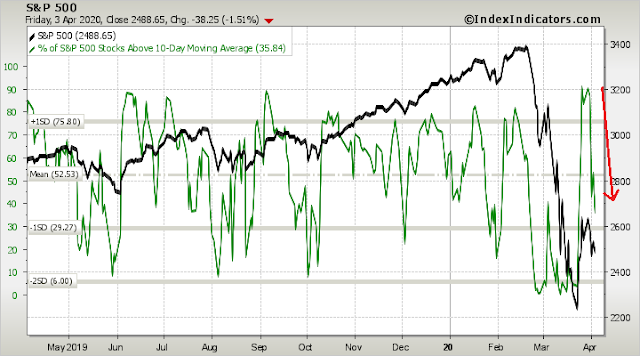 78 thoughts on “Time to sound the all-clear?”